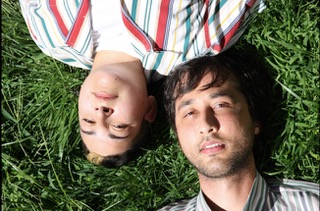 Last year’s Twin Flame, the debut record from California’s Oka Sun, is very possibly the single most underrated record to have come out in all of 2021. It is a gorgeous, layered, orchestral masterpiece of an album, such a fully realized example of an artist’s vision it’s hard to believe it’s the duo’s first full-length. There are hints of bands like Copeland, Bedouine, or maybe Why Bonnie, but there’s a smoky folk rock edge to Twin Flame that’s all Oka Sun’s own.

A case in point is “The Flood,” the five-minute track that blossoms into being after the introductory opener “The Storm.” It’s light and it’s breezy, but it’s equally as dense. Cinematic strings burst in, along with galloping drums and soaring vocal melodies–it’s a truly beautiful song, and today we’re excited to bring you an exclusive premiere of its music video, the first-ever Oka Sun video. The band shares that

The video conceptualizes this fantasy realism world where our lead Dancer (played by Ana Christina) slowly turns into a marble doll. To match the underlying tones of “The Flood,” we wanted to personify this looming sense of guilt that comes from going against the grain of expectation. The story explores the idea of giving oneself permission to be who they are, regardless of whether that makes them good or bad.

Twin Flame is out now.