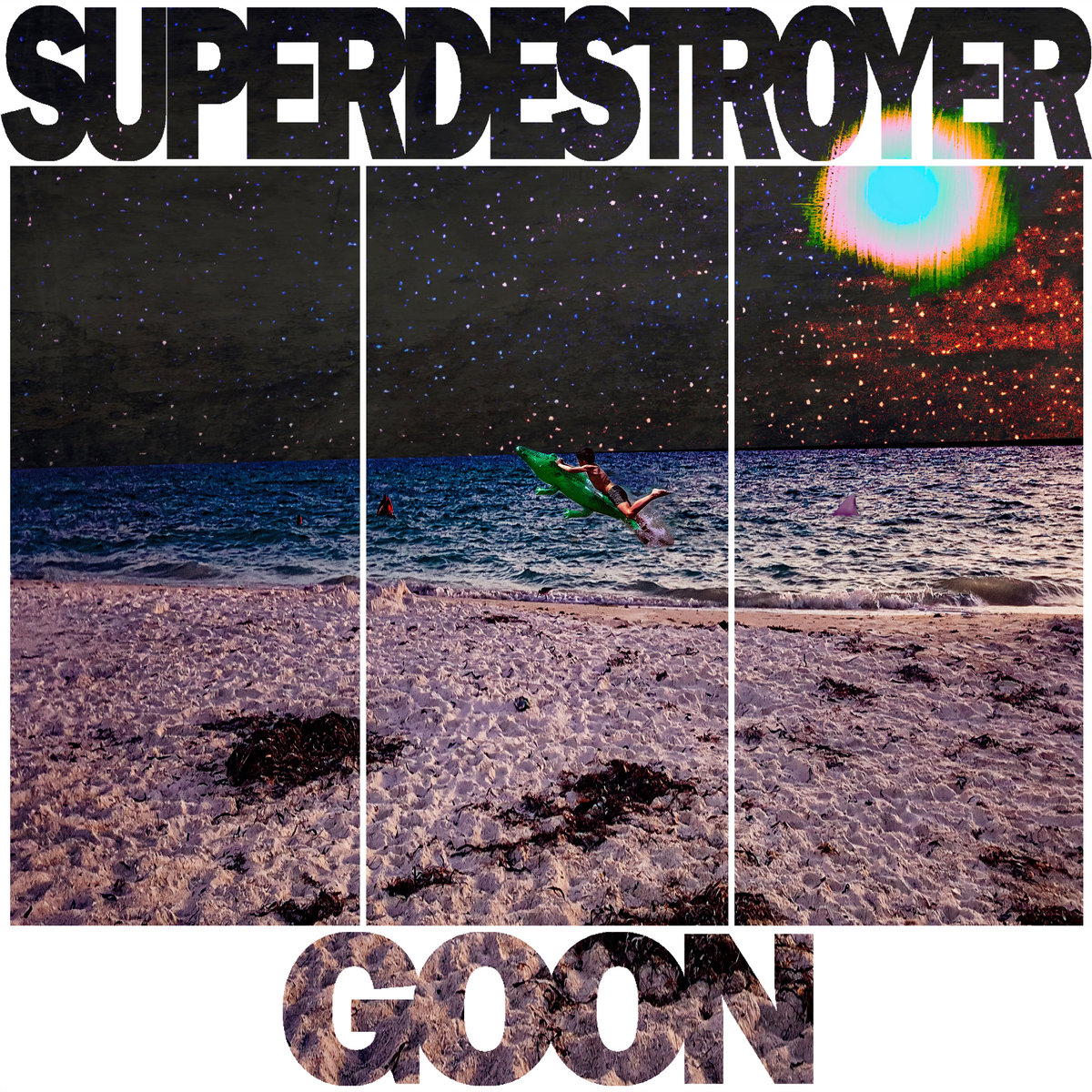 One of the most intriguing aspects of Superdestroyer’s music it its unpredictability—you never really know what to expect when approaching one of his records for the first time. There are common ideas like the way the songs seem to grow out from a center instead of moving forward linearly, with layers pushing the songs out in every direction from the original idea, or the way the lyrics float around modern anxieties and carry a sense of doom, but each album has its own distinct mood and expression of those anxieties. Released at the start of the year In Your Loneliness, Your Holiness was a lightning-quick explosion of fuzz and psychedelia, as melodic as it was chaotic. His second record this year, GOON (out a few weeks ago), allows the tunes a little more room to breathe, giving it a more ruminative mood—even as the album is littered with heavier moments amidst the more spaced out synths and guitar riffs. Songs like “Blood Blooms” show off Superdestroyer’s ability to play with a simple musical idea, allowing it to simmer while adding various ideas on top and transforming the original expression. “Death Mask,” takes its time too, while songs like “FKA Still Chill” and “Sinking” are quick bursts with some of the album’s heavier guitar sounds.

Superdestroyer broke down the record for us, going through the tracks in the order he wrote them for the record. Check it out below and hop over to Lonely Ghost Records for tapes, including a badass dual cassette with GOON on one side and Gutless’ fantastic Build and Burn on the other.

I wrote the main riff of this song while hanging out with a friend at like 1 am and that led to the rest of GOON. Once I wrote Beach Curse, I knew I wanted this album to have a beachy sound mixed with elements of heavier fuzzy rock. After I recorded the song, it was pretty obvious that Caleb (Hey, Ily) should do that harsh part. I love that distorted high-energy chaos his voice brings to a song and it really brought the song together and gave it the dynamic energy I was looking for. This song also made me realize that I wanted synth to play a really big role in this album and that I wanted to make this album about a family trip to the beach gone awry.  I was so stoked when we signed Hey, Ily and it’s been really awesome collaborating on stuff with Caleb this year. They put out Psychokinetic Love Songs in April and everyone needs to hear that album.

I began writing this song the same day I finished recording Beach Curse. At the time I had been listening to a lot of 90’s grunge and I wanted to juxtapose that against the airier beachy sounds I was beginning to play around with. I think it’s a fun contrast that actually sounds pretty cool together. I added the synth because I really like to give my songs a lot of texture. I approach most songs more similar to the way one might compose electronic ambient music. I think the synth contributes a sort of “sloshing” feeling to the song–like waves crashing atop a cold calm ocean. I think it gives the song a tumultuous vibe that fits well with the lyrics.

The day I recorded this song I had already finished writing and recording the end of Beach Curse and the skeleton of Sinking before I even began writing this. Generally I write songs in real time by just sort of jamming with myself and trying things out while I record until I like it. Then, I go back to revise and re-record after I get some distance. This song is very indicative of that process because the palindrome structure, glitchy textural synths, and tempo changes all came from that initial day of writing/recording, but I probably spent 50 hours messing around with smaller details. I knew I wanted Blake from New You to sing the verse because New You was a big inspiration for the vocal melody I had written and Analogue Heart just so happened to send me a demo with these super badass gutturals at a time when I was looking to put some gutturals on the end of the song. I almost cut this song because I wasn’t sure if I would finish it in a way that I liked, but it ended up coming together because the features were great. Analogue Heart is working on some really crazy stuff and is a project everyone should be keeping an eye on, and New You are up-and-coming rock Gods. That band is insanely good.

I recorded Blood Blooms and I Will Die on the same day and I think Blood Blooms came first. I love writing guitar loops that I can build on, so this whole song was built around the guitar. I used a Kaosilator to make the loops and then kept on building after that. The instrumental might have been the first one totally completed, but this was the last song on the album that I finished. Those vocals were written and recorded maybe 3 days before I sent the album to Kris to be mastered. I must have tried out 40 versions of lyrics and vocals for this song before I landed on the ones I went with. I wanted the lyrics to be honest without being too dark which took a while to get right. Also shout out to Catching zzz’s and Anusha who are 2 great RnB artists who I originally wanted to have on this song. It just ended up changing too much from the original idea. People should definitely check those projects out. I’m still hoping to record a song with them eventually.

This is actually the oldest song on the album. I wrote this song for a scrapped album back in 2019 but it sounded a lot different. I always liked the song, but I knew it wasn’t really done. Once I realized how weird this album was becoming, I thought I should revisit this song. Initially it was going to be an instrumental for Father of the Year, but he didn’t think it fit what we were working on, so I asked if I could have it. It’s built on a synth loop he brought over. I compressed drums against the synth line so that the drums triggered different parts of the riff and I turned that into the foundation of the song. I decided to ask Gregory (Oldphone) to see what they could come up with on guitar. As soon as I heard what they did I knew that was it. Oldphone is an amazing project. It’s hyper-emo and they’re the only person I’ve really heard doing that. Definitely check out oldphone!

“I Will Die Right Here On This Beach”

I wrote this one by making loops on the kaossilator as well, but this one was originally intended to be more “acoustic.” Of course, I ruined that idea immediately by adding synths, but I’m glad I did because I think the synth textures in this song are my favorite on the album. But that’s why I decided to omit a bassline and keep the drums minimalistic. They actually mirrored a chant of “I WILL DIE RIGHT HERE ON THIS BEACH” which I originally had planned to put as part of the beat, but it was too much with all the other textures. Lyrically, this song really brings everything together thematically and sets the stage for Sad Mosh Pit.  This might be my favorite song on the album now, I just think it’s a pretty sounding song.

This was one of the last songs I recorded for the album, however, lyrically I think it was the second song written after Beach Curse. I think the lyrics summarize a lot of the conflicts and tensions of the album and provide the thesis statement. This song helped me flesh out the rest of the album. This song sonically is very textural but in a way that is more subtle than some of the others which I thought would be a good way to wind down the album. Also, I hope people enjoy that drop in the song!

“We Don’t Have the Benefits of Time Travel”

Originally, I started writing this song for a different album, but it didn’t fit. I liked the direction the song was heading though, so I decided to keep working on it once I realized that it’d fit well with this album. I actually recorded a whole other version of this song with some drums and vocals, but Nelson (Leave Nelson B) said he really liked the electronic drums so I decided to keep those instead and lean into the ambient aspects of the song. I wanted to make the album sound like the ocean and I think this song ended up setting that tone pretty nicely. Also, that Father of the Year sample at the beginning is just really cool and I love that the album starts with that clip.