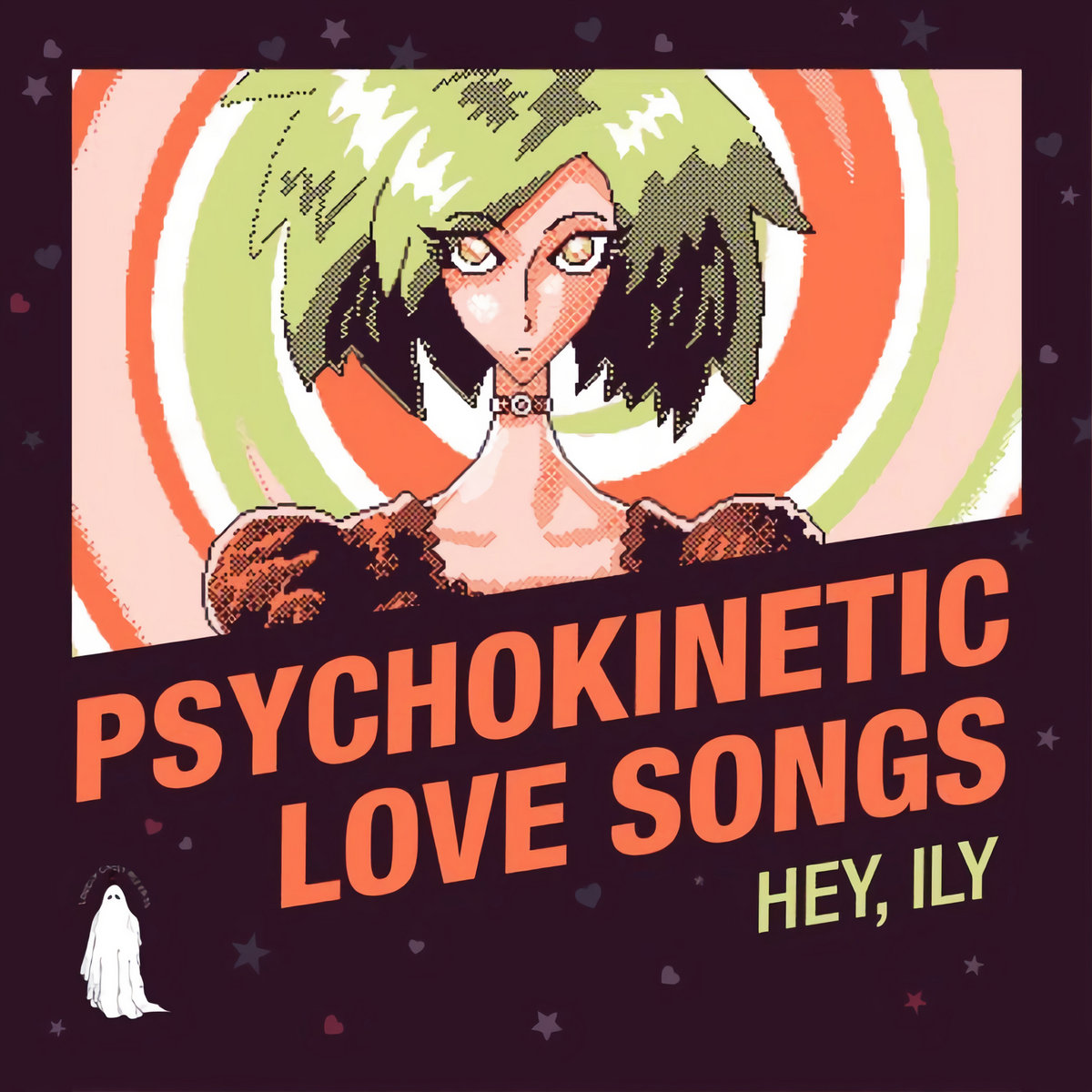 There’s a buzzing energy that pulsates through Hey, Ily’s Psychokinetic Love Songs—a wild, but laser-focused, record that pulls from chiptune, power pop, 80s, and early 2k pop punk, with moments of thrash metal, jazz, and plenty more thrown in. After the acclaim of Internet Breath and P.S.S.U.S.S.P., there were high expectations for the group’s first full-length, and they more than rise to the occasion, delivering an album of excellent songs that are all individually impactful, but come together as a cohesive and conscious whole. While not a concept album, Psychokinetic Love Songs is one that is definitely well-served by listening to as a whole, as the group sets the record up to follow a clear arc, with the instrumental tracks marking the way, starting with “Rebooting.”

“Intrusive Thoughts Always” follows “Rebooting,” and was also one of the tracks released early along with “Stress Headache” and “Psychokinetic Love Song.” It kicks things off with a frantic energy and a piano line with tropical-island vibes, working well as a signal of what to expect from the record, as the track careens through four or five different genres before it ends. “Stress Headache” opens with an unabashedly ’80s guitar riff that immediately conjures big hair and tight leather (or, if you’re like me, the Adventureland soundtrack). The chorus of “I have a stress headache today / I tried some advil but it won’t go away / it’s worse than it was yesterday / ‘cause the world’s still crumbling” is one of the poppier and immediately catchy on the record, turning the sentiment into a fun singalong. The bridge of “I don’t want to die  / or lose my mind / the world’s crumbling / my brain’s melting” is followed by an extended and killer drum solo from Connor Haman and a perfectly 80s guitar solo joyfully called out in the vocals.

Like “Intrusive Thoughts Always,” “Psychokinetic Love Song” feels like a microcosmic representation of the macrocosm of Psychokinetic Love Songs. There are ferocious riffs under sugary melodic vocals, an earworm chorus, a jazzy diversion, and mathy elements, all before things transition into an 80s synth vibe that brings to mind countless movie scenes of protagonists walking through rundown cities at night.

“Glass House” is equally as eclectic as the three singles, with horns sprinkled throughout that take center stage for a brief waltz, while the lyrics speak to the self-doubt and stress that seem to loom over the record, with lines like “why is it so damn hard to speak? / suddenly, all my friends are scary / watching all my friendships pass me / banging on these glass walls, why can’t you hear me?” It’s followed by the instrumental “Dreaming,” which works with “Rebooting” and “Shutting Down” as signposts for the record, drawing a cinematic beauty from the synths. These tracks aren’t just instrumental interludes between the songs with words; rather, they express the same ideas and themes as the lyrical tunes in a different way, forming a calmer contrast to the more manic songs sandwiched between them and carrying over a melodic motif that creates a throughline and connects the entire record.

“Machine?” carries on the cinematic vibes that permeate so many of these tracks, feeling like the soundtrack of a futuristic nightclub in a science-fiction movie with its light, poppy melody and beat. Of course things don’t stay light forever, and the song explodes before pulling back to the more slick feel with some lead guitar added. Given the song’s themes of questioning if you are a machine or human, the science-fiction feeling fits, and the lyrics speak to the feeling of uncertainty that comes from the repetitiveness of a modern life increasingly ruled by capitalism and the digital world, as vocalist Caleb Haynes wonders “am I machine? / are my feelings programmed inside me / are destinies binary? / are we copies of copies of copies of copies  / what am I feeling? / am I really feeling anything? / remind myself that I am breathing.”

Special mention has to be given here to “The Tempest,” an instrumental track of absolutely stunning classical piano. At times breathtakingly beautiful, at others unnervingly demonic, the track seems to form a trilogy with “Machine?” and “Human!”—connecting the two and bridging their themes to create a cohesive story within the overall arc of the record. Starting with the storming mental torment of uncertainty from the previous track, a little past the two-minute mark, “The Tempest” takes a turn and things begin to feel lighter. There seems to be an answer to the question posed in the title of the previous tune. Most bands would not spend so long on such a diversion on a record, but it’s a tune that needs that much space, and all you can really do is listen in awe while you absorb the storm of emotions overflowing the entire record that seems to be pushed away in a feeling of clarity by the end of the track.

“Human!” picks things back up after “The Tempest,” offering the affirming answer arrived at in the instrumental. It starts as an insanely catchy pop-punk tune that could have spent weeks on TRL in the early 2000s, highlighted by the strummed bass under the vocals in the verse and the massive chorus of “as long as I’m human / you’ll never be alone / our interiors are never born cold / I’ll always be human / you’ll never be alone / nothing will take this from us, no.” From that point, we get more heavy riffs before a hauntingly beautiful choral interlude that blasts off into the biggest guitar solo on the record—which is saying something given how active and melodic Trevin Baker’s lead guitar playing is throughout Psychokinetic Love Songs.

After “Human!” feeling like the thematic and energetic high point of the record, “Shutting Down” allows for a moment of decompression as low, looming synths slowly build until the song explodes into the motif from “Rebooting,” this time more triumphant and celebratory—until a brief stop and flip of the tape that switches us to an almost sacred realm, as the melody comes through what is essentially a digital bell choir.

For a record with so much going on and drawing from so many different musical wells, it’s impressive the Psychokinetic Love Songs never sounds overly cluttered (there are times when a bit of clutter is surely intentional) and none of the ideas ever run into each other in a way that clashes. Every band member is playing off their heads, but it’s all in the greater service of the songs and record as a whole, and the group knows when to pack the tracks with sound and when to pull back and allow different elements and members a momentary spotlight, resulting in a fascinating and unique record.

Psychokinetic Love Songs is out today on Lonely Ghost Records.