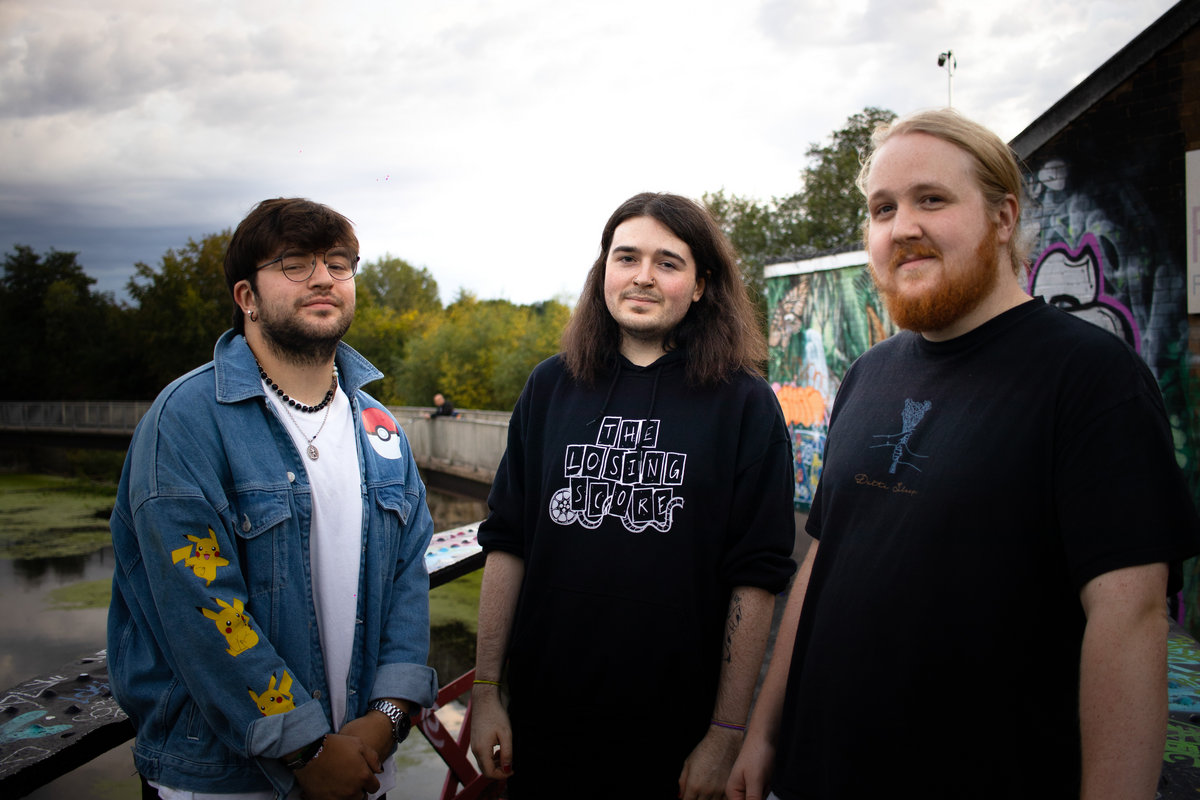 Leicester’s Pillow Fort dropped their first proper release this past October, and not a moment too soon. The band lists Modern Baseball and Free Throw as two of their formative influences, and that comes through clear as day on Words That Change in Meaning. They recently linked up with Hunk of Plastic Records for a tape run of Words That Change in Meaning, and we caught up with vocalist/guitarist Ryan Crick to discuss the EP, the band’s future, and some other bands we should be looking out for.

Pillow Fort was your solo project for a while–and some recordings of early Pillow Fort stuff are still up on Bandcamp–so when and how did you make the jump to full three-piece band?
Pillow Fort for me became a thing because I needed an ‘official’ project to write under. When I then started writing songs for a full band and wanting to play live with more than just an acoustic in hand, I didn’t have a live band to play with. I saw in Dec 2021 that Lakes, a UK emo band I’m hugely fond of, would be playing in Leicester where I’m based, and I reached out to the promoter to get a support slot – I simultaneously reached out to Sam and Isaac to ask if they’d be down for a gig or two. We started playing together, initially with them as just the live band, then eventually I stopped having to ask if they were up for ‘one more show’. The rest is history.
What song on Words That Change in Meaning are you most proud of?
For me, “This Time” is the easy answer–it’s the closest I’ve gotten to the music I like to listen to from other bands. There are aspects of every song that I’m proud of to varying degrees, but This Time holds the most meaning to me, and is generally just my favourite to play.
You mentioned on Twitter that you’re working on EP 2–how different has that writing process been versus the writing of Words That Change in Meaning?
None of the songs for either EP were written with releasing music in mind, instead they were written slowly, one after another over the course of about 3 years. In April 2022 we went in to record 8 songs, which were literally all we had, and I had barely even considered release plans. I decided the 8 songs weren’t cohesive enough for an album, and would work better released as two EPs where the first was eclectic, finding my feet in songwriting, and taking hits from every subgenre of emo you can think of, and the second is more structured, refined, and matches the sound that I now see as ‘Pillow Fort’.
If you could tour with anyone, broken up or not, alive or dead, who would it be?
Modern Baseball, absolutely no question. They were my intro to the kind of music I write and I hold all of their releases very close to my heart. My first on-stage experience was getting on up to sing “The Weekend” with them in 2017, so it would be my life coming full circle, y’know?
Are there any lesser-known bands you think we should be paying attention to?
Spank Hair are a favourite of ours–3 EPs in 2022 and not a single song misses. Our lovely pals in The Losing Score released their debut album last year and it was phenomenal, can’t wait to see where they go from here. Brutalligators are another great band to hear both live and on record–if they drop LP2 any time soon I will absolutely go wild. Over the past couple of years the UK DIY emo community has really come together–everyone’s wildly supportive and it’s been lovely to meet so many talented individuals. This scene has so many highlights and I’d love to keep naming bands–it’s absolutely worth digging in and checking out everyone you can find!
What has Pillow Fort got planned for 2023?
We’re pretty lax on the ‘formal planning’ front right now, but I can say our second EP is ready to go, and likely to drop Q2, so keep your ears out. We’ll be aiming to tour again, play with more bands, and make more friends. And I’ve been writing quite a lot recently. Who knows, maybe more releases are on the horizon…?
Words That Change in Meaning is available on cassette through Hunk of Plastic.