Track by Track: The Losing Score – ‘Learn to Let This Go’ 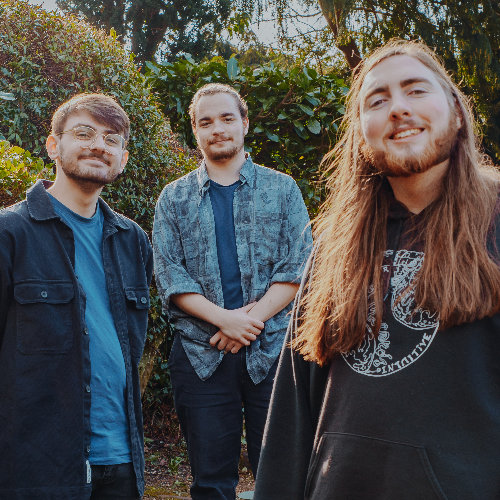 As a site that champions bands like Prince Daddy, Origami Angel, Worst Party Ever, and the like, The Losing Score’s debut LP Learn to Let This Go seems like it was tailor-made to top The Alternative‘s year-end list for 2022. It’s got the same emo-punk sensibilities that those bands made their careers on, with a softer, janglier tilt to it. It’s out now on Counter Intuitive Records, and it makes for a perfect entry into that label’s catalog. Vocalist/guitarist Brodie Normandin broke down all eleven songs on Learn to Let This Go, shedding some light into what went into putting together the LP. Read that below, and be sure to give it a listen while you do.

Maybe If I Try Hard Enough

I think it’s hard to hide it, but the album opener is certainly an ode to ’90s Weezer. Originally written back in 2018 as a potential b-side for our debut EP Still Waiting for Things to Get Better, this track has seen a lot of changes since it was first written. Originally, I wrote this as a silly, fun love song in a similar vein to blink-182’s “Josie,” with hints of Cheshire Cat humour that I shudder looking back on. I recently found the original lyrics on my old laptop and they should’ve stayed there! As well as the key, I changed about 95% of the lyrics to “Maybe If I Try Hard Enough,” turning what was once a cheesy joke song into something much more serious to me, admitting anxieties about starting a new chapter of my life, leaving home, and learning to let go of the past. Still working on it.

“Peachy Keen” was born out of the deadly combination of vulnerability, questioning your identity, and targeted ads. I sat on the intro/chorus riff for this song for months with no idea what to do with it, but then this song just sort of fell out of me one day after (metaphorically) tearing my hair out over feeling like a complete stranger to myself and feeling stupidly uncomfortable in my body. I felt so much regret from not expressing myself the way I had wanted to for years, but I was also too scared of judgement from complete strangers to do anything about it. I think I still am! It’s a fun song though and definitely one of our favourites to play. What’s the point of an identity crisis if you can’t turn it into a fun punk song?

The recording of our first EP was the first time we had spent an intense amount of time together as a band, doing what we dreamt of. Coming back home from that great height and going straight back to a job I didn’t like as well as a routine that was draining me, kicked off a rough patch. It was a domino effect that resulted in the difficult period inspiring “Junk Sleep,” a song titled after the lack of real sleep you experience when falling asleep watching TV or looking at your phone. Coming to the band with an incredibly honest song about breaking down, having to put on a happy face, etc. was difficult but it left an impact straight away. I just remember playing it to Jack and him being a bit stunned. Cal arrived not long after and Jack immediately made me play it again. The track was originally going to be on our second EP Closed for Season, but it wasn’t quite ready. We’re so glad we saved it for the album though because people really seem to be responding well to it, and with some of the difficult topics written about on the album, it felt like it fit in perfectly. I think playing it live for the first time is going to be an emotional one.

Do you ever see characters walk off into the sunset at the end of a movie and think “well they’re happy now but what happens next?” – probably not, but it’s interesting to think about, right? Well that’s what inspired this song and prompted me to look at my own life from that perspective. It almost feels like I wrote it as a more optimistic version of myself talking to the pessimistic person that wrote “Maybe If I Try Hard Enough.” As mentioned in the second verse, I kept dreaming about my childhood home that we left in 2019. That move felt like the end of a chapter, but I was struggling to move on from it and look forward in life. The chorus lyrics of “Don’t look back, you can’t live in the past so just look up ahead before you crash” was like a quiet voice in my head telling me that if I’m always looking backwards, I won’t see what lies ahead.

Whenever I hear of bands writing songs in such short amounts of time (like “Dammit” by blink-182), I feel like they’re massively overexaggerating, but “Dream of You” really was written in a super small amount of time – I’ve still got a flashback recording on my PC of me writing half of it. I was thinking back on that pure excitement that fills your body when you first meet the person you end up falling in love with and it inspired a song about my partner. Sometimes I feel guilty that I’m always spinning so many plates that I don’t have enough time to do all the things we want to do together, but I would still see her in my dreams so even if we were too busy to see each other, I still got to see her in some form and hoped the same would happen for her. The whole song came so quickly and I think it’s because I was writing from a place of passion for once.

“I said I wouldn’t write a song about this year” is in reference to the first year of the pandemic, but it ended up being so much more than that. At the time, I was so sick of the events of 2020 and ’21. I didn’t want to do what so many people seemed to be doing – making concrete references to it in their music, which they would then think of every time they heard or played the song. But I struggled a lot with my mental health during this time and feel like a completely different person now than I did before. I think a lot of people faced a similar battle and I felt the need to write “Brand New Person” about that time. This song was almost scrapped early on, but the way the “am I drowning” bridge section juxtaposed the fast and upbeat verses really helped bring the idea of varying emotions to life. I’m super proud of the solo/end section too.

The chorus to this song was written when I was 14 or 15-years-old, sitting at the back of an English class in school. I was always writing lyric ideas down, none of which saw the light of day until now. The words “I always knew I’d fall off the radar, I never knew I’d fall this far” were written in fear of losing my friends once we left school and becoming irrelevant to their lives. That exact thing ended up happening, bar Jack and a couple others, so when I had a dream 6 years later that a friend from school had passed away, I immediately started working on a song that those half-decade old lyrics would fit perfectly into. It was like a collaboration with my teenage self. The title came from a video game me and that friend had recently played together after a biennial catch-up.

I’ve never been the confrontational type and so when tensions rise in relationships. I tend to prefer to talk it out than argue. But sometimes I can’t face bringing it up until it’s too tender to talk about. I wrote “Vacant” from both my perspective and my partner’s, because there’s always two sides to a situation and more often than not, both sides are valid. You’ve got to talk about that. If your relationship is always a case of “who’s right and who’s wrong” it’s probably not a healthy one.

Not long before recording the album, I sent the demos to my partner and despite enjoying it, she was also concerned about me and asked if I was okay. I hadn’t realised how doom and gloom the whole album ended up being. So just weeks before recording, I put together a fun song about how much I cherish my friends and that the times I spend with them are often the only times I’m truly happy. In the studio, we couldn’t decide whether we wanted the guitar riff to be low or high, so Sam Bloor, the producer, chucked an octave pedal into the pedal chain and the problem was solved. Old family recipe!

Calm Before the Storm

I guess I didn’t do a very good job of listening to the lyrics in “Post Credits Life” because the final song on the album is all about romantising the past again, except this one is more about questioning nostalgia and if the good times were really as good as we remember. I’m often nostalgic for times I know I was probably miserable during, so “Calm Before the Storm” challenges the idea of whether things really do suck now or if we just need to live for today a bit more rather than constantly looking to the past and assuming it was better. We had a lot of fun recording this one. I almost passed out doing the long note at the end of the song, so we only did two takes of it (I think we used the second one). The three of us then stood around a microphone in the big live room at Lower Lane Studio and stacked up the group vocals that end the album. The chatter and applause at the end was pretty much the last thing we recorded too, so it felt like a really nice and mostly-unplanned way to conclude our first ever album.

Learn to Let This Go is out now on Counter Intuitive Records.