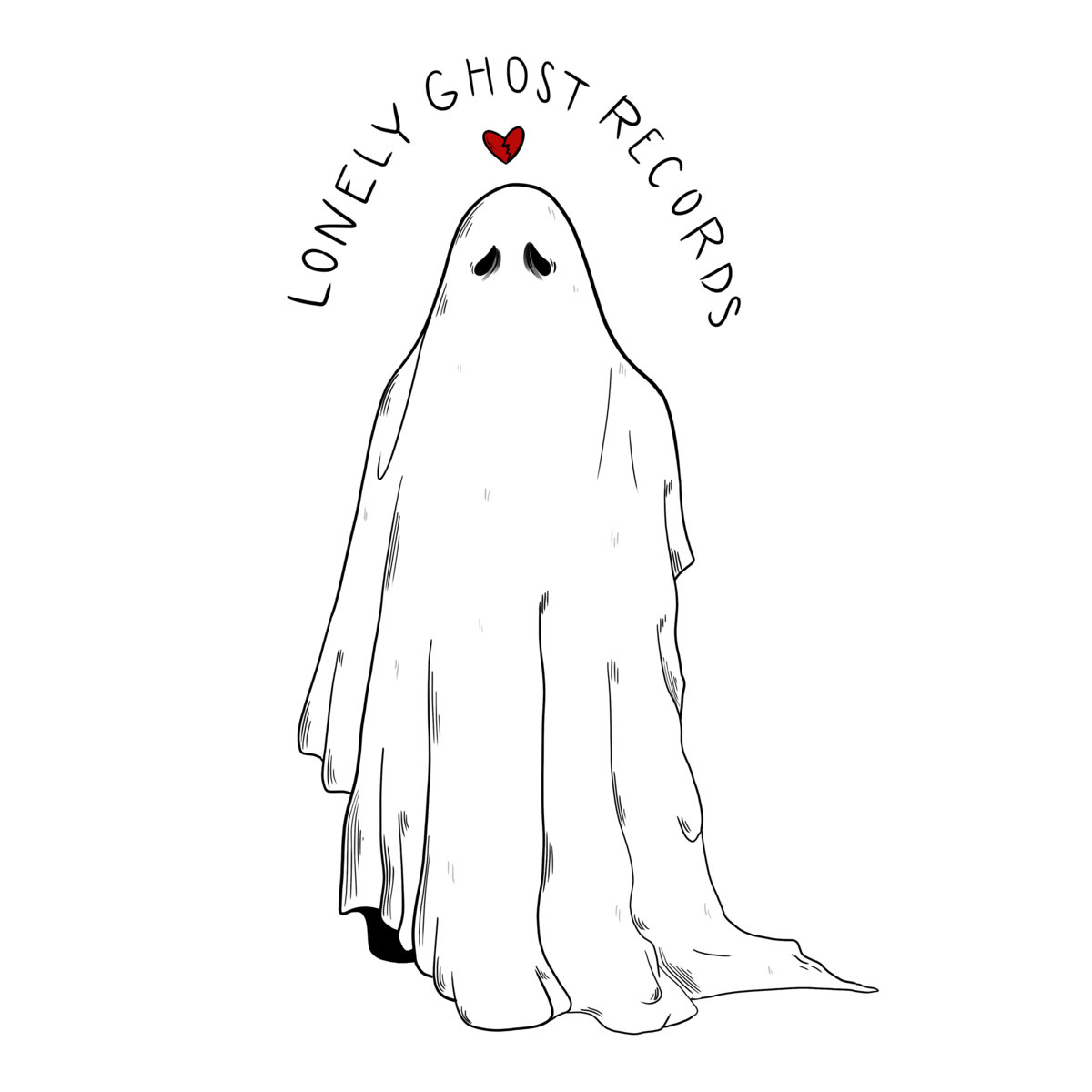 John: We became friends with other artists and wanted to pool our interests and help each other out. We had been ripped off and wanted to help our friends not get ripped off. We realized that things are more accessible if we’re working together so we did. We started with 5 artists, me, Shane (Father of the Year), Funeral Homes, Haxxer, and Leave Nelson B. We all made experimental music and we all were friends through music. When we started we thought it would be like a distrokid accounts and some emails but we were super wrong haha. It turned into something else entirely. It’s still wild to see how different we are now as a label than what we had originally intended.

How did you come up with the name? It was the first thing that made me want to find out about your label. Ghosts are rad!

Shane: The naming of the label was one of those things that we had a vague idea of a theme, and we started throwing things out there to see what stuck or didn’t. We came up with the ghost idea pretty quickly to go along with the general feeling of barely being real, lol, and went from there. Iterations of phantoms, specters, poltergeists, etc were all on the table. We eventually settled on Lonely Ghost because it sounded cool, and there wasn’t already a registered label with the same name.

John: Yeah! The first 3 that come to mind are Topshelf, Counter Intuitive and Run for Cover. There are a ton that we look up to and respect. We also love our fellow DIY labels like Chillwavve, Solidarity Club, Knifepunch, Sleepy Clown, Sun Eater, Chirp, Open Door. We teamed up with a UK DIY label called Hunkofplastic to do the Hey, ily vinyl run. I apologize bc there are more I didn’t mention but there’s so many awesome labels who get along and help each other out and they have taught us a lot. That’s a community in its own right. We all talk in group chats and stuff haha.

Shane: My favorite part of the job is probably seeing the stuff we’re trying out come together and have (even mild) success with it. A lot of what we do/have done is an experiment. We have ideas, we try stuff out for a while, and see what works and what doesn’t. A lot of our “side projects” have developed that way. “Hey, we should try making a how-to series” “ok, let’s do it” and then we try it out. And along with that, we learn a whole bunch of new skillsets that we didn’t have before (ie graphic design, video editing, advertising, etc) I kind of get bored if I’m not trying new things out, so that part is nice. For me, the most difficult part is definitely balancing my outside life with keeping things for the label rolling. Working on the label is something that I do outside of my full-time job, and there are more times than I’d like to admit where the two things find themselves in conflict with one another.

John: I would say pretty much the same thing.

Shane: Probably that the stuff you see that is tangible is maybe 10% of the work that has gone in. The biggest parts of what we have to do are management and coordination. We spend more time on the phone figuring out when things are going to release, how we want to approach something, and getting things together than anything else.

John: Yeah the publishing is the easy part. But the graphic design stuff, the trailers, mockups, press–it takes a lot of coordination and time.

Shane: So, a little yes and a little no. The pandemic made our model of doing things remotely and from home more viable, as it became what other people started to have to do as well, so in that sense we were a bit ahead of the curve. But, it did force us to really lean into our social media presence, and try to get a handle on that side of it. Our social media approach before was “um, yea, post random things… that’s how social media works, right?” We learned very quickly that that didn’t work, and we had to have more of a focus for what we were doing, and that’s what some of our side projects were born out of.

John: It also made us finish the website and gave us time to come up with some ideas and test them out. A lot of stuff clicked into place because we had nothing else to do with our time haha.

What is one valuable lesson you have learned from running the label?

John: Don’t be afraid to not know something. It’s ok to reach out to people and ask questions. People have been so kind to us and we’re constantly learning because we aren’t afraid to say we don’t know.

What do you think makes Lonely Ghost Records unique?

John: We’re a truly internet-based label that prioritizes artists and community. We try to make things accessible and affordable to people. We also are willing to help people outside of our roster. Obviously with 2 people doing 95% of the work for the label we have limitations, so we try to be mindful of how much we can take on while providing quality work, but we are always open to a conversation and always willing to help anyone who asks.

Your website has some really cool features, like the interview series Tellin’ w/ Ellen and the video how-to series for independent artists FriDIY. Where did those ideas come from?

Shane: A lot of that grew out of a need/desire to create regular content, and seeing a need in the scene for things that didn’t exist. FriDIY came about as a response to getting similar questions from people just coming up a lot. “Hey, how do I (insert question here)?” We saw it as a way to give back to the community and help artists who were trying to release music on their own avoid some of the mistakes we ourselves made, or some of our friends were making.

John: Tellin’ w/ Ellen was 100% Nelson’s idea. I edit the episodes but he came up with the concepts, the topics, the questions, etc. We like to give our artists creative freedom and support them if they have ideas. It was mutually beneficial and I truly love the concept. A podcast version of liner notes is so in line with our digital-based presence. I think our artists really love participating in a community of music lovers and this is just one example of that.

If you could go back in time and give advice to yourself before you started Lonely Ghost, what would that advice be?

Shane: I’d probably tell myself to vet people better. We’ve got a pretty good handle on it now, but we spent a good chunk of time (and money) working with people in the beginning that didn’t  have the best of intentions and we got kind of burned.

John: Oh boy, haha. I probably have a lot I could have done differently.

I think when you’re starting out, you want to use social media + clout as a metric since it’s really REALLY hard to measure early success. I struggled with this early on. I’d tell myself to ignore social media and instead but look at whether I see us out-performing what we had done previously. The healthiest measure is always going to be one where you aren’t constantly comparing yourself to someone else.