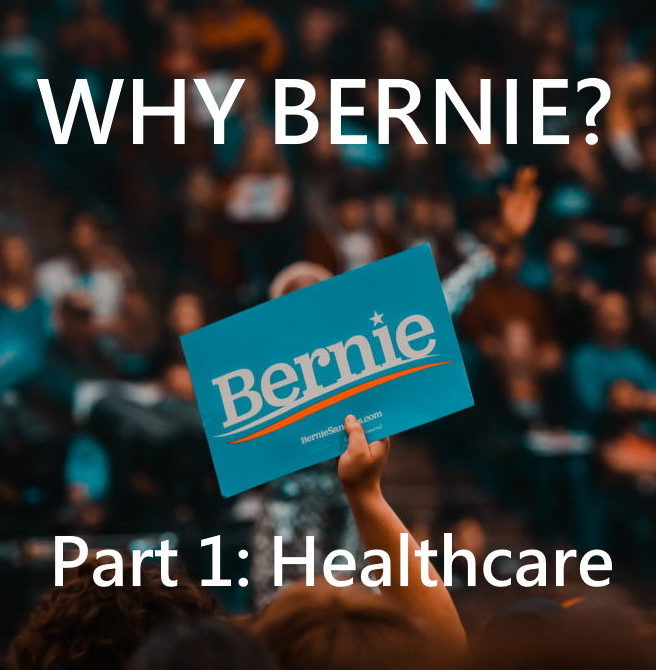 I’m going to break my Bernie support down into different issues over a few articles. With each issue, I’ll explain quickly and clearly why the issue is important and why Bernie’s position is superior to the other presidential contenders. 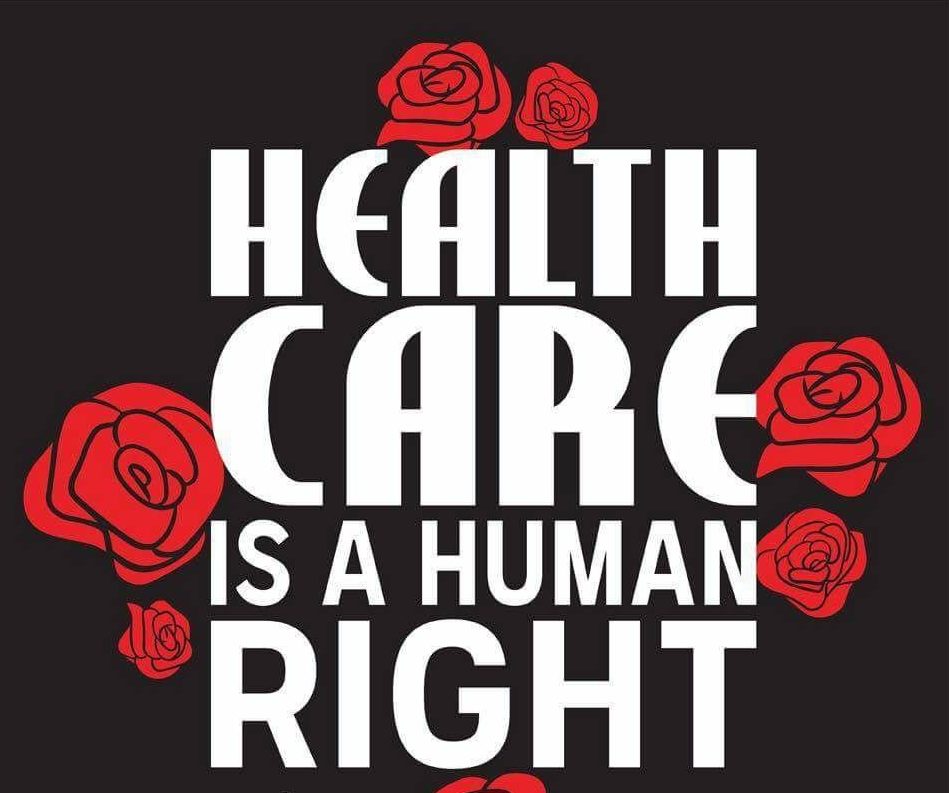 I’m leading off with healthcare because healthcare reform is desperately needed, and it’s also a clear area where Bernie is far better than the competition. Everyone needs healthcare, and polls find that it is one of the most important issues for voters in the upcoming election. Healthcare policy is especially critical for people who don’t get their insurance from their job, including musicians, artists, freelancers, and many other careers.

To cover the current state of things: America is the richest country in the world and we pay more for healthcare than anywhere else, but we have a low standard of care, along with 87 million underinsured and uninsured people, plus inflated healthcare costs pushing many more people into bankruptcy. There are webs of hundreds of different insurance plans, and still no one ever seems to have the right one when they need it, and even finding a doctor who takes your insurance can be difficult. Obama famously passed the Affordable Care Act (ACA), aka Obamacare, which made it a bit easier for people to buy insurance and allowed people to stay on their parent’s insurance for longer, but it was more of a Band-Aid than anything because it didn’t lower costs or change the structure of the system.

The American public is extremely unhappy with the situation, and without major healthcare changes millions more will suffer and die unnecessarily. Luckily, Bernie’s Medicare For All plan would end all that pain once and for all.

Bernie’s Position: Medicare For All

So, what is Bernie’s Medicare For All plan? You may know of “Medicare”, which is government insurance for older people. Medicare for All is kind of like that, and kind of not like that at all.

The Medicare that older Americans have is tax funded government insurance for everyone over 65 that covers most of the cost for many medical procedures and doctor visits. People on Medicare still need to make additional payments for some services, many places don’t take it, and there are areas that aren’t covered at all like assisted living facilities, but it provides healthcare to a huge amount of Americans and is regarded as a success.

Conversely, Bernie’s “Medicare For All” is government insurance that covers every single person for every single type of healthcare visit or procedure (dentist, physicals, surgery, therapy, rehab, etc.) and it is tax funded and completely free to use. Even better, every doctor must accept it, because private insurance will be completely replaced. No other insurance or payments would be needed.

Talk about under-sell of the century. Bernie’s plan is miles better than current Medicare. That said, people know Medicare because its pretty good and run by the government, therefore Bernie is adapting the name. But you should just know Bernie’s insurance would make Medicare look like peanuts and that even people on Medicare right now would see a vast improvement of coverage in the form of fewer out of pocket costs and a larger number of services covered.

A  Medicare For All system also has additional benefits, including collecting better health data to make for better research that can help cure diseases (aka how Cuba developed a lung cancer vaccine before us), and creating a healthier US population mentally and physically, because people would be able to see a doctor whenever they need (aka why the rest of the developed world is way healthier than us). Imagine if every single American had a therapist, and every single person struggling with addiction could attend rehab for free? That alone would work wonders.

As an extra bonus, Medicare For All would end the need for people to depend on their parents or their job or their partner or anyone else for their health insurance. That means that unions would be able to focus on other benefits with healthcare fully covered, and employers would be under pressure to provide their workers with even better benefits and pay. Imagine what teacher’s unions would be able to negotiate if they no longer had to worry about healthcare. The same goes for the NFL players’ union, and any other union, or even just an individual employee.

Obviously, this all seems expensive, but this is where Medicare For All shows why it’s so cool. Studies have shown that Medicare For All is CHEAPER and more efficient than our current private insurance system, because getting rid of all the insurance company advertising and red tape makes things way more efficient, and moving everyone to a single government insurance gives the government greater power to negotiate lower prices (aka why the rest of the world pays so much less than us). With a small tax on the very rich, and even smaller taxes on the rest of us, we would all have better healthcare for cheaper than we do now.

If there is a catch, it’s that passing Medicare For All will be tough to do over the screams of Republicans and insurance company funded Democrats, but we must remember how important this fight really is. Millions of lives hang in the balance, so no matter how hard it is, we need to fight to have a healthcare system that guarantees care as a right to everyone like the rest of the civilized world. 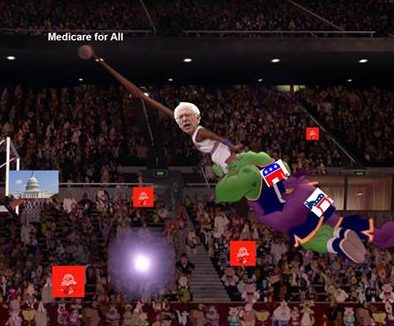 This is exactly why it’s absolutely necessary that we have a president who is willing to fight tooth and nail to make it happen. No one thinks Bernie can just wave a magic wand and get Medicare For All passed, but if the president AND the public push for it together, we could quickly see Congress get on board, and at the very least we know Bernie would fight to push us in the right direction. Did I mention Bernie would also like to forgive all current medical debt in the country before making healthcare free? 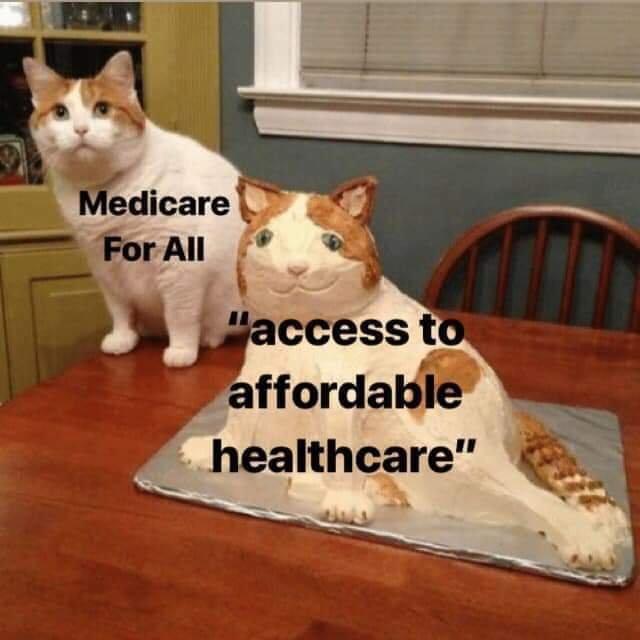 The remaining candidates not named Bernie Sanders, either want to have a government insurance that exists along with private insurance (Biden, Bloomberg, Warren) or just to keep things how they are / make things worse by repealing the ACA (Trump). The way things are now, with millions of people suffering and dying from lack of care, or going bankrupt trying to get to a doctor, is not good enough, so that leaves only the other Democrats and their public option.

What is known as a public option is a government insurance that exists alongside, and often intertwined with, private insurance companies. That government insurance would be taken by some doctors and cover some expenses, but private insurance, from employers or otherwise, would still cover the majority of Americans. This Frankenstein combination has all of the disadvantages of our current system (a tangled web of coverage, difficulty finding doctors, massive insurance industry waste, etc.), with the added complication of creating a government insurance company, but none of the benefits of a universal program. These public option plans have been therefore been found to be even more expensive than Medicare For All, and they wouldn’t even provide a comparable level of care. So yeah, that option also is bad. 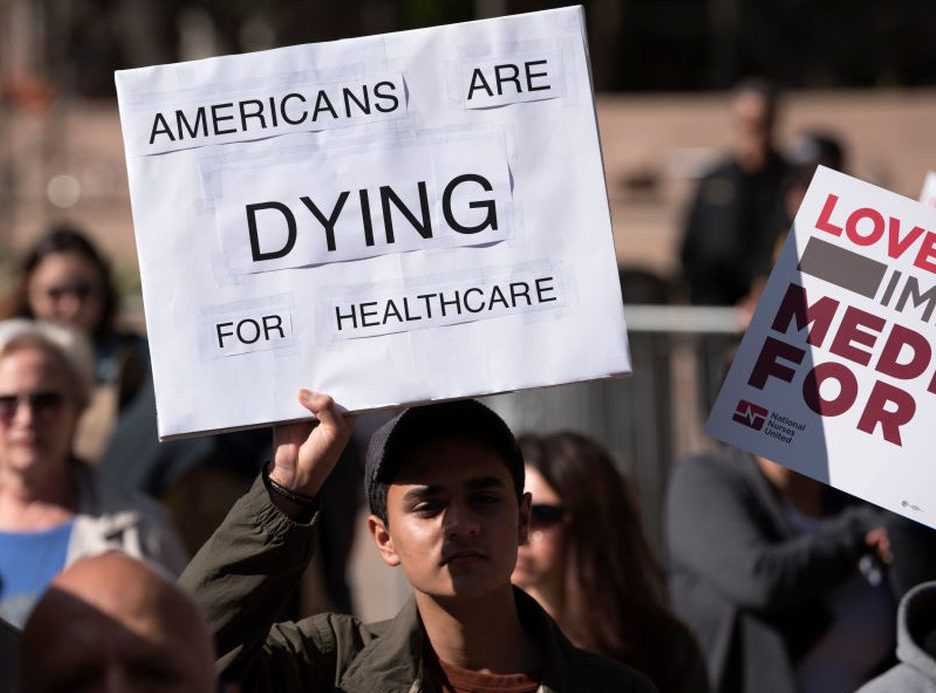 Healthcare effects everyone throughout their life. If it hasn’t already affected you, then you’ve either been very lucky, or you’re mistaken. In my own life, I have been unable to get to a doctor or therapist because it’s too expensive, and I have had friends pass away from drug addiction, unable to afford rehab or therapy. I’ve seen people denied insurance by their employers and I’ve struggled to figure out my own insurance as someone who is self-employed. Most of my artist friends are underinsured or uninsured. I have friends and family suffering under extreme medical debt or hanging on to a job they hate for the measly insurance they offer. It all sucks, and I’m sick and tired of it.

When I was visiting Canada, my partner Jess got sick, and we went to a doctor with no insurance at all, and we got an appointment and 2 prescriptions for under $75. If we had been Canadian, it would have been free. You cannot convince me that America can’t afford to keep up with Canada. We need Medicare For All and Bernie is the only candidate who has a Medicare For All plan that we know will fight to make it reality.

Make sure to support Bernie Sanders and tell everyone you know to vote for Bernie in your upcoming primary. Many states vote tomorrow and the rest vote later this Spring! Head to BernieSanders.com for more information. 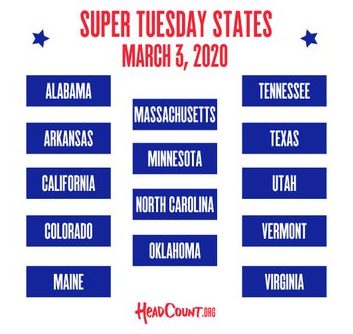