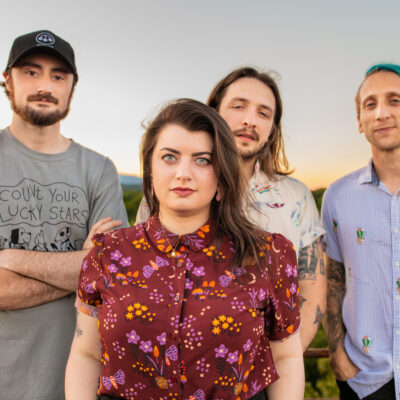 It was only two months ago that Tiny Blue Ghost dropped their latest EP The Underneath. It was the purest expression of the band’s sound yet, an atmospheric and catchy and heartfelt dose of brooding indie rock. Already, though, it seems as though the band has topped even that EP. They’ve just announced their third full-length, and first for emo stalwarts Count Your Lucky Stars, called Between the Botanicals, and along with it, we’re excited to bring an exclusive premiere of the record’s lead single “Lavender.”

It’s a flowing dream pop song that plays to all of Tiny Blue Ghost’s strengths, Marissa Carroll’s airy voice mixing in with strings and delicate drum work for a beautiful mix. It’s one of the lighter songs on Between the Botanicals, but it’s just as powerful as any rock and roll banger. Carroll shares that

“Lavender” was the first song I wrote for this record late summer/early fall of 2019. The lyrics were based off of a time where I  struggled with accomplishing day-to-day tasks; my brain constantly felt foggy. This included hanging up a picture frame that fell off the wall earlier in the year, a very simple task that felt like a mountain to do. It sat on the floor for about half a year collecting dust, with a big empty space on the wall between the other pictures. It acted like a visual representation of what my mental health was like at the time. After I was finally fed up with looking at it on the floor, I glued the frame back together and hung it up again. This simple 15 minute task took me 6 months to finish, and soon enough I started to notice this pattern in other aspects of my life.

“Lavender” is a journey of mental health, and a reminder to be gentle with yourself. It became the central theme of the record and inspired the album art and title Between the Botanicals.

Between the Botanicals is out August 26 on Count Your Lucky Stars.