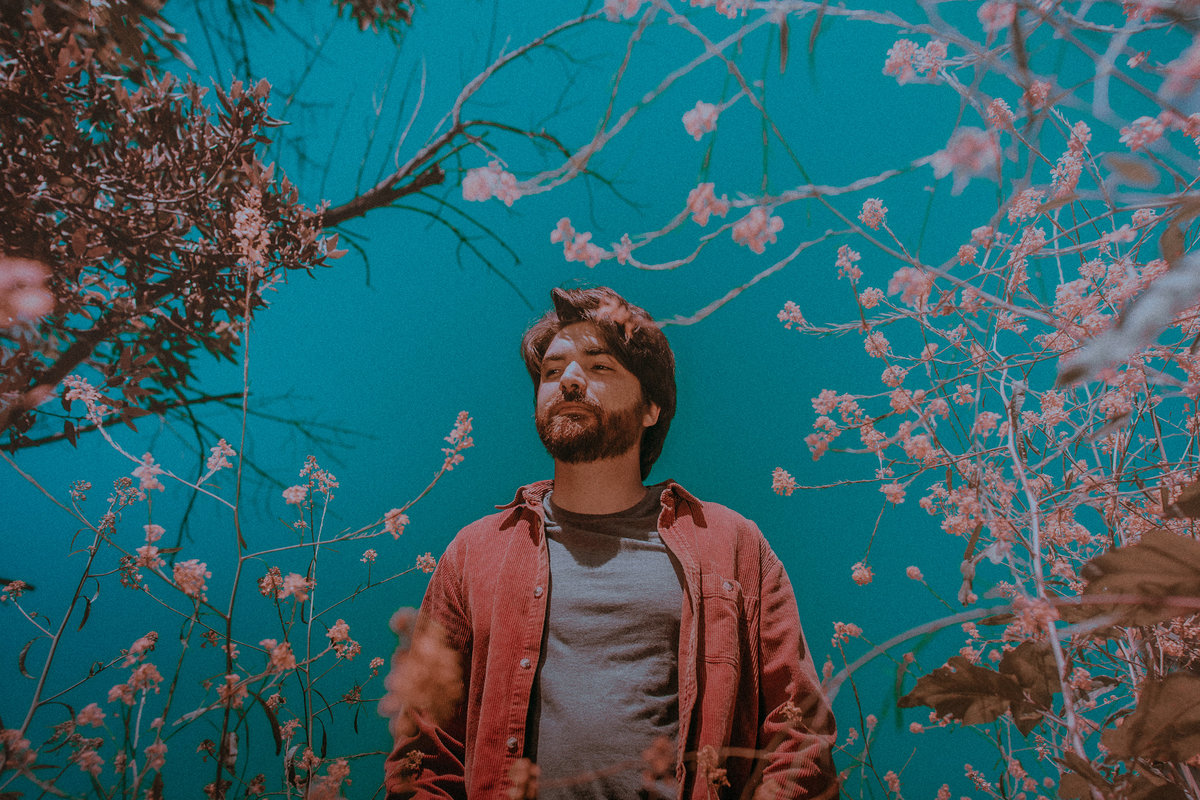 For the past five years Mason Maggio’s been juggling his two full(er) band projects–Tigers on Trains and The Republic of Wolves–with his solo music. That’s all come to a head this year now that, after a steady stream of singles, he’s dropped Sleep Study, which feels like the culmination of his years playing folk with Tigers and grunge-adjacent alt-rock with Wolves. It’s the finest Souveneer release yet, an airy dose folk-rock anchored by Maggio’s smooth and distinctive vocals. He was kind enough to take the time to dig into each of the nine songs that comprise Sleep Study, and you can read what he had to say below.

“Origin Story” was definitely one of the most fun songs to write, and maybe the first one that ever sounded like a single to me right off the bat. Production-wise I really embraced my pop-punk side and let my nostalgia for stuff like Weezer and Blink-182 guide the sound—which I’m realizing now is very fitting for the title of the song, since that was the first kind of music that inspired me to write songs as a kid. But it’s essentially a song about building and maintaining a sense of your own identity, in spite of all the external noise that calls it into question. The lyrics are kind of cynically grappling with the ambiguity of “self-acceptance,” which is so dependent on what we choose to see, subconsciously or otherwise. And I was honestly delighted to be able to fit the word “hydroxytryptamine” (the more technical term for serotonin) so perfectly into a rhyme scheme.

Simple, classic folk songs like this one feel the most natural to write for me, probably since I’ve spent so much of my time as a musician within that genre. My first proper music project, an acoustic duo called Tigers on Trains with my good friend Christian, fully embraced that sort of traditional sensibility; every once in a while I’m hit by the inspiration to write something that feels like it can only exist in that world. “Midnight Math” is about being in a happy, stable, long-term relationship while also having a brain that’s custom-built to question and overanalyze every little aspect of reality. While it’s super specific to my experience, I think the main theme of being up at night, overthinking and trying to make sense of love, is probably relatable to a lot of people. I really liked the idea of having a “title track” for this record that doesn’t actually say the title word-for-word but rearranges it instead, which is what inspired the chorus lyrics.

“Evelyn” was a song that came to me slowly, in little bits and pieces, and changed quite a bit throughout that process. It started as kind of an homage to “How’s It Going to Be” by Third Eye Blind, which I think is lyrically so beautiful and simplistic, and I wanted to approach that same topic or question from my own perspective—imagining what a wonderful relationship might look like in retrospect from its hypothetical endpoint. It evolved into a kind of poetic montage of that semi-fictional relationship from its first, harmless tensions through its bittersweet aftermath, while trying to find the beauty in all of those moments. A lot of the imagery, especially in the chorus, is inspired by my pathological resistance to planning ahead, which obviously puts a certain kind of stress on long-term relationships. I didn’t really have a vision for what the song would sound like before I started recording it, so I just followed my instincts and tried to find what felt right. I was pleasantly surprised when it took on a folk-rock style influenced by artists like Pinegrove and Kevin Devine, so I leaned into those influences.

This was another fun one that just sort of sprang up in my head one day, built around these stream-of-consciousness lyrics about my messy relationship with growing up. I decided to embrace a kind of absurdism and dark humor that I think pops up throughout the whole record, but it seemed to work especially well with the ironic, cynical approach this song takes. It’s basically a begrudging acceptance of the standards and expectations surrounding “adulthood,” while maintaining that it’s all very arbitrary. Genre-wise I think I was trying to integrate a pop-punk song structure with a kind of dirty, old-school folk vibe, but I loved the idea of dropping the chorus down to a soft, sweet, twinkly sound to contrast with the verses in an unexpected way. It all really came together when I started experimenting with what I very casually call “the grunge chord,” which is just a flattened VI (but probably has a more technical name in music theory). Bringing in that darker chord change during the bridge definitely reflected a sense of anger and frustration that I think is underlying the whole song, so it made the whole thing feel complete. I also never really thought I’d use sound effects like crowd applause and airhorns in a serious song, but it just felt right for this one—there’s also an unlicensed vocal sample from a Kesha song that recurs a few times, but it’s distorted just enough that I don’t think I’ll get sued.

“Meet Me in the Darkroom”

I had been playing around with the chords and lyrics of this song for a while, but it never really felt right until I decided to try it without a fixed tempo. For a while I’ve wanted to make a song that kind of floats outside the usual constraints of a metronome and avoids any consistent rhythmic components, so I had a lot of fun letting all the melodic elements fall freely into a very ethereal composition. There’s definitely some Bon Iver and Sigur Ros influence in that aspect of the song, but I also remember feeling particularly inspired by Taylor Swift when I was writing the vocal melodies. When the drums do eventually come in they’re big and punk-y and technically in a different time signature than the chord progression is, but I love that juxtaposition. Building off some of the themes of the previous songs on the EP, “Meet Me in the Darkroom” is about growing and changing side-by-side with another person, and navigating the chaos and scariness of that together. There’s also a lyrical reference to The Lord of the Rings in there that isn’t particularly subtle, if you’re anywhere near as big a fan as I am.

“That’s What Concerns Me, Man”

“That’s What Concerns Me, Man” started out as a voice memo that I recorded while walking my dog, right after passing by a big caged tree in my neighborhood. That image, and the obvious question it evokes, felt like a kind of beautiful analogy for a lot of other things. It was the first song that I’ve ever started composing on ukulele, although obviously it grew from there production-wise. As the lyrics state kind of plainly, it’s a song about knowing absolutely nothing about anything, and realizing that you just have to be okay with that mystery. It’s sort of an optimistic nihilism, a reflection on the idea that we don’t know how or why life and death happen the way they do, but we can learn to coexist with the absurdity of that. The title is an adaptation of a line from one of my favorite movies, Green Room (starring the late, great Anton Yelchin).

This was one of the first songs I wrote for this EP, and it felt like the manifestation of something that I had needed to express for a long time. Again it was pretty stream-of-consciousness, but in a more honest and autobiographical way than probably any other song I’ve written. The lyrics are just very blunt and straightforward about my struggle with anxiety and how it’s shaped my life and my relationships. Often when I use very detailed imagery it’s metaphorical, but in this song the specific visuals that I’m evoking are just memories of impactful moments in my life. But it’s all in service to that central narrative of my complicated, uneven journey with mental health. One thing I allude to in the first verse is my rejection of the all-too-common idea that using psychiatric medication somehow takes away part of a person’s identity or personality—I’m not saying that can’t happen, but it’s been my experience that appropriately treating anxiety and depression allows you to be who you actually are, underneath the inhibitions and burdens placed upon you by a disorder. And if you’ve allowed yourself to be shaped by that disorder (or any other problem) for long enough, it can be a jarring process to figure out who you are once that problem starts to retreat.

“Last Day of the Year”

“Last Day of the Year” is essentially a song about the absurdity of time. The very first lyric, from which the rest of the song emerged, kind of alludes to the main idea: that any given day is simultaneously the last day and the first day of your life, depending on how you choose to conceptualize it. You can delineate time in any way you want, regardless of what a calendar or a clock says, and every single moment is equally full of potential. That’s both terrifying and wonderful, but this song ends up taking a mostly optimistic view of that uncertainty. It’s an acknowledgement of the fact that I’ve somehow made it this far without facing the long-expected catastrophe, so maybe I should just enjoy my borrowed time as well as I can. Fittingly, the song structure plays with rhythm in a lot of fun ways without actually changing the time signature at any point. The accents and chord changes move around in ways that felt exciting and almost erratic to me, and the song kind of ends after the second chorus before starting again with a different tonality but the same lyrical message.

“Runner’s Heart” was originally written for my last EP, Dream Journal (which came out in June of last year), but something about it didn’t feel quite complete at the time. The desire to finish and release this song sort of drove me to build a whole new EP around it, as a follow-up to Dream Journal. It’s about the realization that I’ve grown and changed into someone new over time, and in spite of my resistance to it it’s ultimately made me a happier person. It finds the value in not caring so much about the unfortunate or inconvenient aspects of life that we can’t change, or that are no longer worth our time and effort to try to fix. The bridge lyrics were inspired by a quote from Joan Didion that I’ve always loved, about “keeping on nodding terms with the people we used to be, whether we find them attractive company or not.” I hadn’t conceived of this song as a closing track until I figured out the ending, which really felt like a fitting outro to this whole collection of new songs. The abrupt shift from an otherwise soft, beautiful song into a heavy, grungy rock crescendo felt like a summation of the record’s theme of finding beauty in absurdity, and the final lyrics are intentionally ambiguous in their outlook.

Sleep Study is out now.