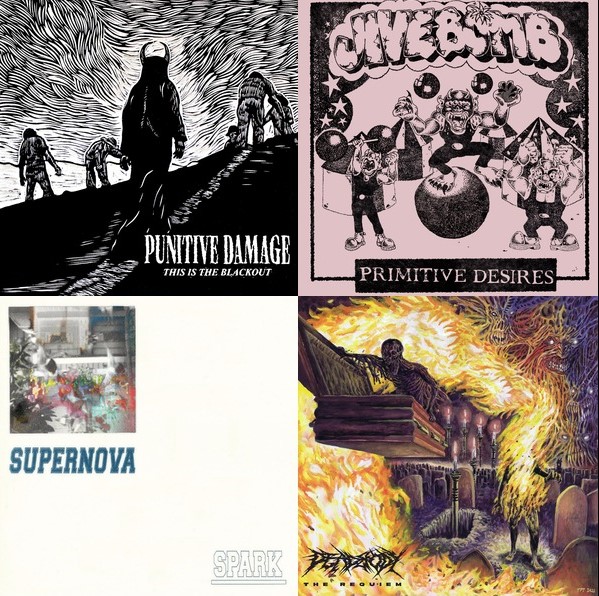 Hardcore is thriving, and it doesn’t seem to be slowing down anytime soon. As a way to document this current moment, we present Step 2 Rhythm, a monthly column rounding up the best in hardcore coming out right now.

Together Colin and Taylor Young have been instrumental in shaping hardcore over the last decade. We first saw this with Twitching Tongues in the 2010s, bringing the metal leanings of Type O Negative to the fore. Their influence has only continued with God’s Hate, which is more traditionally hardcore, making sense alongside a Merauder record. Deadbody is the newest project between the two brothers and, while it shares a lot of familiar parts from their other ventures, is distinct enough to stand on its own. It’s more of a fusion of death metal and hardcore than previous projects. But you can still tell it’s written by people with a background in hardcore, choosing to keep songs brief instead of dragging them out. A Cannibal Corpse record simply would not have this many mosh parts.

At this point, Extortion is an institution for hardcore in Australia. Their first release dates back to 2006, and they haven’t veered too far from the original conceit of the band. But it’s been over a decade since they’ve put out anything, so it makes Seething arrival feel important. Fans of the band will find nothing surprising about this new release. Extortion’s blend of powerviolence is still on full display, keeping songs as brief as possible. But even if you aren’t a fan of this sub-genre of hardcore, there’s plenty to enjoy. Some parts are genuinely heavy, fitting alongside the best metallic hardcore. There’s even a song that reaches the one-minute mark and resembles a typical song structure.

The first thing that comes to mind when you listen to Firewalker is the vocals. It is one of the more distinctive in a genre with plenty of charismatic vocalists. It almost makes more sense on a death metal record than a hardcore one. My throat hurts just listening to Firewalker, to be honest. This vocal trait is paired with the familiar hardcore stomp in the northeast. They make sure to put in plenty of two-step parts and keep songs brief. You can see Firewalker’s influences clearly on their newest release, Promo 2022, choosing to cover a Subzero song, which was a New York hardcore band from the 90s.

Hardcore punk is an endless source for the genre, and Jivebomb is the latest proof. Primitive Desires starts in a very familiar way to hardcore listeners, giving listeners an instrumental intro. You can imagine bodies flailing all over the dancefloor and moving side to side. The rest of the EP is short bursts of hardcore fury, with no song overstaying its welcome. No song even reaches the two-minute mark. But each track is still plenty memorable, and certain vocal phrasings stick to me for hours after I listened. It makes for an impressive follow-up to Jivebomb’s demo, making me excited for what’s to come in the future for the band.

Inclination started with a desire for Tyler Short to create a straight-edge band. His ideas had been festering for several years, and you can tell listening to Midwestern Straight Edge. “No Exit” was a statement that would define the band and its ideology. But it’s been five years since the project began, and we now have a more considered philosophy in Unaltered Perspectives. It looks at the problem of drugs from all perspectives, telling an interconnected story through an entire album. But even if you’re somebody who is uninterested in this tale, this is still a record you can connect to. Guitarist Isaac Hale continues to establish himself as one of the most important hardcore songwriters, creating plenty of pleasing breakdowns. Short’s vocals are as menacing as ever. If you want to read more on this record, I also wrote a feature on them at Brooklynvegan.

At this point, hardcore has been around for long enough that we’ve seen death metal infect its way into the genre. Without it, the modern breakdown would not be the same. You can feel the influence of metal when listening to No Cure, a new Alabama straight-edge band. There are parts on Cursed From Birth that feel directly lifted from the Swedish death metal of the 90s, but it’s paired with the immediacy of hardcore. You can feel the band’s influences the most on their cover of Firestorm by Earth Crisis, which closes out the EP. It’s quite a bit more brutal and menacing than the original, making it a bit different from a 90s metallic hardcore revivalist act.

Punitive Damage-This is The Blackout

Even if you couldn’t make out the lyrics, it’s clear that vocalist Stephanie Jerkova of Punitive Damage is pissed off. But it’s not in the way that we typically see in hardcore, which Jerkova describes as “some trite shit about bullshit about ‘my brotherhood’ or ‘don’t disrespect me,’ but those things just aren’t super relevant to me.” Instead, we have a record that speaks more directly to Jerkova’s experience, set against a manic barrage of hardcore punk. It’s a record that comes from the perspective of someone from a marginalized community, using hardcore as a vessel to say something. This point of view is most clear in “Que? Me Tienes Miedo Ahora”, which is sung in Spanish and somewhat different from the typical straight-ahead fury of Punitive Damage.

Roll Call instantly feels familiar from the start of their debut EP. It’s reminiscent of Bridge Nine Records in the 2000s, whose imprint on hardcore during that time was massive. One member of Roll Call was even in Outbreak, who released two records on the label. All this means is that Roll Call is hardcore that puts a premium on melody as much as aggression. You can make out all the words without a lyric sheet. The lyrics are pointedly looking at the world and making some observations. But they are without a clear conclusion or a definite answer, seeking to at least get people to start thinking a bit critically about the world around them.

SPARK conjures memories of hardcore during the 2000s, channeling the best parts of Carry On and In My Eyes. And even though SPARK is doing revivalism of what was already a youth crew revival, there is still a degree of personalization on Supernova, the debut record for the band. While many of the mosh calls are familiar, the lyrics are less so. “Nothing (To You)” is the only explicitly straight-edge song (“May this X be a reminder of who I’m striving to be Every day”). The rest of the album almost works as self-help mantras, hoping to drag the listener out of their sense of complacency. This theme coalesces on the closing track, “Shine,” ending with the record with a sense of hope that things can ultimately be better for everyone.

Reissues are just as important as anything that comes out of the hardcore scene on a monthly basis. It’s the way bands become remembered and reach a younger audience. Without it, they could be relegated to the dustbin and forgotten. A whole swath of bands is only available because of Youtube, limiting their reach. This lack of access matters because, for some, if it’s not on Spotify, it might as well not exist. To alleviate that reality, I’ll try to give a shoutout to one reissue or a new album I discovered each month.

It feels like a revaluation of Soul Search is imminent. For the first time, all of their music is on streaming, with the demo finally coming to Spotify recently. The band’s influence is still felt today in the kind of knuckle-dragging metallic hardcore that we hear coming out of California today. Someone like Sunami or Extinguish owes a lot to Soul Search. Their impact was apparent watching live footage of the recent reunion in Los Angeles this past month. The reactions were unhinged, with people swinging indiscriminately in any direction. I would be surprised if anyone near the front of the stage walked away without sustaining an injury.