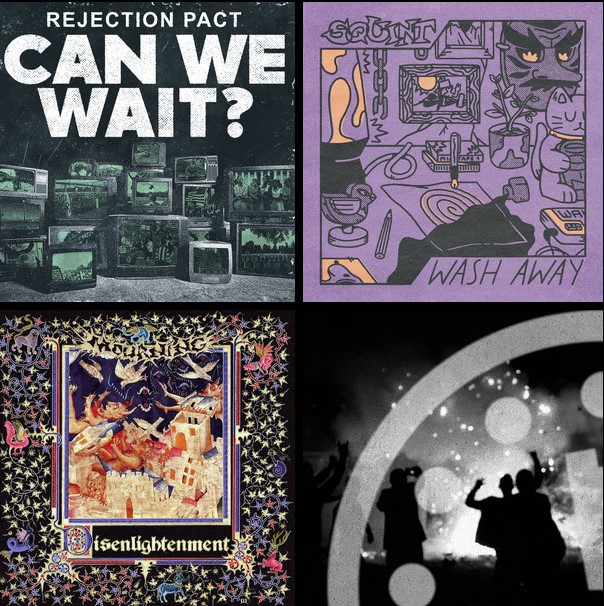 Hardcore is thriving, and it doesn’t seem to be slowing down anytime soon. As a way to document this current moment, we present Step 2 Rhythm, a monthly column rounding up the best in hardcore coming out right now.

Some people may quibble if this split is truly hardcore. Even if it doesn’t fit under the narrow field that some may associate with the genre, it works for me. Both bands play a form of oi-inflected hardcore that seems meant to be blasted in pubs and dive bars. The Chisel appears to be the leader of this form of hardcore as of late, releasing a great debut record last year. Their two songs seem to be delving deeper into oi and show the two different sides of the band. “Keep it Schtum” is a ripping hardcore song, while “You Ain’t Seen Nothing Yet” sits in a mid-tempo space that veers closer to pub rock. On the other hand, Mess has very little of a hardcore punk edge and instead seems to be more grounded in oi. It makes for a nice change of pace compared to everything else that I’ve included in this month’s column.

Dead City gets to the core of hardcore, conjuring memories of LA hardcore in its first wave. It was made by people who were otherwise ignored by society and used the genre’s simple aggression to express themselves. It’s something that comes up repeatedly when you examine the people making this kind of aggressive music. You hear the realities of living in LA clearly on fuck the opps, which deals with the vocalist’s struggle with addiction and incarceration. There is no sort of metaphor or overly stuffy language going on. These songs are brutish in the best way possible, inviting a feral response in the listener. The newest release from Dead City is no different, choosing simple names for songs like “fuck peace” and “die long.”

Dragged to me couldn’t come from anywhere other than Massachusetts. There’s a stompy quality to the riffs where I imagine people moshing in work boots to them. I hate to call any type of hardcore primitive, but that’s how I feel when I listen to the instrumental intro before the vocals kick in. It captures a feeling at the core of the best hardcore punk, making me want to mosh side-to-side in my living room. Dragged makes even more sense when you consider the membership of the band. Trevor Vaughn has been making different permutations of hardcore for over a decade, from the Boston hardcore of Rival Mob to the powerviolence of Wound Man. This project is just an extension of his ever-growing discography for him and is a little bit of a throwback compared to his other projects.

Earlier this year, Envision put out one of my favorite hardcore releases of the year in And Still… It was some of the best of what I’ll call fantasy booking of 90s metallic hardcore, taking inspiration from acts like Outspoken and Tension but with a bit of a modern edge. The 90s obviously inspire it, but thanks to current production, it doesn’t necessarily sound like a copy of that time. To me, it sounds like the middle point between One Step Closer and Magnitude. It’s still heavy but with an ear toward melody in certain respects. We now already have a follow-up to that EP with a promo for a record coming out on the reliable From Within Records. It features two original songs along with a cover, continuing to show why Envision is one of the best metallic hardcore bands going right now.

Faim is quite simply a political hardcore band. They spell it explicitly in their lyrics and on their Bandcamp page. For them, hardcore is not just dancing music but a platform to create social change. Not every song sticks to the typical platitudes that one associates with a political band, looking inward at their scene in “All Talk.” Of course, you can’t go wrong with an anti-cop song, which you have in “Hide Behind Your Badge” in a new two-song promo. But ultimately, all of this messaging wouldn’t matter if Faim didn’t write ripping hardcore punk. The lyrics are supposed to be additive. People still listen to this type of music to ultimately get some kind of catharsis.

Mourning is slightly different from the metallic hardcore fare I have covered in this column in the past year. At least to my ears, it moves beyond the typical influences of Merauder and 90s death metal. The title track of Disenlightenment starts with the classic tremolo picking that one associates with black metal before transitioning to a familiar hardcore groove. It’s just a slight enough change that makes the record feel slightly fresh to my ears. But it does a nice job of not leaning on the black metal influence to become something barely identifiable as hardcore like Bleeding Through. You can still easily envision what the dancefloor would look like as you listen to the barrage of riffs.

OZONE-Hard Core From Fort Worth

As the title of the record suggests, OZONE is strictly hardcore from Forth Worth, Texas. They have no goals other than helping to build the foundation Texas has built over the years as a center for hardcore. But unlike some of the more notable acts like Power Trip or Iron Age, there is much less of a thrash component to the band. That works in the band’s favor, distancing itself from what people may expect from a Texas hardcore band. There are a lot of different comparison points, but what I hear most are No Warning and Bitter End. Both made their version of New York hardcore through the lens of 2000s hardcore. OZONE does a similar thing but for 2022, giving listeners every type of mosh part you could want.

It seems like Springfield, Illinois, has recently become a vibrant scene for hardcore, and Prevention is one of the bands at the center of it. They play a sort of grab-you-by-the-chest sort of hardcore, backed by chugging guitars. There aren’t any easy comparison points, but I can imagine people piling on top of each other during the heights of the songs. At times I hear a similar energy as Trapped Under Ice, but that may be a little hard for a band to live up to. But even despite those lofty comparisons, Prevention seems to match them on The Search. It’s the band’s most fully realized release yet, making a perfect introduction for those unfamiliar with Prevention.

In some ways, I’m transported back to the 2000s when listening to Rejection Pact. If I close my eyes, you could convince me they were on Lockin Out or Bridge Nine Records. There’s also a healthy amount of Go It Alone in their sound as well. It fits in that nebulous space where youth crew and melodic hardcore meet. But I would never call their newest record CAN WE WAIT? pure pastiche. It instead speaks to the current moment of hardcore, which is, of course, an essential characteristic of the genre. You can feel this if you follow Rejection Pact on any social media. They support the hardcore scene a ton and, most importantly, their hometown of Boise, as evidenced by the now-popular phrase“ Boise on Top” that the Axe To Grind podcast helped coined. CAN WE WAIT? is truly the culmination of those efforts and documentation of Boise hardcore in 2022.

I first wrote about Squint earlier this year when they released their debut EP Feel It. It was an impressive debut that found themselves in what I’ll call hardcore-indebted alt-rock. You can still discern the music comes from people with hardcore mosh literacy but with more of an eye for melody, naming themselves after a Seaweed song. It’s a space we’ve seen thrive lately, with bands like Militarie Gun and Drug Church leading the trend. Wash Away is more of the same for Squint, not veering too far away from what makes them so enjoyable. There are plenty of parts for people to bump into each other and stage dive, of course. But there are enough new wrinkles added, exploring their 90s influences more fully, like on the extended outro of “Seeds.”

Who Decides-Is Anyone Hearing This?

Like many bands of the last couple of years, Who Decides is a pandemic project. It found members of two separate Rochester bands (Taking Meds, Druse) coming together to form a strictly hardcore punk band. According to an interview with guitarist Skylar Sarkis, they drew primarily from Boston and New York. Those influences don’t come through on Is Anybody Hearing This? to Who Decides benefit. It feels like this could come from any region of the country and not feel out of place. And even if you’re taste tends to lean towards heavy hardcore, I feel like you can find something to like in Who Decides.

Reissues are just as important as anything that comes out of the hardcore scene on a monthly basis. It’s the way bands become remembered and reach a younger audience. Without it, they could be relegated to the dustbin and forgotten. A whole swath of bands is only available because of Youtube, limiting their reach. This lack of access matters because, for some, if it’s not on Spotify, it might as well not exist. To alleviate that reality, I’ll try to give a shoutout to one reissue or a new album I discovered each month.

Unless you’re the biggest hardcore nerd, I wouldn’t expect you to have heard of Dying Breed. They are part of the 90s scene called Troycore that has recently become a huge influence on hardcore. There wasn’t exactly one exact characteristic to these bands, but they all lay somewhere in the land of metallic hardcore. You can see its influence most clearly in the work of Colin and Taylor Young over the years. The cookie monster vocals of God’s Hate closely resemble Dying Breed, even if it’s accidental. But even if there wasn’t a connection to the present, Dying Breed is worthy of discovery. Compared to other hardcore that came out around the same time, it doesn’t feel as dated. If the demo came out today, it would be one of the hyped records on DAZE.