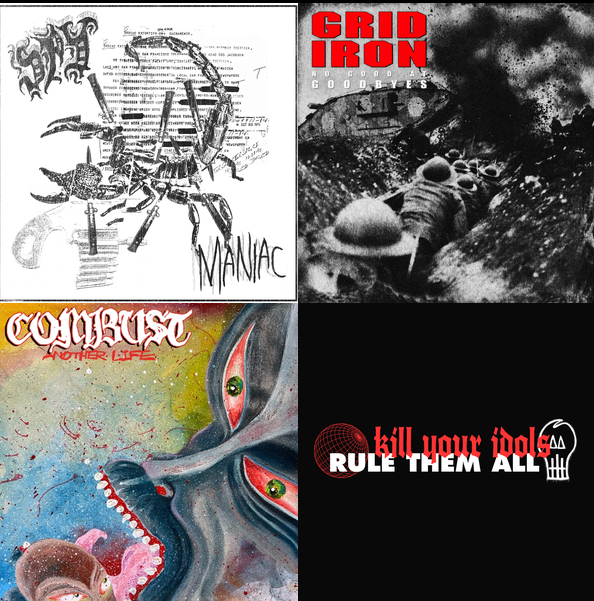 Hardcore is currently thriving and it doesn’t seem to be slowing down anytime soon. As a way to document this current moment, we present Step 2 Rhythm, a monthly column rounding up the best in hardcore coming out right now.

Though there’s been a lot of great stuff in hardcore this year already, March was the biggest month for the genre in 2022. Much of the stuff I’ve covered in the first two months comes from emergent bands who are still in their early stages. Basically, I mean bands that haven’t yet dropped a record and are still in the EP and split period of their career. Though that time for a band is exciting, the real test comes with your first record. It’s where bands become properly canonized and become part of the genre’s storied history. And with Drug Church, Vein.fm., and Soul Glo, we have three major bands at the peak of their powers releasing records. Each of them sits in separate pockets and is a really nice crosssection of what hardcore can provide in 2022.

Drug Church fits squarely in what could be called hardcore-adjacent and really operates as a gateway band to the scene for newcomers. Their last record Cheer did that for me and showed that hardcore could be accessible to someone who primarily listens to indie rock and emo. A song like “Unlicensed Hall Monitor” follows a traditional pop structure while still maintaining a sense of aggression that translates to a live show experience. Once I finally saw them play a matinee at Cobra Lounge in 2018 with Gouge Away something finally clicked and I could see why so many people are so devoted to this scene in the first place. After the show, I was literally bubbling with excitement, which eventually led me to write my first album review for Post-Trash on Burnt Sugar, the second album from Gouge Away.

Because of how central Drug Church was to my own journey I was a little nervous when I first received the promo for Hygiene. Would I still feel the same way about this band four years later or have I outgrown them? Though it took a few listens, those original concerns would fade away. This was somehow even more melodic than Cheer and Patrick Kindlon’s lyrics are still just as biting and prescient. Even though it’s only been a few weeks this record is already a frontrunner for hardcore album of the year.

Just as Drug Church was on its ascent in 2018 we had Vein.fm release Errorzone, a very different kind of record. It was somewhat grounded in the metallic hardcore of its hometown of Boston but there were was something different here, integrating house and bass and drums into the rhythm section. You pair that element with a heavy amount of nu-metal influence and you get something that feels utterly futuristic and peerless. Four years have passed since then and Vein.fm has leaned even harder into the nu-metal elements on This World Is Going To Ruin You. They even recruited DJ Benno Levine to join the band to take what they started on Errorzone a step forward. The end result is some of the most aggressive stuff to come out of the hardcore so far this year.

On another end of the hardcore spectrum, you have Soul Glo and their newest record Diaspora Problems. With this release, they’ve cemented themselves in the hardcore history books, making what many are calling The Shape of Punk To Come part two. It may sound like hyperbole but no one really sounds like Soul Glo and it’s one of the few records I’ve heard in this genre that feels legitimately novel. No one even if they tried could match the cadence of Pierce Jordan or the whirling mania of the rhythm section. It’s definitely a record that people will be studying for years to try to untangle every crevice of it.

While these three records deserve all the praise, they are only the surface of what’s come out of hardcore this month. Read below for my choices for what else hardcore has to offer this month.

If I was to try to imagine a band that best exemplifies New York hardcore it would probably look a lot like Combust. There are tinges of metal influence that Cro Mags and Killing Time perfected in the 80s and 90s while still adhering to the hardcore form. The vocals have that rap-like delivery that just oozes that energy that you only really find in the greater New York area. You get to hear these elements best on Another Life, the debut record from Combust. With its release, they’ve placed themselves along Mindforce and Ekulu for the leaders of New York hardcore in 2022.

No one could predict the impact Deadguy would make when they released Fixation on a Coworker. It came during a time when metalcore was still in its infancy and without a singular sound yet. It would only be in the following two decades that the band would be properly celebrated, culminating in the band’s first show in 26 years during Decibel’s Beer and Metal Fest. And even with how much the genre has progressed, Deadguy still feels so singular. It’s brooding and languishes in the dirge of noise rock in a way much more modern bands don’t. This context makes a new release for the band an exciting development because their story in many ways felt unfinished. But instead of writing a new record, Body Parts unearths material that dates back to the same session that birthed Whitemeat and includes one new song which the EP is named after.

Sam Allen has built up quite a resume the last couple of years with his melodic hardcore project G.I. Bill and playing bass with the ascendant Anxious. With End on End, the band he fronts, we see him playing his most straightforward version of hardcore. It’s straight edge in a very classical sense, harkening back when that described a certain strain of hardcore punk that emerged in the second wave of 80s US hardcore. Though they’ve had a few releases, People Like You is End on End’s strongest entry yet and is a ripping collection of fast hardcore.

Rap and hardcore have always had been in close proximity to each other, occasionally intermingling with each other. You see it especially among a certain cohort on the east coast, bringing metallic hardcore and a rap vocal delivery together in a compelling way.  This connection is most clear when you listen to No Good at Goodbyes, the debut release from Gridiron. The vocals sit atop of everything else especially on the title track, really making it clear that they are the focal point for this barrage of metallic hardcore.

In their band bio, KLONSS describes themselves as the new wave of Japanese hardcore. It’s quite a statement that sets expectations pretty high but the band definitely meets it on their new EP Crow. All the identifiable features that make Japanese hardcore so thrilling are here. The vocals sound like they were recorded in a trash can and have that guttural scream that perfectly compliments the harsh distortion of the guitar. The drums make sure these songs stay in constant movement, never really settling in one rhythmic pocket for too long.

Though they are from separate coasts, Maniac and Spy are bonded by an urge to play frenzied hardcore punk. Song titles like “Clobbered” and “LAST RITES” really drive the point home that this is truly caveman music. But each band is still distinctive enough to make sure this split doesn’t become just a sea of noise. SPY has much more of that Bay Area sound that has become a powerhouse in hardcore, specifically in the vocal delivery which has a bark to its delivery. Maniac on the other hand feels a bit faster and the guitar is the driving force, giving the songs a different life.

Rule Them All/Kill Your Idols Split

Most of the time splits are a great snapshot of a particular point in time that is only really visible years later. This Rule Them All/Kill Your Idols split is a bit different in that it spreads across several generations of Long Island hardcore. But even with the large age gap, there’s a lot of shared DNA between the two. Kill Your Idols started in the LIHC heyday of the mid-90s but never broke to the huge heights of their contemporaries or are remembered with the same amount of reverence as Silent Majority. There is no sense of saltiness that comes through on the Kill Your Idols side though. It is instead deeply self-aware of its place in hardcore right now, particularly on the track “Simple Short, and Fast”. Rule Them All is the inverse and is still in the early stages of being in a band and one of several doing the DC hardcore thing. It can’t get any more obvious than covering Values Here by Dag Nasty for a split with The Fight in 2020. And these newest songs only continue that trend, satiating any listener who loves this particular flavor of hardcore.

As of late, the label DAZE has become one of the main homes for heavy hardcore, boasting releases from Pain of Truth and Foreign Hands to name a few. Their newest release from newcomers Volcano only serves to solidify their credentials. On Volcano’s debut release, we see a couple of members of death metal group Sanguisugabogg bring their own take onto metallic hardcore, making music that seems destined for people to beat each other up to. It’s stuff like this that gives beatdown its name because this is music that legitimately feels threatening.

XweaponX makes its intentions known right at the start of its demo, behind the familiar rhythmic guitar chugging of metallic hardcore with a gang vocal saying “Straight Edge, Weapon X”. That message of straight edge never really wavers and only really intensifies from there. You can’t get much clearer than “People like you remind me why/Straight edge until the day I die”. For some, this lyrical content may make the demo an automatic turn off but it really works for me. A big reason it works is that two of the members (Isaac Hale and Bryan Garris) have really mastered the art of metalcore with Knocked Loose. So anything they touch is an automatic listen for me at this point.

Reissues are just as important as anything that comes out of the hardcore scene on a monthly basis. It’s the way bands become remembered and reach a younger audience. Without it, they could be relegated to the dustbin and forgotten. There is a whole swath of bands that are only available because of Youtube, which really limits their reach. This lack of access matters because for some, if it’s not on Spotify it might as well not exist. To alleviate that reality I’ll try to give a shoutout to one reissue or a new album I discovered each month.

Silent Majority-Life as a Spectator

The Long Island sound that became popularized by Taking Back Sunday and The Movielife really starts with Silent Majority and their record Life as a Spectator. They showed that there was a different lens to which you could use hardcore, putting an emphasis on melody over straight aggression. While it’s been twenty-five years since the release of this record, it is still fertile ground for excavation. You see it with bands like Koyo, Victory Garden, and Stand Still. It makes a reissue of Life as a Spectator still feel vital all these years later.