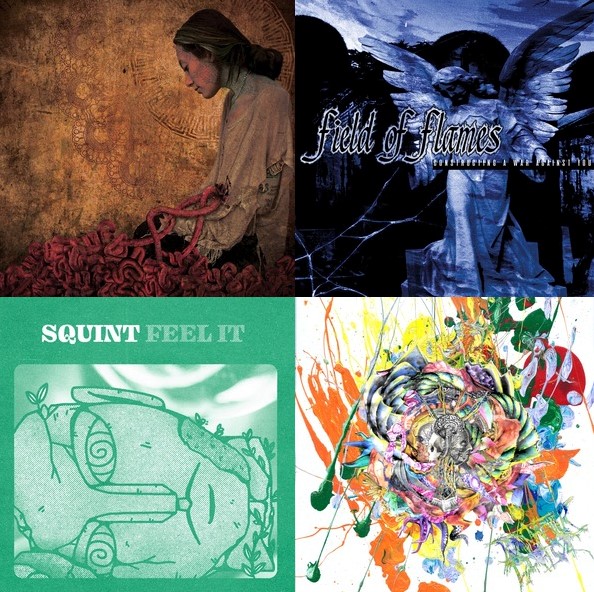 Hardcore is currently thriving and it doesn’t seem to be slowing down anytime soon. As a way to document this current moment, we present Step 2 Rhythm, a monthly column rounding up the best in hardcore coming out right now.

Though Callous Daoboys have gotten plenty of deserved attention, Black Matter Device deserves a look as well. They similarly grab from the well of mathcore and recontextualize it for modern ears. You can hear bits of Dillinger Escape Plan and Every Time I Die on their newest record Autonomous Weapons. But even more so than reminding me of any particular band there’s a sense of maximalism that draws me towards Black Matter Device. Every possible composition is thrown out there, such as a dissonant horn at the end of “Sewer Slide Pact”. It leads to what feels like an engulfing of the senses that leaves my ears ringing after the album is over.

The idea for this split between Broken Vow and Set Straight came up in 2020, back when they first bonded over the internet. Though they are from separate countries, you can feel a sense of kinship when you listen to this split. Both bands similarly grab from the well of 90s metallic hardcore but have their own distinct take. Broken Vow had already demonstrated this with their great EP Sane Minds End last year. While it was firmly influenced by things like Earth Crisis and Strain, there was a strong melodic underpinning that made it stick out from other bands of this ilk. Their two tracks on this split are a bit heavier without sacrificing the melodicism that makes this band stick out. Set Straight on the other hand makes the sort of beefy, hulking metallic hardcore that seems destined for people to flail their arms to.

Field of Flames-Constructing a War Against You

Unless you haven’t been paying attention you’ve heard a lot about the hardcore scene converging around San Jose and the Bay Area as of late. In particular, it’s become a hotbed for the kind of ass beating metallic hardcore that ranges from the beatdown of Sunami to the crossover stylings of Drain. Field of Flames is the newest entrant and is really representative of what the scene provides, emerging with a standout EP that came out last year. It even does my favorite thing for a band of this style, starting off with an instrumental intro. It’s been almost a year since its release and we have a follow-up and a debut record from the emerging band. Constructing a War Against You provides more of the same from Field of Flames, making the same blood-curdling metallic hardcore that one would expect from the band.

Last year Home is Where emerged as a player in the emo scene with I Became Birds and became a mouthpiece for the burgeoning fifth wave emo scene. This split with Record Setter is different though, seeking to create something that is unabashedly trans. The songs themselves are about trans issues and even the art itself is made by a trans artist. And on Home Is Where’s side, we see them fully pivot into hardcore and feature Pierce Jordan of Soul Glo on one of their songs. For me, it’s a welcomed change for the band and makes me excited about the prospect of a second record. Record Setter’s side of the split is a bit of a change too. It’s the first recorded material with their second guitarist, Parker Lawson, who many may know as the singer of Two Knights. It adds an extra dynamic to a band that I was already sold on, as their last record I Owe You Nothing was one of my favorites of 2020.

PUFFER to me is hardcore at its most elemental, harkening back to when this was just a genre of sped-up rock music. The guitars are more reminiscent of MC5 than anything from the modern hardcore cannon. The lyrics are without the typical polemics, focusing more on melody than trying to make any grand statement. “Live and Die In The City” is just a fun phrase for a chorus and devoid of any big meaning in the best way possible. This approach ultimately makes for music that is fun above anything else and a good argument that hardcore punk can still feel vital in 2022.

SPIT! starts out as many hardcore have before, choosing to crawl rather than run. It’s only in the final seconds of “intro” that they really reveal themselves as lovers of fast hardcore. From there they only continue to show off their chops, veering between powerviolence and more traditional hardcore. This dichotomy makes for an extremely engaging listening, as listeners have no idea what is to come next. It’s really reminiscent of Ceremony on Still Nothing Moves You before they moved away from powerviolence entirely.

I’ve said it in previous iterations of this column but I’ll say it again: melodic hardcore seems to be in a really good place right now. Some of the most hyped bands right now (Militarie Gun, Fiddlehead) come from this lineage even if it’s accidental for a few of them. Squint, a brand new band from St. Louis fits in very nicely with the cadre of bands reimaging melodic hardcore, grabbing from the melodic tree of Seaweed and Turning Point. There are even some moments on Feel It, their debut EP, that remind me of Drug Church before they fully embraced their pop sheen on Cheer.

The Flex-Chewing Gum For The Ears

Any hardcore band that lasts for over a decade is a feat in itself. This is a genre where bands burn out quickly, maybe leaving behind one LP that will be remembered. The Flex has been able to endure, now reaching the very rare third record with Chewing Gum For The Ears. There’s a self-awareness that permeates their oi tinged blend of hardcore punk on “Last Ones Left” for example. At a different time, they were lauded as The New Wave of British Hardcore. But now bands like The Chisel and Big Cheese are leading a new generation that The Flex runs right alongside.

Convulse Records over the past few years has become one of the main homes for hardcore punk, boasting releases from GEL and Candy Apple to name a few. With the label’s ascent, their hometown Denver has become one of its benefactors, even hosting a festival last year. And this newest split from Raw Breed and Video Prick is a perfect example to expect from the label if you are a newcomer. It’s fast and without any pretension, keeping hardcore as primitive as possible. So if you like your hardcore closer to punk than metal then this Video Prick/Raw Breed split may be for you.

Reissues are just as important as anything that comes out of the hardcore scene on a monthly basis. It’s the way bands become remembered and reach a younger audience. Without it, they could be relegated to the dustbin and forgotten. There is a whole swath of bands that are only available because of Youtube, which really limits their reach. This lack of access matters because for some, if it’s not on Spotify it might as well not exist. To alleviate that reality I’ll try to give a shoutout to one reissue or a new album I discovered each month.

It can be hard to imagine a time when beatdown didn’t exist in hardcore. It’s so prevalent in the genre in the present-day that you cannot go to a local show without seeing an act that comes from this subgenre. But there was a time nearly three decades ago when beatdown was not yet a codified term because metallic hardcore was still a new phenomenon. One of the bands responsible for helping shape beatdown in its nascent form was Bulldoze. They took the constituent parts of New York hardcore and beefed it up a little bit. There was more of a groove in the rhythm section, differentiating itself from the crossover sound of NYHC in the late 80s.