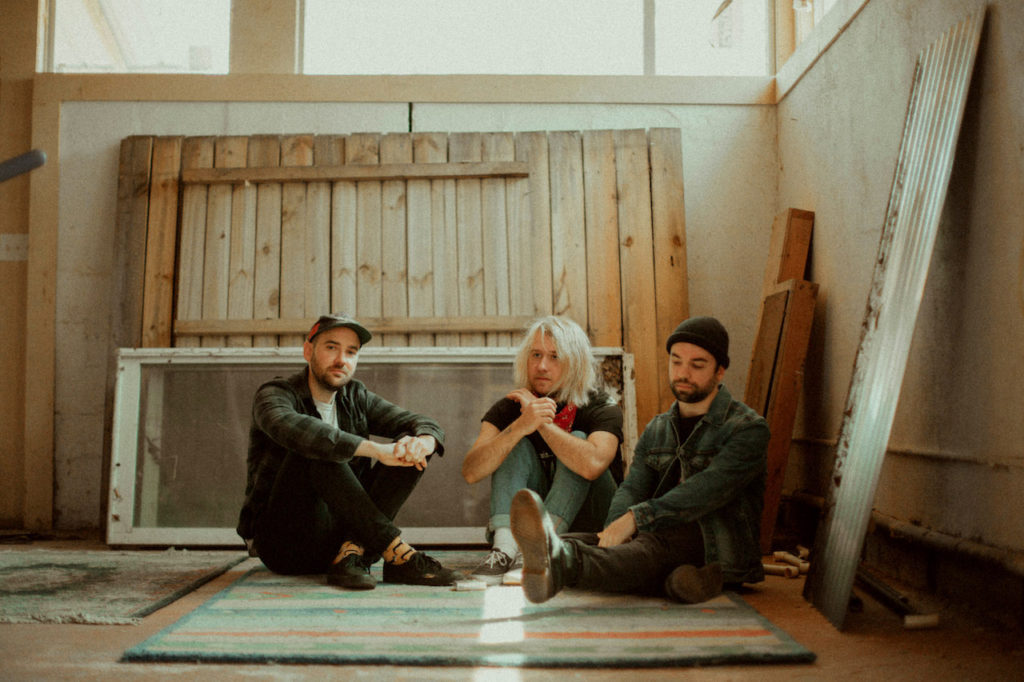 Premiering the surging indie track “Drip Drop” by MIGHTY. The song features a hook-centric refrain and dynamic guitars that are laced in different effects, especially during the chorus. Each vocal melody is woven together tightly with an emotive grace, whether it’s the muttered bridge or the whispered outro. The opening of the song is more bubbly than where the song ends up, transforming with a candid honesty. Take a listen to the tune below and be prepared for their upcoming self-titled release, out May 18th via songintheair.

“Drip Drop is a picture of growth and change in the seasons of life. That was a huge part in the writing and recording of the song, not just what it’s about.” – MIGHTY

Bio:
“The big joke when we were working on this record was, ‘Oh, this is never coming out,’” muses MIGHTY frontman Angelo Fiaretti. As it turns out, he was right: What you’ll hear on the self-titled debut LP from the Atlanta-based band is definitely not the same album they began working on in 2016 – but MIGHTY isn’t the same band, either.

For the better part of a year, the singer had been laboring over a batch of garage-meets-grunge songs with producer Daniel Gleason (of indie rock band Grouplove) – songs they thought were good enough to comprise the follow-up to 2015’s Bye, Have Nice! EP.

But they instead ended up mining a new emotion, one that served as the impetus for wholesale change and the underpinning of what both the band and album would eventually become. What started as a de facto solo project for Fiaretti in 2012 has now grown to a trio – with bassist Joseph Dempsey and drummer Cameron Latham rounding out the ranks to transform the singer’s musical blueprints into a gripping collection of vulnerable indie-rock.

The feeling that ultimately led them there? Doubt.

Doubt has followed Fiaretti nearly his entire musical life, dating back to his teenage days as a staple in Pittsburgh basements and DIY punk spaces. But instead of pushing those feelings of second-guessing down, he finally let them steer the ship this time around.

So the band scrapped an album’s worth of songs and started from scratch, unafraid to let darkness and doubt creep into the subject matter of MIGHTY’s songs – whether relating to the world at large or even themselves.

That acceptance ultimately broke through in a big way, resulting in songs like the dreamy, anthemic “Drip Drop” and the visceral energy of “Safe And Sound”: songs that showcase both where the band has been and, more importantly, where they are now. They’re standouts in the most confident, brazenly honest MIGHTY material to date – a testament to what can happen when you embrace uncertainty, as unnerving as it can be.

“The whole record is a bit like, ‘Fuck, am I doing this right?’” Fiaretti says. “‘Undertones’ was the song that changed everything. There’s a sense of disappointment there in something or someone you believed in. Having your perception of someone shattered so much ended up moving the record to something where I could talk more openly about the darker aspects of my life.”

Welcoming that darkness helped elevate the songs that originally made up MIGHTY from good enough to exactly the record the band needed to write. It’s an album that closely examines our flaws as humans, throwing an arm around the ugly parts of both ourselves and others. Most importantly, it uses any sense of doubt Fiaretti felt as a catalyst, lighting a fire for raw emotion that gives MIGHTY an undeniable edge among its most memorable alternative rock moments. As individuals and a collective work, the songs are intimately personal yet ultimately universal – all at once a lifeline for those who need a helping hand and a cathartic look back into the singer’s past.

“On stage, my brain takes me back to where I was when I wrote the songs,” Fiaretti says. “It’s really hard to deal with, but it feels really good. I wouldn’t do this if there weren’t some sense of a communal experience and connection with the audience. It’s like therapy.”

You can pre-Order the album now