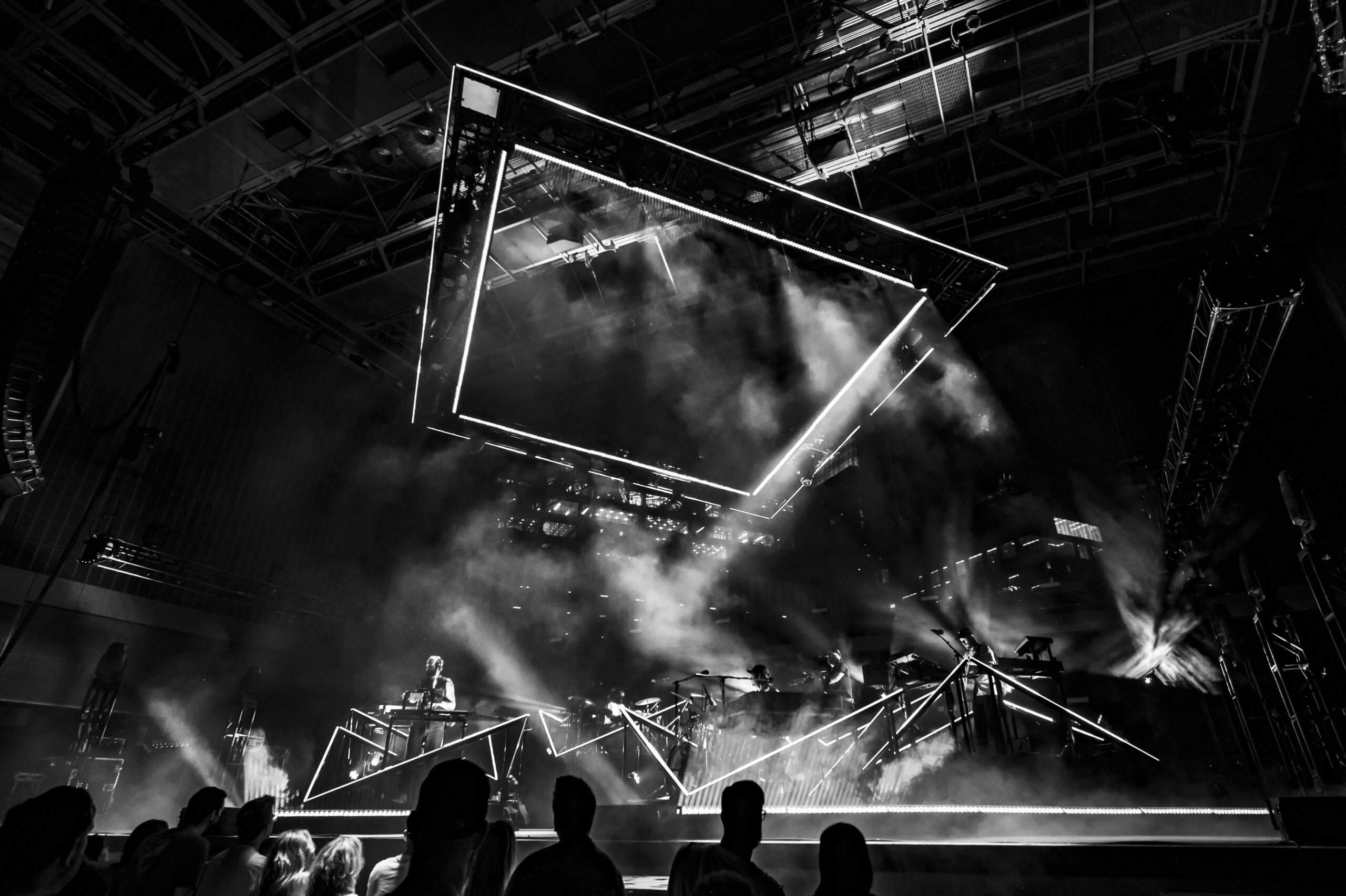 On Friday, Bon Iver made their return to Nashville for the first time in years and with their biggest crowd yet, played a sold-out show to nearly 7,000 people at Ascend Amphitheater.

The night held a sticky heat from the week’s record-breaking temperatures and unsaid tension from the overturning of Roe v. Wade that occurred less than 12 hours earlier. Some concert-goers even walked in with their handmade posters from the pro-choice protest that happened at the state’s capitol just blocks from the venue.

But once the night’s opening act, Bonny Light Horseman, took the stage, things felt lighter. The sky began to set into a mix of blue, pink, and orange as their folksy indie sound cut through the air. Through soaring harmonies and delicate storytelling, the group intertwines traditional folk songs with their own unique sound. 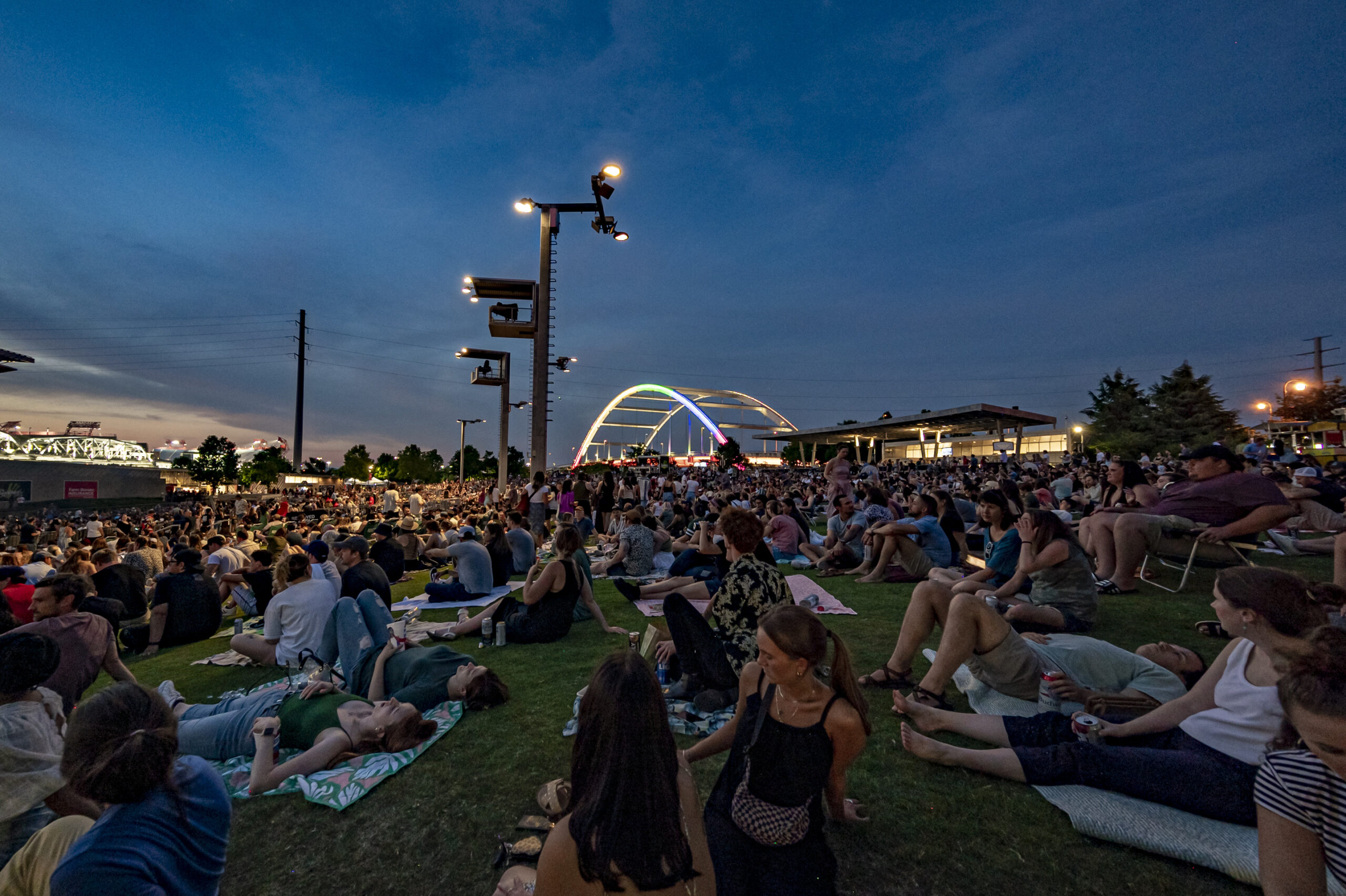 As Bon Iver took the stage, they were bathed in an array of green and purple strobe lights as they opened their nearly two-hour set with “10 d E A T h b R E a s T ⚄ ⚄”. Largely pulling from their most recent albums, 2019’s i,i and 2016’s 22, A Milion, the five-piece band brought their electronic sound to life through rich, layered vocals, and distorted production that was matched by the beams of light surrounding them. 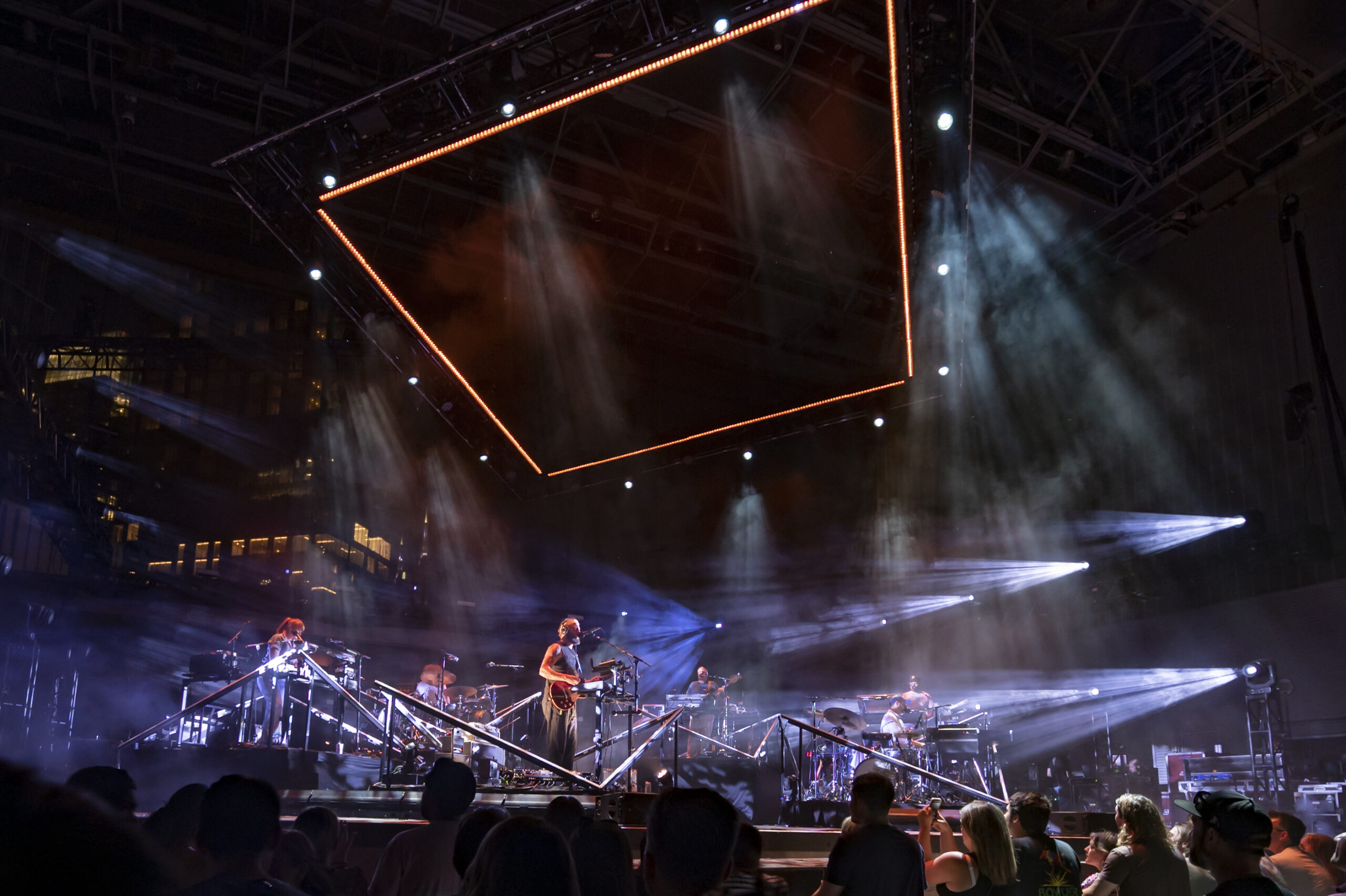 As they made their way through their set, they were joined by Bonny Light Horseman’s guitarist, Josh Kaufman, on “Salem”, providing an extra layer of intricate guitar work. Without much pause throughout the night’s set, Justin Vernon did briefly take a moment to thank the crowd for coming out and said “if you need a ride to an abortion clinic, call us, no questions asked” which was met by a round of applause. He later followed it up by telling the crowd, “hope you can spread love wherever you go, it’s been a weird fucking day.” 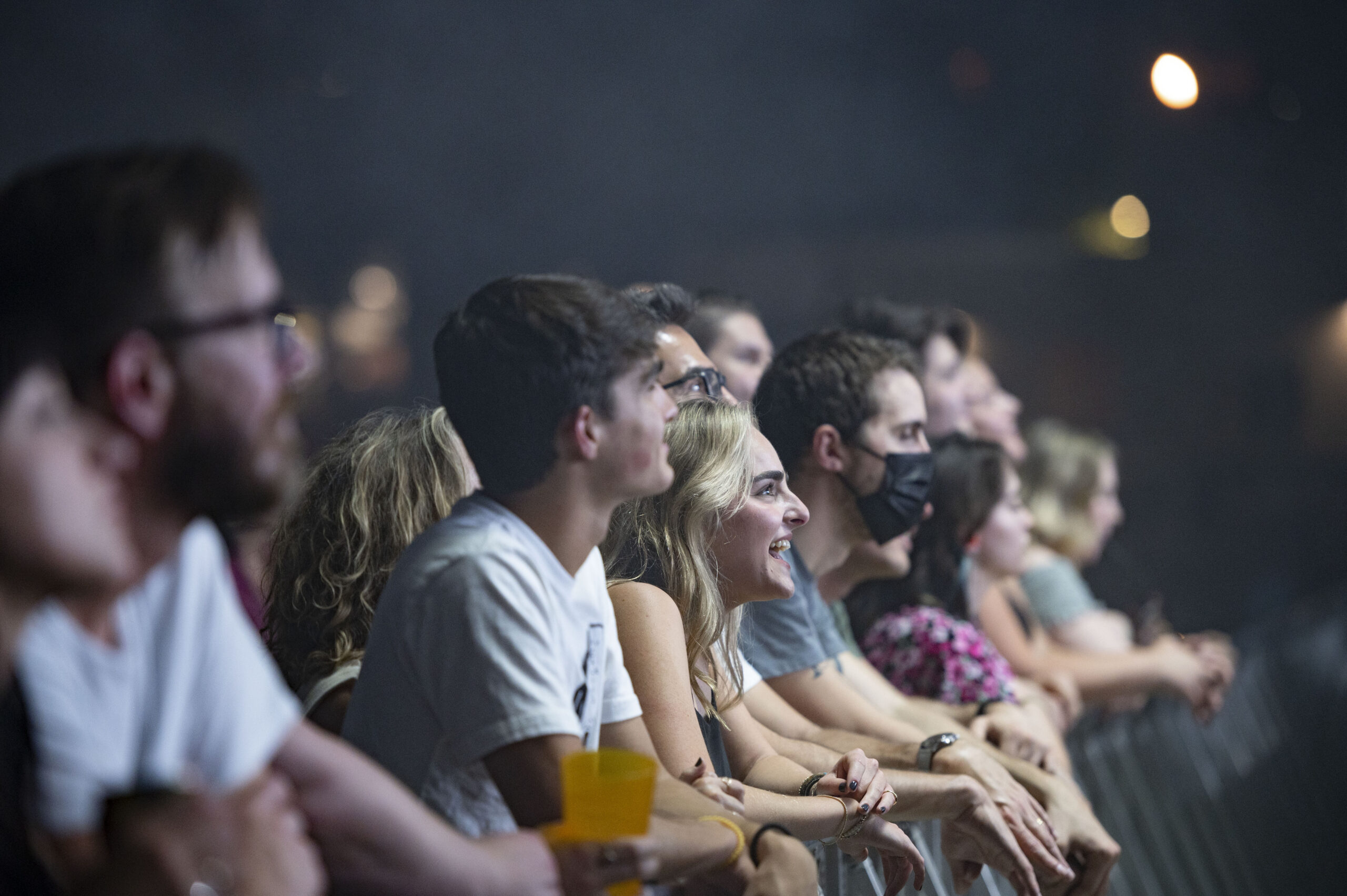 But even with the day’s heavy news, their talents were unshaken. Their ability to wrap a listener in sound from the night’s quieter acoustic moments, like “Holocene”, to feeling the bass synths deep in your chest with “715 – CR∑∑KS” is so mesmerizing, it’s almost indescribable. Whether you’re an old fan or brand new to their sound, it’s an experience you won’t forget. 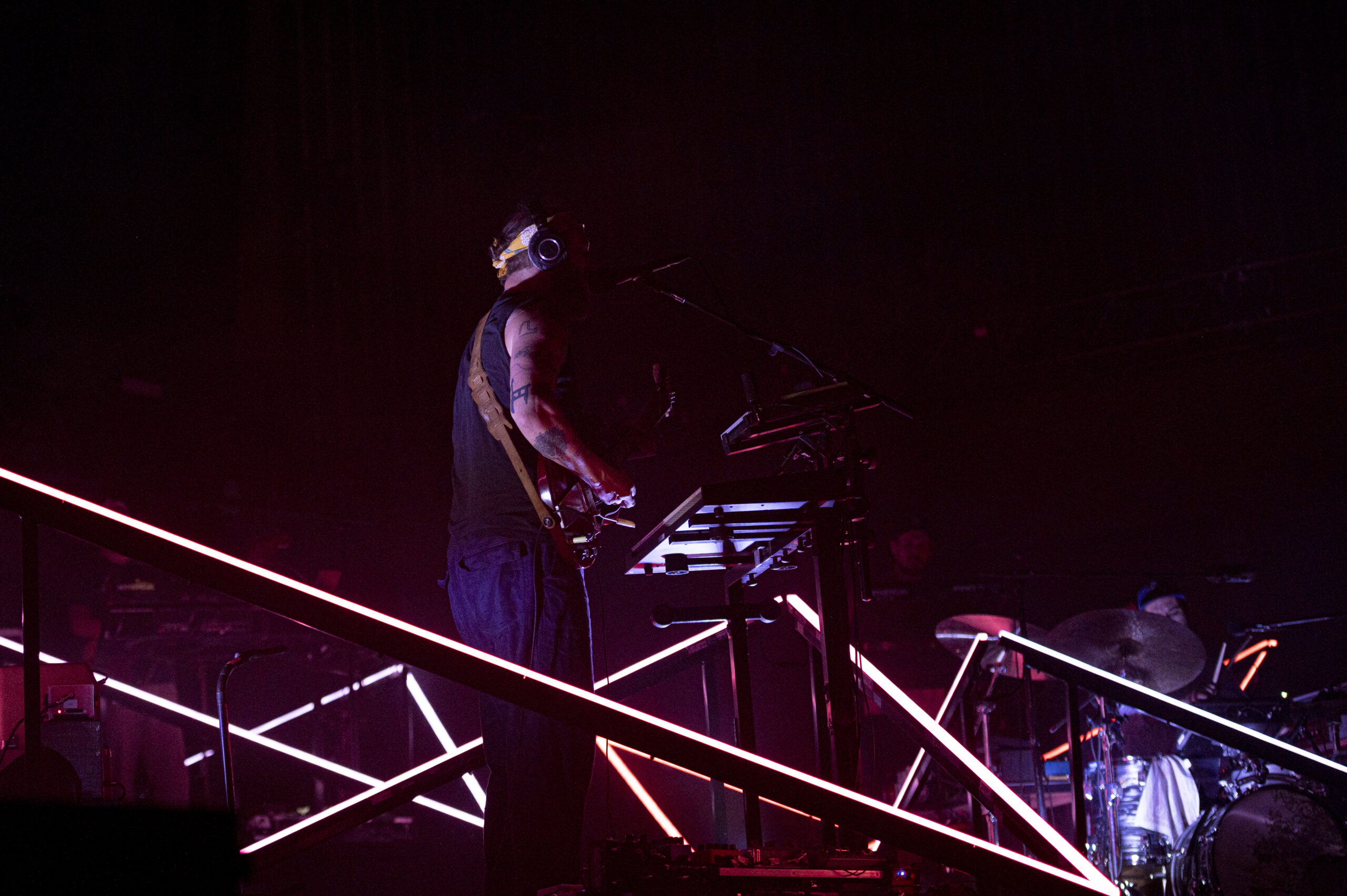 And soon enough, Justin thanked the crowd for the final time and the band walked off stage. They quickly rejoined to finish the night with “Rabi”, a truly somber note focused on finding safety in those around you. And as their live show proves, nothing feels safer right now than being able to immerse yourself in the sense of community music can bring.