Home  >  Photography: ‘Not Me, Us’ Collaborative Book

Photography: ‘Not Me, Us’ Collaborative Book 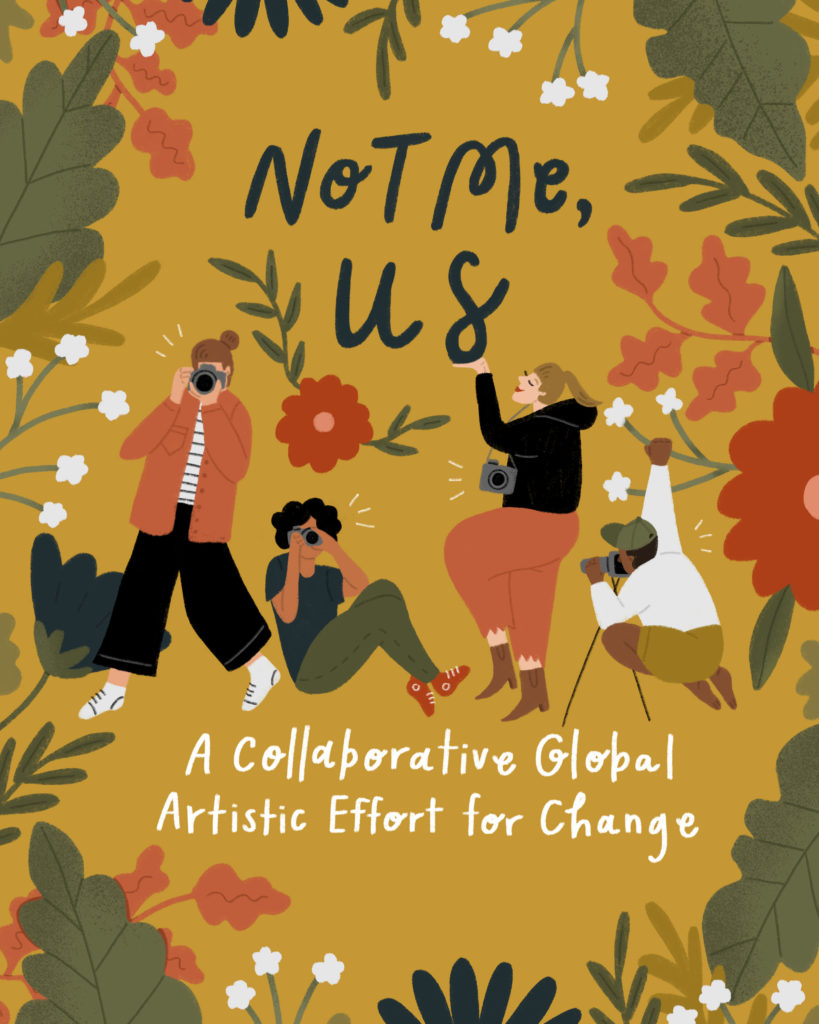 COVID-19 has resulted in millions of people feeling lost and completely alone. With unemployment on the rise, health care workers in dire need of protective equipment, and death tolls skyrocketing in some states, it’s hard to even find the guts to get out of bed some mornings. Practicing self isolation and social distancing leads to an even bigger void many of us wish to fill with the warmth of a hug from a close friend or family member telling us everything will be okay. However, there are countless other ways we can practice empathy and help our peers in need while still being half way across the world. This is just what, photographers, Benjamin Lieber and Eric Soucy sought to do with their new collaborative photo book, Not Me, Us.

Not Me, Us is a collaborative photo project with 100% of the proceeds going to One Fair Wage to help gig workers affected by COVID-19. One Fair Wage is a program aimed to help end unjust minimum wage throughout the country. They are offering cash assistance to hourly workers affected by the pandemic, and have even been endorsed by Bernie Sanders. Not Me, Us offers nearly 200 pages of unreleased work from 100 artists across the nation.

I spoke with Lieber and Soucy about the project to gain a better understanding of its roots and purpose. Soucy explained, “We wanted to shine a light on the fact that in this crisis there are a lot of people in this country who are not going to be able to afford their bills, afford to eat, or afford to take care of themselves. We want people to realize there’s strength in community and in empathy.” 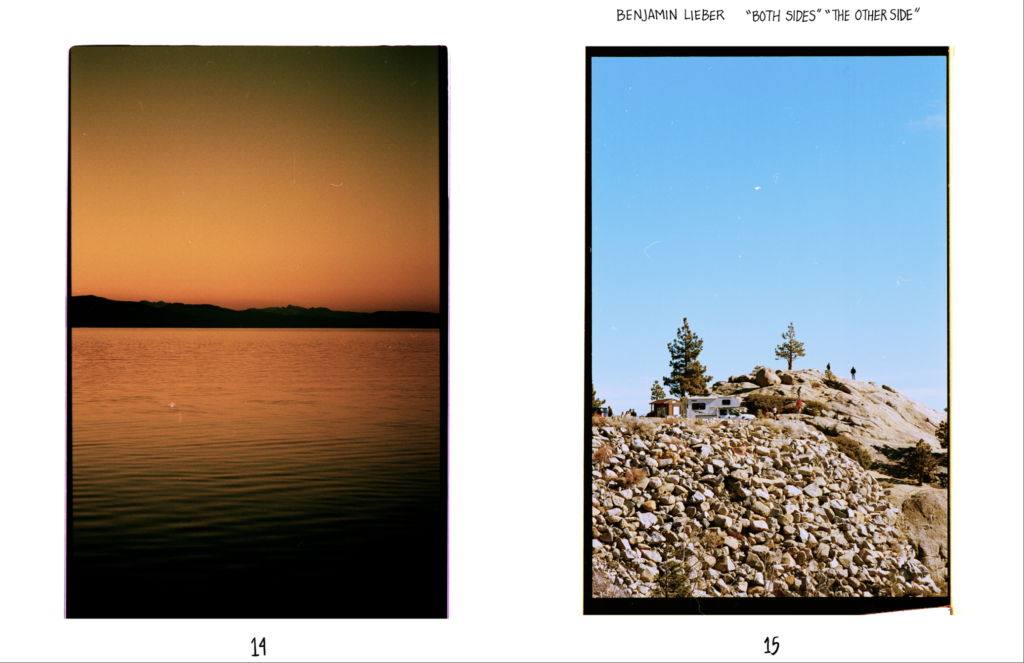 Benjamin Lieber “Both Sides” “Other Side” – Page 14-15 @benjaminmlieber

How did you come up with the idea? What was some of the inspiration behind it?

Lieber: Eric and I had been talking for awhile about working together on something to benefit a cause we both believed in, but to be honest, we really had no idea what to do. We were in the talks about a month or so ago, and had tossed the idea of doing a “split” photo book, kinda like bands do with songs; but there was definitely a daunting element to organizing that level of work in such a short time. The more we thought about it, we were like, “why would we just limit this to two artists? There’s artists all around the world that we both know that feel the same way”. Once we settled on the idea, things really started going down with COVID; cities started shutting down. Eric and I are both here in NYC and we definitely feel the brunt of this experience; but we are both alive and okay, and will be okay. But that was the main motivation behind this project; that there are a lot of people who won’t be okay. 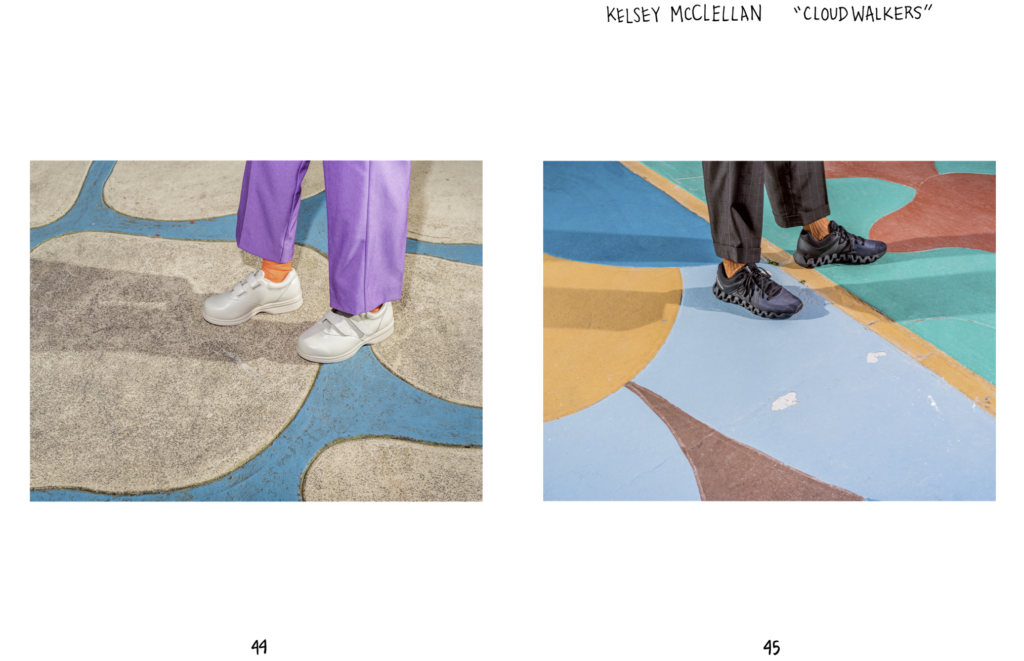 “I live in the outer sunset neighborhood of San Francisco, CA where many houses do not have front yards – just driveways and patches of concrete extending from the sidewalk to front doors. Some of the houses (or their owners) have seemed to have attempted to remedy this concrete blandness by adding painted designs (mostly nicely shaped blobs) to their “yards”. I don’t know anything about how these painted driveways originated, but the houses in the neighborhood were mostly built in the 1930’s-50’s. They are impossible to miss when strolling by foot, and you can also find them throughout a few other neighborhoods in the city – like the Excelsior & Sunnyside. We wanted to highlight these special places with nicely paired sneakers (or what we call “cloud walkers” – not quite athletic or orthopedic shoes), socks and pants of a person we imagine walking by. The objects were also things we thought this someone might have around their colorful driveway – a set of dropped car keys, an old newspaper, car washing tools, an extra special flower arrangement.” -Kelsey McClellan

What is the main goal behind the project?

Soucy: The only goal was to help the most vulnerable people in the United States. 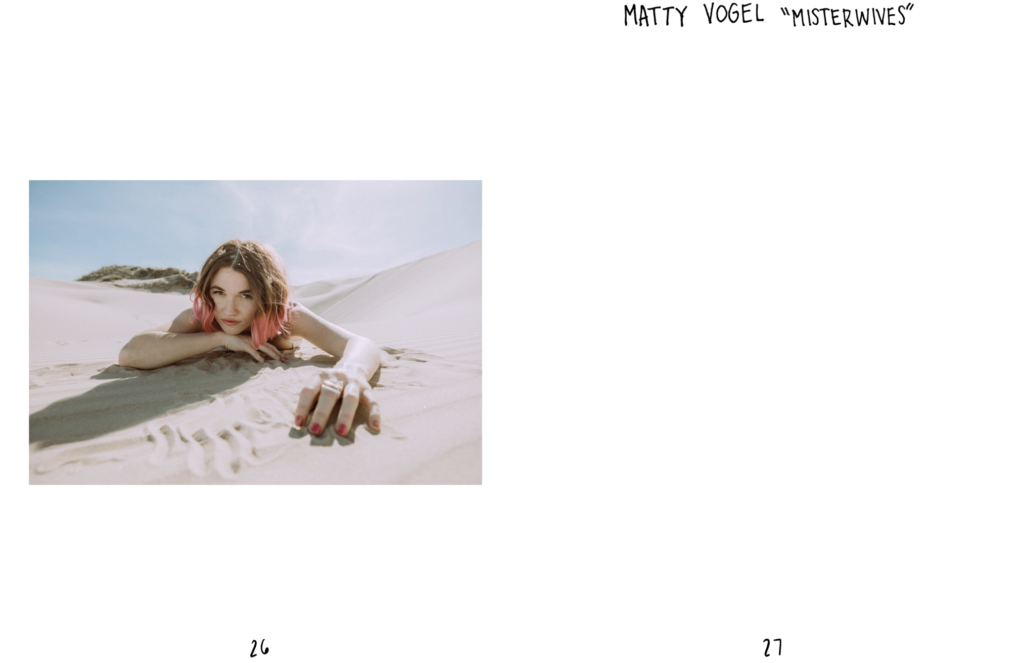 Why is this important to you?

Lieber: Artists are gig workers. Artists are largely self employed; if not fully, at least to some degree. In a lot of ways, the very people that came together to make this book also are feeling significant blows from this pandemic. But the point is, when we all join efforts together for a movement bigger than any one of us alone, we are stronger. We can create something more integral, that can actually radiate some change. There are leaders working their hardest to create change that is necessary in America who have instilled this value into the very core of their leadership, and it has proven time and again that the human race was meant to work together. It’s the reason that New York City will be okay. It’s the reason the world will be okay. None of us are truly alone, and it’s a really empowering thing to feel/realize that. 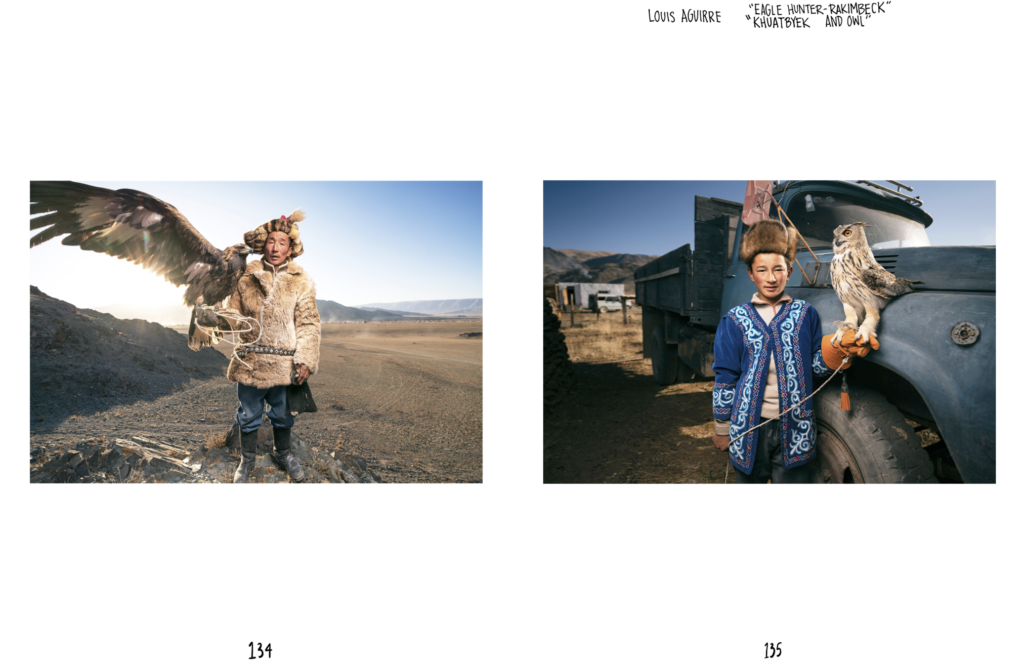 “It was always a dream of mine to travel to Mongolia and photograph Eagle Hunters. In October of 2019, I finally had the opportunity. The people were humble yet inviting. Their traditions sawn into their daily lives, and the landscapes as beautiful as the people it’s inhabited by. The experience was more than I could’ve imagined.” -Louis Aguirre

How long did it take to get everything together?

Soucy: This project came together in exactly two weeks time. There was the initial planning phase, which took a few days, and then we reached out to as many people as possible to get an idea of who wanted to be involved. We were fortunate that there was a positive response from all the artists we asked. The positive response helped this project snowball from an idea to a completed book in less than a week and a half. 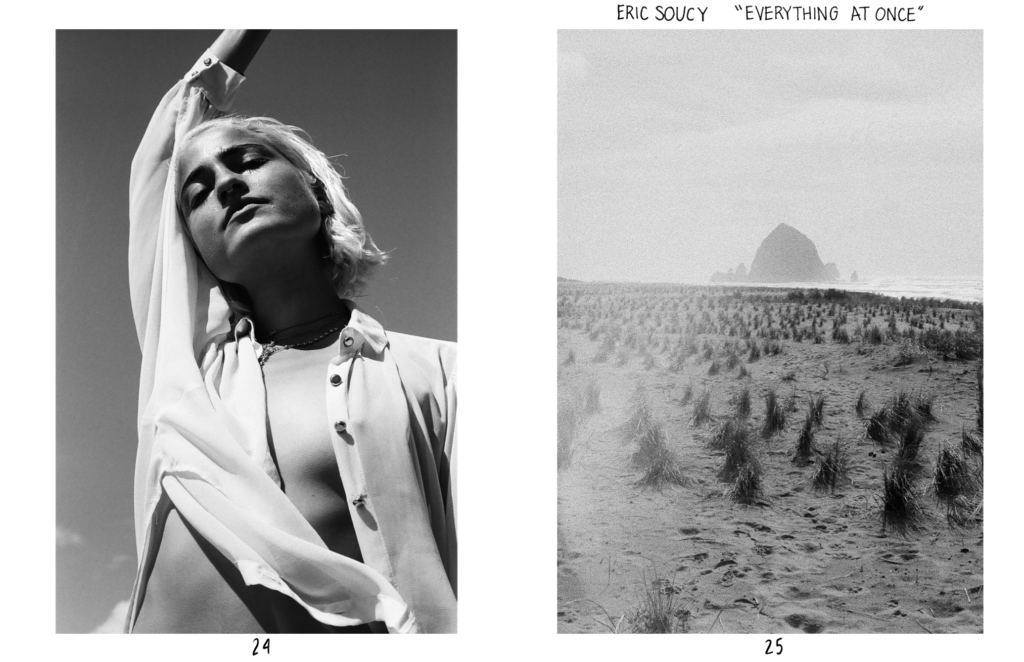 How did you decide which artists to include?

Lieber: There was no exclusivity here. Anyone who wanted in got in. Through both Eric and I’s artistic careers we’ve had the great pleasure of making friends with many talented people all over the world. It was really easy to start organizing artists once we decided on the idea. We literally both just went through our phone contacts and started hitting people up. We also have been lucky enough to reach some artists that neither of us personally knew, but the snowball off the project allowed us to develop a relationship with; which is what this is all about. 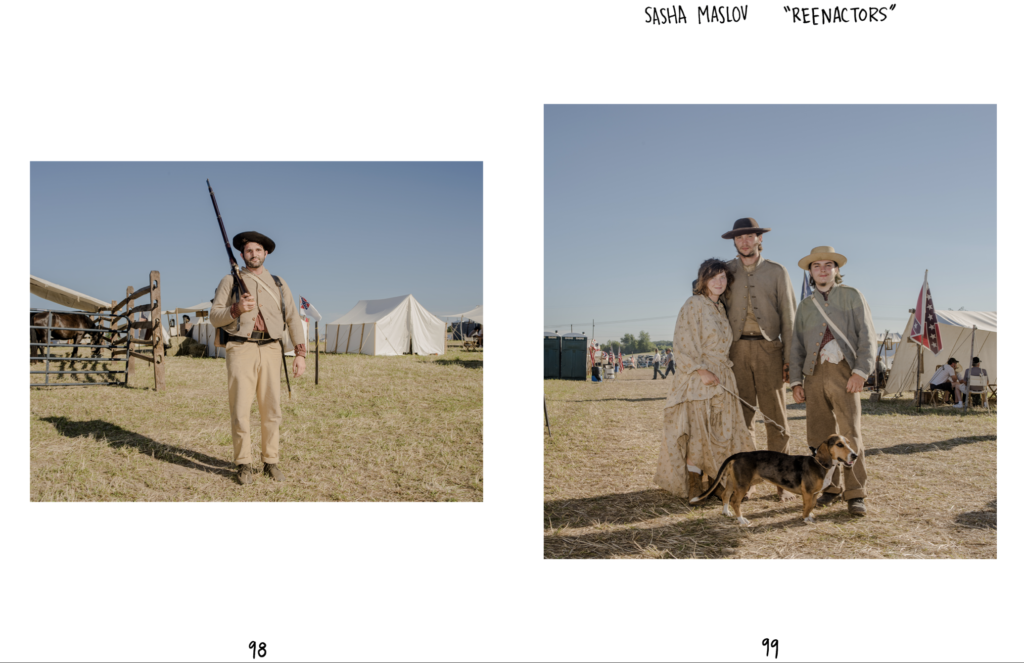 “Every nation forms its own relationship with its past. This relationship changes as years pass and history being reviewed and rewritten, and bloody events of the past are re-interpreted in one way or another. Americans pride themselves on their past as a revolutionary, independent nation that was able to free itself from the oppressors, help others, and spread freedom around the world. Many Americans view the history of their country through this angle, often glorifying events of the past that they find representative of America but conveniently ignoring other events, especially more recent ones. This series looks at one of the outcomes of this strange relationship between the past and the present in America and looks at people who are recreating that history and becoming a living museum of their own interpretation of the past.” -Sasha Maslov

Were the pictures seen in the book taken specifically for this project?

Soucy: The pictures were not taken specifically for this book. The book is a collection of unreleased work from all the photographers involved. Each photographer was allowed to choose any photo they have taken and that they thought fit the project best.

What do you want people to take away from the book?

Lieber: At the very least, please just take away some good vibes from some beautiful artwork *laughs*. There is an impeccable amount of talent squished between these pages; Honestly, that’s the coolest part about the whole thing to me. The diversity and the unique eyes. There’s a ton to learn from other artists perspectives in this book, which has already proven valuable to myself. I also hope that this book can serve as a great database for those who may be looking to hire an artist for a project; here’s 100 artists in a huge variety of styles and skills who all are hurting from getting jobs swept out from under them. But most of all, I hope that viewers take away some inspiration/hope/motivation to keep thinking positive, that we are not alone in this, and to help our neighbors because without them we aren’t everything we could be. 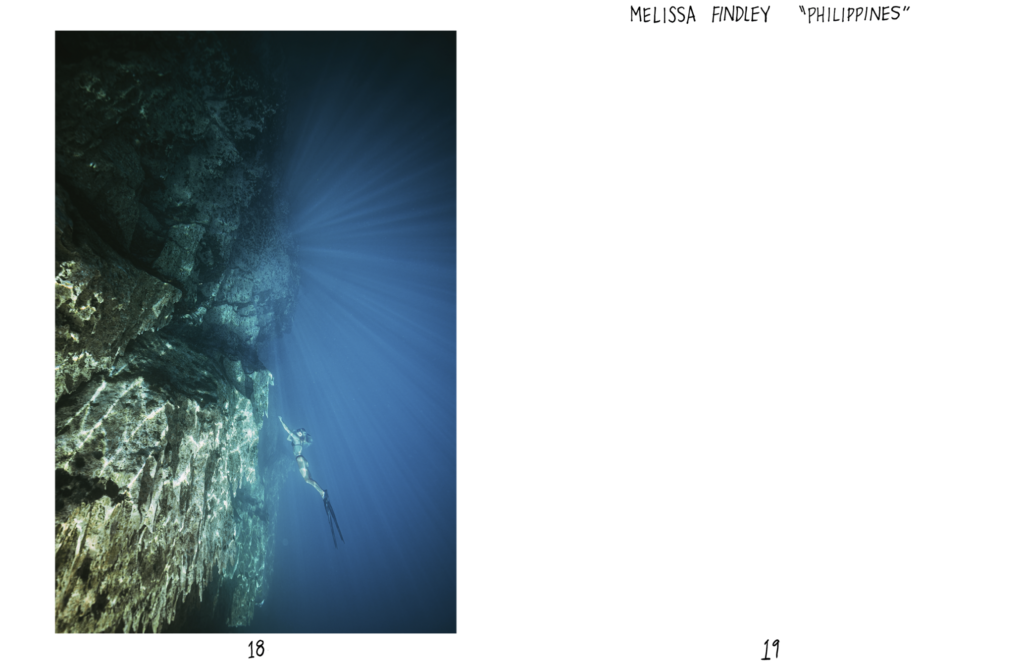 “In February, I spent a few weeks in the Philippines exploring and freediving with one of my best friends.
Slipping below the surface daily, to a place where time stills as all the noise of a modern, chaotic world fades away.” -Melissa Findley

Can you explain a little bit more about where the proceeds are going?

Soucy: 100% of the proceeds are going to an organization called One Fair Wage that will directly write checks to people that apply for their services. Every penny raised from this project will go directly to their emergency fund, which means not a penny is going to a CEO, staff, or any other expense from the organization. Their goal as non-profit is to provide cash assistance to tipped workers (restaurant workers, car service drivers, delivery workers, personal service workers, and more). They don’t discriminate based on sex, gender, citizenship status, or ethnicity. Our goal was to make sure this money went directly into the hands of the people that need it and OFW does exactly that.

Anything else you want to add?

Lieber: We hope everyone enjoys the book! We all, and I speak for all the artists involved, worked really hard on it. From every artist that contributed, to Laura Supnik’s illustrations on the cover, to Frankie Ruggiero’s impeccable handwriting throughout the whole book, to Keagan O’Brien’s beautiful biography in the beginning, and to Eric and I’s organizing. Take your time with it, there is so much there. We all are stuck in quarantine for the foreseeable future; enjoy some amazing art!

Also – If you don’t feel you can contribute the full price of the physical book for whatever reason but still want to support the cause, you can purchase just the digital copy for only $10. Let’s raise some money!

Pre-Order Not Me, Us