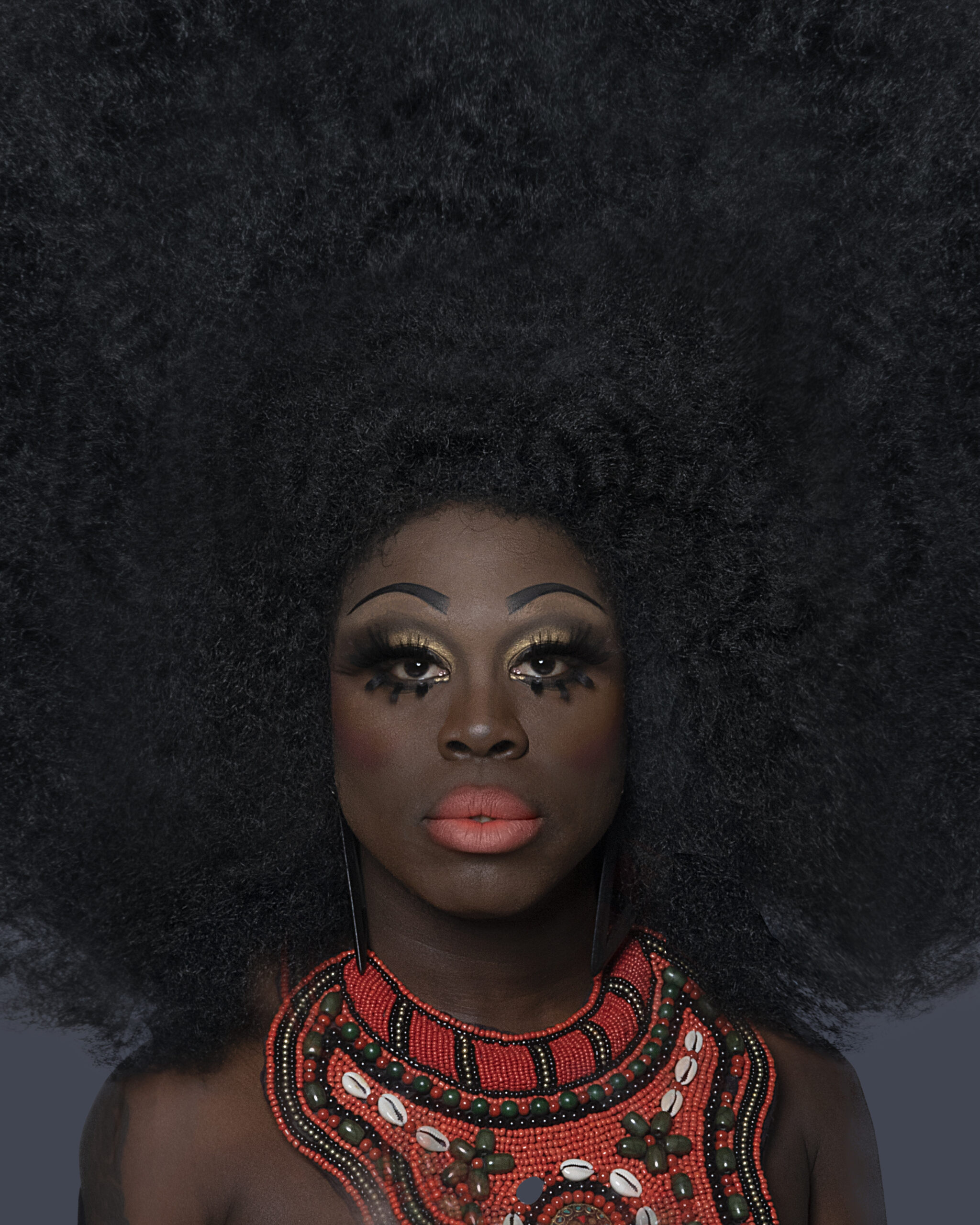 Long before I was an editor for The Alternative, I was an avid reader and a firm believer that the ethos of this publication is exactly what the DIY community needed. This has long been a space that celebrates artists that exist within the alternative spectrum in a way that publications like Vulture or The Ringer have with art-forms that are considered to be more mainstream. One piece of the puzzle that was missing from The Alternative was something that really shone a light specifically on the queer side of alternative culture. I’ve spent a good chunk of time since joining the team trying to figure out how we could go about doing that without having the content feel ham fisted.

Today, I’m excited to share something that I feel does just that – the first of what I hope to be many pieces of queer-focused content to the incredible platform that is The Alternative. This is the inuagueral Monday’s Are A Drag, a monthly piece where we sit down with queer artists and drag performers to discuss creativity, their upcoming work, and spotlight queer artitsts that we feel deserve the eyes and ears of the masses. I’m honored to say that our first guest is the incredibly talented stand-up comedian, celebrated podcast host, Emmy Nominated producer of HBO’s We’re Here, and the winner of RuPaul’s Drag Race Season 8, Bob The Drag Queen! We discuss her transition to digital content creation, her approach to comedy in the face of the ongoing Covid-19 Pandemic, and what’s next for her.

In the last couple years, you’ve really embraced digital content creation. What was the initial inspiration for that leap?

Honestly, it was the quarantine. I found myself with [laughs] a lot more time all of the sudden with the quarantine. I was focusing a lot on these tours and live shows and I realized that you really can reach a much wider audience on the internet and through television. And, you know, it helped get my podcast going, which felt really nice, and doing my YouTube Channel and my makeup videos. So it was honestly because of the quarantine and finding myself with a lot more free time.

What would you say is the most challenging aspect of adapting to a nearly completely online presence?

Trying to stick to a schedule has been pretty tough. I have a tendency to overwork myself and maybe do a little too much, which is a note that I’ve been given, which is valid [laughs]. I tend to go overboard and overexert myself and trying to stick to a schedule is really, really tough. So finding a group of people that you can really work and can be reliable, y’know?

And, besides being able to interact more with fans, what has been the most rewarding?

I don’t want to say besides, because I feel like being able to interact with fans is probably one of the greatest parts. You get to form a very intimate relationship with your audience.

Which platform has been your favorite to create for?

Speaking of, I know that apart from Sibling RIvalry, Monet X Change has a podcast with Lady Bunny called Ebony & Irony. Have you ever considered branching out and doing something on your own in the podcast space?

You know, I’ve thought about it. I had this idea for a podcast a while back that I was working on, but it ended up being a lot of work. It was called The Complete Works of Whoopi Goldberg, where I watch every feature film that Whoopi Goldberg has ever been in since the dawn of time, and I started filming it and recording it, but it ended up where I was trying to get somebody from every film to be a guest on the podcast. And when you go back pretty far, it becomes pretty hard to reach some of those people.

Yeah, I think so! I mean, I really love YouTubing and I wish I had the foresight to get into it earlier, to be honest. But, yeah, I definitely see myself continuing with the platform for sure. Actually, if you watch my YouTube Channel, you’ll find that a lot of the reviews and stuff that I do – I already do a lot of that stuff from the road. A lot of the stuff that I’m doing is, like, fully not from home. So I’ve already figured out how to incorporate traveling into that content.

While we’re on the subject, you’re currently on tour, right?

Yeah, right now I’m traveling around doing some stand-up, which I’m really excited about. And then in the Spring or Summer, I’ll be touring again with Monet X Change, so this year has a lot of traveling for me. And of course, that’s happening simultaneously with filming for We’re Here.

How do you make all of that work? Obviously, We’re Here, has you traveling all over the country. I’m curious about how that works with touring and other live events?

I have a really great team that helps me with scheduling. Scheduling is my greatest downfall, but one thing I am really good at is showing up on time! Like, if it’s in the calendar, I can get there on time.

How excited are you to be back on the road and performing for a live audience?

I mean, I’ve done a few shows already in Salt Lake City already and it felt really amazing. I love being on the road! I love telling jokes, I love making people laugh – it’s my greatest joy, to be honest.

Do you think that the pandemic has affected the way that you approach comedy? And how would you say that your set has evolved because of it?

Well, I certainly mention it. I don’t wanna like…you can’t not talk about the elephant in the room, you know? I think it’s like a sign of the times. For example, when Trump was in office, a lot of people were talking about that, and in the height of the quarantine people were talking about that. I think, just in general, it’s just topical humor about my experiences and about politics – I don’t mean politics as in like public officials, more like political things– and because it’s the way that I observe the world. I think that my comedy will always be a sign of the times through my own experiences.

What advice do you have for young queer artists that might find it diffcult to create in this time?

Well, I like to give myself a schedule. Especially because if you’re doing something creative, it’s hard to stick to a work schedule because you feel like the work is so fun. Once it starts to feel like work, that’s when it starts to get daunting. And it’s important to love what you’re doing completely and wholeheartedly. I think that it’s okay to sit back and look at it as something you love while also working. Especially if you tell your fans that you have something coming on a specific day. Imagine if RuPaul’s Drag Race was like, ‘We couldn’t get a new episode of Drag Race out this Friday. We just couldn’t do it.” And it’s okay to ask for help! Especially if the relationship is beneficial for both of you.

Are there any smaller queer artists that you would like to shout out?

How much time do you have? I could be here literally all day. I’ll give you three examples. The  first is my partner Ezra Michel, who is an incredibly talented musician who has some really great music videos out. One is called “Girl Baby”, which I directed myself. There’s another for “Ballad of 41st Street” which was directed by Brianna Hammer. He [Ezra] is a really remarkable artist that’s trans-masculine, first generation, and I just think that he’s really inspirational. I also really love Ocean Kelly. Ocean Kelly is a remarkable drag rap artist that is based out of Atlanta, GA, that is just so smart, so funny, and so creative. And on top of that is an insanely hard worker. And the last is Be Steadwell. Be Steadwell is a non-binary musician that has this great song that I love called “Gay Sex.”

You mentioned that you directed the music video for “Girl Baby.” Are there any other artistic avenues that  you would like to explore?

On Sibling Rivalry, you and Monet had talked about doing a Speakerboxxx/The Love Below type record. While we wait for that, is there any new Bob The Drag Queen music coming?

Yeah, I was actually just working on stuff with Ocean Kelly. We’ve been finishing up some music and I’m actually very excited to be releasing it very, very soon. I just don’t have a date for you, I’m sorry.

Be sure to catch Bob The Drag Queen on tour! You can find a list of their upcoming dates below.