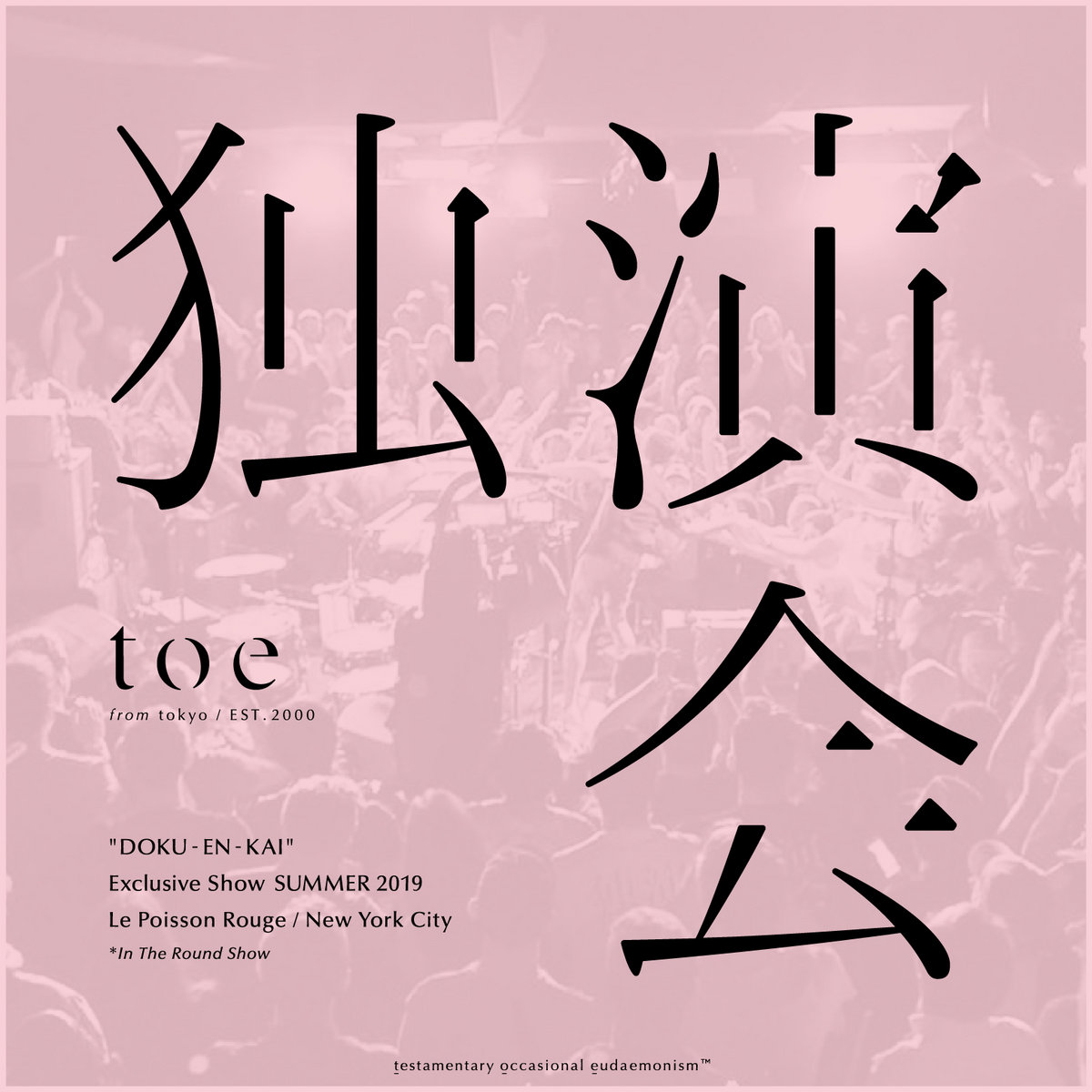 The most we can do right now is look really closely, try and slip into someone else’s shoes. With the pandemic undermining all of live music, we kind of have to do without the communal thrill of watching our favorite bands play. No arm against arm, no shouting to the rafters. No showing up to the venue alone, waiting for that loss of self-consciousness that allows for a meaningful pointer finger in the air or an embarrassing little dance. No sweat, no snapped videos, no “sick set!” We had bigger problems this year, but it’s still a loss that hurts.

So when I put on DOKU-EN-KAI, the new performance film from the essential, legendary Tokyo (mostly) instrumental rock band toe, I lean in real close. I spot one of those cheering audience members in the middle of the floor. And I try to imagine that I’m standing where they’re standing, where they stood on August 28, 2019 in New York City’s le Poisson Rouge. And I get to feel their goosebumps just for a moment.

I usually don’t think it’s that easy to really get into a performance film like this. Often, I kind of see them as stopgaps, reminders that a band is still out there in the world during a pause between records. Great if you have time, nice to put on in the background, but no big deal to miss out on. 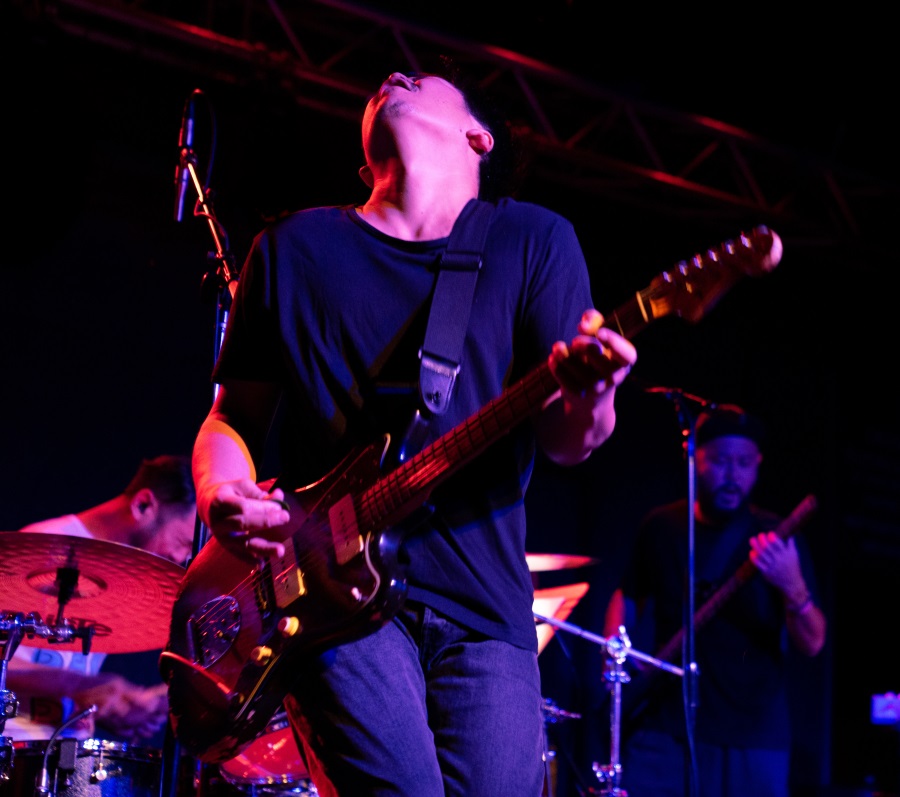 photos shot by Kyle Musser in 2018

This is not the case with DOKU-EN-KAI. Toe’s full-length concert film is immersive and engrossing, riveting for the entirety of its duration. If you’ve ever been a fan of the band’s spindly, spidery recorded work, you will not want to miss this. If you’re a newcomer, DOKU-EN-KAI is an excellent place to dive in and get acquainted. 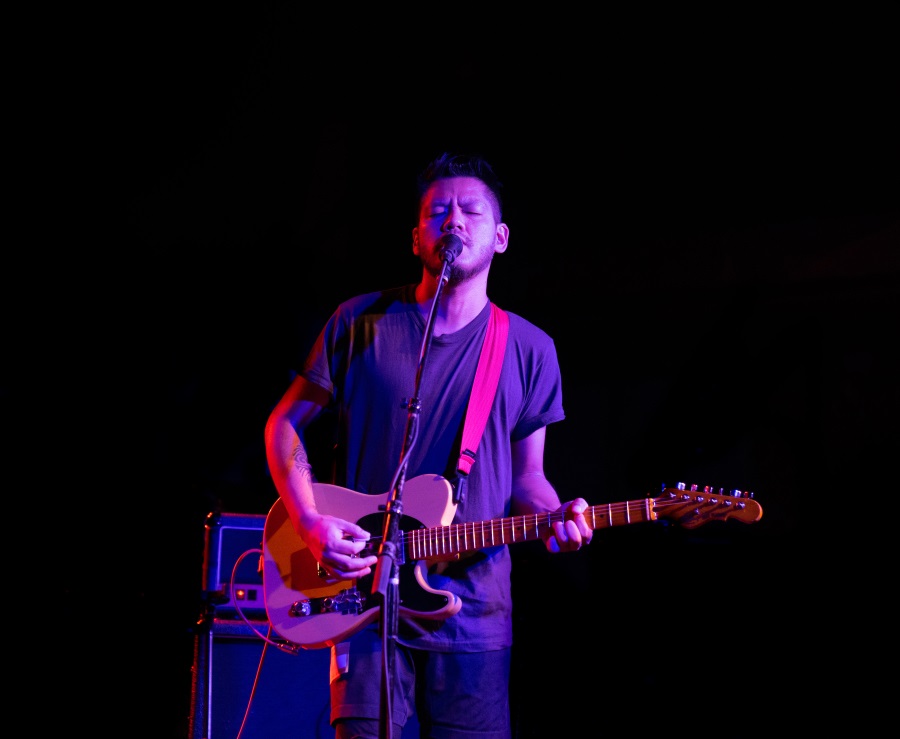 Formed in 2000, toe’s innovative and surprising instrumental music draws from post rock, math emo, and jazz to create spontaneous and energetic compositions that feel emotional and crucial. Directed by Josh Coll (who has also been at the helm of music videos from bands like The Wonder Years, Kississippi, and Foxing), DOKU-EN-KAI features songs from most of the band’s major releases. While each of these releases has a distinct style and feel—from dusky experimentalism of 2005’s the book about my idle plot on a vague anxiety to the spiky unpredictability of 2009’s For Long Tomorrow to the sparser, more deliberate feel of 2015’s Hear You—the performances here feel very much of a whole piece. The caustic power of something like “Esoteric” sits gracefully next to the patient build of “Because I Hear You,” creating new and complex relationships between songs that were written years apart.

During the film, toe performs on a stage that sits in the center of the floor, the concert goers surrounding the band. Often, it seems to me that guitarists Mino Takaaki and Yamazaki Hirokazu, bassist Satoshi Yamane, and keyboardist Keisaku Nakamura are also facing inward, looking toward drummer Kashikura Takashi and his sporadic, potent beats. This makes a lot of sense in a number of ways, not the least of which is the fact that Takashi’s drums tend to be the heart of toe’s world in their recorded work. On a song like “The Latest Number,” I find myself craning my neck to get a glimpse of what Takashi is doing behind the kit, feeling for the power of those subtle but tricky beats. toe’s songs operate like explorations of a strange and uncanny rhythm, and DOKU-EN-KAI literally centers that fascination with movement at the core of the experience of their music.

We get glimpses of that audience, get the chance to watch their smiles break out when a certain track gets started. These onlookers are generally as well-lit as the band members themselves, Coll’s occasional overhead shots giving an impression of isolated unity for the entire lot, everyone in the room gathered in a warm yellow center of an otherwise dark space. During the film’s most affecting moments, like the expectant opening section of first encore “Goodbye,” that temptation to step in and imagine you’re standing among that collective gets stronger. It feels natural to lean in during the song’s slight, fleeting pause. It feels right to join in as seemingly everyone in the room erupts with a resounding, deliberate call of “Umaku todokanai nda.” It makes sense to cheer when the members of toe finally leave the stage, knowing, or at least hoping, they’ll be back up there soon enough.

DOKU-EN-KAI is out now on YouTube and Bandcamp, and an abridged version of toe’s set is also available on Apple Music.