Home  >  It Holds Up: The Darkness — ‘Permission to Land’

It Holds Up: The Darkness — ‘Permission to Land’ 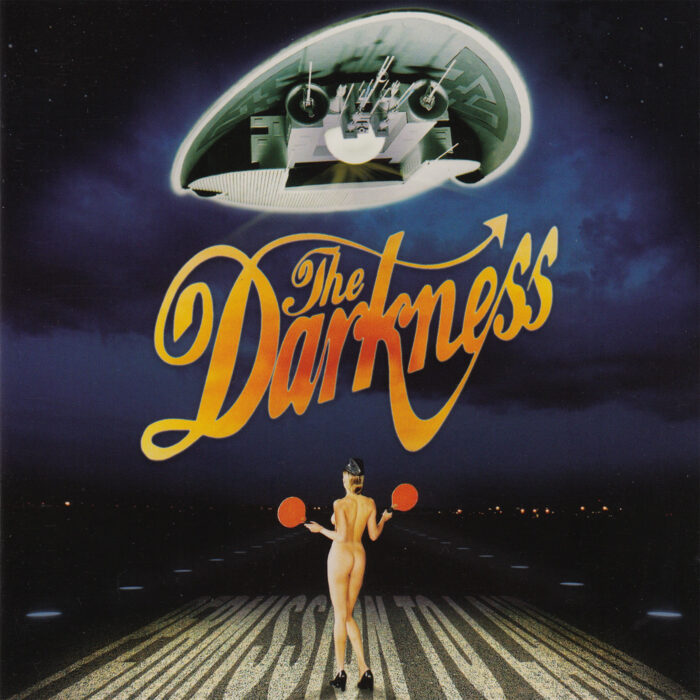 I am frequently nostalgic for the sixth grade, a period in my life when I was no doubt a source of great misery for everyone around me. At school, I had referrals in the double digits, was resigned to spending every lunch in detention and was sent to the principal’s office at least once for belting out show tunes at the top of my lungs. I would fart really loudly in my band elective because it made people laugh. I had learned that authority was bad and stupid and most of the time spineless too, so there were no real, material consequences for defying public school mores.

My adolescent recusancy corresponded to my newfound obsession with music—rock music, in particular. I learned how to use the internet and became ensconced in its little pre-social media sanctuaries—message boards, chat rooms—kickstarting my lifelong interest in shit-posting and exchanging artist recommendations with strange men. (Please do not go looking for posts I made on message boards 15 years ago and discover something to cancel me over.) At the end of 2003 I started spending most of the week with foster parents—I told my school counselor that my parents decided they “didn’t want me anymore.” I got lucky: Todd—my new pseudo-dad—was a fount of musical information. In the car, we would alternate between Grandaddy and Shins CDs and 107.5 FM, Portland’s premiere ‘70s and ‘80s pop radio station at the time. I got chills the first time I heard “Bohemian Rhapsody.”

It was through Todd that I first heard of the Darkness. He showed me the “I Believe in a Thing Called Love” music video with the lasers and spaceships and I was immediately hooked. I was a budding snob but I was not beyond listening to CDs in my Discman. The first album I ever bought with my own (allowance) money was Permission to Land, the Darkness’ staggeringly great debut LP. I listened to it over and over and over and over again. I’m literally still listening to it.

Permission to Land arrived at a time when classic rock possessed some weird cachet with white pre-teens. In the US it hit store shelves less than a month before School of Rock’s theatrical release, and it’s hard for me to separate the two. Unlike the wan algorithm-core of Greta Van Fleet, however—a band that really is just the musical manifestation of that pre-stressed “Led Zeppelin tour ’77” shirt that was a LAN party staple when I was growing up—the Darkness in their heyday were often better than the real thing. “They sort of sound like Queen,” you say? Queen’s best album—1975’s A Night at the Opera—is marred by at least two dreadful, non-Freddie Mercury songs: Drummer Roger Taylor’s “I’m In Love With My Car,” which is literally a song about fucking a car, and guitarist Brian May’s rinky-dink vaudeville pastiche “Good Company.”

The gnarled hesher record store clerks and failed music writers in my network will likely crucify me for this one but I’d argue that very few of the Darkness’ obvious influences—with the exceptions of Thin Lizzy, Guns ’n Roses and, if you have the stomach for Ayn Rand apologetics, Rush—made records as consistent as Permission to Land. That is not to say that those bands are bad at all—certainly the peaks on virtually any Queen album are much higher than those reached on Permission to Land, and a lot of the Darkness’ influences hail from the era when predatory record companies demanded artists release a constant stream of new material, which doesn’t exactly make for flawless records. But there is something to be said about Permission’s gobsmacking consistency; it is merely divided into songs that rock extremely hard—namely, the flawless pentalogy of “Black Shuck,” “Get Your Hands Off My Woman, “Growing On Me,” “I Believe in a Thing Called Love” and “Love on the Rocks With No Ice”—and songs that rock slightly less.

I’m not alone in my tender feelings for this album—that’s why this article is being published here and not on my personal blog. It would seem as if the Darkness’ critical reappraisal is underway or possibly even complete; they’ve gone from one-hit wonders to one-great-debut-album wonders. Here’s the real take: the Darkness released at least one more kinda good album, 2005’s absurdly titled, ludicrously expensive (£1 million!) One Way Ticket to Hell… and Back. On it, lead singer Justin Hawkins got way more personal—the title track is an unflinching portrait of a washed-up coke addict—and outwardly campy. For One Way Ticket to Hell…, the Darkness enlisted the help of Queen producer Roy Thomas Baker, who made them sparkle but effectively stripped them of their obstreperous rock ’n roll spirit in the process. The songs were good but this was the beginning of the end.

In a Pitchfork review of the band’s 2017 outing Pinewood Smile—which is not a very good album no matter how hard you strain—Ian Cohen wrote that, “[Like Weezer], the Darkness now operate in a vacuum that suffocates anyone who’s checked out over the past decade.” I’d say that’s an apt and potentially even generous comparison. The Darkness have always reminded me of another one of my favorite formative bands, Jellyfish. Like the Darkness, Jellyfish were hopeless nostalgists, a convincing simulacrum of rock’s storied past. And like the Darkness, Jellyfish made great music that was sometimes better than the works cited—great music vitiated by a prematurely defensive self-consciousness, the artistically suicidal equivalent of Rembrandt painting a tiny ballsack on the upper left corner of Belshazzar’s Feast.

This is, of course, a self-fulfilling prophecy—it’s been my experience that if you’re self-deprecating for long enough people are going to assume that they can make fun of you, too. Not that they’re fundamentally like the Wrens or whatever but there is nothing inherently, explicitly comedic about the actual music on Permission to Land as far as I can tell. (“Octoped, you’ve got six hands too many / And you can’t keep them to yourself / You’re too fat and too old to marry / So they left you on the shelf” from “Keep Your Hands Off My Woman” even sounds like a particularly cruel Elvis Costello diss.) It is simply joyous, horny and stupid rock music—and that has always been and will always be the most transformative kind.