Home  >  It Holds Up: Nickelback — ‘All The Right Reasons’

It Holds Up: Nickelback — ‘All The Right Reasons’ 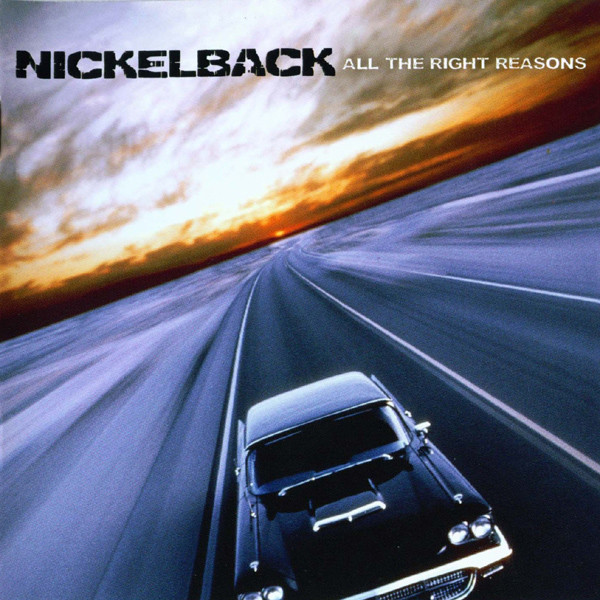 One of my first memories is of me grappling with mortality in the SeaWorld Orlando parking lot. Even at a young age, something about seeing Shamu swim around in that too-small tank sparked a kind of depressive episode in my barely-developed toddler brain. A fragmented version of the childhood fatalism that struck me that day, walking between those rows of cars baking in the hot, humid Florida sun, will dwell in my mind as long as I live. Putting this anecdote to paper likely makes me seem like the type of pseudo-deep person to sit in the back of my local Starbucks, writing poetry in a Moleskine notebook and wearing a suede driving cap, but I assure you that I’m not that type of guy. The only reason I bring it up is because, for years, whenever I heard Nickelback, their music triggered a flashback to that hyper-specific moment of early existential dread.

The first semester of my senior year of college was one of the most overwhelming and deeply unpleasant periods of my life. Between taking six classes, acting as General Manager of my school’s radio station, and, for some reason on top of all that, making a record, I managed to absolutely obliterate my ability to experience serotonin or grasp at any semblance of self worth. As a result, I found myself leaning on the music of my childhood as a crutch to grapple with the overloaded nihilism that arose as a byproduct of trying to finish my degree. Where my playlists were once packed with cuts from obscure, “cool” artists like Squarepusher, Sweet Trip, and AL-90, I was suddenly bumping hits from The Fray, John Mayer, and Fastball. Of these musicians, not many culled as visceral a reaction as Nickelback. While at first I felt embarrassed that I actually enjoyed songs like “Photograph” and “If Today Was Your Last Day,” I just couldn’t fight the feeling that they evoked the same leather-y rock energy that I love so much the one night of the year I get around to cracking open a Coors Banquet and throwing Led Zeppelin IV on the turntable.

Without any semblance of irony or meme-iness, I enjoy Chad Kroeger’s whiskey-soaked songwriting, but, even in spite of the band’s beef with Donald Trump, they’ve undeniably cemented themselves as the trademark sound of exurban conservatism in contemporary rock. Maybe it’s the capitalist fantasizing on “Rockstar,” or the Sweetwater-demo-video-core riffing on “Burn It To The Ground” that begs you to break out the old lawnmower¹, fire up the George Foreman², and spend an evening polishing your gun collection³. While Nickelback are Canadian, there’s something so aggressively American about their unbridled patriotic excess. The fact that they were the musical guest for W.W.E.’s 2011 Tribute To The Troops says everything you need to know about why they fully embody the Butt Rock subgenre “Applebee’s Core.”

On the band’s 2005 record All The Right Reasons, however, they lean into the musical tropes of post-grunge radio rock, catering to your Heartland outlaw aunt instead of that one law enforcement-loving uncle you make an active effort to avoid talking to at your family’s Thanksgiving. This is best evidenced by watching outtakes from their Live At Sturgis concert film, where an endless sea of seemingly wildly intoxicated bikers scream along to just about every word sung from Kroeger’s mouth. It’s far from the most high brow video in my YouTube search history, but after going ten months without live music, I yearn to be four margaritas deep screaming along to the opening lines of “Someday” (“How the hell’d we wind up like this?/And why weren’t we able/To see the signs that we missed?/Try and turn the tables”) more than I am antsy to spend a quiet Sunday afternoon at Ambient Church. Nickelback may be aesthetically and culturally lame, but that’s also why they’re objectively good.

But now, Dear Reader, we have reached the point in this Nickelback thinkpiece where I must acknowledge that, while All The Right Reasons holds up, it is far from a perfect collection of music. Over the course of the album, particularly in its middle section, Kroeger presents as an absolute douchebag: a smooth brained, mid-aughts answer to Kurt Cobain, hopped up on liquor-induced adrenaline rather than sluggish from a crippling drug problem. In all honesty, there are numerous instances throughout the course of the album in which Chad comes across like the type of person who, if I were to encounter him at a bar, would make me find a different watering hole just to get away from him.

This is especially true on the track “Next Contestant” whose chorus “(Is that your hand on my girlfriend?/Is that your hand?/I wish you’d do it again/I’ll watch you leave here limping”) is one of the most toxic collections of words in modern music memory. On “Side Of A Bullet,” we find Kroeger clenching his fists with intense anger as he obnoxiously sings lines like “Uncle Sam taught him to shoot/Maybe a little too well/Finger on the trigger, loaded bullet/He hit the stage so full of rage.” He even throws a manic tantrum on “Far Away, which is gaslight-y as hell with lyrics such as “I keep dreaming you’ll be with me/And you’ll never go/Stop breathing if I don’t see you anymore.”

Ultimately, though, I am fairly confident that Chad Kroeger doesn’t give half a shit that some music writer with conflicted opinions on Autechre thinks he seems like kind of a dick. He’s preoccupied with selling out arenas, getting hammered on his super-nice tour bus, waking up on the outskirts of a fairground in some unbeknownst Red State, and making enough money to buy more cars to sit unused in the driveway of his Cascadia mcmansion. Chad is like a salesman, getting you to spend the big bucks and making sure you come back the next time the band’s playing within driving distance of your bedroom community.

Rising to prominence in the early days of the Iraq War and shortly after 9/11, Nickelback’s songs offer a fenestra through which to view the turbulent societal climate of my toddler years. As someone who was still playing with toy soldiers when the world around me was fixated on the execution of Sadaam Hussein, most of my memories from the Bush administration center around telling my friends “The president is bad” on the George Mason Elementary School playground, regurgitating what I was hearing my parents say at the dinner table. All The Right Reasons is a fascinating relic of the minivan culture of my youth, a look back at the artistic mediocrity of grill-pilled, wartime mid-2000’s suburbia. Nickelback may have their flaws, but I can only hope that as their music continues to age, they are looked at more as a bizarre memento of a now-forgotten mainstream mindset, instead of as the most despicable thing that ever happened to rock and roll.