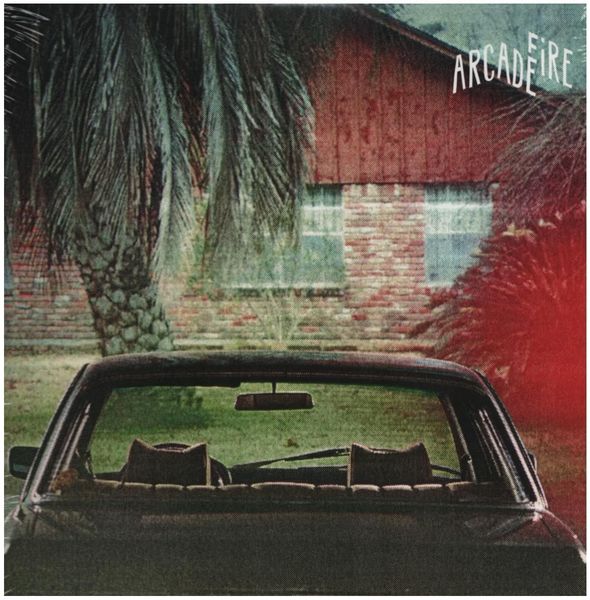 When I think back to albums that left a lasting mark on me, I always think back to the summer of 2011. My many adventures in the duration of that summer were soundtracked by Arcade Fire’s The Suburbs; an album that isn’t about the angst of living in the suburbs, but instead critiques class culture with beautiful instrumentals and arrangements. Although I didn’t grow up in the suburbs, or anything near close to that, the album had a lasting effect on me. The titular track became “our song” to one of my first relationships (I know, it’s cheesy), but songs like “Rococo” and “Suburban War” opened my horizons to different types of songwriting and genre styles. The Montreal-based band consists of a husband and wife duo, Win Butler and Régine Chassagne, along with Win’s brother, Will, and a rotating cast of musicians. The group is a powerhouse for the indie genre and The Suburbs showcases this so well.

The title track is the first song, and probably one of the most notable tracks on the album. Probably played in every coming of age film made between 2010 and 2014, the track is simple and laid back. Including a basic guitar line structure, some strings, and percussion, the track is mainly lead by the vocals supplied by Win Butler. Lyrics such as, “your part of town against mine/I saw you standing on the opposite shore/but by the time the first bombs fell/we were already bored” speaks about the ignorance of war and violence. It discusses class divides and the separation between those who care and those who have a “not in my backyard” attitude. To have lyrics that speak to issues in such a clever way, without making a particular song violent, is one of the many smart things that Arcade Fire does on The Suburbs. The chorus of the song repeating, “Sometimes I can’t believe it/I’m moving past the feeling” recognizes the passing of ignorance in just a few words. Something that the lyrics on the album do repeatedly well.

“Modern Man” is again an excellent track critiquing the idealized life aka “The Modern Man”. Getting a job and keeping up with a traditional lifestyle is a common theme that many artists incorporate into their work. However, this track, like many others on The Suburbs, does this almost seamlessly, without coming across as aggressive. The instrumentals include some guitars, bass, percussion (and some other instruments that I can’t put my finger on) but are pretty simple in nature. Nothing too fancy. However, yet again, the lyrics take center stage. Lines such as, “In a line for a number that you don’t understand/like the modern man” is such a great metaphor for the traditional cycle of adulthood. It’s witty yet poetic in a way. The group is able to discuss topics without them being blatantly obvious or by screaming frustration into your face.

“Sprawl II (Mountains Beyond Mountains)” is a track that Regine takes vocal lead on. Her vocals are similar to Bjork in a sense that they float along with the song. This track is also the most “pop” off the entire album. It has a very synthesizer heavy beat that deviates from the guitar driven tracks that dominate most of the album. Again the lyrics are center stage, the chorus being, “sometimes I wonder if the world’s so small/that we can never get away from the sprawl.” These clever lyrics about the “sprawl” or the spread of “dead shopping malls” rising like “mountains beyond mountains” can be read as that they can’t escape from the spread of capitalism, or another system similar to the one that they’re trying to detach from in “Modern Man”. Again, with the pop aspects of this track, it seems ironic that this might as well be played at a mall.

Although The Suburbs won Album of the Year at the 2011 Grammys, which validated itself as a fantastic album, it spread far beyond that title. With lyrics critiquing society and instrumentals that I still find being borrowed in some bands today, the album is a masterpiece that still stands up. Between the dense, metaphoric lyricism and the witty songwriting complimented by instrumentals, Arcade Fire made an album that stands the test of time. I continue to revisit this album, with all of the memories of that summer in 2011 attached to it. It’s kind of sad that the issues discussed in this album are still being tackled today, but The Suburbs serves as a historical relic not only in the musical sphere but the cultural sphere as a whole.