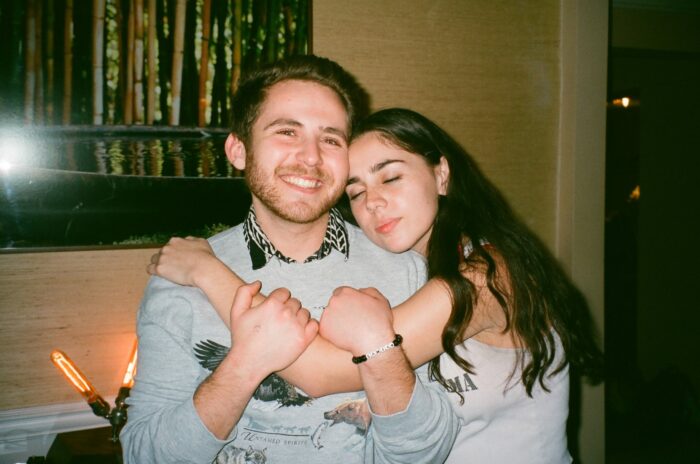 Five years ago, I first saw Noah Rauchwerk play an open mic at the Inkwell Coffeehouse. He wrote songs with his older brother Dan under the moniker The Lords of Liechtenstein, a stripped-down, harmonizing heavy alt-folk band. The room, a small dimly lit comfort food joint planted on the Jersey shore, attracted people more for the ambiance rather than the food. I remember thinking he must really love The Mountain Goats (a wonderful thing). I went up to him afterward and bought an Oh Hello, Sweetie Pie CD. For months, I played it in my car driving West to visit friends in Pennsylvania, speeding in yellowed tunnels into early mornings, and laying on the cold beach drinking hot chocolate from a thermos.

“You could kind of play whatever and try stuff out because most people weren’t listening,” Rauchwerk said. There was one mic and one amp for the room. But mostly, the clang of plates, a popping laugh occasionally, and the persistent ding of a food bell nearly washed over the music. Amidst the chaos, there would be one or two diners craning their necks over the servers moving in and out of the kitchen. “You were kind of fully playing just to them, hoping they could hear the lyrics over everyone talking and the sound of tots frying,” Rauchwerk said. “The pressure kind of lifts when you remind yourself that most people aren’t there to see you,” he ended. That’s all it took for him to take the next step in his music career: touring with Samia Finnerty and garnering the time and energy to start a solo project.

Rauchwerk played drums with indie pop artist Samia and quickly realized the affirmation of an energized room. People were there to see you instead of chatting about their workdays over sugary coffees. “My most intense and special moment in my music career was playing drums for her opening for Donna Missal at Bowery Ballroom. I saw so many shows there in high school and college,” he recalled. “When I got onstage everything just felt kind of perfect and I fully forgot that I hadn’t slept. It just felt like where I was meant to be.”

Unfortunately, that all came to an abrupt halt in March 2020. Like many of us, Rauchwerk spent months in the pandemic working in solitude. He made seitan and vegan cheeses from scratch (which he promised he’d bring me one day), practiced drums, and crystallized memories into songs. During this period birthed his solo project Wormy. Last month, Rauchwerk and a friend drove down to Nashville to visit Finnerty. Like a good, spontaneous trip, they intended to spend time with friends they loved and cared about. Untapped time, much like Racuhwerk’s music, focused on the commitment to the final experience; capturing the best memory, naturally, including the rough patches in-between.

“I wrote “Hungry Ghost” one morning hungover at my dear friend JR’s apartment. I had a really bad night the night before where I realized it just wasn’t going to work out with someone I cared a lot about,” he told me.  “I wanted Samia to sing the second verse because I wrote it about flying out to play a gig with her (and I’m pretty scared of flying),” he continued. She sings, “I’m so afraid of flying that I’m going insane / The wings crack off on the runway / I’ll never know if you texted back.” On that flight, Rauchwerk worried more about this person not texting back than the plane crashing.

Wormy’s lyrics stem from mundane narratives. Details like “There’s this restaurant out on Marcy / So let’s get dinner at 10 am” and “You say you want to see me drum in my band / Eating builders bars at the back of the van,” are complemented with Casiotone-like beats, moving baselines, a heavy pinch of folk, and tons of dynamic. “When we tell our friends about a funny or sad or weird thing that happened, we use an absurd amount of detail, stretching out the story to make sure we didn’t forget anything. I like transferring those details to songwriting,” Rauchwerk noted. “When in doubt, I talk about what flavor of Gatorade I loved at the time.” “Hungry Ghost” was recorded entirely remotely. Initial parts were tracked with Rauchwerk’s good friend Ian Grey in his Queens apartment. Through recording, producing, and mastering, the song traveled from New York to Minneapolis to Los Angeles to Olympia before completion.

Much of Rauchwerk’s early music taste and writing spiraled from “reject CDs” his brother would bring home from review meetings at the college radio station. Though Wormy influences were more DIY bands like Casiotone for the Painfully Alone, Told Slant, and Little Hag, but especially Trace Mountains which Rauchwerk spent a bulk of the lockdown listening to. And of course, he paid homage to the greats: Iris Dement, Labi Siffre, and Lucinda Williams.

“The only real disadvantage was not being able to hang in person,” said Finnerty, in regards to recording. Cooped up in a studio sharing greasy takeout and cheesy movies after long days was something that couldn’t be replicated. But between the duo, the virtual collaboration did help them build something—a newfound and exciting trust in what your friends can do with your music. “I remember the day Noah played me this song for the first time on tour in Nebraska. It was already my favorite song of his. I just remember being totally blown away,” said Finnerty.