Home  >  Interview: The Front Bottoms Are Growing for the Better

Interview: The Front Bottoms Are Growing for the Better 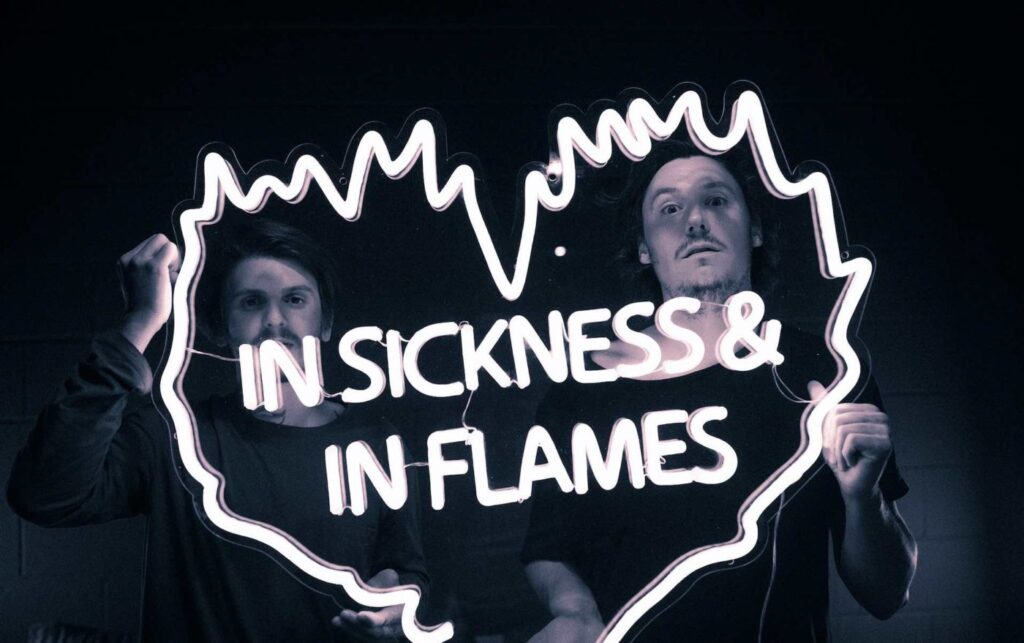 It’s no secret that the Front Bottoms’ catalog is a divisive one. Fans have openly expressed their desire to hear the band return to their roots and deliver something more stream of consciousness and ramshackle than the songs we heard on Back On Top or Going Grey. In the eyes of these fans, the band swapped the emotional honesty of their early work for sleeker, fuller-sounding production. Some might call it “straying from their roots,” but others might call it “growth.” When the band started, they had no idea what they were doing when it came to writing songs. They’ve spent the better part of their career pushing the boundaries of what a Front Bottoms song sounds like, and the reward has been well worth the risk.

The reward in question is their highly anticipated fifth studio album, In Sickness & In Flames which is out August 21st on Fueled By Ramen. With this record, the Front Bottoms have kicked down any walls that they might have built over the course of the last nine years and have delivered their most authentic and comprehensive body of work to date. Sonically, In Sickness & In Flames bridges the gap between their debut and 2018’s Ann, providing an opportunity to unite all corners of their fanbase. I recently got the opportunity to chat with Brian Sella and Mat Uychich to discuss the album, what has changed in the three years since they released Going Grey, and music in the time of a pandemic. 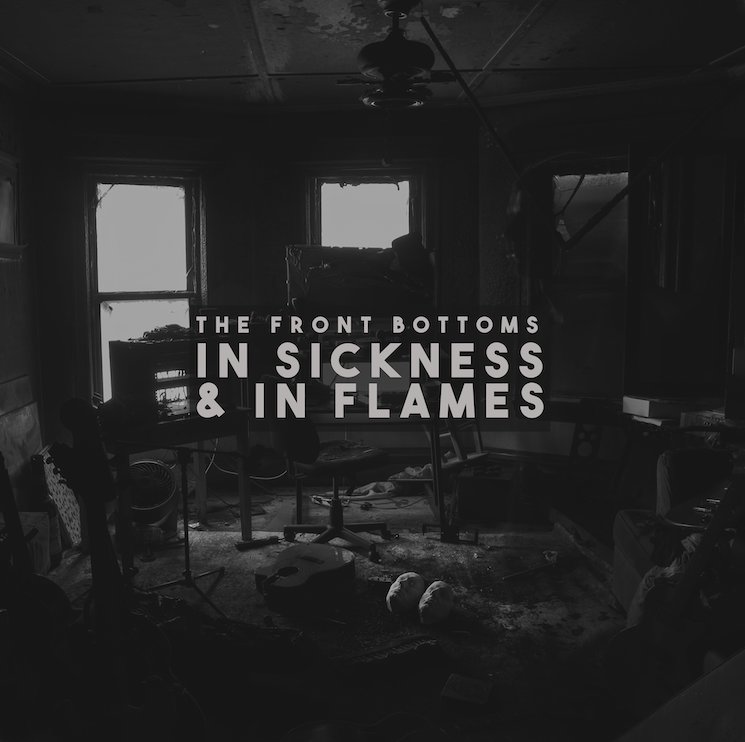 The first question that I ask when I get on the phone with the band is one that I’m sure we’re all a little too comfortable asking nowadays: “How have you guys held up/dealt with the pandemic?” Brian laughs a little before responding, “Well, ya know, a couple mental breakdowns but we’re still here, so par for the course I guess” with the same kind of playful and honest energy that we’re used to getting from the band. We shift gears for a second and talk about the live shows that they’ve been streaming on Twitch every other Friday and how—for both fans and the members of the band—those hour long sets have felt like a much needed break from the harsh realities that we’re facing every day.

We start with the album’s title: right away, it’s made clear that the title was selected before the world started to rapidly fold in on itself. In Sickness & In Flames has taken on a new meaning to the band in light of the current state of the world. Brian says that in the year that the band took off from touring, he and Mat had done a lot of growing up—Brian got married, which in part inspired the title of the album. He says that In Sickness & In Flames was meant to be a play on the idea of the “in sickness and in health” portion of traditional wedding vows. He went on to say that, “You know, last year I had emergency surgery on my appendix, which is where the in sickness part came from. Mat and I also had a separate experience with a property that we were very close with, and had worked very close with, caught on fire, and that’s where the in flames part came from. So that was the energy going into this record.” He continues, “Fast forward 6-8 months and we’ve recorded the album and we’re very proud of it. Right as we finish the record, the pandemic hits. So now, all of these songs have become something totally different. You know, we go back and listen to these songs and there’s lyrics like “I am the virus” (“montgomery forever”) and “It’s like I’m wearing a mask but you can still see my face” (“make way”). But I think that’s how art works. If you’re genuine with it, things just come together and start to make sense, ya know?”

The energy that he mentions is palpable throughout the record. The album feels like a guided tour through controlled chaos. That is in no small part due to the fact that this record addresses a larger swath of the human experience than their earlier sardonic salvos. The days where The Front Bottoms would laugh through their problems or sing about a brush with death with candor, a crooked grin, and a punchline are in the rear-view.

This is made abundantly clear by the blistering riffs and absolutely chaotic energy of album highlight, “leaf pile.” The track is an unrelenting bout of catharsis that comes to a head as Brian sings “I wanna feel that same sense of calm. I wanna feel that same sense of peace. It felt so real before you got here. It will be restored after you leave” and again with a powerful refrain of “Do I seem anxious to you? Do I seem backed into a corner? As if I had to make a move, but you could tell I didn’t wanna.” It’s this raw and unabashed energy that Brian says makes this one of the songs that he can’t wait to play for fans at their upcoming drive-in shows in New Jersey and Philadelphia later this month. 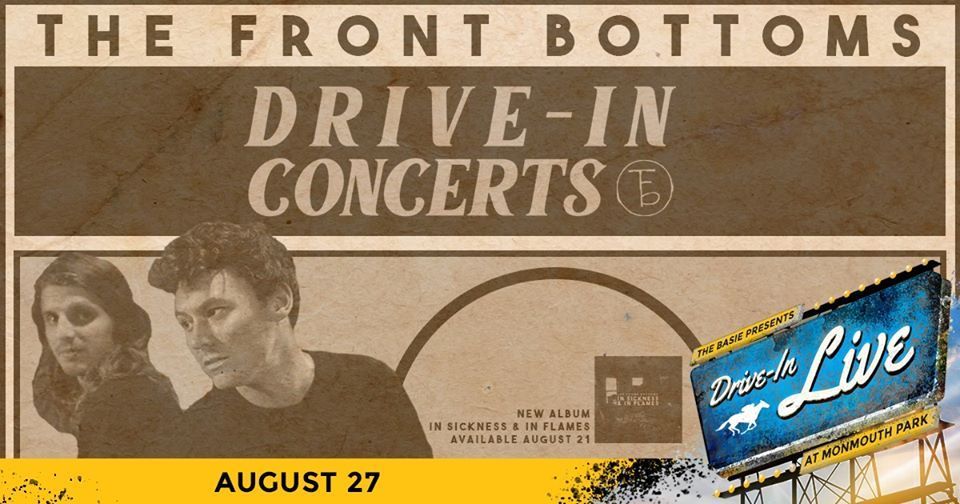 This isn’t to say that the band is done with songs that will make you want to dance; another track that Brian mentions being excited to share is “jerk,” a catchy, upbeat number that is bound to become a staple in the band’s live sets. The hook of the song is lyrically simple but is dressed up by a melody that is so sugary sweet that you can’t help but smile when you know it’s coming. You can feel the energy of a packed room from the second Brian sings “But I know what you mean, so I stare at the ground, that the world is so fucked, I wanna go back in the house. Where I buy and I use, I’m not sure if it works, by the time it’s revealed, I will look like a jerk. The bouncy chorus of “Like a jerk. Yeah, I know that I look like a jerk,” regardless of how often you hear it, never loses its charm. The dichotomy of these two tracks is just a glimpse into the highs and lows that listeners experience over the course of In Sickness & In Flames, which is something that Brian says he’s excited to share with listeners this time around. He says, “This art thing is a real process, ya know? This particular process is one that I’m very proud of and I think…it’s kind of like you were saying, this is more of a whole story. You get the happiest of me and the most frustrated side of me. You get the whole thing.”

The Front Bottoms occupy a unique space in music. They’re playing a folk punk-inspired brand of pop-punk that normally relegates bands to small stages and niche audiences, but they’ve been massively successful. Before the pandemic eliminated the possibility of live music, the Front Bottoms were scheduled to tour with Jimmy Eat World. This album shows why: it is the Front Bottoms on top of their game. Sonically, In Sickness & In Flames takes a little bit from everything they’ve ever tried. There’s the poppier side of songwriting that we heard on Going Grey, the riffier rock ‘n roll vibes of Ann and Back On Top, the anguish of their self-titled, and the passion that fueled Talon Of The Hawk. The cherry on top is the fact that, lyrically, this record is hands down their most self-referential in a way that feels self-aware without being self-aggrandizing.

We got our first taste of the album all the way back in 2015: when the band released “Summer Shandy” as a single off of Back On Top, it was done alongside a fifteen minute extended video featuring an early clip of the song “Fairbanks, Alaska.” They also lifted the lyric “It was all to see who could ride a motorcycle the fastest” from the “Sexy and Alive (Give An Inch)” demo from the Back On Top sessions for “leaf pile.” When I mentioned this, Brian lit up and said, “I appreciate that you were able to pick up on those Easter eggs, man, because we work really hard at that—and you know, it’s like, we do that with the Twitch streams too. We work really hard to keep it creative and give people a release from their shitty lives, which is so important.”

At one point, the band’s Twitch streams alternated between a live show and releasing small blocks of a Mark Jaworski short film called Nostalgic For A Time and Place I’ve Never Been that documented a trip to the Poconos that marked the beginning of the writing process for this record. When asked about this trip, Brian said that it’s actually a space that their buddy and long time collaborator Eric has recorded in before. Both Brian and Mat mention that they wrote five or six songs and a couple interludes on that trip, but none of that made it to the record. It was about the experience—they strive to keep it fresh, keep it weird, and most importantly, keep it creative.

The album was recorded with Mike Sapone, whose resume includes Taking Back Sunday’s Tell All Your Friends and Where You Want To Be, Sainthood Reps’ Headswell, and Oso Oso’s Basking In The Glow. Brian says that Sapone works alongside artists to help them put their best foot forward: “He’s really, truly a creative force. He’s just constantly sending you creative things and he’s all about culture and information. He’s just such a positive force. Ya know, when you’re in the studio, you can get frustrated as an artist. You’re trying to take something from your brain and put it into the world and to have an energy like that is so important. You get to work with all different types of producers, but in particular he showed us as a band and as individuals just such an amount of respect that I was not used to getting and it was just a really great experience working with Mike.”

While In Sickness & In Flames was written prior to the pandemic, so much of it feels so tethered to our present collective experience, from the introspection and reflective growth that is showcased in the songwriting, to the sweeping highs and lows of the music itself. This album is the perfect companion piece to the anxiety of standing in the face of uncertainty.

Brian sums up the band’s mission and the reason they have maintained such a loyal fanbase: “We have dedicated our whole lives to The Front Bottoms, me and Mat. It’s everything we have: it’s our life’s work. I think that the listener can hear the genuineness to it, so it just kind of works.” 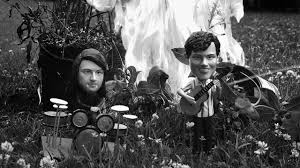