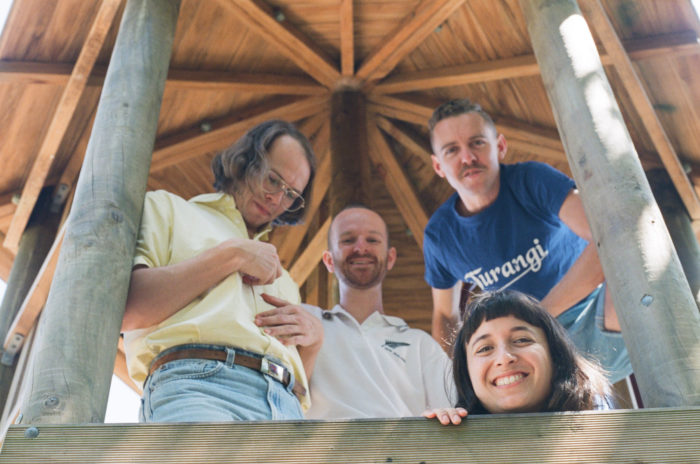 On their debut, Future Me Hates Me, The Beths were introduced to the world already fully formed—bursting right out of the gate with songs like “You Wouldn’t Like Me” and “Happy Unhappy” it’s no surprise that in certain circles the album was deemed an instant classic upon arrival. Their new record, Jump Rope Gazers, picks up right where Future Me Hates Me left off, combing razor-sharp power pop hooks with jittery lyrics about isolation and feeling uneasy, the end result being as catchy and relatable as an album can be in 2020. What the band couldn’t have accounted for was how accidentally prescient their newest batch of songs would become, frontwoman Elizabeth Stokes was writing about the difficulties of being apart from the ones you love before COVID-19 changed our lives and the band began promoting the album as soon as it became mandatory for us to distance ourselves from one another.

I spoke with Elizabeth Stokes about studying jazz in college, the ups and downs of touring nonstop, releasing new music in the midst of a global pandemic, and The Beths excellent sophomore album.

Get Alternative: Growing up, what kind of music made you want to start writing songs and playing in bands?

Elizabeth Stokes: When I first started playing music it was with my best friend in high school, we would play at the local shopping mall and part of that process was just learning a bunch of songs on guitar, I had already taken guitar lessons but I think that’s when I actually learned guitar properly because it was driven by a need to learn these songs. The songs that I was learning were by Death Cab For Cutie, Rilo Kiley, Tegan & Sara—I guess the indie songwriters of that time. Prior to that I was listening to a lot of pop punk and emo, I did start off really early on learning guitar tabs for Fall Out Boy songs and things like that and that’s when I first started writing music. And then I kind of stopped for a long time once I started studying at university, I was studying jazz and I got quite into studying music academically which I really enjoyed, I kind of went all in on the music that I was learning about and learning how to play and it wasn’t until after that I realized how much I missed that kind of music that I grew up on and always wanted to try and make it, but I wanted to make my ideal version of it.

I know that everybody in the band studied jazz in college, when did you first start getting into jazz?

If you want to study music in New Zealand it’s either that, the jazz course, or there’s a classical music course and a pop music course but that didn’t feel right either. It’s weird, I studied jazz a lot and I really enjoy it but like, for me I was more interested in the academic study of it I suppose. It’s beautiful music to learn about and there’s a lot of history behind it and a lot of listening to do—it’s strange to study it from New Zealand though which feels a little bit disconnected from where it comes from.

When did you first start working on songs for the new record?

Some of the songs are quite old, some of them predate the first record actually. But most of the writing I did for this record was written whenever we were home from touring off of Future Me Hates Me, so we might be home for three weeks or a month and I would be like “This is the time, this is when I have to write everything” because I can’t really write on tour.

I feel like you’ve been on the road nonstop since Future Me Hates Me dropped, what’s the hardest part of touring for you?

I mean, the best part of touring is every night when you play the show. I think the worst part is you get so tired, we pack up all our instruments and we do our own merch and everything, then you drive to a budget motel or something, crash at like 2 in the morning and wake up and drive all day to the next place. You’re exhausted and you get this energy from the next show that sort of replenishes you for the next day, so it’s really rough if you have a bad show or something like that. It sounds really banal but you get really tired from travelling all the time.

A lot of people are throwing around the word “prescient” to describe albums that have come out recently but you did write an album all about loneliness and announced it right when everybody started to quarantine themselves. Is it strange trying to promote the new album in the midst of everything going on in the world?

It’s strange, like you said the album doesn’t feel inappropriate for the pandemic situation going on in terms of those themes of separation and distance between people. The biggest change for us is obviously not touring and not really having any real time feedback on the new songs and things like that. But it hasn’t been too bad really, we’re making plans for the future and by now everybody’s kind of come to terms with the fact that there won’t be any touring for a while. The thing that’s been more on our minds lately is the Black Lives Matter movement, which is rightfully taking up everyone’s consciousness, and that feels like a good and productive thing to be happening. It doesn’t feel good to be taking up space self promoting anything at the moment when we’re all trying to deal with more important things going on.

Jump Rope Gazers is more sonically adventurous than your debut, did you make an effort to try and branch out from the stuff you were writing before?

Yeah, a little bit. We made our room bigger, Jonathan’s studio space that he rents, we ended up knocking all the walls down and turned it into one big room so we all got to record the base tracks at the same time. We obviously did overdubs and things like that, but being able to have this smooth transition from learning a song to arranging it to getting it really good and then you start doing takes, it was all very fluid being in that space. So that was very different from last time, where everything was a lot more piecemeal, because we were all working full time and we’d come in for a weekend and track a couple tracks. The main things we wanted to keep the same, like what we consider the core working process for us, but we had a bit more fun with the production but I think it still sounds like us, and because of that we were comfortable and confident that we could stretch out a little bit more with some new tempos and a few new sounds.

In my opinion you’re one of the best live bands in indie rock right now, how do you approach your songs differently on stage versus how they sound on record?

The thing about playing live is that we do this thing, and I think it’s something that a lot of people do, but we’re writing stuff that’s right on the cusp of what we’re actually able to play. When we started this band none of us were singers, I had done backup vocals before but never sang lead, so that was something new for all of us. I didn’t study guitar in school, I studied trumpet, so guitar was an instrument that I liked but I was never very good at it, and it’s the same with everybody else in the band with the instruments that they play. We’re always doing things where—for me it’s like writing guitar parts that are hard for me to play and then I have to sing at the same time and do things like step on particular pedals at particular points which is always really challenging and that kind of hasn’t stopped for us. So playing live is never easy, but I think it’s hard for it to get boring for us because we’re constantly challenging ourselves.

What are some of your favorite music discoveries of 2020?

The song that I’ve liked the most this year, I think it might have come out late last year but I only started listening to it this year, is a song called “Ambrosia” by Rosie Tucker. They’re a great songwriter, I think that song in particular I played over and over again because there’s something really magical in it, it makes me really sad. The other artist I’ve been listening to a bit more recently is a couple of rappers from Auckland who are really young and write really fun and really great rap music and they’re called Church & AP.

Jump Rope Gazers is out now via Carpark Records