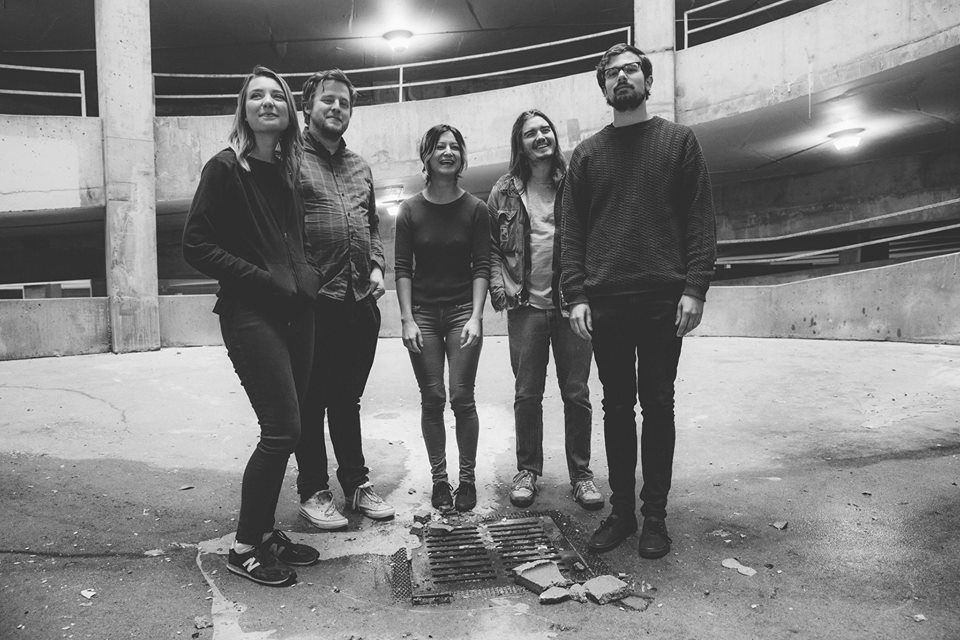 Team Tremolo began innocently enough: with Will Erickson, primary songwriter, guitarist, and drummer, creating music to scratch a creative itch. “I started writing the demos in 2013. I hadn’t played guitar for a while and I was really inspired to start playing guitar again… I just got to a point where it was like, I really like shoegaze, I’ve been listening to that a ton for the past couple of years, it’s been like my mainstay so I should try writing some stuff.” And, for a while, it seemed that a personal recording project was what Team Tremolo was set to be. “I was just taking it super slow and doing Garage Band demos,” says Erickson. But by 2015 “I kind of just hit a stopping point writing by myself where I needed to bring some other people in and actually get these songs to where I want them to be.” That, coupled with an interest in bringing the music into a live setting, led to the formation as a full band.

At this point, Erickson had a couple of the songs on Intruder completely written and skeletons of the others. These demos were sent to the other members before they ever got together, allowing them to get a feel for the project and which parts could be expanded on. “From the beginning I was like ‘I want this to be big: big riffs and slow songs and really drawn out stuff,’” so the other members always had the shoegaze vibe in mind. Vocalist Jenny Wood came in through this process, creating vocal melodies for the lyrics Erickson already had, while collaborating and writing new ones as well. “A lot of Will’s lyrics just kind of sounded ethereal. But also pretty, not morbid, just kind of not human. I really loved that and could relate to that,” says Wood. Erickson addresses this, affirming that he’s “always enjoyed really cryptic stuff and spooky stuff so, you know, I’m just comfortable with those dark vibes.”

Going into the studio was a natural progression, both for the project as a whole and the band members themselves. Because Team Tremolo started as an album-minded project, Erickson had a strong vision of what he wanted their recordings to sound like—and he had all the tools to obtain that. “This our first record with Team Tremolo, but we’ve all been in bands for a long time and recorded a bunch of albums. And for me, personally, it’s like every time I get into the studio I learn something new. I waited to do the Team Tremolo album until I felt like I was ready. I wanted to go in and feel really prepared.”

The band was familiar with both the studio (Air House in Wichita, KS) and producer/engineer Micajah Ryan, which made the process even smoother. Woods was especially appreciative of the freedom she had to do anything she wanted with her vocals. She says she was able to start and stop when she wanted, and express her own ideas without fear of judgment, both of which really pushed productivity. “When there’s full trust, at least for myself, there’s no limit on creativity. I can do everything that I want to do and go as far as I want to go. So the recording process was really a dream.”

As for the vocal style throughout the record, Woods found it easy to hone in. While playing in her first long-term band, she said, “I would get told a lot that I had a music theater voice, and it wasn’t fitting with that genre of the band at the time, which was more like A Perfect Circle. So it was really hard for me to figure out how to tone my voice down to sing the music that I really loved because they hate music theater. So I was really pissed off that that was the voice I was given.” The music she plays has become more poppy in the years and projects since, so she has been able to put that voice to good use. Still, she is glad to be back on the mic with another heavier, more emotional band. “It’s like learning a new language and you’re able to go back to your native language years later, and you pick it up so easily. It feels so good and so comfortable that you really dive into it. That’s how I feel singing with this; it’s very native and innate to me. So I am able to really go all the way with it.”

This innate passion comes into play during live performances, too. “I think shoegaze is kind of born in the studio,” says Erickson. “A lot of those bands, when they play live it doesn’t sound exactly like their record. But they make up for it with like sheer volume.” Woods elaborates on her bandmate’s comments saying, “It’s such a physical music. I was always mad that I could never get into yoga, but I think whenever we’re playing I’m able to be physical in the same way. I’m able to really get all the emotion of the sound in the guitar and the drums happening and that kind of just gathers in my body in a muscular way.”

Of course the vocal effects and harmonies won’t be present in the same way that they are on record, and even the instrumental performances aren’t completely replicated, “but I will do everything in my physical power to at least convey the energy of the melody.” In the end, says Erickson, “they’re kind of two different beasts for me… To me it’s more important just to have a good show and enjoy ourselves. It’s not gonna sound like the record, but hopefully it’s a different experience.”

And that experience, whether live or on record, is what Team Tremolo is all about. “The only thing that I want is to make sure people feel a lot,” Woods says. For Erickso,n shoegaze is all about thick atmospheric music that takes you to another place. “It can really just help to put yourself in another place and let yourself be immersed in it.” He compares it to The X-Files, or horror movies that just have a way of sucking you into their world. “I’ve always liked just being able to go, transport to a different place and get a break from stuff,” and he hopes Team Tremolo can do that for others. Woods reflects this idea, adding, “the most important thing for me is afterword, after we’re done, talking to people and having them say things like they were able to take a break from their head or take a break from their lives and really just dive into the sound. That look of relief that people can have then they were able to really feel something so emotive that they felt alive. That’s my end goal.”