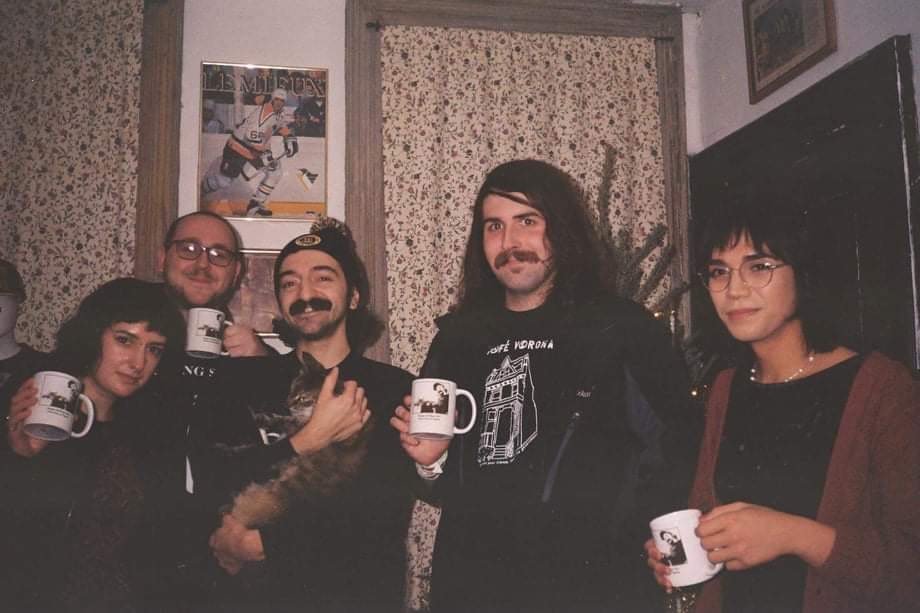 Short Fictions releasing Fates Worse Than Death (a brilliant emo record largely about decaying cities and institutions, climate catastrophe, and countless other ill effects of global capitalism) in December 2019, right on the cusp of the current global catastrophe, seems like an almost too darkly poetic set of circumstances. With its apocalyptic themes and high-reaching instrumental runs, it felt like both a reflection on, and escape from, the times. On the track “Nothingness Lies Coiled at the Heart of Being (It’s Such a Good Feeling),” vocalist Sam Treber even sings “I’m always here alone inside my bedroom,” a lyric that fans surely absorbed in a different light over the months following the album’s release.

When things opened up and concerts came back in the fall of 2021, the first show I went to was Short Fictions playing to a packed house at Mr. Roboto Project in Pittsburgh (with great opening sets from Gaadge and Sleeping Witch & Saturn). The group kicked out of isolation with a blast of energy, playing their songs so fast that you’d almost think it would fall apart at any moment if the band didn’t also sound incredibly tight. It was a great show, reminding me of exactly what I’d been missing during the months without live music. On the run of shows they were able to play last fall, Treber said “It was so sick. Even though shows are…different now (less intimate I guess?), it was still completely satisfying to play to people again.  Our tour down to Fest was awesome.”

With this tour starting around a year and a half after the record came out, more people had time to find the record, and Treber said “we definitely noticed higher turn out this time around than when we were touring right after our last album [FWTD] came out. You think that when a record drops the immediate response is all that you get but that’s not really true.  The internet’s a crazy little place.  So many bands blow up long after they’ve already broken up.  I was absolutely shocked when we played in Florida and I could hear so many people singing along.”

When asked about the new track, Treber said “a handful of concepts from this album come from this liminal feeling I was getting in the wake of our last album getting us some real recognition for basically the first time ever, but still being far, far away from having music being a fiscally sustainable life path.  This song is 100% satire, because being a musician is the most fulfilling thing in my life, and I love my bandmates like they’re my family.  I wouldn’t trade any of our experiences for the world.”

“That being said, to really make an honest go at the whole band thing in the way that I truly feel it deserves, and that might, maybe, possibly show significant yields really necessitates that I throw basically all my disposable time and money at it.  Which—don’t get me wrong—I’m happy to do.  But sometimes I think like, what if I still had all the money that I spent on instruments, van repairs, and studio time?  What if my work schedule wasn’t constantly interrupted by tours, and I didn’t have to limit myself to weird gig jobs?  I could probably be a well-adjusted, normal young adult.”

“Sometimes you feel like a rock star, and other times you play a show to ten disinterested people and you wonder if it’s all worth it. Really though we should just have universal basic income, free health care, and none-exploitative housing options and people could create art without the crippling burden of capitalism.”

“I’m not sure I would say I did this intentionally, maybe it was subconsciously, but you can kinda feel a sort of cognitive dissonance in the song:  the back-and-forth lyrics in the verse kinda have a devil-on-your-shoulder energy, and although the song is energetic, it still has a certain apprehensive flavor to it.”

After reaching out to a handful of labels that didn’t seem to work out for the band, Treber says Lauren Records fit because “Aaron who runs Lauren Records has been nothing but enthusiastic, professional, and helpful from the very first time we met.  I really felt like he wants us to succeed and has a plan to get us there. Plus we have a handful of friends on Lauren who had nothing but nice things to say. We love the band Closer and I figured if it was good enough for them it’d be good enough for us.  We’re also friends with Same (also from Pittsburgh, also Lauren).  We just did a tour with Perspective, a Lovely Hand to Hold: they’ve got a record on Lauren too. Not people we know personally, but Algernon Cadwallader and Joyce Manor have a few Lauren releases, so being even tangentially related to those two bands is pretty cool.”

Lauren Records will be the fourth label the group has released music through and Treber added “also I should say that we still love all the labels we’ve worked with in the past, Eric and Marty at Acrobat Unstable are some of our best friends.  I think they’re gonna continue to handle our last album.  Crafted Sounds out of Pittsburgh is a sweet label we worked with early in our career and still have so much adoration for.  We did one seven-inch record on Middle-Man Records, and that was truly an honor too.”

In addition to the new track and label, Short Fictions are hitting the road, with Treber telling me “we’re doing a week in the Midwest and we have a few dates with Your Arms are My Cocoon!  I’m really excited for that.  I first heard them on the four-way split they put out last year and it really blew me away.  I checked out the rest of the discography and quickly fell in love.  When Alex (our bassist and also manager) asked who we wanted to tour with that was literally my first suggestion and they (YAaMC) said they were down.  It’s very satisfying to get your first pick.”

After this run of dates, Treber tells me the band plans to tour as much as possible and that “it’s gonna be a landmark year for Short Fictions in many ways.  I want to take every single opportunity we can get.  If we can do half as much as we want to without global catastrophe interfering, I think we’ll do swimmingly.”

Let’s hope so. With times like these, we could all use some more music from Short Fictions.