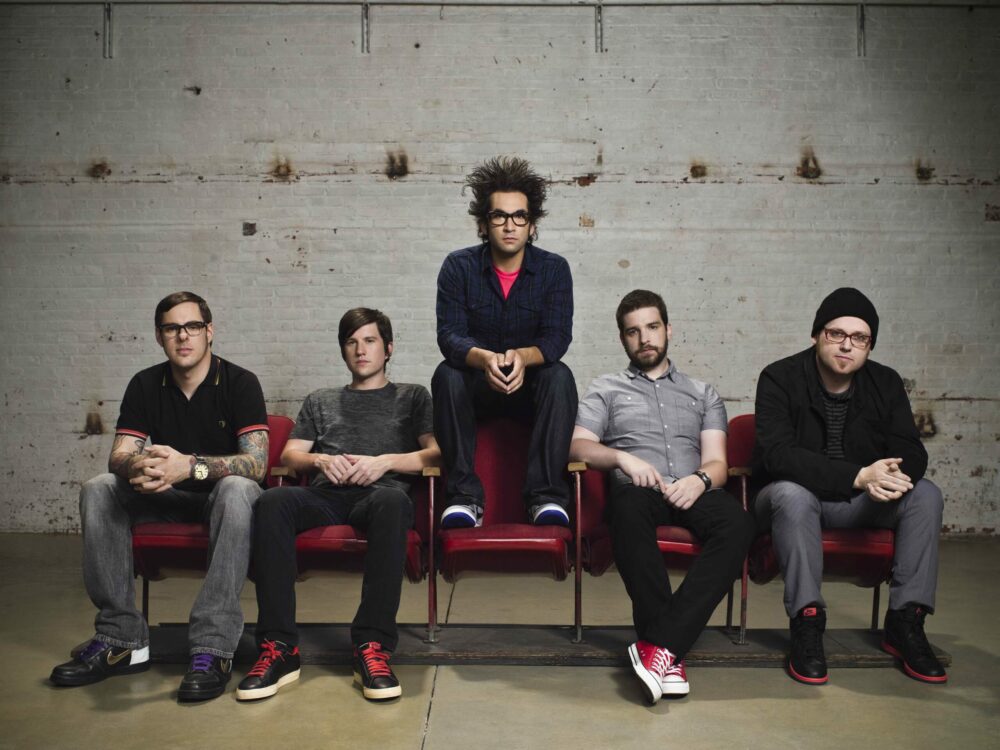 It has been 23 years since Justin Pierre and Joshua Cain founded Motion City Soundtrack, and while that may make those who have been around since the beginning feel absolutely ancient, it also underscores just how long these two have shared a wavelength between their creative, often anxious, deeply thoughtful brains. It took years for songwriter and vocalist Pierre and guitarist Cain to put together a Motion City Soundtrack lineup that would stick and for the band to emerge from its humble origins in Minneapolis. But you know what comes next: nonstop international tours, Warped Tours galore, 2007’s Even If It Kills Me peaking at No. 16 on the Billboard 200, and 2010’s My Dinosaur Life one-upping it No. 15 three years later. Over the course of these records, they wrote some of the best hooks in alternative music, made a new place for synths in rock history, and played a foundational role in forming the taste of many music fans (including a large part of The Alt’s staff).

Shortly after these huge successes, however, came the more important things —marriages, children— that make up the heart of what life is all about, though they don’t always coexist harmoniously with releasing albums and touring around the world. Yet the band pushed on, releasing 6 albums in 12 years, until they reached their breaking point. In 2016, the MCS released a statement: “We have no idea what the future holds, but for now we are done.”

It’s an understatement to say that Motion City fans are a passionate bunch. The band’s subreddit is filled with images of MCS-inspired tattoos: lyrics, dinosaurs, planets, bees. Needless to say, they didn’t take the news of the band’s breakup (or, to the more optimistic at the time, hiatus) well. And while Pierre and Cain, more than 20 years later, are still touched and astonished at the fervor their band inspires, they are also certain that the breakup was one of the best decisions they ever made.

“We had never stopped playing shows or doing things. It was always on to the next thing, how do we get on the next tour, when are we gonna make the new album, all through our career,” Cain says. “One of our managers was like, ‘You guys could think about putting a halt to things and see how life is.’ In my head, it was always maybe gonna be a temporary thing and we’d take the pulse later, but as it got close to the end show, it felt like this might be the last time.”

“The thought had never occurred to me that you could just stop doing something,” adds Pierre. “And so I remember our manager saying what if we just stopped? And this sense of relief just came over me instantaneously, and I was like oh my god, that’s brilliant.” No one knew if for sure Motion City Soundtrack was done, but that’s how the final So Long, Farewell Tour in Summer 2016 was presented nonetheless. It wasn’t that the band had “some grand scheme to go away and never come back,” Cain explains—or to go away and come back.

It wasn’t about the fans, and it certainly wasn’t about any animosity that had been sown between the 5 band members. It was, as Cain puts it, about “learning how to be a human again” outside the pressures and never ending carousel of recording, touring, recording, touring. The members scattered to different states; bassist Matt Taylor moved to Oregon and became “much more of a nature boy;” Pierre worked on a solo project, which Cain produced. “It opened us up to be able to try new things and do different things,” Pierre says. His own daughter is now five, as is keys player Jesse Johnson’s daughter; Cain’s daughter is now 10. “All five of us have various jobs and things we’re doing now that we wouldn’t have if we hadn’t taken that break, which is good for our mental and emotional well-being.”

Motion City Soundtrack fans respond so strongly to the band’s music largely because of Pierre’s raw, confessional songwriting, in which he often works out his feelings on everything from relationships to anxiety. “The sad truth of the matter is / I’ll never get over it / But I’m gonna try / To get better and overcome each moment / In my own way,” Pierre sings on “Even if It Kills Me.” The main focus of his life over the last four years was spending time “in therapy unraveling every aspect of my mind and being.” “I think I’m ready to start putting it together again,” he says.

So when the opportunity arose to do a reunion tour in January 2020, after nearly three years away, Pierre, Cain, and the rest of the band were feeling refreshed enough to be excited about it again. The tour ran from New Year’s Eve 2019 in Chicago to late January. They were also set to travel to the U.K. to play the Slam Dunk Festival in May, but then Covid-19 arrived.

In January, the band was the “most put-together emotionally” they’d been in years, Cain says. “We felt like a band, we felt like buddies, we felt like we were on the same page. Overall, the vibes were good on that tour in a way they hadn’t been as long as I could remember.” Prior to their, let’s call it, breather in 2016, the band had been go, go, go for so many years that Cain acknowledges there were times they were mentally checked out. After Even if It Kills Me came out, the band were arguably at their biggest; they were booking the biggest tours of their career and selling out shows. “But there was a sense of, ‘I feel the cracks in the ship, I feel it leaking,’” Cain says.

“When you have a band and things start happening like they did for us, and being on Warped and the momentum, it’s like a drug. It feels good. It feels good to feel like it’s happening, but somewhere in there it got real weird for a long time. The stuff we went through as a band, it was just a lot for us to go through and really never unpack or process. That’s the biggest realization as we got away from it. I feel like there were years there when I was onstage thinking about just going home, and I never told anyone that. Thinking, ‘I’m not enjoying the part that I’m supposed to enjoy anymore.’ I love the music and I love playing with them, and stepping away was very good because it gave me some perspective about what I like and don’t like about not doing this. I have to be careful on the road and not falling back into those traps that I set for myself.” Cain added.

“I got your back, brother,” Justin says.

The reunion tour was all the more meaningful because the band didn’t even have a moment to think about getting burnt out again; it was over almost as soon as it began, and Covid ensured that cycle of recording, touring, recording, touring won’t start up again anytime soon. “I’m very thankful we got to do what we did when we did,” Cain says. “If we hadn’t, I would be screwed as a human, if that had gotten canceled. I feel bad for every other band that’s gone through this.”

To hear it from Pierre and Cain, the band is “not in hiatus, per se,” at this point. They released three songs this year, though none of them could quite be defined as new MCS music: a cover of Fountains of Wayne’s “A Dip in the Ocean” for a tribute compilation in memory of Adam Schlesinger; a previously unreleased track, “Crooked Ways,” which had been recorded 10 years earlier for possible inclusion in the Twilight series and which Stephanie Meyer says is “THE Midnight Sun song”; and a cover of Ed Ackerson’s “Wired Weird” for a tribute album to honor his memory. But now that they all have their own separate things going on, it takes a lot of planning to get together to write music, let alone perform. And who knows when the latter will be possible again.

“I’ve said this before; Josh and Matt and I, we’ve sent ideas back and forth intermittently since 2006,” Pierre says. “There is music to be made; I feel that. There are songs that I’m like, Fuck, this could be amazing, I’ve got this ditty that’s perfect. For me, I’ve found I’m much more concept-driven; I can’t write something unless I’ve got this big ridiculous plan. We do have a lot of songs and I think we could put this thing together if we could all get on the same page. But with the pandemic….”

Around the time My Dinosaur Life came out, the band members were writing parts on their own and sending them to each other, and they quickly came to realize how different that is from all being in the same room to hammer things out. It’s why they’re hesitant to try and make new music remotely during this continued lockdown period. “That emotion that happens in the room in those moments is what MCS is,” Cain says. “We could probably make something really cool as a mail-in record, but I worry about it having the substance we need to have.”

It’s easy to see, being on the phone with Pierre and Cain, how much they genuinely adore one another. Pierre gets contemplative about the immense pressure he puts on himself to write music and deliver high-energy performances for MCS fans, and how that could sometimes lead to conflict in the room during writing sessions. “I’m pro-conflict in our band in terms of creative process, fighting for what we want,” Pierre says. “Even if in our own heads we think our ideas suck.”

“There were a lot of times you looked at me like you wanted to kill me,” Cain says, laughing. “But I love everything you do. That’s why I forced myself into your life for 20 years.” Toward the end of our conversation, something rare happened: Pierre and Cain begin interviewing each other. The level of introspection two longtime friends can draw out in one another is more than any stranger could hope to do over the phone, so I sat back and listened for a bit.

“If you could re-do it, would you put up with all the pain and turmoil?” Pierre asked Cain.

“I don’t know what my life would be like without it,” Cain says. “I got to do the thing I wanted to do with my life.”

“Playing that game is kind of silly because if I hadn’t gone through all the horseshit I went through to get to this place, I don’t think my life would be the same now,” Pierre says. “I like my wife and I like my kid, and I don’t know if those things would be in my life without it all.”