Summer hasn’t shown any signs of waning when I talk to Knuckle Puck’s Joe Taylor by phone in early September, which is good news for the band. Their third full-length album, 20/20, is dropping on September 18, but in a pre-pandemic world, it was slated for a June release. More than three months later, though, the weather is still very much appropriate for the sunny album from the pop-punk heavyweights.

With 20/20, Knuckle Puck “just wanted to do something fun and positive,” Taylor says. That decision was made well before the events of, uh, 2020 began to unfold; the five-piece—vocalist Joe Taylor, guitarist/vocalist Nick Casasanto, guitarist Kevin Maida, drummer John Siorek, and bassist Ryan Rumchaks—went into the studio to begin recording at the beginning of December, broke for the holidays, and wrapped in mid-January. But as 2020 has continued to wreak havoc upon everyone’s plans—and mental health—Knuckle Puck are doubling down on their initial instinct that this album’s vibe should be poppy, positive bangers. Though it’s their third LP since 2015, in many ways, it’s the first that has felt fully formed to them—for which the end result has actually matched their vision.

In 2015, Copacetic hooked fans with its blend of Midwestern emo and pop-punk; the dual vocalists and noodly guitars felt familiar, but the sound was urgent, youthful, refreshing. The album title is referenced in the line from “Ponder” and from closer “Untitled” that has been immortalized in countless tattoos: “I’ll tell you everything is copacetic.” Lines like “You tore me down” and “I’ve been much better but at least I’m healing,” colored their debut LP, but may have distorted the takeaway message.

“With Copacetic, the theme was supposed to be, ‘Things aren’t so bad, you’re alive, you’re breathing,’ but the message of that kind of got lost in the content of that record,” Taylor says. “That record came out to be a little more… in your feelings. And Shapeshifter was a little bit more frustrated; we didn’t even know what we really wanted to do with that record, we were trying to find ourselves.”

Their sophomore album features more distorted, driving guitar; more screaming and belting in Taylor’s vocals. (Taylor has since worked on his vocal technique, including taking instruction from Melissa Cross, of “Zen of Screaming” fame.) Like Copacetic, it is rooted in authenticity, frustration, feelings laid bare, but more polished in the songwriting. But as Taylor references, the making of the Shapeshifter itself went through myriad stages; the first iteration with producer Steve Evetts (The Wonder Years, Real Friends) was near-wholesale scrapped as the band found themselves frustrated with the process and unhappy with the product. Returning to Seth Henderson (State Champs, Real Friends), who also produced Copacetic and 20/20, yielded an album they could connect with, but they still struggled to define who they were as a band.

“With 20/20 we were like, we want to have fun, let’s just make a summer record you can feel good about listening to,” Taylor says. The lyrics are mostly uplifting: “Just don’t forget to breathe.” In contrast to past albums, Taylor’s vocals are mostly clean. “I’ve never been a singer,” he says. “Around 2016 I was losing my voice really badly all the time; no way was I using proper technique.” But even if 20/20 features less screaming, Taylor still needs the technique for when the band plays songs from Copacetic and Shapeshifter. “I’ve been able to tap more into proper screaming where I can scream and it doesn’t hurt me,” he says. “There were times where once a tour I would be spitting up blood; not a lot, but enough where it was worrying me for sure.” Taylor is happier with his vocals on 20/20 than on any other KP album. “I’ve been trying to navigate my own voice; I feel like I’ve gotten better on every recording.”

Outside of wanting a positive vibe, similarly to their other LPs, Knuckle Puck didn’t know at first what the theme of 20/20 would be. But as they kept writing, it revealed itself to them. “We had maybe half the music and like,10 percent of the vocals done; we were still very much writing,” Taylor says. “The first song, “20/20,” has a lyric, ‘I can finally see clearly as if my vision’s 20/20.’ That was just a line in a song that I had demoed out or whatever, and it wasn’t until Nick was like, ‘Dude, we should call the record 20/20’ that our message became so clear across all these songs.”

The concept of” 20/20” can conjure distinct meanings; it can mean that you’re seeing everything clearly, with perfect vision, but it can also mean that things only become clear in hindsight. Not only did the band gain clarity on what 20/20’s message should be by the time it was finished, but they had a better understanding of their entire discography, too. “When I relate 20/20 back to Copacetic, we achieved the message that we wanted to achieve with Copacetic but a lot clearer,” Taylor says. “I just hope eventually people don’t associate it with the year it came out,” he adds, laughing.

I ask if writing and recording in spring 2020 would have yielded a substantially different record, perhaps one colored by the events unfolding around us, which stumps Taylor for a moment. “When everything happened with COVID we almost doubled down on the idea of our record being this positive fun summer record, because that’s what the world—not just our music bubble—that’s what people need now more than ever is just some positivity,” Taylor says. “I hope we would have still wanted to write that kind of record; we’re all super glad that we did.”

As with their peers, Knuckle Puck’s year was flipped on its head by the pandemic. They were still in California on tour when the lockdowns began; their last show before everything went to shit was on March 12 at Echoplex in L.A. They had to cancel the last two weeks of their tour and drive back to Illinois, while Casasanto, who lives in Southern California, remained there to quarantine. Within the first couple months of quarantine, the band began seeing other artists doing livestream performances. But with travel still at a virtual standstill and Casasanto in California, they had an album release fast approaching and no real way to plan any virtual performances around it. “We didn’t have as much of an opportunity to get that going,” Taylor says. “We’d been talking to our manager, Zack [Zarrillo], about trying to do something when it came to releasing the album. It was a super weird conversation, because we didn’t really know when we could release it, so we just kind of decided to do singles throughout the summer.”

Between February and September, Knuckle Puck released five singles from 20/20: “Tune You Out,” “RSVP,” “Breathe,” “What Took You So Long?” and “Earthquake.” The singles taken together comprise an EP of sorts, and while some fans haven’t taken kindly to the steady stream of new music, Knuckle Puck stand behind their slow-burn strategy. “I’ve seen people being like, ‘Please no more singles,’ and it’s like, ‘Well, we’re kind of leaking the album for you as your summer goes on,’” Taylor says, laughing.

Pushing the album from June to September has paid dividends. Knuckle Puck will be able to do up their release as big as is possible these days with a livestream release show at Chicago’s Lincoln Hall. In conjunction with Audiotree’s STAGED live concert series, the full band—Casasanto arrives from California this week to practice at the band’s space at Superior Street Studios—will perform select songs from 20/20, as well as some old stuff. Taylor is tight-lipped about the exact setlist, but longtime fans should be satisfied. “We’ll be playing about half of 20/20, and we will play some fan favorites. I don’t think we’re going older than Copacetic.” The event will, somehow, be the band’s first time playing at hometown venue Lincoln Hall, which will perhaps make playing to an empty room, save for a handful of sound techs and social media managers milling about, feel less strange. “It’ll be a cool first experience there,” Taylor says. “We’ve been wanting to do an Audiotree session since 2014, and it’s just never panned out for one reason or another. We were just like, ‘There’s not gonna be a release show for this album.’ And then when Zack set up the Audiotree thing, we were like, ‘Hell yeah!’” In a way, Taylor adds, “this is even cooler. It’s not in a studio like a normal Audiotree session, it’s in a venue, and we can do a lot with the songs.”

Tickets to the album release stream on September 18 at 8 p.m. CT are available from Audiotree and run $16 for the STAGED pass and $23 for the STAGED pass and a digital album download. The performance is available until midnight on Monday, September 21. The support around the upcoming album has given Knuckle Puck a new perspective on what a give-and-take relationship with their fans really means.

“For a band like us specifically, it’s made us decently financially stable during this time, to where when all this stuff happened I didn’t have to go out and look for a job,” Taylor says. “When everything closed down it made me go, ‘What I am doing with my time?’ We want to keep creating content for the people who have supported us. A couple weeks ago I wrote a song, and then I wrote another one, and now I’m seven songs deep into making an album. Not only has people’s support before all of this stuff helped us do what we wanna do, but especially now we’re like, ‘Man, we owe them something.’ There’s a luxury in sitting on our asses for three or four months not doing anything, but we owe it to people to just keep creating, and we wanna do that.” 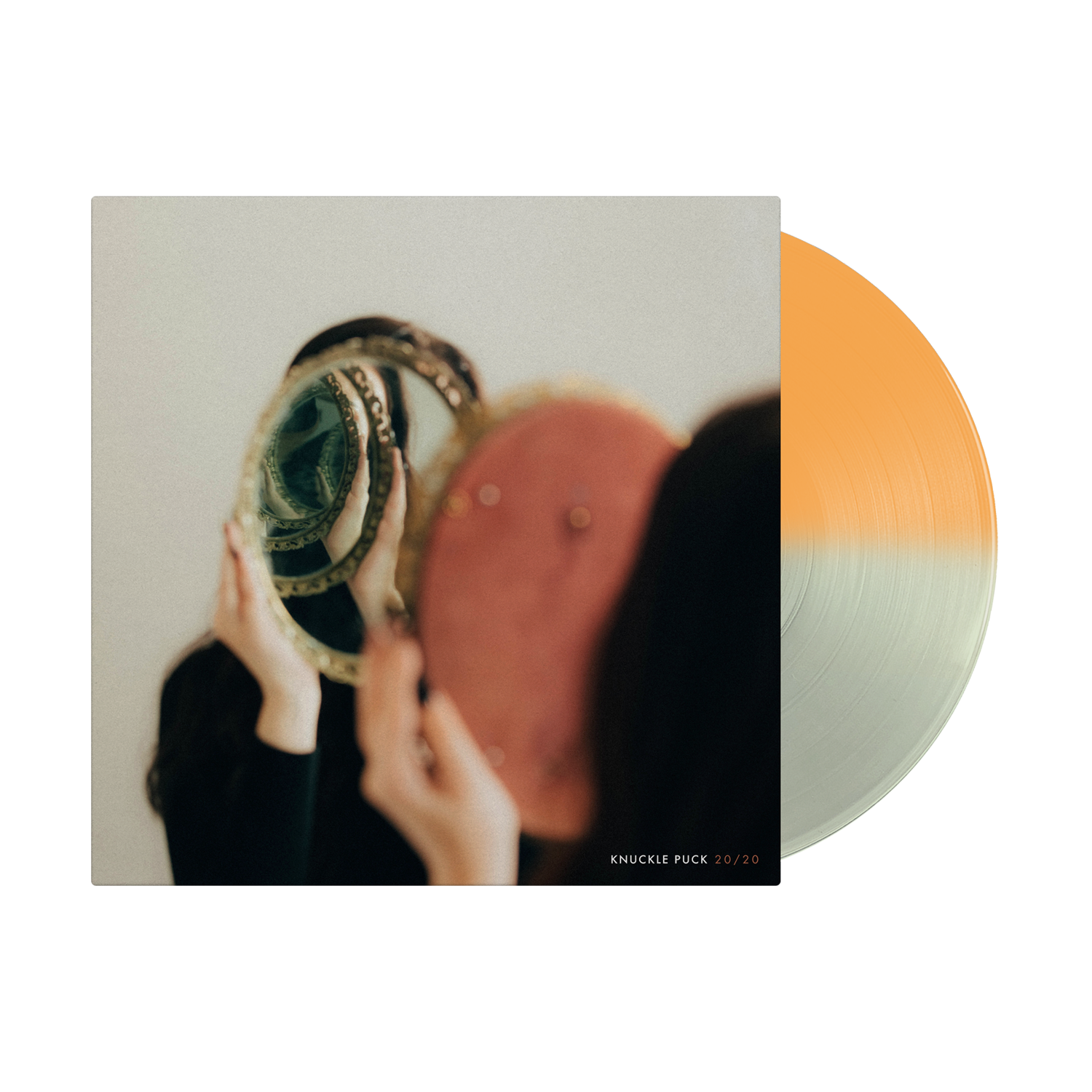