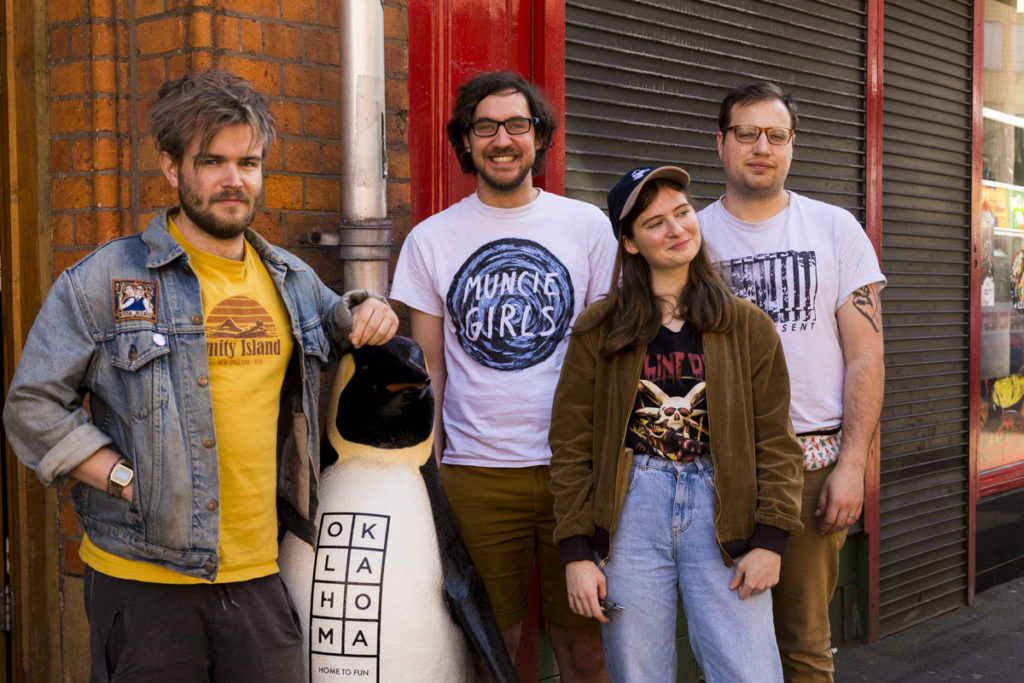 Fresh’s second album, Withdraw, is the band’s most confident release yet. Every song has detailed lyrics recounting a variety of emotions that are backed by the group’s sound which blends elements of pop punk and alternative rock.  We were able to talk to front person Kathryn Woods about the record, their upcoming tour, playing Fest and and more ahead of the record’s release which is out today, June 7, on Specialist Subject Records.

The Alternative: Can you talk about your writing style?

I always write about stuff that I’ve experienced. There’s a lot of bands that can put themselves in someone else’s shoes and do a concept song or a concept record but I’ve never really focused on that. It’s definitely something that happens to me or a phrase. I’ll write a lot in a notebook and review it and if something jumps out to me, I’ll run with that in a song. It’s definitely based on my experiences or things that happen to more or things I overhear or someone says to me. Then it kind of grows legs and becomes what it is.

Two songs that I really enjoy on the record are “Nothing” and “Revenge” and the way the narrative shifts from the negative into being valued. You’ve also talked in the past about how you write in a free form style, does that come naturally or is that something that you’ve been working on?

That’s the only way I can write songs. I would like to try and I wish to write more purposely, like “I’m going to sit down and write a song today”, a lot of people can and I really admire that but the only way I’ve ever written songs is through messing around on guitar and I’ve already got lyrics and then something fits. I wrote “Nothing” in two minutes and it just comes out and then it’s done. I can’t really work on a song for a long period of time, all the songs usually just come together in a couple of minutes. I think that’s why it’s free-form, I try not to question it. I record it on the iPhone memo app and then not judge what I say. The most important thing is that I record it and I say it and send it to myself. I think in “Revenge” the “I am valued, I am love” just came from a CBT worksheet or something I had written. Just pulling from stuff and not trying to analyze it too much because then it kind of gets ruined.

Is there a particular song that’s your favorite from the album?

I like them all but “New Girl” and “No Thanks” are probably the most different and the ones where we kind of thought to push ourselves. I think a typical Fresh song is quite rocky and one minute fifty but this time when we were recording, the band was consolidated and we work well together. We could afford to take more time on the songs and recording them. I got to spend four days recording vocals which was crazy because for the first album, I did all in one day. I can literally almost feel myself breathing more on the record.  I really like “No Thanks” and “New Girl” because we got to mess around with harmonies and overlay guitar parts. I like “Nervous Energy” as well because it’s a bit country and is really fun as well. I like them all. I think as they come out and we tour on them, favorites will emerge. My favorite song is always the one that’s the funnest to play so we’ll see how it goes.

When creating the album, was there a specific end goal in mind?

I think I just wanted to write something I was really happy with. As I’ve gotten older and more confident, I’m not writing to please people or match any expectations. I was definitely more insecure writing the first album. I just wanted to write a record that felt more honest and its just how I feel as a woman in music and i think that is apparent and if people understand that, i hope they understand that there’s no right way for a woman to write in punk and even in a really inclusive scene that we operate in, consciously or not consciously people have these expectations about how a woman should be vulnerable, angry or “you have to look like this or you have to act like this” and that’s not the case. And I’ve still got a long way to go like of course ,I second guess myself and care about what people think of me but the record is really honest and I am definitely proud of how i didn’t censor myself and i didn’t think “oh, how will this come across”. I want people to feel that honesty and I think they will.

Was there any thing or anyone that helped with that confidence or did it just grow over time?

It’s probably a little bit of just having some experience but I think touring the way we tour, we travel a lot and went to so many different places, and having our lineup and trusting them really helped. It’s impossible to travel so much with the same four people who you like and not become a bit more confident. I doubt myself less. I know that what we’re doing is appreciated and supported. I think as well, I feel quite happy with the band and that we’re doing everything for the right reasons and we love playing and that’s what matters. I still have a lot of self-doubt but I think I’m okay with that. We’re lucky in the UK, we have so many bands with women and non-binary people and I’m lucky we can play shows with them all and watch these bands that I really consider my favorites every night and draw that inspiration from that.

What should people expect from your upcoming shows?

Once the album’s out we’ll go kind of hard on the new songs. We’ve not been playing as much recently, not intentionally. I was living in France for a year and it was hard to play full band but now I’m back in London and we’re all in the same city. Being forced to take a break refreshed us a bit. We always bring a kind of dance party energy and i think that’ll go over really well, especially since we’re playing with Slingshot Dakota. We’re also playing with Nervus and Koji on a shorter tour in June. Hopefully, our show can give people a place to dance and feel safe.

Within London’s music scene, can you name share some bands that stand out to you?

Dream Nails, one of the coolest bands right now. They’re just so unapologetically angry about the fucked up politics in the UK but they make their live shows really joyful and you feel really accepted at all of their shows as a woman. I like petrol girls a lot. Bands we play with a lot – Woahnows, they have a great album out. I really like happy accidents who we’ve played a lot of shows with. 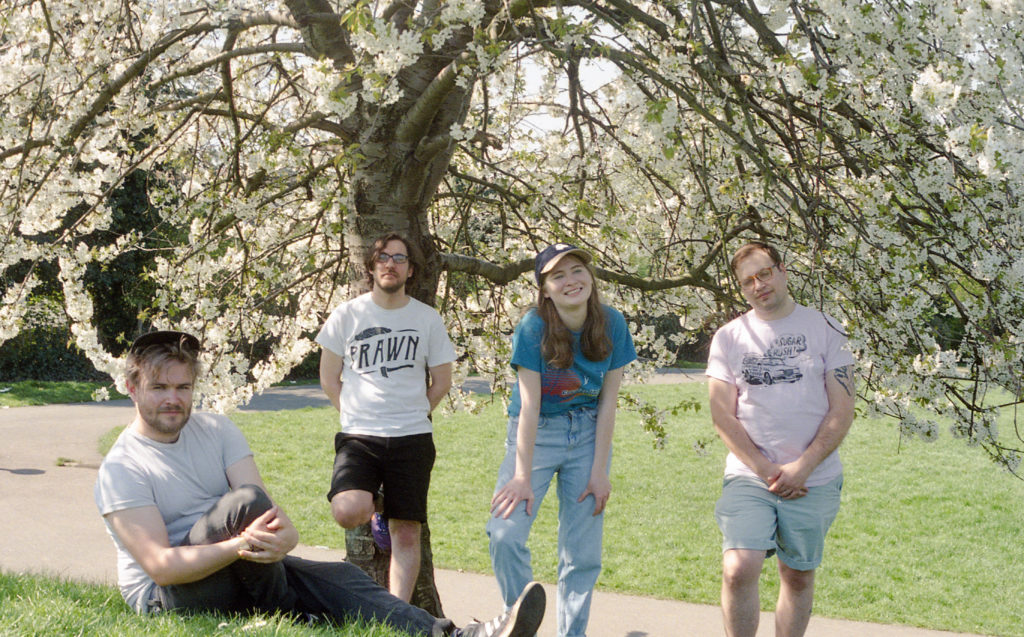 What would you say to people who want to get into their music scene and just music in general?

Try even though it’s really hard but be kind to your self and try not to be critical in any way. Playing an instrument is literally just the amount of practice you put in is the amount of skill you get back. Just have fun with it, like remember that it’s supposed to be fun. Try to find a community that makes you feel welcome. When we first started Fresh, we played a few shows that weren’t in the community that we’re in now and those kinds of shows, I remember always being was the only women there or the only woman playing. When we were a tiny, tiny band, we were just playing anywhere that would have us and in the city, London especially, people were apathetic because there’s millions of people playing every night. Compared to after we started with Special Subject and going away on little tours, the difference in the before and after that and how my comfortable I was, was striking. If you want to play a show but don’t like the look of the line-up or the bands, don’t play. Play the shows you want to play and when you’re looking for someone to play with, make it people you’d already be friends with anyway, they just happen to play an instrument. That’ll make it easier in the long run. And don’t undersell yourself or think that you’re lucky to be there. People are lucky that you’re playing, try to reverse it in your mind.

Later this year, you’ll be playing in the US for the first time at Fest.  How are you feeling about that? Who are you planning on seeing?

We really have no idea what to expect, I’m excited but quite nervous.  I’m really excited to see adult mom., future teens – there’s so many playing. Our friend Tom from Manchester is playing a solo set as his project tea leaf. That’s the thing about Fest, it’s so big and I think because the US is so big, it’s a bit overwhelming and as someone from the UK, our island is so tiny. Joyce Manor is playing and I really like their new album, i haven’t seen them in a while. Millions of bands but those are the three I can think of off the top of my head.

You can purchase the album here and view their upcoming tour dates below: