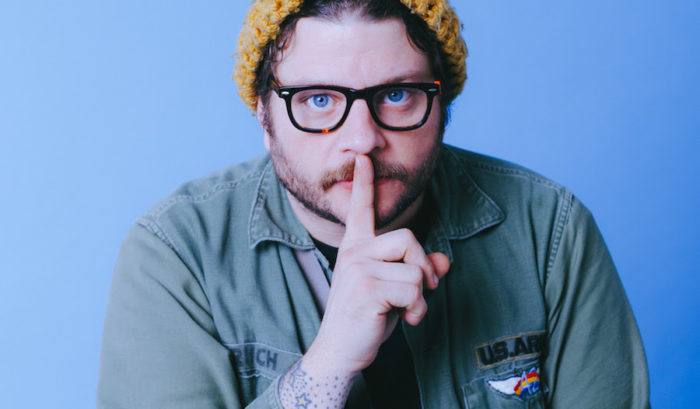 Derek Zanetti, who has performed alone as The Homeless Gospel Choir for about ten years, has extended the Choir beyond himself. With his newest release, This Land is Your Landfill, Zanetti has brought on other musicians to assist in the songwriting. The record is incredibly honest and modernly appropriate, yet still feels like a personal passion project.

I got the chance to talk to Derek about the writing and recording process, as well as the changes that developed with the full band transition. We also discussed the strength of the underground family that the HGC has spawned over its lifetime.

The new album is very contextual for the time period, addressing issues like American political corruption, the climate change crisis, and the receding punk scene. However, it feels very intimate in perspective. I asked him how he communicated the dissidence messages while finding catharsis through personal reflection on the new tracks.

“I think we feel alone in our worry. All we need to do is talk to each other and realize that there are other people who relate to us,” Derek said. “I don’t know if I’m necessarily reaching for a more palatable audience, because if you’re listening to HGC, you probably know exactly what you’re getting into. I’m just speaking about myself and my worries for the world; things like single-use plastics, air pollution, climate change.”

The advocacy involved with the creation of the album is commendable, and while it’s not hiding on these songs, the framing of narration stays contained in Zanetti’s thoughts on the subjects. He spoke about the music being a celebration befitting of how it felt inside his head.

“I had a difficult relationship with my dad, who passed away in 2018. A few days before he died, he had said he was proud of me,” he said. “Afterwards, I thought my feelings about our relationship would change, and I was disappointed to find they didn’t. I wanted this like, heartbreaking, epiphany moment of sadness. When it didn’t come, I knew I couldn’t force it to happen. Then, since I wasn’t mourning the same way as the other people around me, I felt paranoid. What helped me through that paranoia was loud, confusing, punk noise. When I tried to express my feelings, I just heard this big, boisterous, Pixies style music in my brain. If I was going to write out of my head, it had to sound like that.”

The record most definitely reflects that statement, and incorporates a lot of disorientation amidst its catchy melodies and punk anthem backing vocals. He made a request that I mention this is “a loud, punk rock band. Nothing folky about it!”

The personnel list for This Land is Your Landfill is extensive, and full of incredible songwriters and producers including Chris “#2” Barker (Anti-Flag), and Maura Weaver (Mixtapes). Zanetti spoke fondly of the collaboration efforts.

“This is the first time I’ve properly written with someone. Matt Miller (Endless Mike and The Beagle Club) and I would take trains to meet up and write this together, as a team,” he said. “It’s like, the only way to make it huge is by building it huge from the start. It has to feel as chaotic and loud as it felt in my head.”

As a fellow solo artist who transitioned to full band, I was curious how it affected his songwriting structure.

“I think my whole songwriting career up to this point, I just wanted my dad to hear it and come to a gig. I wanted to know that he heard me, but now it’s like, I don’t have to be brash to get someone to listen,” he said. “I’m not just saying ‘fuck’ because I’m trying to get someone’s attention. What can I say now?”

The personal insight of that question weighed on me for a while after our talk. When you’re free to express anything, it’s hard to think of anything at all. What’s worthy of being explored? Zanetti found through cooperation with other writers the motivation to keep doing it for the sake of one another.

The sense of community exhibited by this record is essential to reminding the rest of us that community has great strengths, especially during a time of crisis like this. I asked what he thought about the response of musicians, industry workers, and fans throughout the world to the current pandemic, and he couldn’t speak more highly.

“There’s been a lot of wonderful reactions to this and efforts to help artists & crews. Seeing people come together to support the finances of those struggling is powerful. I feel very fortunate that people have come out to help me among so many,” he said. “I’ve gotten cards in the mail with messages like, ‘We’ll miss you in Boston, here’s something for groceries and dog food!” People have sent me gluten-free cookies to our shipping warehouse. It’s very thoughtful, and it’s because my music is really about providing a family for the outsiders, and punks, and genderqueer people who need one. There’s this underground movement of people inspired to help each other during a global panic, and I helped in bringing them together.”

Hearing Zanetti talk about this network of support inspired by his project made me think bigger; like The Homeless Gospel Choir wasn’t just a stage name, but a real movement with an incredible name to match. He did have one last thought for us.

“Life is precious, so call that person you haven’t talked to in ages,” Derek said. “Don’t hold grudges. Do the right thing.”

This Land is Your Landfill is out 4/24 on A-F Records. You can pre-order it  here.