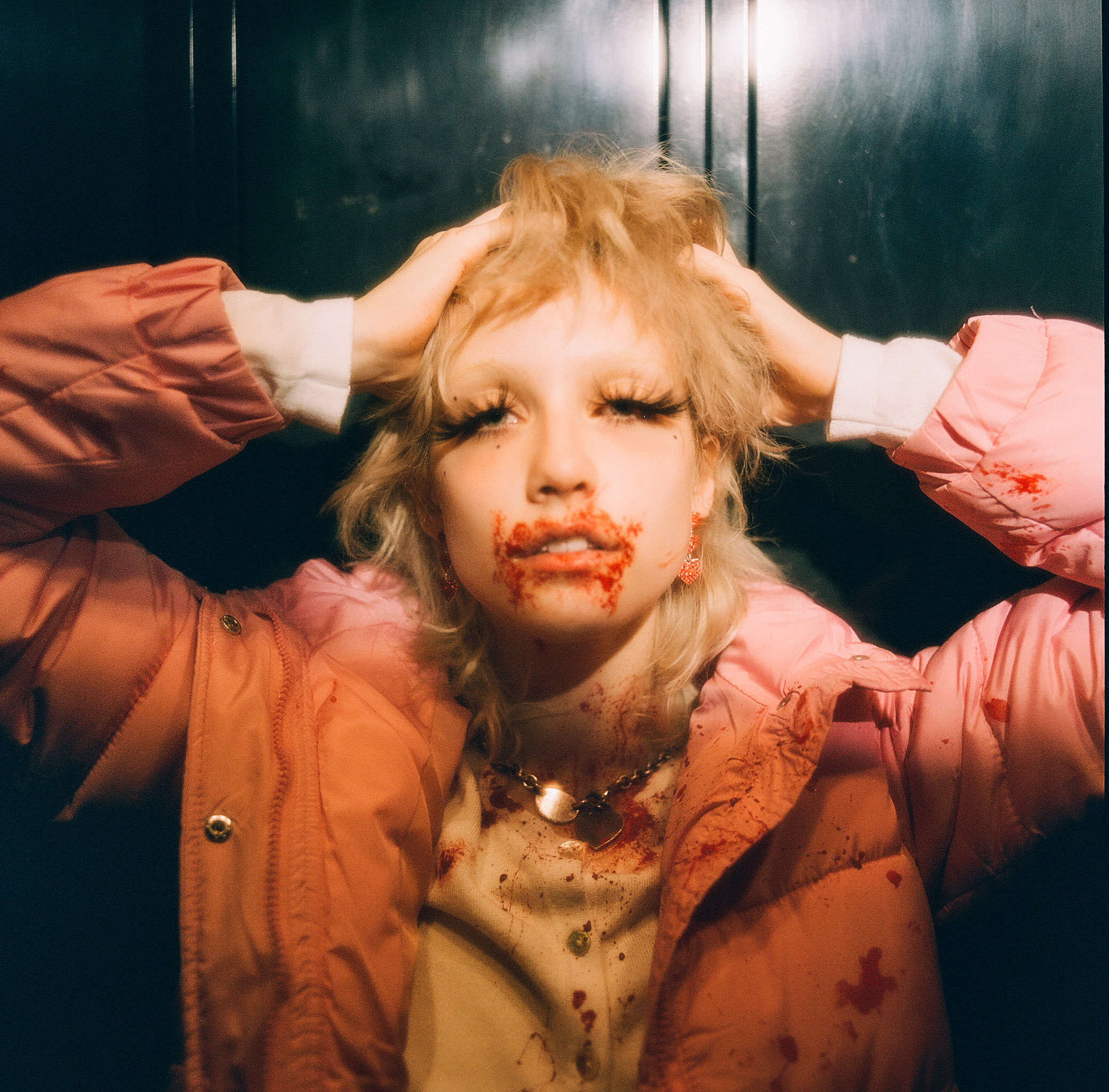 Blood Bunny is technically the sophomore album from singer/songwriter Chloe Moriondo, but you’d be hard pressed to not consider this her true debut as an artist. Her first album, Rabbit Hearted., was released in 2018 and feels almost entirely disconnected from the person that she is today. That album is primarily made up of delicate, ukulele-driven bedroom-pop songs that showcase a lot of raw talent from a very young artist – but it’s clear that she was still trying to find her footing. Fast forward to the present: Moriondo has been working on a collection of songs that are dynamic both in sound and in lyrical content; offering up some of her most tender and vulnerable moments alongside those that showcase her morbid sense of humor. It’s a stark departure from her previous work, but it’s one that listeners can tell that she feels at home in.

“Blood Bunny is absolutely here to kick the shit out of Rabbit Hearted,” she says over a mutual laugh as we discuss the growth between records. A lot of that progression can be attributed to the rollercoaster ride that the last three years have been for her. In that time, Chloe has graduated from high school, turned eighteen, and finally felt able to focus full-time on making her music sound and feel like exactly what she hears in her head. In order to do that, she worked with a handful of co-writers and producers that helped bring these songs to life, which was a new experience for her.

When asked about that process, she said that “It was definitely a strange experience, and there was a moment where I had to take a second to find my own groove and find what works best for me – but it definitely made the album very special.” Before that, she’d taken an entirely DIY approach to her music. She mixed, mastered, and produced all of Rabbit Hearted. on her own. Moriondo referred to that album as wimpy, but crucial to getting her to where she’s at now.

When asked about any correlation between the titles of the two records, she says that she wanted it to feel sort of like it had evolved from her previous work. She continues with, “…and there’s a lot of gore and some edgier stuff on this record, so I think it fits with that.” There’s a moment of pause before she laughs and says, “I also just really like bunnies and I really like blood.” Which, sure, might sound silly, but it does a fantastic job of echoing the dichotomy that she’s built for herself with this record. Blood Bunny bounces back and forth between huge, playful tracks “Rly Don’t Care” and “Girl On TV” and these incredibly macabre, but no less exuberant “I Eat Boys” and “Bodybag.”

The two former tracks are exactly the kind of full-throttle, drive with all the windows down, and scream at the top of your lungs-type songs that everybody needs to hear. “Rly Don’t Care” is a testament to Moriondo’s youth and newfound sense of independence; she sings about getting her driver’s license and feeling free from the weight of external validation. On the song’s incredibly infectious chorus, she sings “I really really don’t care if you don’t like my hair or don’t like my clothes or anyone else does / anyone else does / I promise I didn’t ask if my piercings are attractive to you / That’s weird and I’m eighteen so I really don’t care / I really don’t care, no!” It’s an explosive and summery middle-finger of a song that immediately prepares listeners for what the rest of Blood Bunny is going to be like. “Girl On TV,” which was released as a single at the end of 2020, was an effortless entry point for me into her music. It starts off just a little bit plucky, with Chloe giggling before throwing us into a larger-than-life pop song that touches on the idea of feeling like she’ll never be as happy as the girl on TV.

These songs, along with the “Favorite Band,” feel like love-letters to her major influences. When we talked about artists that inspired her songwriting she was quick to reference Avril Lavigne and Paramore – two artists that were huge mainstays in my iTunes Library growing up – but we also touched on the influence of contemporary artists like Snail Mail and Soccer Mommy. You can definitely hear a little bit of each of those artists here, but what we discussed next is what I think really puts the Chloe Moriondo stamp on these songs.

When discussing the gory nature of songs like the most recent single “I Eat Boys” or “Bodybag”, she mentions that she was heavily inspired by a lot her favorite horror movies. “I Eat Boys” was directly inspired by the cult classic Diablo Cody movie, Jennifer’s Body, but she also cites Midsommar as something that was pivotal in the way that she approaches the subject of gore. She describes the movie as a sort of lightbulb moment, saying that it was “weird and gorgeous and beautiful and freaky” but most importantly, it reminded her that there’s a lot of fun that can be had with scary stuff — something she’s managed to pull of beautifully over the course of this record.

She also managed to sneak two of the most beautiful love songs that I’ve ever heard onto the back half of the album. “Samantha” and “Strawberry Blonde” are two unabashedly queer songs that are dripping with the saccharine sentiment of young love. “Samantha” was written for her girlfriend and you can feel that genuine emotional connection to the song every single time the chorus hits and she sings “Samantha, I’m in love with you / I’ll do anything you ask me to / You’re the reason that i dyed my hair blue.” She shared that she didn’t let Samantha hear the song until just before our interview because she wanted to make sure that it was in its most ideal state before allowing her to hear it, which reinforces that these songs aren’t coming from some vague idea of love, but rather, from the belly of it. When I asked about the importance of these songs and choosing to fully embrace her queerness, Chloe said, “I think that being honest and sensitive and willing to be open with your audience is the most important thing in anything that I make. I want the songs to sound like something that would actually come out of my mouth, to feel conversational.”

That alone speaks to how important that this record will be to kids hearing it for the first time. I wish that when I was growing up, I had a frame of reference for my actual romantic feelings – and to hear Chloe wear her heart on her sleeve and just sing what she means in the exact way that it’s meant to be sung creates such an intense wave of joy. Those two closing songs are a magical way to round out the experience. When asked if there was anything in particular that she wanted people to take away from Blood Bunny, Chloe said, “I never know what to say. I think I just want people to rock out in their house and just dance, and sing, and do something emotional. I just want people to connect with it.”