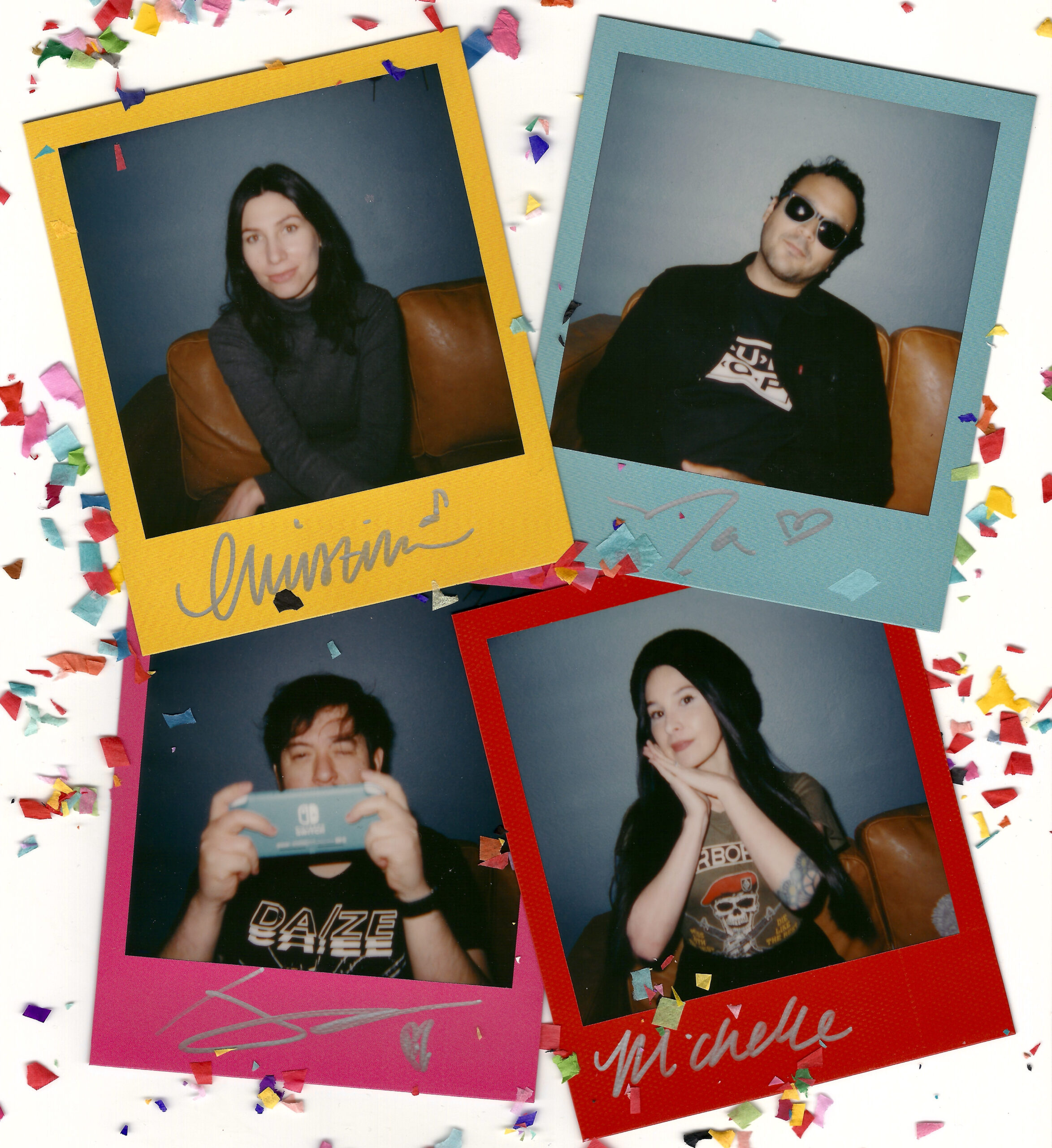 It’s 1994. The spring sun beats down on your scuffed up Doc Martens as you hop up on the hood of your Honda Accord. As you pick at your chipped nail polish, a friend with an arm full of gas station goods bounds over—tossing you a too sweet slushie and some Twizzlers. They join you, tossing a worn blanket over you both as you prop your elbows up. The evening haze begins to envelope the air as your eyes scan the city skyline. One of you make some offhand comment about corporate America while working through a brain freeze. The other curses as their lighter drops to the gravel below. The car windows are down, music drifting through the speakers- songs tumbling between light and dark. Life might not be perfect, but it doesn’t have to be to feel alive.

That 90s daze is how one feels as they flip on Blushing’s new record Possessions. Consisting of two husband and wife duos (Michelle and Jacob Soto, Christina and Noe Carmona), the band has made a name for themselves in the dream pop and shoegaze communities over the years. Possessions only amplifies that identity as the entire record is steeped in ethereal vocals, hazy (yet sometimes frantic) guitar hooks, and a thick, atmospheric soundscape. An album created during the pandemic, the group seamlessly blends the feverish environment of the past two years with darker and lighter hues—taking a fearful time and condensing it into something digestible. It’s the present feeling that comes from Possessions that lingers with the listener, giving way to heavier tracks followed by sunnier dispositions that could represent our tumbling minds since 2020. And, it’s in that resonating current where Blushing succeeds, causing this to be their best effort to date.

I got to chat with Blushing last month about Possessions. We discussed the differences of constructing an album during a pandemic and how that can affect its overall creation, teaming up with fellow shoegaze artists throughout the process, and more below:

You guys began recording Possessions at the end of 2019 right before the pandemic hit. How much did the direction of the album change throughout the past two years that wasn’t part of the initial process back in 2019?

Christina – Going into the studio, we actually had shells written for most of the songs, which always tend to evolve while we’re in the studio. We really thought that we were going to be in the studio for two or three months, tops. Our plan was to have the record released in 2020. When lockdown happened, our bubble was us four (it was very manageable being two married couples) and Elliott. It slowed down the process but I think bought us even more time to experiment than we ever could have anticipated.

When I listen to the record, there’s this sense of familiarity that comes over me as I can feel the highs and lows that have impacted us all since 2020. How was it creating a record as we lived (and continue to live) through such a troubling time? What were the main differences you found creating in this kind of environment?

Michelle  – Because the entire recording process was slowed way down it actually allowed us time to fine tune things that may have gotten rushed and as a result we ended up writing and recording I think 3 additional songs that made it on the record because we simply had the time. I wrote the song “Possessions” after Covid hit, after witnessing the panic and reaction to scarcity. But on the flip side of that I think we were also inspired to make some songs brighter, faster and poppier as a reaction to the bleakness outside the studio door.

Who were your main inspirations for the sound of Possessions?

Michelle  – When writing melodies and lyrics for this album I wanted to really lean into our pop abilities. I wanted to create melodies that were bouncy and full of words and not just rely on drawing out one or two words to make up an entire chorus. So I took a lot inspiration from Lush (surprise surprise) who fill up the vocal space with a lot of lyrics. I mean Ladykillers is a beast! I also kept listening to “Not Too Soon” by Throwing Muses and “Super-Connected” by Belly and just hoped I could write melodies half as good as those.

There’s a lot of 90’s influence weaved into the tracks. What is it about that era of music that you wanted to channel for Possessions?

Christina – Noe and I had been watching a ton of 90s party movies, including Clueless (my favorite), which is what really inspired it. I love that music because it’s fun, bright and playful and that’s how I wanted to feel with some of the new songs. Plus, 90s music is something the 4 of us all love, so it’s pretty natural for us to go there while we’re writing.

You guys teamed up with a handful of fellow shoegaze artists for the creation of this record. From working with Ringo Deathstarr’s Elliott on production to having it mastered by Mark from Ride and then featuring Miki from Lush on a track… What was it like working with all of them through the process?

Michelle – Elliott has been a longtime friend and musical partner, so working with him is always fun. His ability to goof around and make us laugh at the end of a long day of tracking is invaluable and he just makes great suggestions. He knows the sounds we want to achieve and more importantly he knows the sounds we should try to achieve even if we don’t know it yet. Miki was astonishingly funny and thoughtful. I remember when she was asking us our preferences on how we wanted the final vocals delivered (dry vs. with reverb) and I remember thinking “Miki is asking US how we would prefer HER vocals am I dreaming right now!?” I still pinch myself sometimes.

Like Miki, we were floored that Mark Gardener was down to work with us. He was very excited about the idea of mastering the record. After listening he wrote back how much he enjoyed the album while offering to mix “The Fires” as well to be a part of it. Mark knew what we were trying to convey with ideas and explained with clarity exactly what he envisioned. We were able to bounce ideas of each other and land on the perfect mix for “The Fires”, even though we were in different time zones.

What’s one thing you want people to take away from Possessions?

Michelle  – I hope people feel that they were taken on a journey. The tracks range from slow and reflective to a full on thrash assault and everything in between. We didn’t want any two songs to be too much alike or for the listener to get too comfortable.

Christina – This album takes on such a wide range of songs and feelings. I hope listeners will take away that it’s okay to experience such a wide range of emotions and you don’t have to put yourself in a box. An aggressive, heavy song followed up with something light and fun is kind of like the clouds opening up after a storm.

With groups like yourselves being a part of the shoegaze resurgence, what initially drew you to the sound and what do you think sets the genre apart?

Christina – I love listening to music that has texture. You can listen to it a hundred times and maybe the 101st time, you hear a new layer in the background, something you’d never noticed before. I also just really like hearing fuzz against pretty.

Michelle – I had been a fan of the genre since the nineties but it wasn’t until 2003 when I was given a burned mix CD by my boyfriend at the time and it had “There’s Still Life” by Chapterhouse on it. I fell in love with the warm swirliness of the music and the attention to melody. It really solidified my love of the sound and I just kept digging deeper into the music and never stopped. I think the genre is set apart by the fact that the music just feels good to listen to but doesn’t attempt to overcomplicate or achieve more than just a good feeling, and that good feeling can be anything you want it be, even sadness.