Home  >  Interview: Basement Discuss ‘Beside Myself’

Interview: Basement Discuss ‘Beside Myself’ 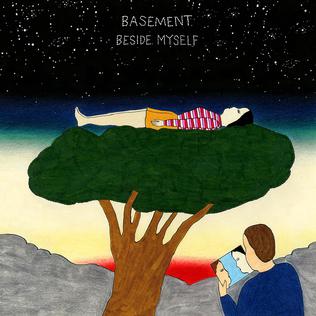 “Why can’t I just be here now?” is one of the many questions Basement’s lead singer, Andrew Fisher, asks on the band’s forth LP, Beside Myself. Released in October 2018, the straight forward, guitar driven release centers on a variety of personal struggles such as the ability to stay present in the current moment.

“Something I struggle with is being able to appreciate something while it’s happening as opposed to retrospectively or looking into the future and expecting things to be better than they are,” Fisher said. While it’s something he’s still actively working on, self-discipline such as using his phone less and being outdoors for stretches of time has been helping. “Yesterday – here’s an example, I was in the car and I realized I had been driving around New York City and hadn’t been looking outside properly so I looked out for five minutes and looked at the skyscrapers and thought “hey, I actually enjoy what I’m doing right now.”

When writing their record, the band stuck to their usual process, Fisher explains. “We’ve always kind of written stuff in bits and pieces here and there from different members. It more so tends to be me and Al [Henery],” he said. “Music comes first but once I sing some stuff out and get melodies, I try and write to it. If anything, we have more time now.”

During the process, the band wrote in the UK and did writing sessions in California as well as one in Boston. After entering the studio, their focus was to enjoy the whole process as they were working with people they previously hadn’t worked with before, producer Colin Brittan and sound engineer Alex Prieto. “We got on really well with the people we worked with,” Henery said. “It was a really fun month recording and tracking. [We had a] focus on making the songs sound as good as they possibly could. It’s a relief to work with people that are such a pleasure to be around.”

While their record is their first on Fueled By Ramen, Fisher explains that label as being like a family for the band.  “They’ve been super supportive from day one and letting us be who we want to be and facilitating anything that we need to achieve that. They’re awesome. We were all apprehensive, because obviously it’s a big transition. We were really happy at Run For Cover, everyone there is great, we still love them and Alex still works with them and we’re all really close with them,” he said. “We were scared of moving somewhere big because we didn’t know if it was going to be like this faceless organization but it’s not like that at all. It all feels very interconnected with the other labels under the Atlantic umbrella. Everyone talks to everyone and it feels like they’re in it for the right reasons and try to push bands as far as they can. It’s really cool to be a part of that.”

In support of the record, the band has been touring with a variety of artists. For Fisher, one of his favorite artists from a recent tour is Culture Abuse who they toured with through Europe in January. “I like them on record, I thought their sounds were really cool but then it kind of clicked live. It’s so different live but it made me enjoy the record version even more because it was this really interesting contrast of how hard they go live and how well rounded the songs are on record. I really, really like that.” For Henery, one of his favorite tours was with Pllush on the west coast. “I felt like we just got on so well so quickly and the whole vibe of the tour was so good,” he said. “I love touring with them, hopefully we can play more shows.

Currently, the band is on the road opening for Pixies and Weezer and will be headlining their own shows following that run. “They’ll be pretty different. One we’ll be playing in arenas and be kind of crazy playing for 20 to 30 minutes and more of an opportunity for us to play in front of a crowd that most likely’s never heard of us,” Fisher said. “It’s kind of exciting in it’s own right that we get to play in front of such awesome new crowds and also doing our headliner which is in front of kids who know who we are and are energetic.”

Most recently, the band has announced that they’ll be playing this year’s Sound & Fury, a hardcore and punk music festival taking place in Los Angeles in July. “I’m so excited! Like so excited! It was our first ever California show in 2012,” Fisher said. “So the fact that we’re doing it again is so sick and the lineup is so crazy and Have Heart is playing, they’re one of my favorite bands that was really, really important for me growing up.”

While on tour, Fisher and Henery have been listening to a variety of artists such as Kasey Musgraves, Phoebe Bridgers, Jimmy eat world and The Beths. When it comes to their local scenes, Fisher who lives in Richmond, Virginia lists the bands Deivant, Nose Bleed and Breakaway. “I’m really lucky, there’s always good shows,” he said. For Henery, who lives in Boston, some of his favorite acts are Mini Dresses Ovlov and Spencer Radcliffe.

In April the band will be touring Australia with The Story So Far before going back to the states and touring the east coast and Midwest. In the future, they’d like to go back to central & south america and tour in Southeast Asia and Russia as well.

Make sure to view their upcoming tour dates here and listen to Beside Myself.