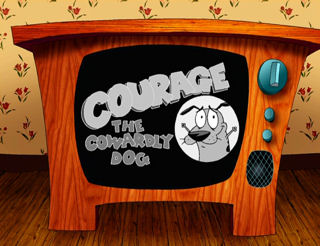 In One Sentence: A really cowardly dog lives in the middle of nowhere with the meanest old man yet the nicest old lady and everything after that is unexplainable.

Why You Should Watch: If you can’t handle gore or basically any live action horror, you get to be creeped out without being scared for life…maybe. Okay yes this is a cartoon but in case you missed it in the 90s and early 2000s some WERID sh*t went down at Cartoon Network that you can not tell me did not involve drugs. But this show is no Adventure Time or Chowder, it went far beyond just being abnormal.

If you watched Courage the Cowardly Dog growing up then you might remember being scared from a show that literally follows a mumbling purple dog with a hole in his tooth. So why was it so terrifying? Well for one, the main characters of the show are just regular sketched cartoons while many of the guest appearances from potential evil beings were CGI. Most of these “monsters” had to be slenderman’s friends, just human enough to make you uncomfortable. “The House of Discontent” and “King Ramses’ Curse” are some standout episodes.

The comedy added a disturbing yet necessary juxtaposition to many of the plot lines.  I think why this show was so odd was mainly it’s unpredictability at an age where many of the viewer’s minds would have been peaking in imagination. Other shows for the same age group played on stereotypes, while Courage played on everything but.

The show didn’t shy away from violence, anger, fear, and darker themes. Maybe in a way it was kind of revolutionary, simply a show about how this world is truly scary at times but ultimately you (like Courage) get through it.

Favorite Line:  “There’s no such thing as perfect, you’re beautiful as you are, Courage. With all your imperfections, you can do anything you want to do!” – Bathtub Barracuda