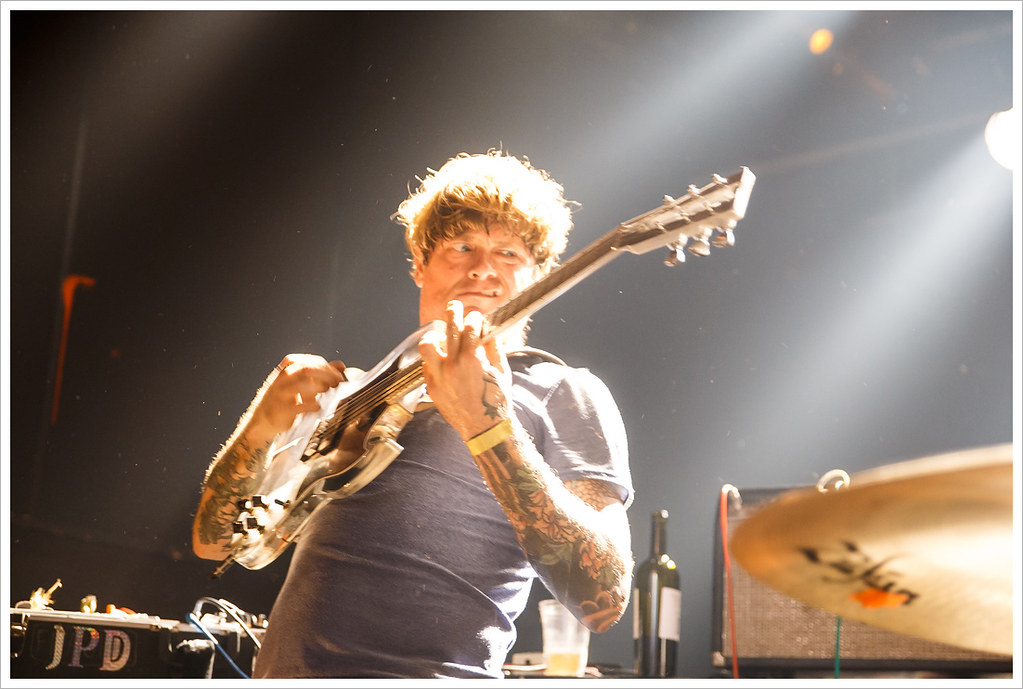 California garage-psych lifers, Oh Sees, had a three-night residency at The Warsaw in Brooklyn this past weekend. One of our editors, Eli Enis, lives in Pittsburgh, but he was visiting NYC and decided to snag last-minute Oh Sees tickets to see them with our EIC Henderson Cole. The show completely defied their respective expectations. Check out their collaborative review of the gig below:

What were your expectations going into the show? What were you looking forward to about their set?

Eli: I’ve been an Oh Sees fan for a number of years now but I never had the opportunity to see them live until now. Given their roots in the SF garage/surf/art-rock/punk scene—which is a universe that’s highly focused on both performance and live recording, moreso than perfectionist post-production—I knew that their show was an extremely important component of their band. That being said, I knew that they had been around for over 20 years and I kind of assumed, foolishly, that their age and longevity in the scene would’ve worn on them. I anticipated an incredibly tight set, but I honestly had no idea what to expect from the crowd (fans of virtuosic bands are sometimes pigeonholed as joyless nerds) and I didn’t know how much energy they’d be able to muster on-stage.

Henderson: I didn’t really have any expectations going to the show. I actually mis-remembered it as a So So Glo’s show until pretty much the morning of. I had heard a little bit of the Oh Sees before, but I hadn’t really ever been a fan. It’s not that I hated it, but they have a super deep catalogue and I never really got into exploring it. I have never really been a huge fan of jam bands or psych-rock, probably just because I have an attention span that prefers a shorter track length, so I was optimistic but unsure of what to expect.

What did you think of the band’s actual performance of the songs? How tight they were, how they sounded, etc.

Eli: The band put on the tightest, most exhilarating, and most intensely rockin’ set I’ve seen all year, hands down. Frontman/guitarist John Dwyer is an absolute force on the stage, cradling his translucent guitar just below his chin as he scurries up and down the fretboard with precision, taste, and unparalleled character. Directly beside him were two drummers who pounded out the unrelenting rhythms in otherworldly tandem; alternating between the same patterns in perfect synchronization and trading ticklish fills. The group was rounded out by an unassuming bassist and a keyboardist who was tucked behind the drummers, holding it down while Dwyer and his drumming duo gunned through myriad burners from their 2010’s catalog.

Although Oh Sees are rooted in surf and garage-punk, genres in which simplicity is central, their last five or so albums (they’ve dropped roughly 22 albums in 22 years) have a heavy prog element to them. Without being convoluted for the sake of being convoluted, Dwyer’s compositions are filled with five-minute instrumental jams and bizarre detours into spacy, jazzy, funky, and metallic psychedelia. Their setlist managed to traverse their many moods without losing itself in any one style for too long. And when they did get lost in a saucy jam, they always reigned it in and returned to the main riff with momentous zeal. They sounded so fucking big and full with just one guitar—I genuinely don’t know how another guitarist could’ve even kept up with Dwyer’s tap-heavy playstyle.

Henderson: As soon as they got on stage with the two drummers right upfront playing perfectly in sync, I was blown away. They were both drumming ferociously for over a full hour, front and center. It was honestly the most incredible part of the whole show for me. The performance, because of the drumming alone, was endlessly interesting, but the additional flourishes from the constant guitar solos, occasional hooks, bass lines and keyboard parts really kept the energy at 1000%.

What did you think about the band’s stage presence?

Eli: The band were a riot to watch. Dwyer is a true rock ‘n roll lifer, a man from another planet who plays the guitar like he was born to do it. This was only the first of three nights in a row at The Warsaw, and he joked early in the set about not blowing all of his energy on the first night. For a creative as ceaseless as him, there’s probably no shortage of gas in the tank (nothing a few beers can’t fix, at least) because he didn’t stop moving the entire night. He does this thing when the band sinks into a motoring groove where he crouches down and holds his guitar—which is resting just beneath his chin—like a bazooka, strumming casually and then leaping up to tear into a screeching solo. Another endlessly hilarious move is when he brings his ax up to his mouth and presses his lips against its see-through body, bulging his eyes out into the crowd like a blowfish. The drummers were sweating bullets but somehow never got visibly tired, thudding and crashing mercilessly without ever missing a beat, and only occasionally glancing at one another to check their coordination.

What did you think about the crowd’s reaction and/or how they interacted with the band/those around them?

Eli: I had seen a handful of live videos of the Oh Sees over the years, none of which did an inkling of justice to how they actually sound when you’re 20 feet from the stage. But in some of them the crowds looked absolutely dismal, standing like statues while Dwyer swallowed the mic and thrusted about. Fortunately, the Warsaw crowd was a joyous scrum of exuberant fans of all ages, genders, and sizes. As someone who attends a lot of boiler plate indie-rock shows, it’s refreshing to remember that not all concerts are full of stiffs who’re too cool to show their excitement. At this show, there was a surprisingly active push-pit, crowdsurfers, people jumping up and down, bopping back and forth, boogying in every direction, and partaking in every one of Dwyer’s primal “woo’s.” The beers were flowing, so that definitely contributed. But people were absolutely ecstatic to see this band that’s been around for 20 years, and everyone seemed equally stoked for the new songs and the hits.

Was there anything you didn’t like about the show?

Eli: Re: the band, I literally can’t think of a single thing to be nitpicky about. I think they did what they do better than I could’ve possibly imagined. However, although the crowd was a blast to be in, for some reason there was a strangely high number of people who would just fling themselves through the crowd when they wanted to move closer. Not people in the pit, mind you. But people who went to get a drink, use the bathroom, or just get some fresh air. When they’d come back through the side door they wouldn’t just weave through the tightly-packed room to an open space, or kindly tap someone on the shoulder to let them know they’re pushing by. They’d just launch themselves into people who were standing still. I’ve been to a zillion hardcore and punk shows over the years, so I’m no stranger to a rough atmosphere in which shoving is the norm. This was an entirely new vibe for me, but I couldn’t really get mad anyone because the people who were acting like that were just so excited to see the band. It was almost charming in a weird way, despite it being a relatively rude and inefficient way of acting. That’s all I got, otherwise it was a near-perfect gig atmosphere.

What struck you most about the show overall?

Eli: I was most struck by overall energy of the room, and how effortlessly the excitement transferred from the stage to the crowd. For a band like the Oh Sees, it can be difficult to gauge just how popular they really are. Streaming numbers only tell so much, but the Spotify stats aren’t particularly impressive. If you read the music press or look at the current landscape of popular music, there’s not really any indication that sweaty psych-rock is still in vogue—even in the rock world, the underbelly of the streaming era. And yeah, it was New York, so maybe Oh Sees aren’t drawing great crowds all over the country. But if you walked into that room the other night without any prior knowledge of who the Oh Sees were, there wasn’t anything that prevented you from thinking they’re one of the most brilliant and beloved rock bands in the world.

Henderson: I was insanely impressed that a garage band could hit it that hard after being around for 20+ years, especially in the somewhat experimental way they performed. Really impressive. I also didn’t realize until I took my earplugs out how incredibly loud it was. Without earplugs that wall of sound might blow your head off.