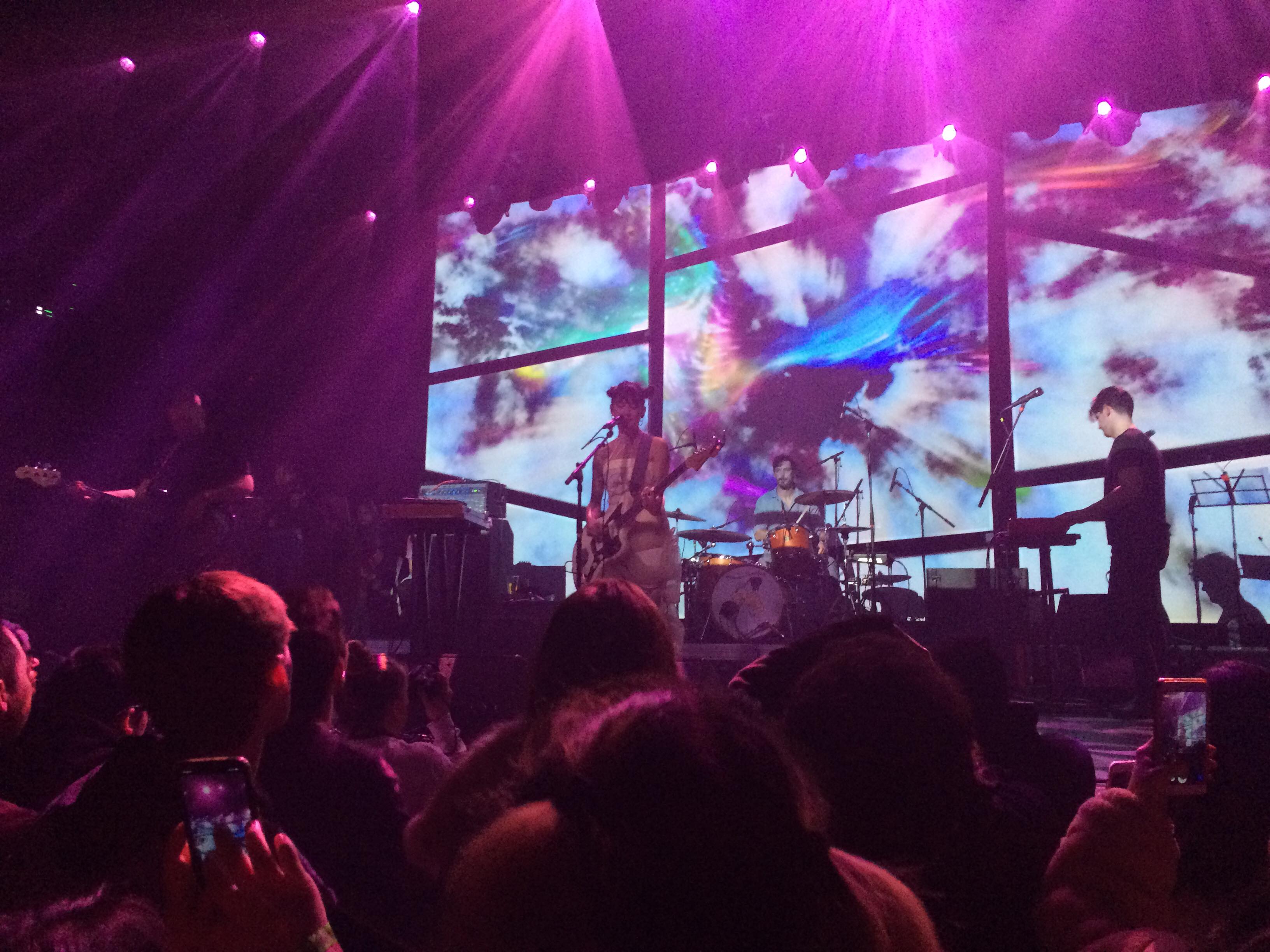 Despite the sub-freezing temperature, none feared the trek to Brooklyn Steel, a relatively new, 1,800 capacity music venue in East Williamsburg, where Japanese Breakfast—the current musical project of Michelle Zauner, formerly of Little Big League—was headlining the first of two back-to-back sold out shows on 1/17.

Japanese Breakfast’s Psychopomp (2016) and Soft Sounds from Another Planet (my personal favorite album of 2017) have proven her to be one of the finest and most illustrious songwriters in the realm of dream-pop and indie-rock. Zauner’s star has been steadily rising, and now Japanese Breakfast have found themselves headlining Brooklyn Steel (where they opened for shoegaze legends Slowdive in 2017), a sprawling behemoth of a venue complete with candy vendors in bathrooms, multiple bars, and a stand selling some sort of artisan French fries.

By the door’s opening at 7pm, a large group of concertgoers had already accumulated, the most dedicated of the bunch taking their positions near the stage and refusing to budge.  As the hour went on, more began to filter into the room, and as Hand Habits’ Meg Duffy took the stage at 8pm, about half of the room was filled. “You’re here early,” they said, before launching into a half-hour solo set on a borrowed guitar. Duffy’s music, composed of reverb-laden guitar, minimal loops, and a powerful voice that rivals the guitar without overtaking it, slowly drew the audience in. People listened respectfully (causing Duffy to wonder aloud if their attention was due to the headliner’s warning of death to those who acted rudely), swaying back and forth to sounds evoking a bittersweet waltz that I found so enthralling.

Not long after Hand Habits had finished their set, the night’s second opener, Palehound, had taken the stage, and by then it seemed the entire room was full. Launching into their set, the audience immediately began to move as they shot off with “If You Met Her” from their 2017 release, A Place I’ll Always Go. Hand Habits’ musicianship is nothing to sneeze at, and neither is Palehound’s, with a pounding drummer, cutting bass player, and bandleader Ellen Kempner’s strong voice and piercing guitar playing. Announcing the completion of a new album, Palehound’s set was composed of songs new and old, slow and fast, and by the set’s end, the audience was electric with excitement.

Soon enough, the place was absolutely bustling with the Japanese Breakfast fans of young New York. Michelle had been hyping up the shows as special occasions, and people could tell that they were going to be different just by the setup; much more than the usual drums, amps, keyboards/samplers, and guitars. Eventually, the lights darkened and the crowd went berserk as a large screen fractured into nine sections at the back of the stage repeatedly showed the band’s name. Soon, the group walked out to the sound of Soft Sounds interlude “Planetary Ambience,” joined by a four-piece string section and two horn players who took their own positions behind sheet-music stands. Zauner was adorned in an elegant, white dress marked by a frilled pattern that snaked throughout. Its standout nature complemented Zauner’s alluring stage presence.

With all in position, Zauner briefly greeted the audience before leading the band into “Jimmy Fallon Big!”, a song from the previous album which had never been performed live, and the presence of strings and horns made it feel all the more momentous. The song itself is brief, but the effect seemed to last the whole night, with the audience seemingly waiting with baited breath for what spectacular thing they would do next. At its conclusion, the string and horn players departed (but would return sporadically throughout), Zauner put her guitar down, and the band immediately leaped into “Machinst,” the first of a string of songs meant to annihilate the dancefloor. The place seemed to explode.

Alongside succeeding cuts such as Psychopomp openers “In Heaven” and “The Woman Who Loves You,” as well as Soft Sounds hit “Road Head,” the audience would mirror Zauner’s movement. As she enacted anything from hopping across the stage between different members of her band, to waltzing slowly as she sang into the mic, she had a smile fastened to her face—and much of the audience couldn’t help but smile in response. Before slowing the pace, she acknowledged the distance they have made over the years that’s led to this moment, thanking everyone for giving them such an opportunity.

Then they went into “Boyish,” which was followed by “The Body is a Blade,” a song about moving on after tragedy. It was accompanied by images of a young Zauner and her late mother appearing on the screens, which was met with cheers from the audience. Not too long ago, Zauner had penned a very touching article on grief and reminiscing about her mother at H Mart for The New Yorker, and the impact of her mother’s passing is evident in much of her work. Despite the song’s subject matter, she still smiled. And with the images in the background, it was clear that despite missing her mother dearly, she’s found the strength to move forward. The moment made me tear up. Looking around, it didn’t seem like I was the only one.

Her later performance of “Till Death” was another heart-wrenching instand, with a delivery so joyous, loving, and sincere that it was impossible to ignore. In between songs, she still engaged the audience, telling of a time when fried rice balls served at Brooklyn Steel came to the rescue after an encounter with a bad street hot dog.  After a brief departure following “Everybody Wants to Love You,” they returned with a cover of The Flaming Lips’ “Race for the Prize,” accompanied by Duffy of Hand Habits on guitar. Not all were familiar with the song, but two extremely enthusiastic people next to me were, and their singing-along was not ignored by Zauner.

The night ended with a soaring version of “Diving Woman” that utilized all the string and horn players to create an enormous wall of sound, making a fantastic conclusion that mirrored the set’s start. The crowd began to filter out, and as I followed suit, I felt something. Japanese Breakfast had always put on great shows, but that night felt different. I felt as I had witnessed something special. I hadn’t seen Japanese Breakfast simply perform, but I had seen Japanese Breakfast itself. I had seen what their music is, and what it means to the band, to others, and to myself. It seemed so perfect. And knowing them, it’ll only get better going forward.