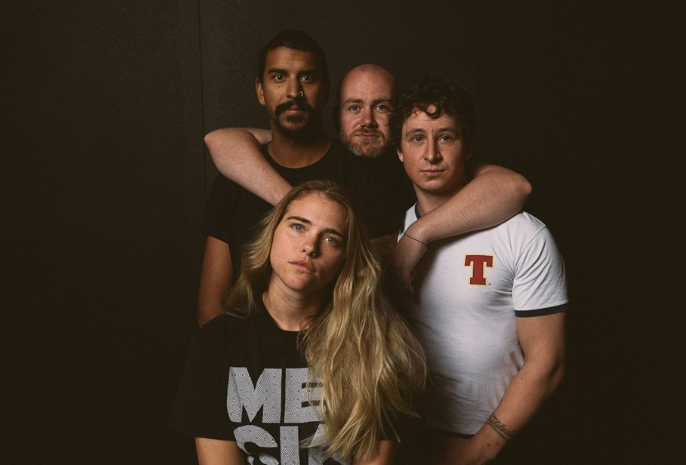 Made up of Natalie Foster, Greg Rietwyk, Frank Lees and  Rufio MacRae, the Australian rock band’s latest record, Wasted Energy, is full of power and introspection. Natalie’s demanding vocals call for change in tracks like album opener “Separate Houses” which is backed by melodic instrumentals that add to the weight the song carries. Single “Thinking About You” carries a different energy with a slower paced, guitar led track that erupts into a ringing guitar solo. Listen to the record and check out their influences from throughout the band’s formation below.

Since we started this band people have often made comparisons between Press Club and Hüsker Dü. I think there’s a bunch of reasons why. At ground level, their instrumentation is the same as ours. One guitar, up against a bassist and drummer. That influences what you’re able to get away with on your instrument. Without a second guitar there’s heaps more room for people to play without clashing with someone else’s part.

Sonically we play with a similar style to them too. Grant Hart plays fully involved drum parts with a consistent high energy. Then there is Bob Mould’s treble heavy, fuzzy, busted speaker guitar tone. Every so often he plays a little, lyrical flourish, but as a whole, his guitar parts really hold it down while Greg Norton plays bass super melodically underneath. We approach writing our guitar and bass parts from a really similar perspective.

All in all there’s something that is really punk about Hüsker Dü, in the attitude of their performing. But their songwriting has a really approachable, pop sensibility. It was never a conscious decision to write music that sounds like them, but it’s a comparison I’ll happily cop any day.

I can remember the very first time I heard this Philadelphia band on RRR radio here in Melbourne before Press Club existed. I INSTANTLY wanted to make music like them (honestly, like 30 seconds in I was like “I want to be in this fucking band!”). I’d never heard a band that I was so ready for. The slap back and overdrive on the vocals is something that I was desperate to incorporate on our first record, Late Teens and it’s something that features on a most of our tunes to a varying degree. That’s something Sheer Mag are single handedly responsible for.

They didn’t have music listed anywhere but on bandcamp, which I also loved. Yeh, you limit the reach of your music, but anyone who really wants a piece of you will doggedly track you down. I did and I bought everything that they had ever released. I’d never done that before.It inspired me to think differently about how we operate as a band and it proved to me that there was more than one way to skin the music-industry cat.

Their songwriting is the main attraction for me though. The arrangements are super complex in their form and the songs are harmonically dense as fuck. I don’t know how she comes up with her melodies but they rock me to my core. The interplay between the bass, guitars and drums is flawless too. I’m a massive Thin Lizzy fan so hearing layered guitar harmonies got me straight away. I love this band, no band has ever been so perfect.

Cloud Nothings are a pool of musical and conceptual ideas that we constantly dip into when writing Press Club music. To us, they perfectly tow the line between straightforward and far out, and we reference them whenever trying to come up with ideas out of the norm.Take a song like ‘Psychic Trauma’ from the album ‘Here and Nowhere Else’.

While the form follows a standard verse/chorus/bridge structure, they make it feel more free flowing by varying the tempo and intensity between sections. Tempo changes are something that we’ve been experimenting with since the first record, but on this second album it’s really become a part of the song writing and is featured pretty heavily on a couple of songs. ‘Psychic Trauma’ ends with this hard hitting, almost psychedelic, freak out section. That’s something we’ve been attempting to do our own version of as well, to varying degrees of success.

This is just one song with a couple of ideas we ‘borrowed’, but there’s heaps of other ideas that we get from them. We used ‘Here and Nowhere Else’ as a reference when mixing the album as well, because it sounds so colossal.

I remember Greg getting me into Bully a few years ago. I remember constantly asking who he was playing. And I remember believing every word that was being sung. To me, that’s such an important part of music – hearing the emotion, the tension, the angst and the excitement behind the lyrics. It’s something I strive to do every time I sing and Alicia really nails that on their records.

When we were writing ‘Wasted Energy’, there were parts in some of the songs that I felt were calling for a bit of a yell or scream. I’d never really nailed it before and was finding that when I did try, it wasn’t having the effect that I wanted it to. In our first album, ‘Late Teens’, we achieved that crunch by using a bit more distortion on the vocals but I really wanted to do it a naturally this time round. I ended up going to see Bully play at The Tote in Melbourne early last year and (watching very analytically) was shown that you can scream with energy and still convey a sense of melody at the same time. We rehearsed the night after and wrote ‘Chosen Ones’ which incorporates a Bully-like yell at the end of it. Nailed it?

Royal Headache for me epitomise what an Australian punk band should sound like. Raw, nasty but full of cockney spirit and melody. There is something about hearing someone croon like a soul singer over edgy garage guitars and loose drumming that just hits that spot for me. To say we draw just a little inspiration from these guys would be understating it.

I definitely was influenced by the rawness of the recording style, particularly on their debut full length album. It sounds like a band all in one room just going hammer and tong, the quality of the recording is not fantastic, but the vibe is at an all time high. There is so much energy you can almost hear the neighbours next door screaming at them to shut the fuck up. I always wanted our records to have that same kind of energy. Something that you can blast at an ungodly hour to piss of the suburbanites that moved in next door to experience the “inner city culture”. Anyway enough talk. The easiest way to experience their raw power is by listening to them.