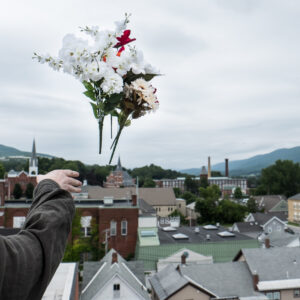 While most of the emo bands still active pull more from math rock than the classic ’90s sound, there’s emerged a contingent of bands who pull more from the heavier, more punk-inspired sounds of the early era: Feverchild, The Arrival Note, and perhaps chief among them Sinking. Active since 2018, the Massachusetts foursome begin playing a rough-around-the-edges, arpeggio-heavy style of emo that borrowed as much from more straightforward and aggressive end of the spectrum as it did the softer, more slowburning branch. With their latest EP Misshapen World, they’ve taken a slightly different tack. Sinking has, by now, sanded off most of the vestiges of midwestern ’90s twinkle and in their place is just crunchy, punk-tinged emo; in other words, Misshapen World is less Mineral and more Samiam.

The other significant difference is that Misshapen World is far cleaner than earlier Sinking material; the crisp production better suits the more driving sound this release. The EP kicks off with “Petunia,” released as a single late last year. It’s a fitting introduction to Misshapen World, a twisting, hooky alt rocker. It’s the clearest choice for a single on the whole project, and maybe in Sinking’s whole catalog; it’s easily their catchiest, most melodic track.

“The Queue” and “Serpent,” which appeared before Misshapen World was even announced on their Live at Gate 4 EP, follow “Petunia.” The former crawls through clean, melodic guitar lines before hitting a towering chorus; it’s “The Queue” that comes closest to the slow-churned start-and-stop emo of their first EP. By contrast, “Serpent” is the song on which it’s clearest that Sinking’s members cut their teeth in hardcore bands; it’s dark and heavy–until the band pulls things back for a jangly post-chorus intermission. Its final 30 seconds transition again as the band shifts into their most twinkliest and “Serpent” bleeds into the instrumental “Interlude.” It’s classic arpeggiated, slow-as-snowfall emo.

“Interlude” flows straight into the closing “Long Drawn Day,” on which all the pent-up energy from that song erupts. As on “Serpent,” “Long Drawn Day” draws readily from punk; it ends Misshapen World on a propulsive note, a last shot in the arm. There’s a sense, at the end of the EP, that Sinking’s broken through in some way. The polish, the tighter songwriting, the more straightforward direction–it all adds up to a big step for the Massachusetts band. Misshapen World is a good EP, but it feels like a transitional release, like what leads up to a great record.

Misshapen World is out 4/29 on Patient Zero Records.