Home  >  Artist Interview: WHY NOT

Artist Interview: WHY NOT 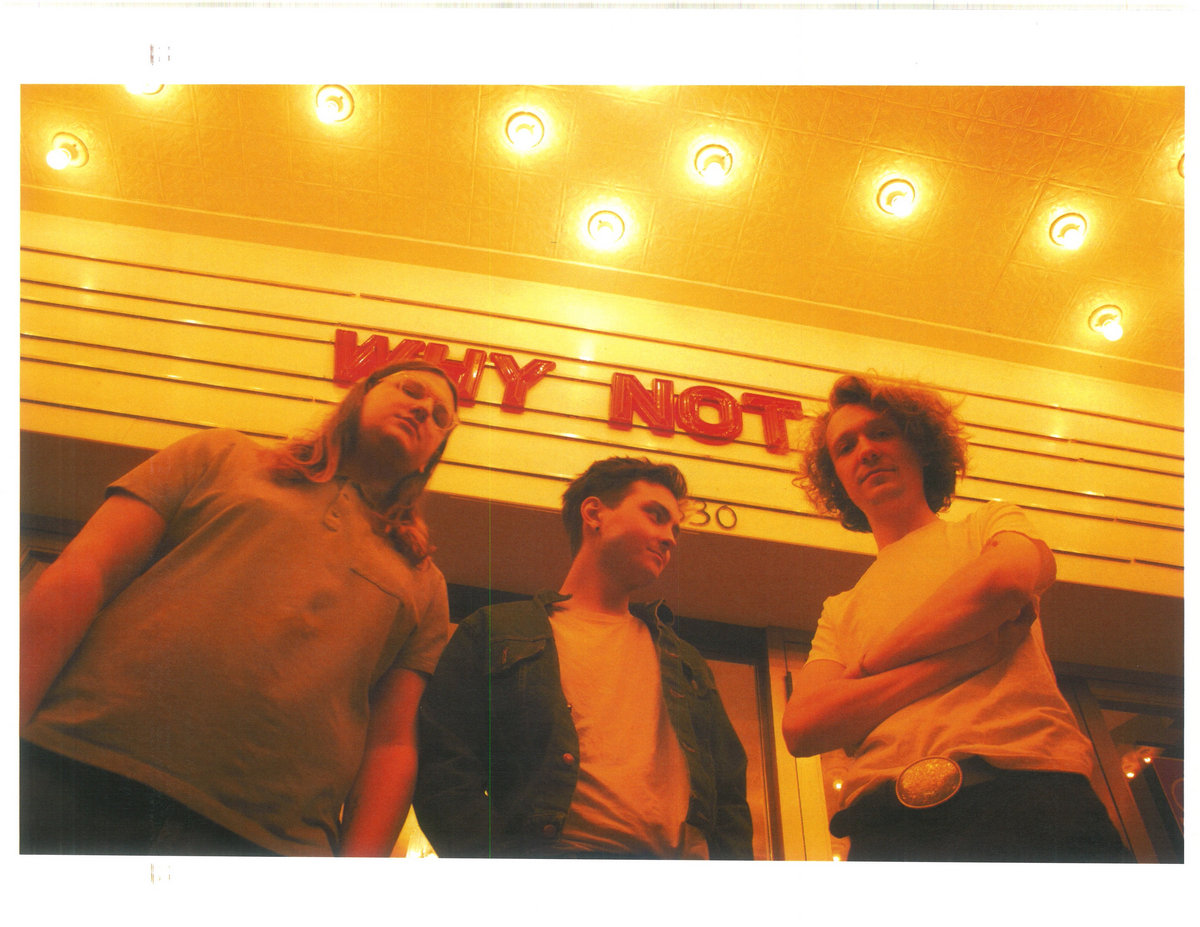 WHY NOT has been playing music together since its three members were in high school, and they’re finally about to release their debut LP. Their music is eclectic–although guitarist Isaac Dell describes their upcoming WHY NOT as “basically pop songs,” that’s selling themselves short. The ten tracks on WHY NOT embrace every flavor of pop music imaginable, resulting in a dense, layered, and extremely replayable record. It’s perhaps best described as hyperpop-punk, taking the left-field production of hyperpop and imbuing it with the melody and attitude of pop-punk. We sat down with the band–Dell, vocalist/multi-instrumentalist Henry Breen, and drummer Josh MacGregor–to discuss writing a record in quarantine, their proudest moments, and their love of Tool.

How has COVID impacted your ability to be WHY NOT?

Henry: Things are going good, besides currently having COVID. That makes it hard to be WHY NOT. I mean, as far as generally–we were just talking about how, in the last two, three years, we’ve been working on the record, and how COVID has played such a large part in transforming that process. Prior to, we were writing and whatnot, all with the intention of playing live and such, and then it became a different process. We were writing songs and finished the album without all being behind our instruments at the same time. We were all in the room together, but that’s how it all panned out.

Isaac: I think it shifted our trajectory as a band. Honestly there’s good and bad. It definitely allowed us to focus on the recorded song–what you can do with production. We thought outside the box of how we usually construct a song. I think it’s a much fuller sound that normal because of that focus on production. But at the same time, they were not written with the intention of playing at a house show. It’s all very different.

So does all of that, what you just said, apply to the VERY WHY NOT EP also? Because I know that only came out in January.

Josh: That one’s the complete opposite. That EP was a collective effort, all of us in one room collaborating in a short time.

Isaac: That was made after the album was finished. Album’s been done about a year now. That EP, we went to my farm in Wisconsin for a week, and then a huge chunk of the EP came from that time. It was impulsive and we–why wait til after the album? But this is kinda a sonic bridge to the album, so it felt right to put it out now.

Interesting–it feels the other way around to me, that this album bridges your older stuff, and then VERY WHY NOT is a step further from there.

Josh: We went a little far–it’s like pulling back a bit after that album.

Isaac: The EP is like the album on steroids, and then the album is the distillation of us.

So that really is VERY WHY NOT.

Josh: Yeah, and this is just WHY NOT. Or it’s very, very WHY NOT.

How different, then, was the writing process for this LP versus that EP?

Henry: Well, like Josh said, the EP happened all at one time–at least, the seeds were planted. We were all together figuring it out, what to do. Making those decisions as a group is definitely different than what the album process was like. A lot of the seeds for the album were conceptualized at the same place–a lot of the album was written at Isaac’s farm. We wrote the first few songs in summer 2020, right after–or real lockdown–and that prevented us from being together. That was a lot of sending demos back and forth, brainstorming for when we get together, and it was a little more piece by piece. We have demos here, demos there, and we sent them to our producer Caleb, and he’d do his thing. There were two one-week chunks of us together in the room to finish the songs.

Focusing more on the production side definitely comes through. This is a super dense record. I’m curious with all three of you here–what’s one moment on WHY NOT you’re most proud of?

Josh: The little break in “GOLDN” with the drum fill! That’s my personal proudest moment.

Isaac: You crushed that.

Josh: Thank you, thanks.

Henry: “NYC” as a song is pretty special to me–I can’t remember the circumstance, but it was like Easter or something and I was supposed to see my family and before I left I figured out the chords and I was writing down some lyrics. The whole time I was at my aunt’s I couldn’t wait to go home and record. The demo I did that night is what’s on the record, except Josh’s drums. That song was largely untouched and that’s–it’s so cool to me, the preservation of that moment.

Isaac: I think “In Love with the Sound” has a special place. I spearheaded that and it was so much fun. It was one of those moments, maybe similar to “NYC”–something really pure came through. We produced it a lot more, and the guitar solo I’m stoked on, but that song. The album as a whole, too, I’m proud of. It’s the most cohesive, I think, piece we’ve ever made and I am just–it was a lot of sitting in limbo, where the EP was a fart of creativity. It was so much fun, all of us sitting together with Caleb, us piecing it together.

I wanted to ask about “Shoot You in the Head.” That’s definitely not how I would’ve expected you to open this record. It’s such a curveball, so what was up with that, opening WHY NOT with the quietest, chillest song on here?

Josh: I think that’s why.

Isaac: It was the first song we wrote for the album.

Josh: Same time as “No Suggestions.”

Henry: Not knowing what the purpose of the song was, we thought it was a cool palette, and I think the last chunk of sessions we were like, “We gotta get this shit out.” I can’t remember who said, “Shoot you in the head,” but–

Isaac: I think I said it as a joke.

Henry: We started throwing jokes at each other writing the lyrics and we ended up liking the message. We put some thought into it and it started making sense.

I know you’ve said in interviews before you wanted to be a metal band. Is that for real or a joke?

Josh: It feels like a fever dream but it’s for real.

Isaac: We roped Henry into it, and we wrote one song, and it was not it.

Josh: There’s two songs that we did that prefaced WHY NOT as we know it. I think they’re lost to time though.

Isaac: We just stopped doing that and started being ourselves.

If you were to go back to your younger selves and you played them WHY NOT, the record, how would they feel?

Isaac: I’d be shocked. It was a journey for me, coming around to pop–

Josh: You were a rock purist.

Isaac: It’s crazy–these are basically pop songs if you boil them down. I think I’d like it. It still sounds like us to me.

Henry: I’d be like, “What happens in the next five years?”

Josh: I’d respect it. I’d think it’s interesting, but I respect it. I don’t think I would be ready. I was just in the start of my musical journey in general.

What’ve you got planned the rest of the year?

Henry: We’re going on tour with this band called Ultra Q. We’re going on a monthlong tour, then doing some headline shows on the east coast, then I think it’s time for the next record.

Isaac: A lot of shows to support the album. We’re gonna try and ride this wave. I’m sure that the next one’ll start up soon.

What do you want people to get out of this record?

Josh: I want them to think about love. I think it’s a very loving record. Have a mental orgasm to the music. Literally.

Isaac: What I’ve been saying is that it was made during a dark time, but it’s really about joy. I feel like that’s what I want–if I make something right now, I want you to feel joy from it. They might be complicated lyrically but it’s joyous and it’s upbeat and it’s fun.

Josh: I think we’d be honored if anyone feels anything. If it’s natural to feel anything, just feel something.

Henry: Lyrically, I have a habit of writing without understanding the message yet. It–98% of the time, it rears its head later on and then I remember what was weighing on me when pen was put to paper, and when that flips to someone perceiving it, they can–and I think the nature of that process tends to make things kinda broad–when someone hears it for the first time, I hope it can find its way to be relevant to their life. I hope it hits them how they need it, not necessarily how I wrote it.

WHY NOT is out this Friday.