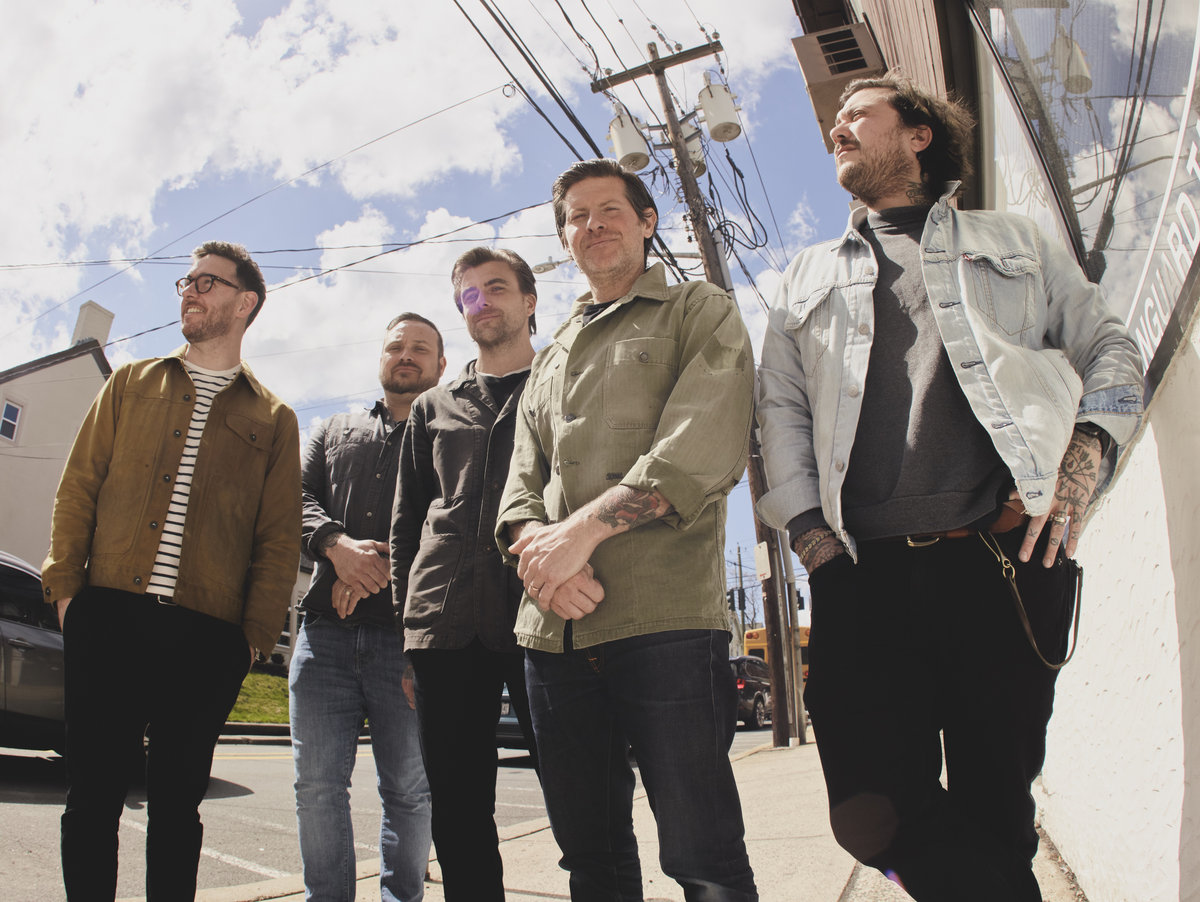 LS Dunes’ debut LP Past Lives is primed to be one of the biggest releases in alternative rock in recent memory. The band comprises stalwarts of the post-hardcore scene: vocalist Anthony Green, guitarists Frank Iero and Travis Stever, bassist Tim Payne and drummer Tucker Rule. But don’t expect LS Dunes to be some fusion of previous bands. The five-piece’s vision is fresh and all their own, from the hypnotic “2022” and the frenetic “Antibodies” to the blistering “Permanent Rebellion” and the eerie denouement of “Sleep Cult,” Past Lives is the sound of a team of veterans coming together to create something new. We caught up with Tucker Rule to discuss the band’s origins and (undoubtedly bright) future.

Would you mind telling me a little about how LS Dunes came to be? It’s been a pretty mysterious rollout.

So many people have so much access to everything these days. We’re not doing it to be jerks–we just want to keep things exciting! It’s more fun to find things out slowly on your own than to get a barrage of input, know everything, and move on. To be honest, I wanted to start–before the pandemic, emo night was a big thing, and clubs were selling out–I wanted a side hustle because I was going to have a baby, and I thought, “I should get my friends together and do a live emo cover band.” I was working it out with my manager, thinking about who to ask. I’ve always wanted to work with Anthony. It never panned out. When the pandemic hit, my manager said, “You should just start a band. Instead of making a cover band with those guys, just make a band!” I asked Tim and he was down–we’ve been playing together so long that it was natural, and you need a tight rhythm section, and he’s so good that he makes me better. Frank and I’ve been friends for a long time, and we were in Future Violents together and that was the first time we ever wrote together, and it came so naturally. We spoke the same language. Travis has been one of my favorite guitarists for so long, and we took Coheed on one of their first tours. Anthony was the last piece of the puzzle, and I love his voice and stage presence and energy, and he’s a real fuckin’ person. We wrote a bunch of songs before we asked Anthony, and I sent him the songs, and asked if he’d be down to lay some vocals down. A couple days later I got “Antibodies” back. It was good, man. Right away it gelled. I told him, man, “All your friends are in the band if you wanna do this.” He was so excited. We were like teenagers.

So how much of the record was just you prior to bringing everyone else onboard? Or was the whole thing collaborative?

It was very collaborative. Before Anthony heard anything we had five or so songs. “Antibodies” was the first song he sang over, but it was the first one we wrote too. It’s one of my favorites on the record. That was the song that turned us into a band.

“Antibodies” into “Grey Veins,” those are two of my favorites too.

Something cool about LS Dunes is that this doesn’t feel like Thursday, or like Saosin or Circa or any of your other bands. Was there any worry for you that people would come into this expecting it to sound just like your other projects?

We’ve got our legacy bands, sure, but put together, we didn’t want to take from our other bands. We play a certain way, each of us, and the concern right off the bat was gone when the first riffs were written. Because it was all remote–the whole thing was written that way–everything was done for the song. I know a lot of people who get older say it’s about the song, that less is more, but it wasn’t like that. It was just dudes playing together. It had to move quick because I didn’t want anyone to lose interest. I feel like everyone felt that way. It’s easy–we’re all dads! We’ve got lives outside of this, but we needed this. I think that was out the window.

It seems like it would be easy to rest on your laurels and just do the things you’ve always done instead of creating a whole new distinct band, for all of you. Is it freeing to have this totally new project in that way?

I think it is freeing. We’re elder statesmen. We’ve got our things. This is freeing because there’s no expectation–well, there is now that the word “supergroup” is out there, but people don’t really know what we sound like.

Which is a good point, because “Permanent Rebellion” is probably the heaviest track on the record.

I think it’s a different direction. That’s because we wanted to do something new, something that’s completely us. We’ve created us, you know? It’s unique to us. It doesn’t sound like Thursday, Coheed, MCR, Circa–they’re all great bands. The other members have great bands! But this is where we are. No one shot down any riffs. Everything that comes in gets worked on. We’ll send Anthony a bunch of stuff to sing over, and he always picks the hardest one. I’m grateful for that. I think that’s what makes us work. Whatever immediately strikes us, that’s what we go for.

I wanted to ask about “2022.” Obviously that was on Boom. Done. a few months back. Did you know that would be an Anthony solo track, or did it work backwards? How’d that process work?

Anthony, over a year ago, sent us a complete acoustic version of that. He said, “It’s too depressing to be acoustic. Can you make it real fuckin’ heavy?” The idea was to take this amazing depressing song and put it on LSD. I was the first one to go on it and I just played a basic groove. The original groove you hear on the song was the first thing I played. The chorus changed a little. Everything pretty much stayed the same, though, from our first ideas. That was fun. It was the first thing Anthony wrote for the band besides vocally.

How many shows have you played together so far?

Oh wow. I know I saw the video, but how was that set received?

It’s been amazing. We did Riot Fest in Chicago, and it was crazy. People had only heard “Permanent Rebellion” at that point. We played at one pm. We were the second band of the day! I thought no one would be there, and we were under-rehearsed. Tim and Travis flew in the night before. We had maybe one rehearsal, and we all freaked out a little bit. We know how to play these songs, but you figure something out, this muscle memory, that we didn’t have yet. We didn’t wanna think too much. But we’re all pros–I know that sounds like a dickhead thing to say, but I mean I know we could pull it off. It was crazy.

Do you foresee this becoming a permanent or semi-permanent project going forward?

I know it will be. We wanna work this. We’ve got a label behind us, and we wanna earn our keep. We’re excited about this. All five of us, music is our lives. We’re willing to be away from home because we love this and we need this. Anthony said, “This band became an addiction,” and he said it best. It’s called LS Dunes–it’s like a drug for us. It’s a full-time thing, and it’s the kind of thing we will make work.

You said “Antibodies” is one of your favorites. Is there anything else on here you’re most excited for people to hear?

I really love “Grey Veins.” Sal Villeneuva, Thursday’s old producer, he once said about “Jet Black New Year” that “there’s a lot of meat on that sandwich,” and that’s how I feel about “Grey Veins.” There’s so much going on. “Blender” is a guitar song, one of my favorites. Honestly, man, fuck it. The record’s full of bangers! There’s no sleepers on there.

Past Lives is out November 11.