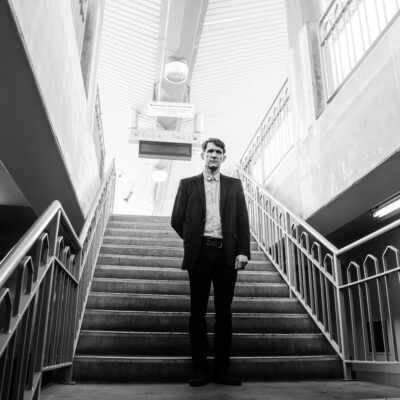 Tim Kasher is one of the most prolific songwriters of his generation, having released 20 studio LPs since 1994, with a number of projects (Cursive, most famously) – and he’s about to add another. Middling Age will be Kasher’s fourth solo record, and perhaps his most intimate yet. The Alternative caught up with Kasher in mid-March for a conversation about Middling Age, out on Friday.

So how have you been doing throughout COVID and quarantine? How’s that been treating you?

I just am one of the totally fortunate ones. Well, I suppose there’s two sides to that, but for the most part, I managed to get through it – or, I should say, I’m still managing. But my times of year are when I’m home working on stuff, so I just worked on various writing projects for two years, which is great. The other side of it is that I’m in an industry that was shut down and was threatened to be the last to ever open. [laughs] I did, though, I managed.

Most of this time you had already had most of Middling Age finished – correct me if I’m wrong – so what was the writing of that like? I know you’ve been busy with No Resolution, Vitriola, then Get Hurt all in a short time before COVID.

I was writing – Jesus, the timeline’s getting hazy! It’s been years – I was writing it and was pretty deep. I started it shortly after I finished Vitriola, because Get Fixed was the same sessions as Vitriola and we felt averse to doing a double album because we frankly don’t feel like we’re a big enough band to garner enough people’s attention for 70 minutes. Not many bands can! We thought we should keep it concise and release the other half a year later. That gave us the opportunity to add to it a little. But it gave me the time to start the next project on my desk, Middling Age, and I did continue to work on it into the pandemic, but only because I had nothing else to do really.

I’ve spoken to a few bands who have had records finished since, like, February 2020. How long’s Middling Age been done? How long have you been sitting on the record?

Funny thing is we’re still struggling to get the vinyl out on time. [laughs] If the album was truly done so long ago, we could’ve had the vinyl a year ago. The album was written and mostly arranged but I shelved it a couple times. There was nothing pressuring me to finish it, and I kinda feel like that was healthier as well, and I stand by that. In my mind, to let it be a longer writing process versus finishing it and just shelving vinyl was a little stranger. Though I had it mostly finished I stretched out the process. It didn’t actually get mastered a year ago, or maybe last May – everything’s on a normal schedule now.

The song “The John Jouberts” is one that really stood out to me – it’s got such an interesting story, and I’m really curious where that one came from.

Years ago, with some friends I thought of starting a little punk rock band, and then, sort of as a dark joke, calling us The John Jouberts. But I thought about it, and that sort of humor, it just seemed unnecessary to me, cruel. If the families of those boys murdered by John Jouberts were to find out, why would they want to be reminded of something like that by some band? And, really, with the sense of community in Omaha, it really felt like it was happening to all of us. I didn’t feel the need to bring that back. The song was sort of imagining if we actually did do that, and then how these families might feel if they confronted us.

I think the song “Forever of the Living Dead” will be a really big hit for people, and it’s very cool you got Laura Jane Grace and Jeff Rosenstock on it, especially since that is so different from the sort of stuff they usually do. How did you get them on here?

Laura’s been a supporter of my work for so long, and when I decided I needed someone else on here, she was the obvious choice. Then, for Jeff, when I had the song done, I felt like there was something else missing to it. I thought of saxophone, and Jeff, he’s a great saxophone player, so I reached out.

I also thought it was interesting, that decision to open the record with that “Long Days” poem. Correct me if I’m wrong, but that’s your niece, no? Why did you decide to start that with her poem?

Yes, my niece. She’s a songwriter herself and she always writes these sorts of things, and I thought, for someone so, so young, to write a song like this was interesting. Using “Long Days” to open this album, which is about getting older, the anxiety and crises that come with that, it carries a certain weight to it that I felt right about. I do feel a little bad about sort of burying her under so many layers.

Middling Age is out April 15 via 15 Passenger Records.