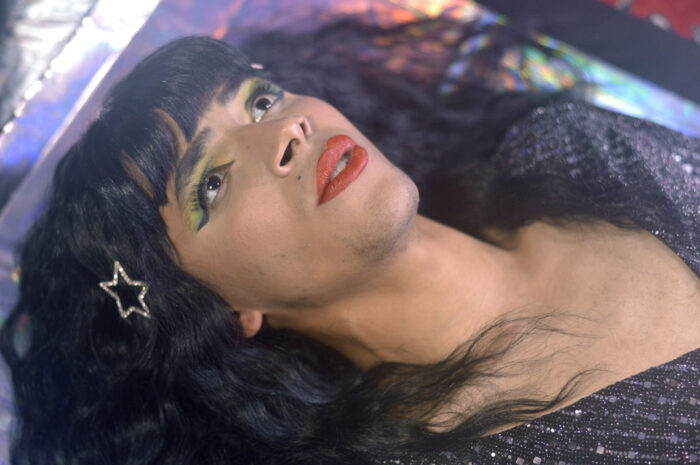 K Nkaza, who performs as Spring Silver, listens to all sorts of music, “from shoegaze to IDM to trap to orchestral music from the turn of the century–early 1900s type stuff,” as they tell me over the phone. They’re packing for tour, where they’ll be meeting up with Bartees Strange and Pom Pom Squad. Though I Could Get Used to This, Spring Silver’s latest LP, sounds virtually nothing like Farm to Table (or Death of a Cheerleader), the grouping makes sense. Like Bartees, Spring Silver is crafting their own sort of anything-goes indie rock, throwing IDM beats under Shudder to Think riffs and overlaying it all with soaring, near-operatic vocals and pop hooks. It’s an expansive widescreen record, particularly for one that lands only around half an hour in length. When I spoke with N Knaza, they tell me about the various friends who appear throughout the record–for Bartees himself, Sadie Dupuis, and Dylan Baldi to name a couple–staying to to their sound, and their work in animation.

What I really like about I Could Get Used to This is that pretty much every song’s got a completely different sound. If you were trying to pitch Spring Silver succinctly, what would you say?

I’m not really sure. I think it still sounds cohesive, all fits together, but I just say it’s post-hardcore. That’s what it sounds like live. Or maybe art rock. If I wanna get into the nitty-gritty I’d say I draw from the array of music I listen to. I say, “queer metal,” but that doesn’t explain how it sounds.

Would you say it’s more “queer metal” in spirit than sound?

I think so–I’m trying to do what I want as a musician, and I think that works in tandem with self-acceptance.

I think it’s definitely a cohesive LP–you don’t get whiplash from track to track. How do you organize and lay out the track list of your records, especially this one?

I try to go by the energy each song has. An aggressive song, or an upbeat one, I like to bunch them together and then punctuate with slower songs. That makes it, I think, a comfortable listen. The track arrangement is the last thing I do. I have to try my best to go with the songs I like and then try to make it reasonable.

The tracks preceded the collaborations, and I kinda looked into how I orchestrated it. If there was someone who’d sound good singing a certain part, I’d hit them up, or if someone could drum a part in a particular way. Honestly, the fact that I could hit up someone I admire really tempted me.

It’s all pandemic to me when I look back–it doesn’t feel that long ago! [laughs]

How long have you been working on this? The Natural World only came out in 2019.

Similar to that, I have song ideas that I’ve been working on for years–between five and ten–and most of the stuff on here is the past three or four. I record a lot of demos on handheld recorders or Logic, and I just develop what I like. “Plead Insanity” was written before the first album came out, I think. If I had my computer I could literally just tell you.

It’s more fun to guess though.

But it’s so interesting to see the time stamps! They go back a long ways. [laughs]

I know that song had a vocal feature from Bartees Strange, and now here you are touring together. How long have you two known each other?

We’ve been in the same circles for a good while. I met him when Aerial View, my old band, played with Stay Inside when he was in it, and we’ve been staying in touch. A bunch of our friends are in both projects. It’s so cool seeing how people you know, their trajectory just takes them up. He’s such a talent.

Has it been tough to you to put together a setlist for this tour that’s both true to what Spring Silver is and will have crossover appeal for fans of Bartees’ stuff?

No! We’re just gonna play what we play! [laughs] I think there’s enough crossover. Actually, I’d like to put some of the more abstract songs in, or the less live band songs, maybe “Fetch” or “Kin.” I think there’s enough crossover, though, especially with Pom Pom Squad. We’re all sorta drawing from ’90s alt stuff. I think Bartees has taken They Hate Change on tour. I think this day and age, with the way people have this omnivorous appetite for music, people are game for anything. I mean, I was at that Baltimore Love Connection tour.

I’m glad you bring that up. It’s been interesting to me to see things like that tour and then people like you and Bartees getting popular. Why do you think there’s such an appetite for genre-defying music these days?

I think because we have so much access to such a wild amount of information. You can see the wave of postmodernism in music–even in visual arts, cinema. Think Everything Everywhere All at Once. I think people are open to taking in music and just appreciating it as a celebration of sound.

How has the reception to the record been?

It’s been good! It’s a very DC reception. I’m getting people who’re interested in Spring Silver from a little bit everywhere, but in DC is the biggest reception. I think it’s because there’s DC touchstones, like some Dischord stuff. Also it’s called Spring Silver. [laughs] That’s fun. It’s a neat thing to have a local appreciation.

Whoever your ideal listener is, what do you want that person to get out of I Could Get Used to This?

Is there anything else you think is important for readers to know?

I went to school for animation, and I finally put out an animated short, and it’s for “Little Prince.” I did all animation and coloring–it took a while, but it’s fun to have that out, finally.

How did you get into animation?

I love animation! I’ve always been a huge fan, and I thought it’d be cool to explore music without turning that into school. I still thought it would be cool to go to school for that–between the two, I’m more of a novice in cinema and animation than music. It was so cool to be around other people with a similar appreciation. It’s one of those things I’m working really hard on.

I Could Get Used to This is out now.