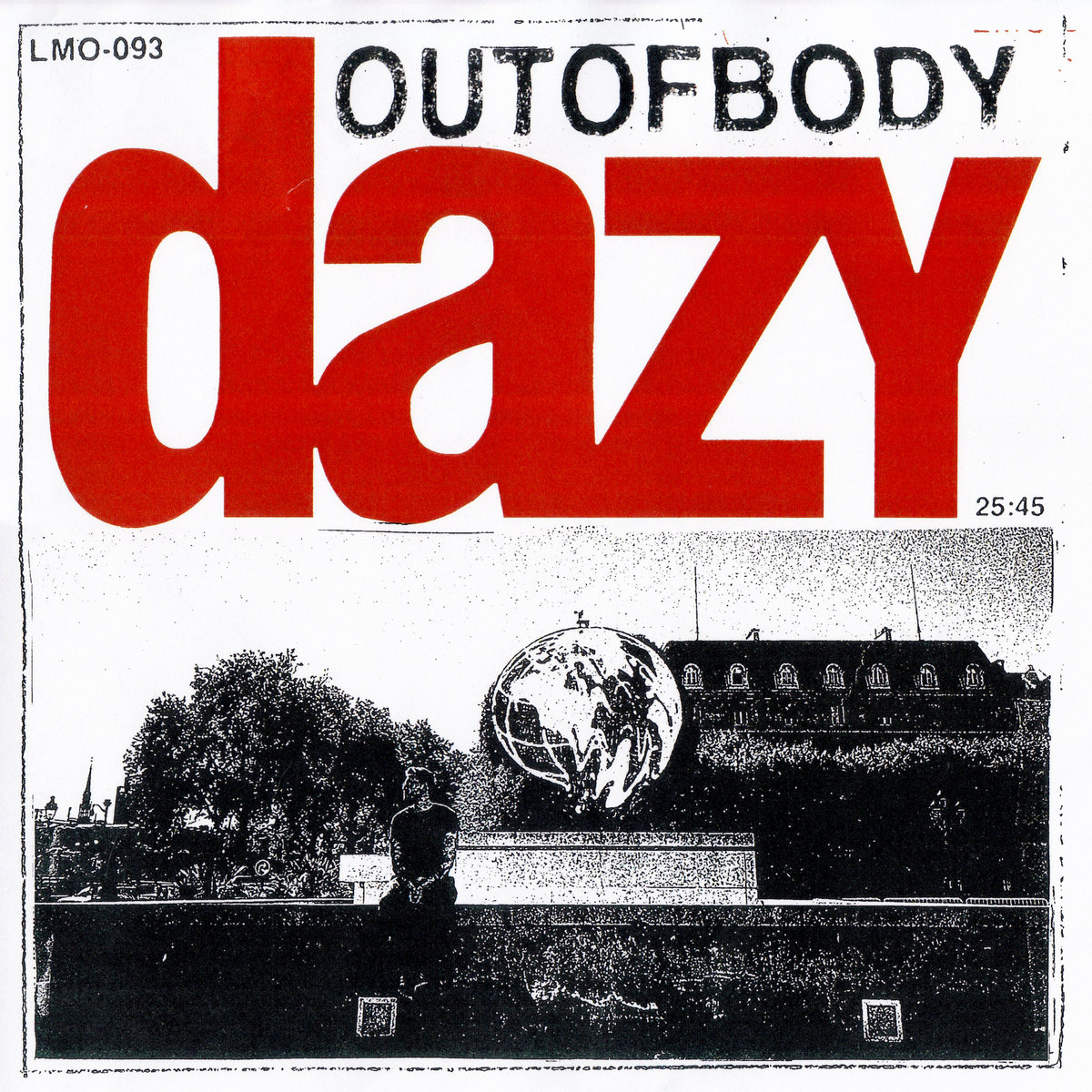 Great music, the kind that rattles around your brain for months after you’ve first heard it, can function in an endless amount of ways—as an escape from whatever has you stressed at any given moment, as a means to look inward and reflect when a certain lyric stops you in your tracks, as a portal to the memories connected with certain songs, or simply as joyful means of shutting off your brain and letting it fill up with the tunes of your favorite band. When asked what he hoped people get out of listening to Dazy, James Goodson’s answer was as direct as his music: “I mostly just hope people listen to it with the volume cranked and it gives them the same rush that I get when I’m listening to something loud and catchy.” The key phrase here might be “the volume cranked,” as Dazy’s fuzzy, infectious rock is certainly meant to be played at a level that will test the limits of your speakers (his previous release is a collection titled MAXIMUMBLASTSUPERLOUD, after all). If there aren’t tchotchkes falling off your shelves, you may need to crank the volume a little more.

Goodson describes the influences on his sound and approach, saying “I was trying to think about what kind of songwriting really sticks with me and feels sort of timeless, and that meant going back to a lot of the music that’s made the biggest impact on me in my life. I think there are certain bands that are almost these musical signposts where they not only got in my head in a big way with their music, but also led me to lots of other musical discoveries. For me, that’s stuff like Nirvana, Green Day, Ramones, The Jesus And Mary Chain, Teenage Fanclub–these bands that make uncomplicated music that you can return to endlessly and it keeps holding up. Those kinds of bands all make amazing music that’s really accessible and easy to love, but the more you dig in the more they point you to even more great music. For instance, Nirvana can introduce you to grunge, or noise rock, or SST Records, or even just ‘90s alternative music in general. Or sometimes those bands even intersect, like The Jesus and Mary Chain clicked for me because they pretty much sound like the Ramones, and then you start to see these shared influences.”

The idea of “uncomplicated music that you can return to endlessly” is maybe the best way to describe Dazy’s sound. There’s no bullshit here, but it’s also not overly simple, as there are just enough layers of guitars and fuzz to create the swirling sound that always seems to push forward with intensity. Dazy’s songs are pure sugar in the best possible way—bitesize tunes that are infectiously catchy and refuse to leave your brain. When MAXIMUMBLASTSUPERLOUD dropped last year, it was like a shift occurred in my mind. I couldn’t walk anywhere in the city without hearing snippets of “Fool In The Mirror,” “See The Bottom,” or “Wind Me Up” replaying on loop in my head. The last few months, those tunes have been replaced by OUTOFBODY songs. The bouncy melody and punchy guitar riffs of “Rollercoaster Ride” work wonderfully together and lines like “now I’m scratching at a lotto ticket that I didn’t buy / come on, lemme see that lucky number / well at least you tried” became seared into my brain, playing on repeat as I walk across a bridge or narrowly avoid getting hit by an angry driver at a crosswalk. The fun-as-hell opening of “Am I Joey? Am I John? Maybe Dee Dee? Maybe Tom?” in “Choose Yr Ramone” is an instant high point and the tune doesn’t let down from there with “roll your eyes and clap your hands / laughing at the cover bands” sticking out as one of the more memorable images on the record.

One of the best examples of Dazy’s immediate and infectious style is “Split,” an absolute rocker that Goodson describes as being “written pretty late in the game, I had definitely recorded most of the album already when I got this idea for this one. It was one of those songs that comes together super quickly so you know it’s a good one. I think pretty much everything on the final recording is from the demo except for the vocals.” You can definitely feel that energy on the recording, as it seems as if the song was rushing to get out of Goodson and onto tape, clocking in at under two minutes in a blistering style.

On that blistering sound so prominent on OUTOFBODY, Goodson said “sonically-speaking, I was also just trying to make music that sounded big while still being a little rough and home-recorded. There are a lot of bands from the ‘80s and ‘90s that brought a bit of that off-kilter punk approach to making poppy rock music, and those are always top of mind for me–The Breeders, Guided By Voices, a lot of Sarah Records and Creation Records stuff.”

This clash of “sounding big while still being a little rough” hits its peak on “ACTCMM?” a song that feels like the epitome of the current buzzing through Dazy’s songs, with a huge riff built off the combination of two grimy guitars. Goodson described the tune, saying “a lot of time when I’m writing a song I have a tendency to sort of counter a really sugary melody with some really ugly guitars. That’s why this song has just crazy feedback happening throughout the verses, I just love it when straight up noise is colliding with some pleasant melody.”

OUTOFBODY is not all huge and fast, though, and like on MAXIMUMBLASTSUPERLOUD, Goodson sprinkles in a few songs that manage to pull things back a bit without killing the incessant forward motion of the record. Coming in between the massive “Deadline” and “Choose Yr Ramone,” “Motionless Parade” fits this bill. A little slower and dreamier, the song is still drowning in fuzz, but the tempo draws more attention to Goodson’s vocals. He described the song, saying “I sound like a broken record sometimes because I’m constantly talking about how much I love loud guitar music, but I wanted this record to at least nod to other sounds that I want to dig into. I really like this song because it feels like a respite from all the noisy stuff but I think it still fits right in songwriting-wise.” Dropped at the halfway point, the song does feel like a bit of a breather, but in the way that makes you stop and focus, making it one of the tracks that sticks out the most, even if only for its contrast to the surrounding tunes.

As MAXIMUMBLASTSUPERLOUD was a collection of tracks from various releases, OUTOFBODY is Dazy’s first full-length. On the mindset of putting together a larger collection of songs, Goodson said, “I definitely had to wrap my head around it a little more. I’d only ever made singles and EPs, and had been enjoying recording and releasing them pretty quickly, so it was a bit of a shift to start thinking of putting together something that was a little more cohesive. It’s hard to put my finger on, but a lot of my favorite records have some structure or feeling that makes them seem like more than just a collection of songs. So a lot of the process–choosing from songs I’d already written, writing more songs, recording the entire time–was me sort of stumbling around in the dark trying to trip over that specific feeling I was looking for.”

That thought process manifests itself in the track sequence, with “Motionless Parade” serving as a midway marker and the wryly titled acoustic “Inside Voice” seeming to signal that we’re moments away from the finale, as well as giving a moment of calm after “Asking Price,” which features one of the biggest choruses on OUTOFBODY. Goodson describes “Asking Price” as “one of my favorite songs on the record. I got pretty in the weeds with the sequencing of the album but this was one that I always knew would be pretty near the end. I just think it sounds climactic and exciting even though it’s sort of a frustrated song lyrically.”

Album closer “Gone” takes its time more than the majority of the songs that precede it, with Goodson leaning into the melody a little more and everything feeling grand and bombastic. Pushing past three-and-a-half minutes, it’s the longest Dazy song to date. The track also feels a little more expansive than anything we’ve heard yet from Dazy, working as an emphatic closer that caps out the record while also making you want to immediately flip it over and hit play on side one again.

OUTOFBODY is available on vinyl through Lame-O Records and cassette through Convulse Records.