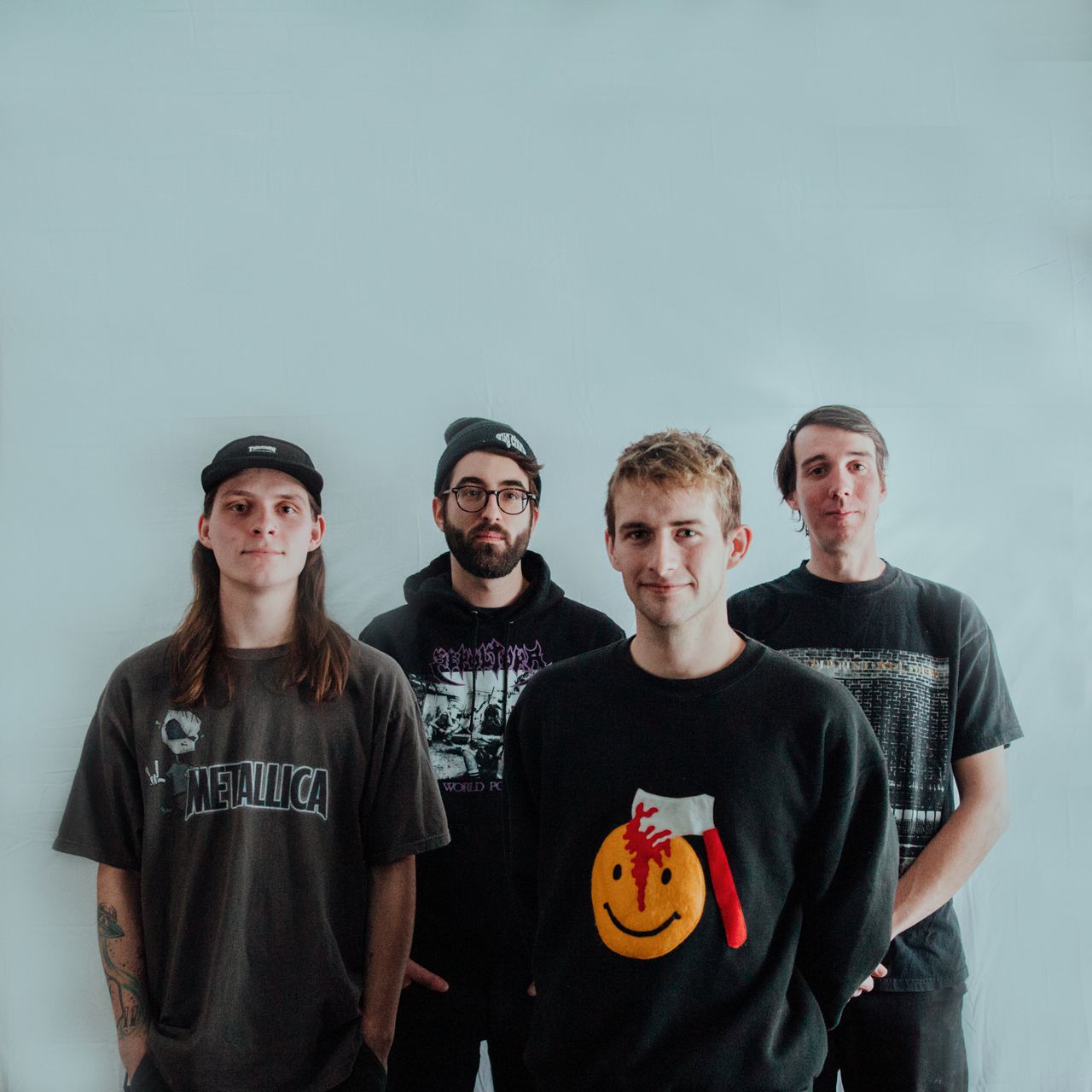 Heart Attack Man is many things: a band, a brand, a shitposter account, an athletic department, a cutting edge knife seller, and a regular guy. As the original founder and creative generator behind the band, Eric Egan fronts the music and represents the social accounts. I spoke with him ahead of their current tour with Neck Deep and before the release of their new EP, Thoughtz & Prayerz.

We talked about the heavier sound of this release compared to 2019’s Fake Blood. It seems that hardcore is much more of an inspiration to Egan based on his other projects (Highway Sniper, ERASE THEM) so it’s interesting to see that influence bleed through more with each subsequent release. He told me about the evolution of H.A.M.’s music and how he decided when to lean on pop punk tones over a more traditional hardcore sound.

Egan says he “grew up on the hardcore scene. My first DIY shows I went to when I got my license were all hardcore gigs. Tougher, heavier stuff did well in cleveland and I liked that style, but I always played more melodic hardcore. My music in high school was very in that vein, but I got kinda burnt out on it (sustained some head injuries too!). The scene I was in was very secluded and insular; it was special to grow up in that, but at times I noticed myself slipping into a very pessimistic mentality. It reached a point where I didn’t want to be like that– and not that I’m blaming hardcore– but being inundated in nihilism gave me a way to fall too far into negativity.

“H.A.M. started with me doing my own thing; starting something new for me, both musically and personally. I wanted to try something more chill than what I’d been used to. I wanted hard but catchy songs that didn’t make people want to beat the shit out of each other. I always have and still do like aggressive music, but in the beginning I wanted to perform something different. As time went on, I wanted to channel more of that influence starting with Fake Blood. With Thoughtz & Prayerz, I feel like I can enjoy heavy music without the negative perspective. The EP is really about recognizing what works for us with songwriting while experimenting with darker stuff.”

The new EP is clearly steeped in some darker stuff – and not just musically. There’s definitely an edge to T&P that people have come to expect from a Heart Attack Man product, but lyrically and thematically the EP is as blunt as ever. With its macabre plot, the preceding single, “Old Enough 2 Die,” was a foray into the current state of the project. Now, the seeming spiritual successor “Cool 2 Me” has thrown away the subtlety of the single and given the message straight.

Anyone familiar with Heart Attack Man’s music is probably also familiar with their Twitter presence. Egan is not one to shy away from controversial topics. With “Cool 2 Me,” we’re getting a really straightforward sense of how Egan views the industry amongst the countless allegations of abuse, misconduct, and grooming. He shares that, “It’s kind of an uncomfortable listen, obviously. I proposed it to the band as a demo – like, ‘Hey, kind of a lot but let me know what you think. I feel passionately about this and I feel like it needs to be talked about.’ I’ve run into this mindset a lot of times and the first thing I hear someone say in defense of their abusive friend is ‘Oh, they’ve always been cool to me.’ That idea is this terrible mentality that needs to be addressed and dismantled. There’s a misconception that your individualized experience with someone means they can do no wrong. Just because someone is nice doesn’t mean they can’t hurt people. Whether we admit it or not, we’re all capable of doing horrendous things; we just choose not to because we’re better people than that. The ‘cool to me’ response is very ignorant. These situations aren’t about you.”

On the surface, writing a song about abuse allegations and saying, “this isn’t about you” is skeptical, but Egan’s tone is very serious during this part of the conversation. He doesn’t use the opportunity to dive into the liner notes or metacommentary of the song, but rather offers a direct insight to the way the community has been responding to these acts. He goes on to say, “I’ve yet to hear a song take that discussion on, and this song really stems from these exhausting conversations about how people can’t believe allegations just because they haven’t experienced it, or like it discredits the abuse. I think there will be people who don’t appreciate how brutally honest the song is, but it might put it out there for someone to realize that being nice doesn’t equal inculpability.”

Over the last few years, Heart Attack Man has seemingly become more brand than band. Egan has taken plenty of merchandising opportunities along the way, most notably the various palette of beanies and selection of H.A.M. knives. Recently, they’ve even begun an exercise group (The Heart Attack Man Evil Athletic Department). With the following the band has, Egan could tweet a running gag 2 or 3 times and within a week, half of their followers would take off with it (see “Good morning everyone it’s me ____ from Heart Attack Man”).

I asked him how he regards the development of the Heart Attack Man project and brand from strictly music to something so all-encompassing. He laughed thinking about it, then said, “Honestly, I try not to think about it too much and just kinda roll with it. Month by month, year by year, I’m flying by the seat of my pants and having fun along the ride. I feel like if I think beyond that surface reason, the energy that people recognize from me as Heart Attack Man is maybe just something that people easily pick up on and feel a part of. Obviously not everything we do is improvisational – we plan some things, but so much of the world is this carefully thought out marketing plan that’s force-feeding people products. I want to put out our energy and just gather the people that were always going to want to be a part of it. I’d love to get out there and do big things, take it as far as I can, but when it comes to our band I feel like we just do our thing and organically attract people who are in the same place.

“I do my best when I have freedom to be myself and our team recognizes that that’s the strength of our ‘marketing.’ I’m just having fun on the internet. It’s not targeted, it’s not marketing genius, it’s just me. I’ve had a lot of people over the years who are like ‘This is marketing genius. How do you do it?’ as if I could replicate it for someone else. I don’t fucking know, but I’m the wrong person to ask when it comes to knowing what I’m doing.”

The way that Heart Attack Man reaches people is varied, but the audience it draws is always of a like mind and seems to support one another. People are connecting from across distances over a collection of beanies and calling each other “worsties” or “Baby Carrot Gang.” The mystery surrounding Eric especially is known to be a uniting factor among fans. My first introduction to the Heart Attack Man personality was him pretending to be a doctor giving a patient news that his new album – Fake Blood – was “sick. It’s so sick.” It occurred to me that people who knew of the Twitter mystery may have no idea about this guy’s actual work; they might have no idea that Heart Attack Man is actually a band. I asked him how he felt about this idea, to which he replied candidly, “It doesn’t bother me if people recognize me from Twitter over the actual band. It all feeds back into the band most of the time, anyway. Besides, anyone who was going to resonate with the music is going to find it somehow whether it’s through some playlist or through Twitter. I’m happy where we’re at. I’m enjoying every step of the way, and if there’s people who don’t care about our band but think we’re funny on the internet, then I’m grateful for them, too. I’m more focused on the people who actually do enjoy our music, but it’s everyone involved that gives us the opportunity to do any of the things that we get to do.”

On the subject of big things the band is doing, besides releasing Thoughtz & Prayerz through Triple Crown Records, they are currently on a full U.S. tour with Neck Deep, Boston Manor, Zero 9:36, and Oxymorrons. I asked how the newer Heart Attack Man songs fit into this varied roster headed by one of the most prevalent pop punk groups of the last decade. Egan was optimistic, saying, “The way I look at it, there are definitely times when we tour in the pop punk world that we end up being the most aggressive thing some of these kids have heard. We’re kind of like a gateway band, right? People will tell us that hearing Heart Attack Man got them into more serious hardcore stuff. There will for sure be people who won’t fuck with us and that’s normal, but if anyone out there recognizes the pop-punk sensibilities in our sound, I think they’ll be as excited as I am to play with Neck Deep. I think there’s more for these fans in listening to us than there isn’t.”

Check out the new EP and extensive merch collection on the Heart Attack Man website, and get out to a gig on this tour if you’re feeling up to it!