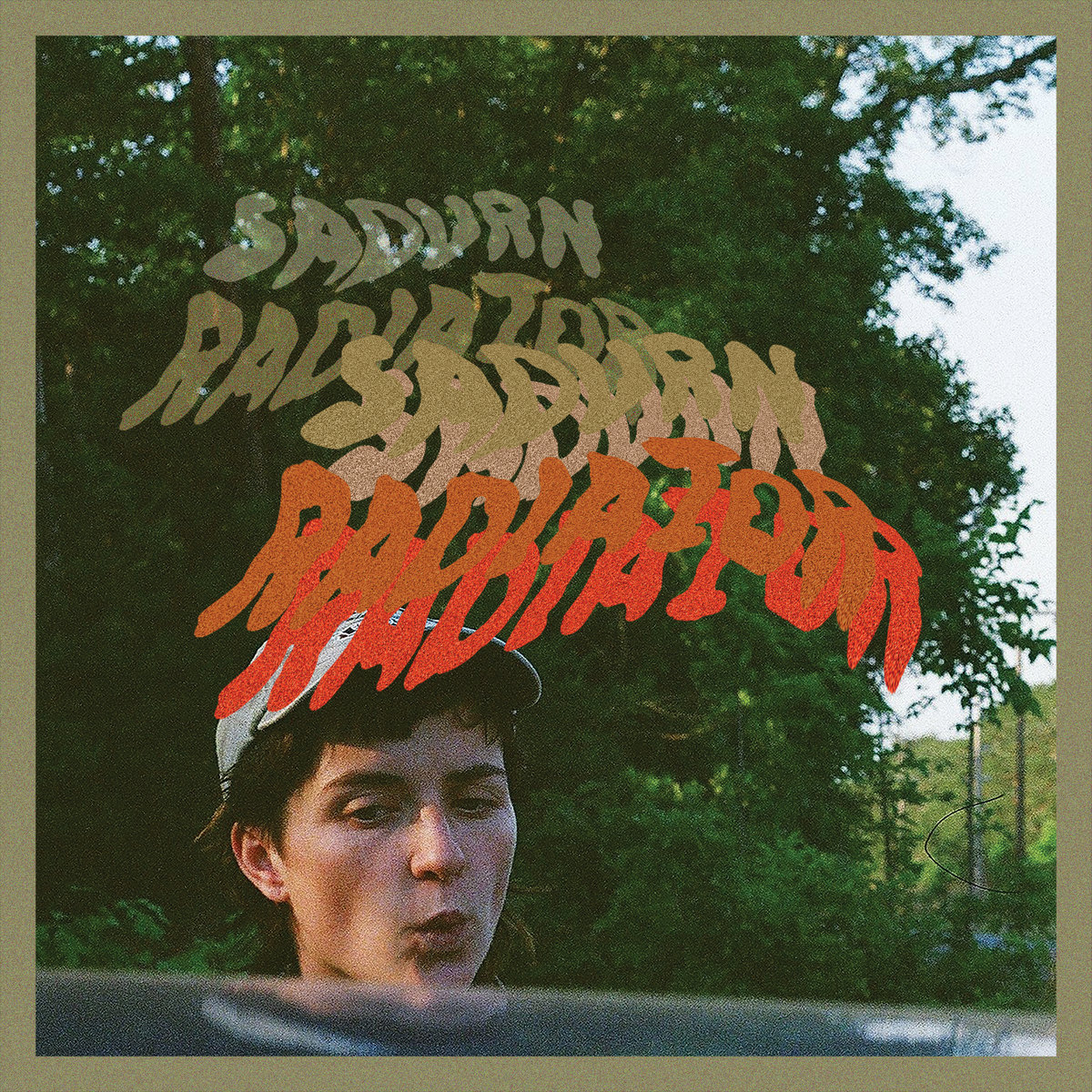 There is an almost offhand and casual beauty to the songs on Sadurn’s Radiator—a collection of tunes that fall between folk and emo in style with some gorgeous guitar and vocals recorded to sound as if you’re sitting in a cabin with the band, listening to them put the tracks to tape, as you can hear their fingers scraping as they strum the nylon string guitars and the glass slide drag across the strings in such a vivid way. That intimate setting is reflected in the effortless emotional depth of the record, with lyrical phrases and images packing a strong, self-reflective punch plopped in amongst mundane recollections of picking up friends at Rite Aid or continually falling to fix a slow leak in your tires because of how worn-down work gets you every day. The songs on Radiator are definitely “sad” songs, but they’re not overly morose or weighed down in melancholy. In a way that group’s name is indicative of the feel of the songs; yes, they’re sad, but the band is also having fun with them.

As the group’s first full-length, the process for Radiator was slightly different for the Philly band. “Well the EP was just Jon and I recording on a USB mic on Garageband, and the split we recorded with heather (from Ther, who also engineered the record) in her basement,” vocalist/guitarist Genevieve DeGroot says. “The new record was the first time we recorded anything as a full band, and the first time the recordings weren’t just one track live takes. So it was fundamentally pretty different, although there was something special about those earlier recordings that we tried to keep around in the process. I should also mention that we were living together for two weeks in order to arrange and record the songs, which I think had a big effect on how the record sounds.”

On the recording of Radiator, drummer Amelia Swain added “while recording at the cabin, I felt so inspired by my friends. I had never really played drums before, like barely at all, and my experience of recording Radiator felt so vulnerable. I couldn’t tell if my drumming was ruining the songs or what. I felt like such a beginner. But everyone at the cabin was really encouraging to me, saying my drumming was the perfect fit, and that I was irreplaceable. That meant a lot. And now I feel really proud of the record, because I think I kinda trustfalled and played my heart out. There’s no way I could have done that without my friends.”

That connection and intimacy between the band is certainly reflected on the record, which never loses its warm, comforting feel throughout, even as the lyrics aren’t quite as cozy and comfortable as the folky sound that touches on familiar ideas while still feeling original and unique to the band. Album opener “snake” also reflects the different process from the band’s previous work with the drums and electric guitars making their presence known under DeGroot’s pulled-from-life lyrics like “maybe it was wrong to meet you out in State College / as if we were still together, like I was your only option / but I’m not – and you know that I’m not as true as I thought / but I’d still drive for several hours on a dime if you dropped it.” As the first single, it works as a great intro to the slightly more expansive sound the group is working with on Radiator and also comes with an appropriately chill video that apparently wasn’t without disaster, as Swain says “for the ‘snake’ music video, I actually burned my hand really badly before we started filming. I could barely hold the drum sticks, and in between takes I had to put my fingers in the minifridge’s icy freezer. It was still fun though!”

Following “snake,” the record takes a wonderful detour with “moses kill,” easily the most sparse and raw tune on the record, and one of the more immediately stunning. Its placement on the album almost throws you off at first, as the “quiet acoustic” song generally falls on the back half of an album to give listeners a breather after a bigger, more climactic song. Placed after “snake” at the top of the record it both gives you pause (as know you’re not sure what the rest of the album will sound like) and draws you in with DeGroot’s equally evocative guitar playing and lyrics, with lines like “I’m a stream off a stream off a great river delta / running from the Hudson where you grew up / and I will always circle back to my beginnings / and heed that dark demanding blood” that are sure to echo in your head long after listening. On the track, DeGroot says “the recording of ‘moses kill’ is just a single live take of me and Jon, minus the ‘oo’s at the end. I was cringing pretty hard about my vocals on it originally but at this point I’m really glad we have something so raw in there, it feels special to me. I think I want to do all my vocals live on the next record.”

“golden arm” and “lunch” bring back more electric instrumentation, but keep the pace slow and deliberate, creating an airy, transient feel as the songs seem to float on steadily underneath lines like “I watched a whole forest grow from seeds / before you got up / the silence always shakes me from my sleep / and I can’t get it off.” They’re followed by “special power,” an explosive emotional centerpiece for the record that starts with a delicate fingerpicked pattern before the opening lines of “I’m trying to distract myself / cuz I’m tired of crying my eyes out / over you / and over nothing.” After a more distorted section, the band pulls back for the lines “I light a candle in the shower / try to tap into my special power / I end up on my knees / with the water all around me / so it’s okay what I’m feeling / It’s alright if I’m crying / maybe there’s some good coming / although I cannot find it,” followed by a slow instrumental build and one of the heavier moments on the record.

Guitarist Jon Cox said about the track, “we hit a slight rut while recording ‘special power’ and spent a while trying to figure out what the song needed. We all took turns playing guitar on it in our own ways/styles. Turns out it needed to be 15% more emo. So Amelia added a part in one of the later verses and Heather, our engineer added a distorted emo guitar part at the end. That recording is the only moment as a band where we have more guitar players than a southern rock band.” His southern rock comment brings up one of the more interesting aspects of Radiator: the sheer number of different guitar sounds on the record. Given the style of the music and the delicate, reserved sound of the abum, you may miss that most songs don’t just layer guitars, but utilize a slew of different types of guitars with nylon-string guitars, acoustic slide, grimy electric, reverb-dripped electrics, and standard folky acoustic all showing up and melding together wonderfully to create the album’s interlaced sound. The ending of “special power” is a good example, as is the last half-minute of the title track, which goes out with at least three different acoustics, including a simple, but gorgeous, melody from the slide.

On the inspiration for these different sounds, DeGroot said “I think we always say this because it’s true, but Gillian Welch/David Rawlings were a big inspiration on several of the songs, both in writing them and in the arrangements. I know Jon came up with the acoustic slide parts on Radiator after listening to some of their stuff. I also remember sending Heather (our engineer) the album Cerulean Salt by Waxahatchee as a reference, because I loved how it has a super raw sound and a range of dynamics that all feel very in keeping with the songwriting.”

Cox echoed their sentiments, adding “as G said, definitely Gillian Welch/David Rawling’s guitar playing. They have a way of intermeshing their guitars/playing into what sounds like a singular moving thing. I’ve always liked that sound. I had played slide guitar before but never in the open E tuning. I was also thinking about my grandma and how much she loved CCR and bands like that so I started screwing around on the porch and came up with a part with those things in mind.”

Those influences can be felt on tracks like “the void / Madison,” which builds off a somewhat rawer fingerpicked electric guitar, and the airy “white shirt,” one of the more intimate moments on the record, kept light by a delicate lead guitar line and lyrics like “a slow night at the cafe / I know what you were gonna say / you linger and disappear / I’ve got all night to think about it here / and I found you smoking in the park / you had no idea how you dragged me through the dark.”

Sadurn save their most surprising track for the end of the record, with “icepick” followed by the instrumental outro. A meditative and catchy tune, “icepick” chugs along with a circular rhythm underneath some of DeGroot’s stronger lyrics on Radiator, with lines like “but I can’t reassure you if I don’t believe it / I know there’s some distance, but I was gonna ride it” and “your mind is like a fishnet, and mine is like an icepick / sometimes it really works and sometimes it leaves us hanging / and I get so frustrated about your communication / but I know you can’t help it – I’m not really tryna change ya” particularly standing out.

In addition to what should be a killer release show with The Afterglows and Shannen Moser at Johnny Brenda’s in Philly on May 12, DeGroot says “we’ll be doing some weekenders in June all within a couple hours of Philly, but we’re also hoping to get added to other artist’s tours as support. Just saying to all the big cool bands out there. We are highly eligible to be your support. You want us as support. You will ask us to go on your big tour.” On their plans to tour behind Radiator, Swain adds “my mom is a huge Sadurn fan, and she really wants us to play in Minnesota where she lives. I’m always like, ‘hopefully soon!’ But yeah, I can’t wait to tour everywhere!”

When asked what they hope people get from spinning Radiator, the band wants to leave that to listeners to experience on their own, although DeGroot made note to mention “but I will say that listening to music and writing songs are important for me personally in processing stuff and opening doors in my brain so if it is helpful to other people in that way, that would be really rewarding.” While Swain added, “there are a lot of comments on our music videos of people saying the songs made them cry. So that’s awesome, I love crying.”

Radiator is out on Run For Cover Records Friday, May 6.