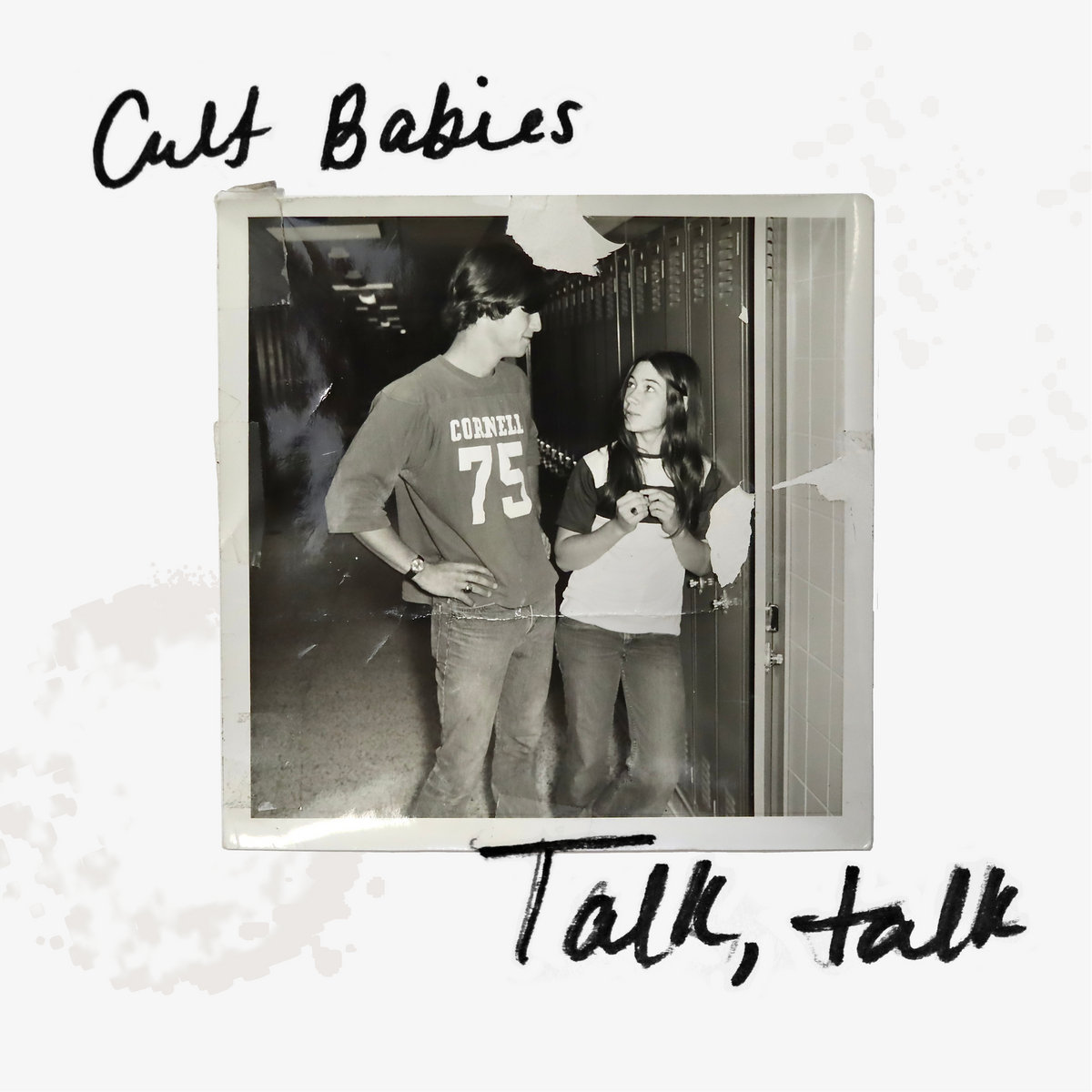 “Relapse in D,” the first track off Cult Babies’ Talk, talk, opens with the straightforward message “I will let you down / I’m your favorite band that’s changing their sound” over a delicate harmonic pattern on the acoustic topped with some subtle slide guitar floating above. As the drums and bass kick in, the lyrics reveal a bit more with the lines “join a 12-step program / find a higher power / get a bourgeois haircut / finally learn the drums / setting boundaries with the family / stop taking the phone calls / mix the meds they gave you / with coffee cups and scheduled hour talks” and the tune shifts to a breezy seventies vibe that stretches across the rest of the songs here.

Talk, talk is the first record from Cult Babies, the solo project from Collin Reynolds from the Albany rock collective Coupons (who also have a killer record lined up for the end of July). Reynolds described the album as “deeply personal,” saying “the songs are mostly about my niece who’s now in her early 20s. We were both born into an extremist religious environment. The church was all encompassing growing up. For example, I was homeschooled until 8th grade. She was homeschooled all the way through. Long story short, she suffered a tremendous amount of trauma growing up. The details are gory, unthinkable, and unnecessary to appreciate the record for what it is. She left the house when she was 18 and has in some ways been exiled by her family. I had to leave med school a couple years ago to help her get into inpatient psychiatric treatment. We also ended up going to the police for accountability. It was traumatic for her, myself, and my family. The ripple effect has been profound. My drinking really spiraled out of control in the wake of it. I’m 4 months sober now. The songs are an exploration of this time period, my youth, and the church. Sometimes there are purposeful vagaries to cloud the details of the situation. ”

The idea of religious trauma leading to addictive behavior comes bubbling up to the surface in the swirling coda of “Relapse in D,” as Reynolds switches to a light falsetto to deliver the final admission “there is whiskey in the thermos / worship in the basement / we are swinging with the devil / god knows nothing’s sacred / I am standing at the altar / blood up to my ankles / and you’re kneeling by the river / hoping someone saves you / but I can’t.”

While the lyrical themes are clearly heavy, Reynolds does not let the music dwell in the depths too much, wrapping his narrative up mainly in folky 70s acoustic vibes with nice touches from the slide guitar and keys, creating a sunny, comforting feeling to the record. On that sound, Reynolds said, “I wanted it to feel organic and warm. I think we accomplished that by doing it analog. There are some vocal mistakes left in the mix to give it a sort of demo feel. I think those imperfections really fit with the aesthetic and story-telling of the record.” On the technical aspects of the album, he added, “the record was engineered by Rick Spataro. The first 5 songs were done all to tape, like reel to reel, and in full takes. Rick played drums, bass, and electric guitar. My friend and bandmate Dan LaFave played keys on a couple songs. It was mixed by Nicholas ‘Scoops’ DaDaris, who also produces and mixes the Coupons records. Nicholas Sebastiano from Another Michael mastered it.”

That organic and warm feel Reynolds mentions manifests itself beautifully on “Washed,” which Reynolds calls a “James Tayler type song,” adding “the lyrics to this one are blunt and autobiographical. It didn’t feel necessary to couch it in metaphor.” The track starts with a twangy slide under an enticing acoustic pattern jumping between a couple chords. Reynolds paints the scene for the listener write away with a line that would sound as light and breezy as the music at first if you didn’t listen too closely, as “driving up 85 / tallboy at my side / Pennsylvania flying by,” is followed by “I’m a stranger, you’re a broken tape / of phone calls keeping me awake / a promise made / I’d get there by the time you went insane / heavenly father, is nobody listening now?”

Things come more into focus even as the narrator’s vision blurs with the verse of “get chest pain when I think / pseudoseizure coffee drink between my trembling knees / now I gotta check you in / psych ward’s filled / I bite my tongue / each time I hear your mama’s name I nearly chewed it off.” It leads into a chorus of contradiction, as Reynolds sings “yeah we drink your pain / it runs like a River all down your face / washed in the blood of Christ / raped and abandoned / hung out to dry” over a melody and instrumentals that are almost celebratory, creating a contrast with the darkness of the lyrics. Bookended by some slick Allman Brothers-like guitar solos, the final verse of “think back when I was young / brainwashed speaking out in tongues with oil on my head / I feel it cuz it’s you and me / history and entropy repeat it back / no one else can love you like you can / this is a phase child / just don’t believe your mind” works as an early realization of the record’s themes.

It’s followed by “Neil Young,” a haunting, late-night drive track with lines like “you can’t trust a drunkard / and you can’t count on me / double life, there on monday and dead by the end of the week.” The eerie, foggy feel is appropriate as the song marks a turning point on the record where the underbelly of the religious imagery is introduced as Reynolds sings “son I see the devil / yeah, every time I blink I now / needle and the bevel / yeah, take my blood and drink down” hinting at themes that will pop up on side B with “NYC Circa 1976” and “Satanic Panic.” Although the track is named for Neil Young, it’s The Doors that come more to mind as the tune fades out on an extended jam featuring LaFave on the keys.

With its jazzy guitar accented by muted chucks and smooth 70s keys, “Red Wine / Diazepam” feels like the centerpiece of the record, and Reynolds refers to it as “a sort of love letter and notice of resignation to my niece.” The tune opens with the lines “waking up buzzing with bees in my head / take a sip of wine with diazepam / keep a cool composure in the hotel lobby / a continental stay/ think I’ll drink the day away / forget about your tragedy / oh love, truth is on your side / but god might’ve lost his mind” as the instrumentals seem to meander on in a loose, lackadaisical way that matches the lyrical ideas. Reynolds’ lyrics are a strong point of the record as a whole, but they seem particularly sharp on “Red Wine / Diazepam” with “cheap shot stomach drop, kick in the face / write a different story, maybe take a mental health day / a life worth living is on its way / hit the road and drink up whatever soothes the pain / blow it up like John McClain” and “you got ‘em on the ropes again / you can always shout and tag me in / rest stop wisdom often gets it right / fuck em they don’t know your plight / Wahlgreen rhythm keeps it rolled up tight / oxycontin lullaby” standing out as lines that reach out and stop you in your tracks.

“NYC Circa 1976” is equally lyrically gripping, kicking off with the lines “they better get an exorcist / you’re talking backwards making sense of tea leaves / pentagrams and Latin verse / hanging with the dead on friday night / it was a sacrilegious celebration / pitch black magic incarnations / I think I need a coffin or a holiday / somewhere quiet where I can lay my head” overtop an open, folky acoustic guitar. It’s followed by an eerie chorus of “steady as she goes / shaking off the demons that still occupy her home” accented by a tremolo-heavy electric guitar and some spooky keys. On the origins of the tune, Reynolds said “I watched a documentary on the Son of Sam around the time I wrote this. The imagery of crime in NY and paranoia surrounding satanism and cultish activity seemed to fit the general psychic experience we were feeling.” That paranoia can be felt intensely in the song’s chilling bridge, as well as the final lines of “catch me I’m falling from grace / there’s mud and there’s spit in your face / don’t tell me forgiveness is key / I’ll murder you all in your sleep” delivered over sparsely-picked acoustic chords.

The tune forms a natural pair with the slick, jazzy “Satanic Panic,” kicking off with the lines “talk, you’ve been clutching your pearls for days / craning your neck to see the 666 on the back of my skull / and the crooked crucifix hangs by your door / wards off the coming war / we’re hungry for your children and we’re coming for your morals / nuclear family exploding without warning.” Building its sound off an electronic drumbeat accented by some hand percussion, the track allows for some nasty lead lines from the acoustic guitar, while also feeling a bit sonically different from the rest of the record with how much it embraces a bouncy jazz feel.

With the droning instrumentals reminiscent of a church organ behind the deliberately plucked guitar, album closer “Beyond the Pale” feels appropriately prayer-like and devotional. Lyrically, the tune deals with point in a situation where you just have to take stock of what you have and simply walk away, as the advice of “chin up, go on, get some other air to breathe / or find something that sets you free / this prison’s not a family / and god is not this suffering / so please” leads into the final pass of “count me out / no jurisdiction don’t break down / you can go the distance / I never wanna see you around,” with the record coming to its end as Reynolds utters the final words.

While Talk, talk is clearly a deeply personal project, there is still a feeling of ubiquity to these songs, especially for anyone who grew up in the church (to whatever degree or in whatever way) and have since moved on as adults. The record is packed with lyrics that may not get your attention until the fourth or fifth listen—as the music is so warm and comforting—but will be bouncing around your head for weeks once you hear them. As a final note, Reynolds addressed the nature of making a record that is both so personal, but also something other people will hopefully listen to and enjoy, saying “the word catharsis gets tossed around a lot in songwriting. This record is exactly that. It was therapeutic for me to get it out. I think people can still enjoy it though. There are moments of optimism and encouragement. I hope people can take away a positive message of recovery from trauma, or at the very least, feel less alone.”