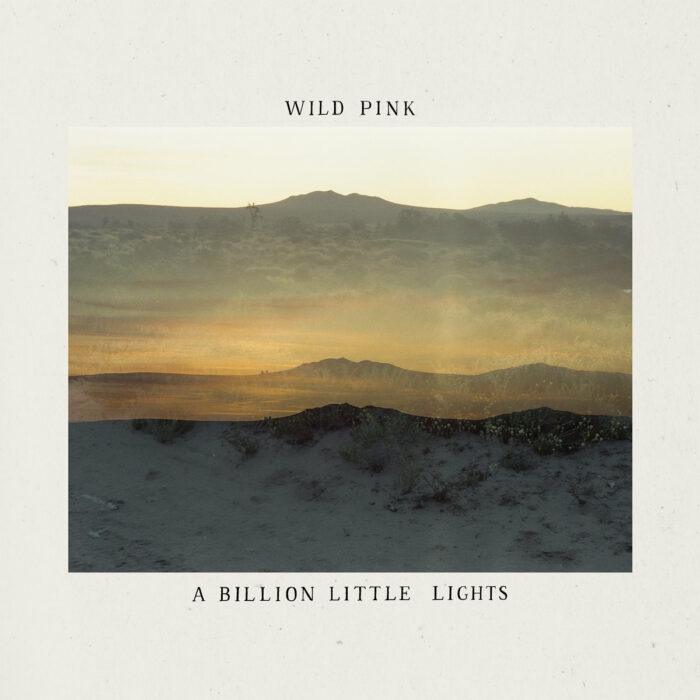 Wild Pink’s last full-length was a masterpiece. Following their delightful self-titled debut, a minimalist, no-frills indie rock record in the vein of Pedro the Lion and early Death Cab, the band blew up their sound entirely. Incorporating influences from Americana, heartland rock, and dream pop, Yolk in the Fur felt like an expansion of the world of Wild Pink; songs sprawled and stretched in unexpected directions, ending in completely different places from where they began. Even if it doesn’t hit quite the same heights as its predecessor, the band’s third LP A Billion Little Lights is another evolution of Wild Pink’s sound, doubling down on the Americana and country influences that were present on Yolk in the Fur.

Knowing that frontman John Ross had planned to follow up that record with a double album about the settling of the American West certainly informs an understanding of A Billion Little Lights. Even though that idea was scrapped, the pastoral country music that defined the region bled into the finished record; fiddle crops up now and again and steel guitar is a fixture (and, yes, an accordion makes a surprise appearance). But the band isn’t fully committed to the sounds of the past – synths still wash over nearly every song, the band toys with electronic beats, and Ross experiments with autotune at points; A Billion Little Lights almost feels retro-futuristic in that way, marrying the sounds of modern pop with old-fashioned country.

In retrospect, the Yolk in the Fur singles “Lake Erie” and “There Is a Ledger” were tastes of what to expect on this album. The former was the band’s “One Headlight,” a transformative rock and roll song colored with pedal steel; on the latter, an overblown, almost alien sounding synth interlude broke up its hazy melodic reverie, and it somehow fit perfectly. If the band spliced the two together, the result would be something similar to the general feel of A Billion Little Lights, and “The Shining But Tropical” demonstrates this well as the lead single. Sparkling synths and autotune are juxtaposed with strings and pedal steel – Ross said the song was inspired by both Townes Van Zandt and Carl Sagan’s Cosmos, and this comes through clear as day. The song’s hook, the declaration that “You wanted peace / you wanted love / you deserve that much,” is immediately followed by the sound of synths cutting in and out, almost as though the song is trying to restart itself; when Ross’ vocals come back in, they’re sandwiched between pitch correction and harmonies from Ratboys’ Julia Steiner. The song does rebuild itself from there, gradually swelling back into its chorus.

The thread laid down in “The Shining But Tropical” is picked up at once by “Amalfi,” which draws the contrast even more clearly; when Ross’ vocals first drip into the song, they echo and lag over a soft, dreamy riff that would’ve fit on Yolk in the Fur. Midway through, though, “Amalfi” becomes something entirely else, slowing down as if caught in zero gravity, giving way to booming drums and near-robotic modulation of Ross’ voice. It’s a far cry from the rustic, breezy song that it begins (and ends) as, but Wild Pink’s confidence pays off and the space rock detour feels entirely organic.

Other songs are subtler in their experiment-ality: the saxophone-laden bridge in “Pacific City” is unexpected, giving the already gorgeous song a unique flavor in Wild Pink’s catalog. Horns make an earlier appearance in the fully instrumental latter half of the lush “Oversharers Anonymous,” an Americana song so stuffed with strings, pedal steel, and synths they’re easy to miss. But even the songs that don’t push against genre conventions are no less impressive; contrarily, “Family Friends” and album ender “Die Outside,” two of the album’s more straightforward cuts, both demonstrate the band’s complete mastery of their craft. The former is beautiful and tender, with a guitar break to give the song some life and a duet with Steiner to close out the song. The latter is the most driving rock song on the album with a triumphant riff and the album’s most immediately gripping hook. A Billion Little Lights certainly closes out on a high note with “Die Outside,” a reminder that, for all the space on the album, Wild Pink is still a heartland rock band.

Part of what made Yolk in the Fur so mesmerizing was the novelty of it, the way it completely shattered expectations of the sort of band Wild Pink could be. Because A Billion Little Lights has the unenviable task of following that record, it comes as less surprising. But what this record proves is that Yolk in the Fur wasn’t a fluke – Wild Pink is one of rock and roll’s most talented, most daring, and most exciting bands. Perhaps it’s less of a shock, but it’s no less an achievement.