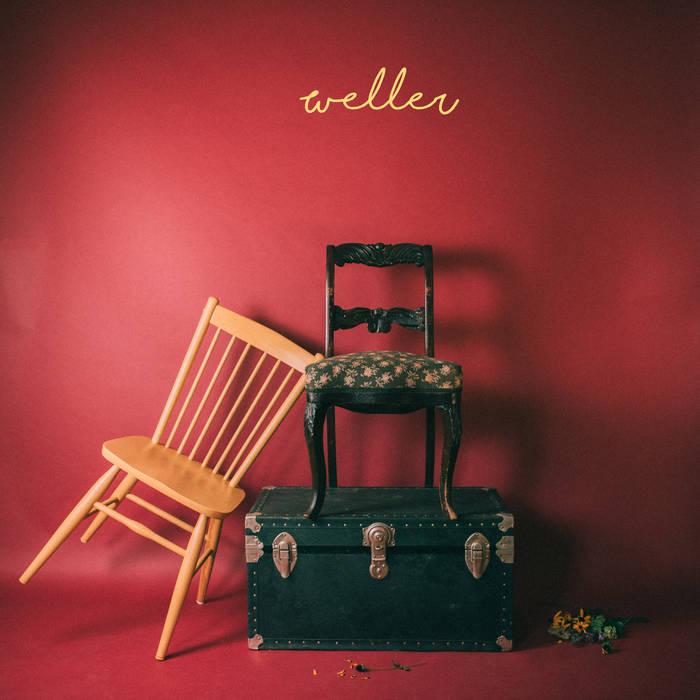 After seeing success at the heels of their “Career Fair” EP’s release in April 2016, Philly indie rockers, Weller, made a name for themselves across the U.S. with DIY-style touring and a split record with Rue.

A year and a half later, on October 20, Weller released their debut full-length LP, about one month into their U.S. tour with Kississippi and Three Man Cannon. The self-titled record is 23 minutes of pure head-bobbing fun and proves that the trio, made up of Harrison Nantz, Evan Clark Moorehead, and Jeremy Berkin, aren’t just better than they were a year ago — they’re weller.

The band has a knack for pairing melancholic and nostalgic lyrics with buoyant instrumentals, a quality that is evident from just the first track of the new album, “Answer Anything.” Here, Nantz sings “Break my arms and all my bones / Help me build them back up / Into the person that I was / When I was 21.” But despite the darker tone that reading the lyrics may suggest, the song itself is bright and quicker-paced than one would expect. In fact, most of the songs on the album share a similar element of carefree fun.

The climax of the record arguably comes just past the halfway point, in the form of “Buck”. It’s here that all three bandmates are really able to show off their intensity. “Reading messages you choose to ignore / Leaving clothes thrown around on the floor / I don’t do that / I don’t do that,” Nantz sings, across a chorus of catchy guitar riffs. But underneath the bubbly backup vocals and fun instrumentals, there is a deeper message to be found: Sometimes, it’s better to walk away than to fight to fix something.

Just above “Buck” on the tracklist, is “Repeat”, which exhibits a folkier, bucolic vibe. Close your eyes and imagine rocking in a hammock as a gentle breeze rolls over you — “Repeat” will take you there, as it shows a softer side to the group that hasn’t been previously explored.

Weller hits the mark with this new LP. The self-titled “Weller” impresses, not just as a first full-length, but also as a collection of poignant emotions, laid across a blanket of instrumentals that you just can’t help but dance along to.