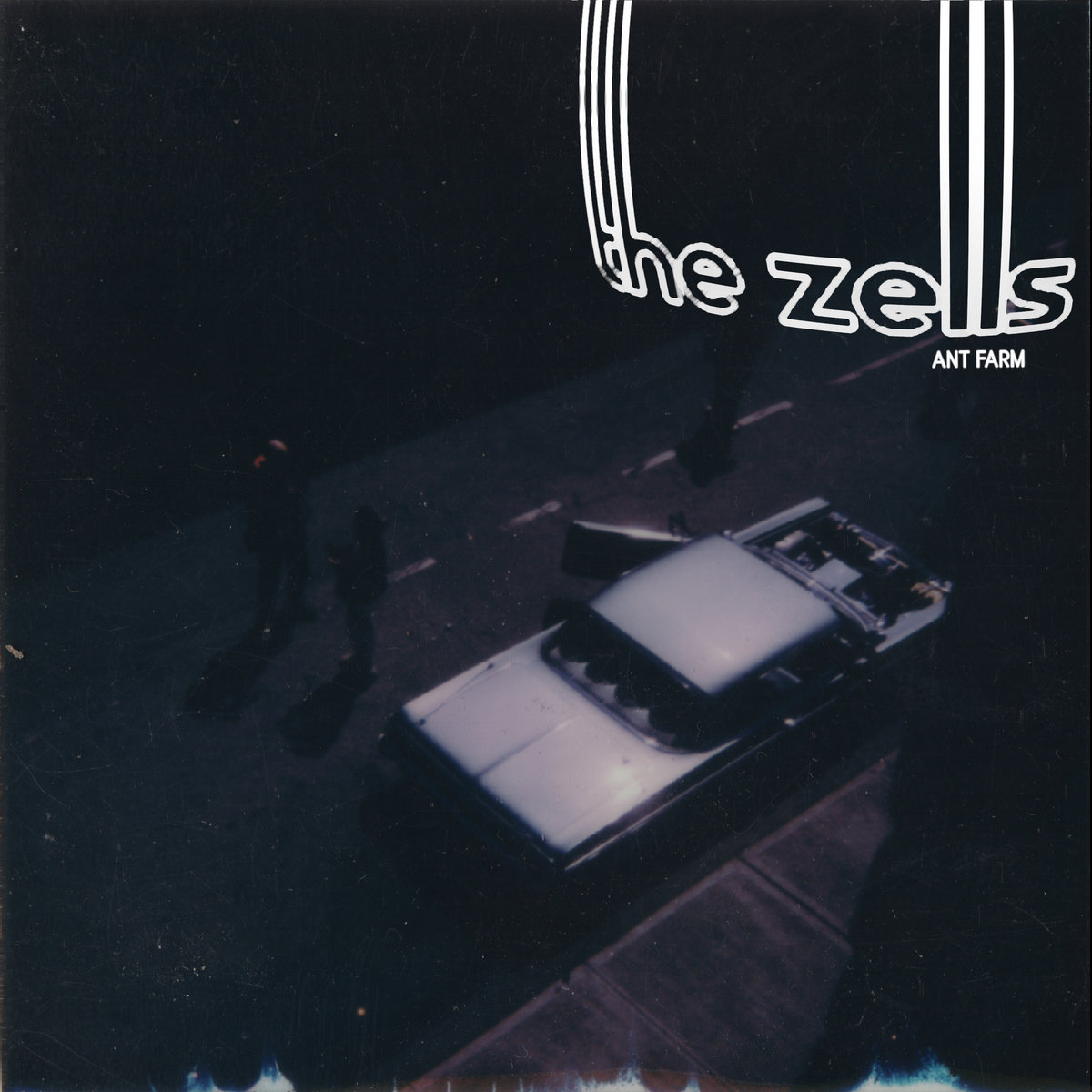 The Zells seem to exist between two worlds on Ant Farm, sounding at moments like a raw punk band ripping through lofi demos in a garage and at others like a seasoned “serious” rock band letting the guitars loose for intricate and dueling solos. The result is an album that straddles a sense of ambition and groundedness to find a balance matched by the lyrical themes of repetitiveness and stuckness that feel classic to this type of slacker-with-dreams rock music. Its fast and raw while also being tight and precise, and the acoustic tracks punctuating the more frantic tunes are far from interludes, as they result in some of the more gripping moments on Ant Farm, creating temporary calm amidst the chaos.

The record kicks into gear immediately with “Mankey” and “Dummy,” two ripping tunes that reflect the range of guitar sounds we hear on the record with loose, jangly rhythm guitars, some fat ass distortion on the low end, and piercing laserbeam lead lines. The lyrics confront the manic energy that comes with feeling stuck in place, whether metaphorically or not, with lines like “the house always wins and there is no way out / we might just rent until we die / while the pigs feed on the flesh of all in sight” and “going fucking crazy / this is shit, I’m gonna scream / I want to rip somebody’s head off but just feel really dumb.” While “Mankey” starts the record energetically, “Dummy” ramps things up another level with an opening riff that feels like classic pump-up music.

They’re followed by “Finnerty’s Dream,” which pulls the tempo and aggressiveness back for a bit of barstool daydreaming, with lines like “sitting at the bar / staring out the window  / I count the cars  / to pass the time  / when I’m alone” and “watch all the loops  / inside my head / stare at my phone” overtop of hazy instrumentals accented by the melodic bassline. Like a dream, the tune transitions in a surreal way, as the laid back vibes shift to a wild guitar solo that would almost be over the top if the band didn’t commit to it so well, with the guitars soaring to ridiculous heights before coming back down to earth. The tune makes a nice pairing with “Bryan Ray Trout, 1999,” a dream narrative of a 90s party packed with celebs like Skeet Ulrich (who “drank 12 beers”) and Rose McGowan (who likes the narrator’s haircut, but he’s “too fucked up” to talk to her). Lyrically, it’s one of the odder tunes on the record (meant positively), while musically, it’s one of the strongest, with every member of the band sounding active with the different parts blending together, and the hooks at “said she was tired of the people left in this town / everyone’s afraid to lose it all / and she don’t even want to be at this house / but they got blow” and “that stupid, wasted fuckin bastard started laughing / told me that my hands were really small / and after that, he tried to call her ‘baby’ / she said ‘Fuck you! My name’s Nicole’” are two of the most immediately arresting on the record.

With its repetition of “Sunday Morning / got me feeling / empty again / well I’ve been feeling / older all the time now / I’ve been feeling older / all the time,” “The Upside” feels like the real-life hangover following the dream party of “Bryan Ray Trout, 1999.” The tune starts with vocals and acoustic guitar accompanied by some light piano and hand percussion, while the harmonica creeps in about midway through in a way that recalls Springsteen’s Nebraska. Placed in between two of the more ripping and wild tunes on Ant Farm, it feels like a little two-minute nugget of acoustic gold amongst a rushing river of rock that is the rest of the record.

The group uses a similar juxtaposition later on the record, placing the eerie, fingerpicked “Call It Early” (ending with “these things take time / I’ll be fine / but in real-time / life can take you for a ride”) after the ripping “Hell Car.” With irresistible couplets like “you should be the president since everybody wants you to die / used to spend my whole life dreaming man, now I barely close my eyes” followed up by a melodic guitar solo, the track brings you to one of the album’s high points before pulling back for its most reserved moment on “Call It Early.”

“JME” joins “Hell Car” to bookend an impressive run of tacks between the two acoustic tunes, featuring one of the more relentlessly driving instrumental feels, equalled by the lyrical mindset as the line “now there’s nowhere left to go / just suicidal ideation and snow / it’s all we’ll ever know” is followed by the record’s wildest guitar solo. The tune doesn’t pull back after the solo, stretching over 5 minutes and ending with one of the stronger lyrical moments as “you better get a grip / cause you ain’t changing shit / no need to face your fear / we’ll take it all from here / buy our 80 dollar pills / ignore electric bills / close your eyes and count to ten / and never ask again” is delivered over an increasingly unhinged and tense musical run.

With it’s funky, off-kilter guitar line echoed by the bass in the verse, “Truther Uncle” makes its presence known between the fast-paced “JME” and “Payday,” echoing the hazy, dreamlike feel of “Finnerty’s Dream” with a bit more edge this time. The manic and heavy riffs on “Payday” from a nice clash with more breezy, laid back verses where lyrics like “paycheck clears at 12:43 / I’m getting fucking loaded / I don’t mind, I don’t mind, I don’t really mind” are backed by delicate doo-wop “oohs,” making it another standout on the fantastic second half of Ant Farm.

Album closer “Hard Reset” ends almost in an abrupt way, as if the band stopped right before adding the last coda, letting the last “it was only just to show me she don’t owe me anything” hang in the air with the final chord. It makes sense as an ending for a record that’s as high-reaching as it is deliberately raw, finding moments of odd beauty and escape amongst the noise and repetitiveness of everyday life.

Ant Farm is out today on Crafted Sounds.