Home  >  Album Review: The World Is a Beautiful Place and I Am No Longer Afraid to Die – ‘Illusory Walls’

Album Review: The World Is a Beautiful Place and I Am No Longer Afraid to Die – ‘Illusory Walls’ 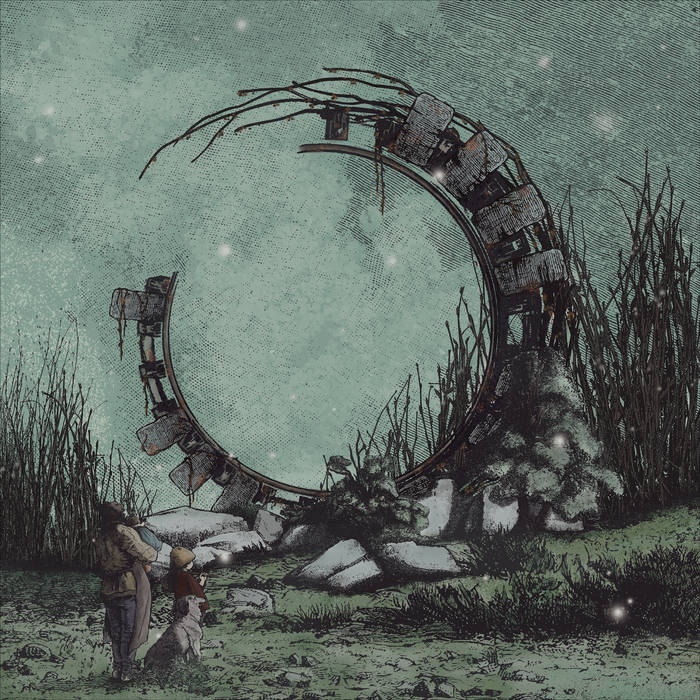 It’s funny to think back on The World Is a Beautiful Place and I Am No Longer Afraid to Die’s debut LP from a 2021 vantage point. In 2013 the band was still primarily a New Haven band, not a Philly band, and they were called emo before indie rock or post-rock or whatever else people are calling the five-piece these days. (They also had, like, double that many members.) Whenever, If Ever, with its unpredictable stylistic shifts and literary songwriting and three to four vocalists per song, was more or less the album to critically legitimize the emo revival, which had before that point been confined mostly to bars, bedrooms, and basements. There was magic in the band’s early work — it was there even before they’d put out a full-length — in the way songs contorted themselves and shot off in totally unexpected directions, in the way a synthy hook could lead into a screamed verse into a gorgeous flowing instrumental coda; the whole thing felt loose, spontaneous, and unrehearsed.

The World Is is no longer that band, of course.

Their history since needn’t be retread, since the various splits and lineup changes and the way their 2015 follow-up, the expansive Harmlessness, seemed to eclipse even Whenever, If Ever. In retrospect, that record seemed to herald the end of that wave of emo music; seminal revivalist groups like The Hotelier, Modern Baseball, and Empire! Empire! dissolved in the years between Harmlessness and the next World Is LP, 2017’s Always Foreign, a record that was divisive for its apparent jettisoning of the post-rock elements that had marked previous releases in favor of a streamlined, more accessible sound. With four years passing between LPs, and with the release of a rarities compilation in 2019, and with an unprecedented pandemic throwing ravaging the planet, the band’s future seemed uncertain. But now, a couple weeks after the release of Illusory Walls, it should be clear that The World Is has lost no steam – on the contrary, they’ve just put out their most meticulous, most carefully crafted, most cohesive, most ambitious, and most viscerally affecting LP yet.

Over its seventy-minute runtime (the length of two Whenever, If Evers!) Illusory Walls dips into toes into every style the band has ever attempted, stitching midwest emo to post-rock to pop-punk to ambient to post-hardcore, and adds to the mix a helping of aggressive progressive rock a la Circa Survive or Coheed; because this is still The World Is, there’s also a smattering of sky-high hooks for anyone who thinks the whole thing sounds like way too much. It’s forgivable to think, after the record’s first six minutes, that the record will be a sensible follow-up to Always Foreign; the intimate and delicate opener “Afraid to Die” recalls a beefier take on that record’s first cut “I’ll Make Everything,” building to a similar sweeping and grandiose climax, and the way it leads into the synthy, hooky “Queen Sophie for President” recalls the way the crescendo in “I’ll Make Everything” flows into the synth-led pop-punk barnburner “The Future,” down to the vocal tradeoffs on each song – while David Bello sings on both “Afraid to Die” and “I’ll Make Everything,” he hands the reins off on the second track of each album; on “Queen Sophie for Pesident,” it’s to keyboardist Katie Dvorak; though she’s been in the band since 2012, Illusory Walls is the first record of The World Is’ to really utilize her powerful voice the way it deserves to be used.

After “Queen Sophie,” though, the record takes a hard left turn and it becomes clear that Illusory Walls will not be following the path laid down by more accessible Always Foreign cuts like “The Future” or “Dillon and Her Son” – nor, for that matter, will it return to the more atmospheric style of Whenever, If Ever, or the heavily ’90s-inspired Harmlessness sound. Instead, Illusory Walls goes places previous World Is albums hardly even gestured; the opening riff of “Invading the World of the Guilty as a Spirit of Vengeance” is immediately the darkest and heaviest of their catalog, and it only gets more so from there. The song’s booming chorus features some of Chris Teti’s showiest, most impressive guitar work to date and, in true World Is fashion, just as the song reaches its grittiest, most aggressive point, the band dials things back and swaps out the thick riffs for haunting drones before allowing the song to build itself back up. Remove Bello and Dvorak’s vocal interplay and the song would be pegged as post-metal a la Pelican or Shy, Low without a doubt.

The middle section, sandwiched between the two “Blank” interludes, is where the band most fully commits to their newfound heaviness. The shambling, dreamlike “We Saw Birds Through the Hole in the Ceiling” at first recalls the airiness of Harmlessness‘ middle run before a discordant riff tears the song apart and it ends as the most chaotic, most pummeling, heaviest piece of music in their entire discography. The seven-minute behemoth “Died in the Prison of the Holy Office” follows suit, oscillating between flowing verses and a pulverizing chorus, while “Your Brain Is a Rubbermaid” is a post-hardcore song masquerading as emo, an infectious vocal performance from Dvorak the only thing keeping the song from feeling outright metallic.

But it’s the record’s final third that ups the ante for the band; they’ve never been strangers to ambition or to very long songs – each of their full-lengths has at least one song seven-plus minutes in length, and all have others that stretch well past five minutes long. The last two songs on Illusory Walls, however, eclipse all the others, totaling 35 minutes between them.

The first, titled “Infinite Josh,” is a neat (if not particularly succinct) summary of the LP, a twinkling post-rock ballad that twists and contorts itself into a pulverizing post-hardcore track and then checks both boxes at once for its final minutes; for the first half of the song, the thread is held together by the repeated line “everyone says you can’t go home again”; before shifting gears midway through (read: getting much heavier), the song trades off two hooks, that line and a verse that will recur in the song’s final minute to signal the transition to “Fewer Afraid”: “the objects we’re locked in, immobile and violent / just fewer like that, fewer afraid.” It’s a tremendous song, and that it’s able to hold together as well as it does is a testament to the band’s craft. It is, however, unfortunately immediately overshadowed by an even more hulking behemoth.

If “Infinite Josh” felt like a summation of the album musically – and really a summation of the band’s career, beginning as sweeping post-rock, traveling through post-hardcore, and ending somewhere between both – then “Fewer Afraid” is a summation of the album, and the whole journey of The World Is to this point, thematically. The first three minutes of the song find the return of Chris Zizzimia, the spoken word poet whose collaboration with the band on 2014’s Between Bodies remains the band’s most contentious release, reciting his poetry over swaying drones; that the band embraces that controversy on this song speaks to their ethos, their embrace of all the bands they used to be.

When Bello begins singing, he is greeted with strings that fill the track out, and what follows is essentially five straight minutes of buildup (featuring some of Bello’s best melodies yet) to a reprisal of the climax of Harmlessness closer “Mount Hum”: “come on and fall so that I can pick you up / our homes are not the kinds of places you’d own,” Bello croons over some of the LP’s most technical riffing; the band swells triumphantly before segueing into another reprise, this time into that verse that closed “Infinite Josh.” The song at this point effectively restarts, and Sarah Cowell, formerly of likeminded but eternally underappreciated weirdo indie rockers For Everest, delivers some of the record’s frankest lyrics: “you believe in a god watching over / I think the world’s fucked up and brutal / senseless violence with no god in mind / I can’t live like this but I’m not ready to die.” Their vocal contribution leads, appropriately enough, into that verse that’s become the band’s de facto mantra – the verse that ends “Getting Sodas,” the seven-minute closer of Whenever, If Ever:

The world is a beautiful place

But we have to make it that way

Wherever you find home

We’ll make it more than just a shelter

If everyone belongs there

It’ll hold us all together

If you’re afraid to die

As much as it calls back to the band’s old material, it serves too to show how much they’ve changed. The verses that led to that one on “Getting Sodas” were far from the doomsaying that marks Cowell’s verse on “Fewer Afraid.” Quite contrarily, they speak of finding solace in the darkest parts of human experience: “When our bodies fail / we’ll find joy in the peace that it brings / when our voices fail / we’ll find new ways to sing.” Indeed, Illusory Walls is the record that best embodies The World Is’ debt to Godspeed You! Black Emperor both musically and lyrically; the band has grown increasingly political in their lyrics since Bello joined the band, with Always Foreign‘s anti-Trump “Faker” and “Marine Tigers” being the most overt, but on Illusory Walls, Cowell’s seemingly nihilistic outlook is the rule, not the exception. On “Queen Sophie for President,” Dvorak sings, with an ironic joy, “never get better and never do anything“; the record’s two “Blank” tracks, appropriately subtitled “Drone” and “Worker,” address the plight of an ever-growing working class under the boot of increasingly omnipotent corporatized society – the latter even includes a prayer to DuPont. Thematically, Illusory Walls is bleak and barren; where Always Foreign supplanted its politics with polemics against racism or cries for solidarity, its followup mostly shrugs its shoulders, resigned to the wreck. On the very first line of “Invading the World of the Guilty,” Bello snarks, “I crave more luxury disposables.” There is, evidently, no stopping what’s coming – might as well enjoy it. Illusory Walls‘ apocalyptic soundscapes are matched with a vision of a world already staring down the barrel of terminal decline.

But it’s telling that “Afraid to Die” opens the record. Bello and Dvorak, in the song’s cacophonous last seconds, harmonize: “We’ve got pictures in our heads / nostalgia without regret.” There’s a hope for something better somewhere, however deep down it may be buried. That “Getting Sodas” callback seems to confirm it. Whatever dire straights the world may appear to be in, there still exists the capacity for beauty, for love. But it won’t be delivered from on high; a German philosopher wrote somewhere of a world to be won, and the world that The World Is is building is a world that can still be made. They just can’t make it on their own.